Sorry for no post until now, but I was extremely tired, and I could not manage to work on the pictures. But let me continue from the evening of the Prologue. I was almost kicked out of the Press Centre at 23:00, because they already started to disassemble the set-up (killing the internet connection and turning off half the lights is an international way to say that you are expected to leave now – but I was not the only one still there at that time). Speaking of them, they were cheering for the Spanish team (on the World Cup quarter-final game against Paraguay) in a vary loud manner… So accredited personnel are humans too :) 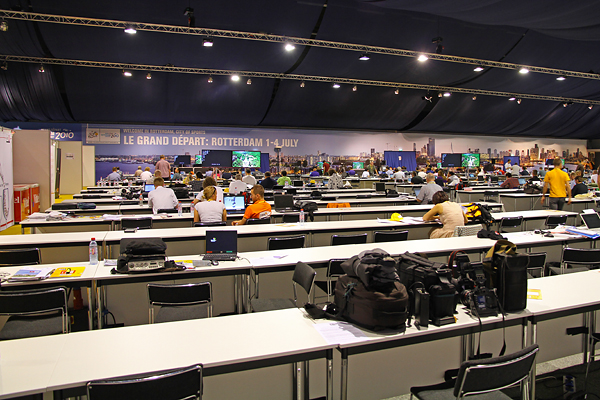 But to turn back to my story, I left the building and started my all-night-long journey in the city. I did not book a hotel or any accommodation for the night, because my train tickets were already expensive, and 2 weeks before the Prologue (when I had received my accreditation) all the cheaper hostels/hotels were already completely booked. And I thought I am young, so one night without sleeping should not be that hard :D It was not THAT hard, but it was not easy. Anyway, at least I had time (and a lot of it) to walk around the second largest city of the Netherlands. And Rotterdam turned out to be very cool to me. I really love the bridges and the modern buildings! The Erasmusbrug is the most amazing from all of them. 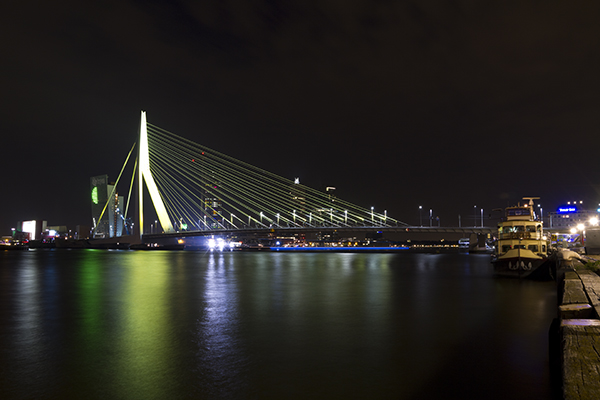 I walked around the following areas of the city: Centrum, Noordereiland and Wilhelminaplein, while the Press Centre was in the Ahoy to the south. Based on my memories and calculated from the maps I have, I walked at lest 36 kilometers in Rotterdam while I was there. And my backpack with the equipment and laptop was around 8 kg, so you can make the rest of the math yourself. But after sleeping a half hour at the train station (uncomfortable) and in the McDonald’s (loud), I felt much better, so I went for another walk around sunrise (and I have seen noctilucent clouds too!!!). Honestly, I think this city is an amazing architectural showroom. Panorama of the skyline from the Willemsbrug:

My PRESSE card (the coolest Tour de France souvenir one can ever get!): 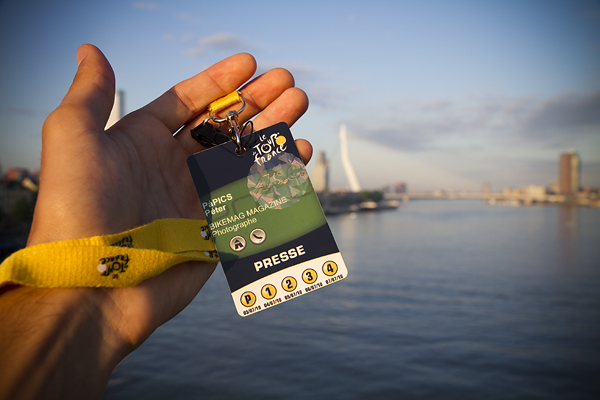 And some other selected images about the city: 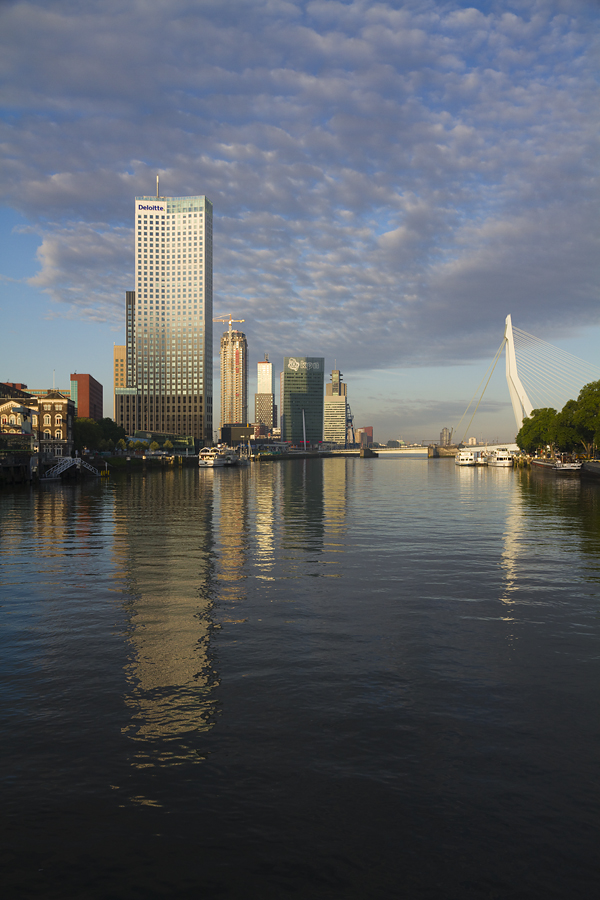 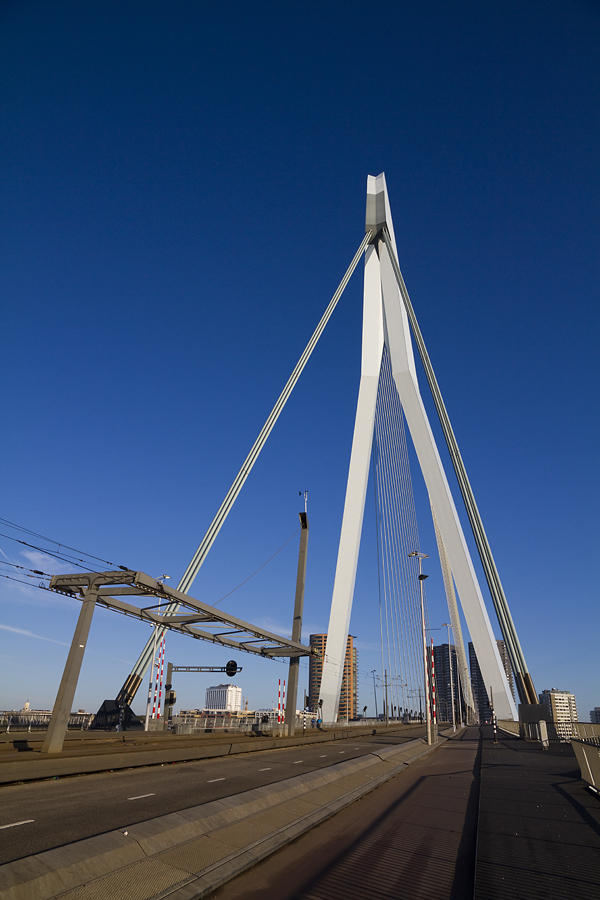 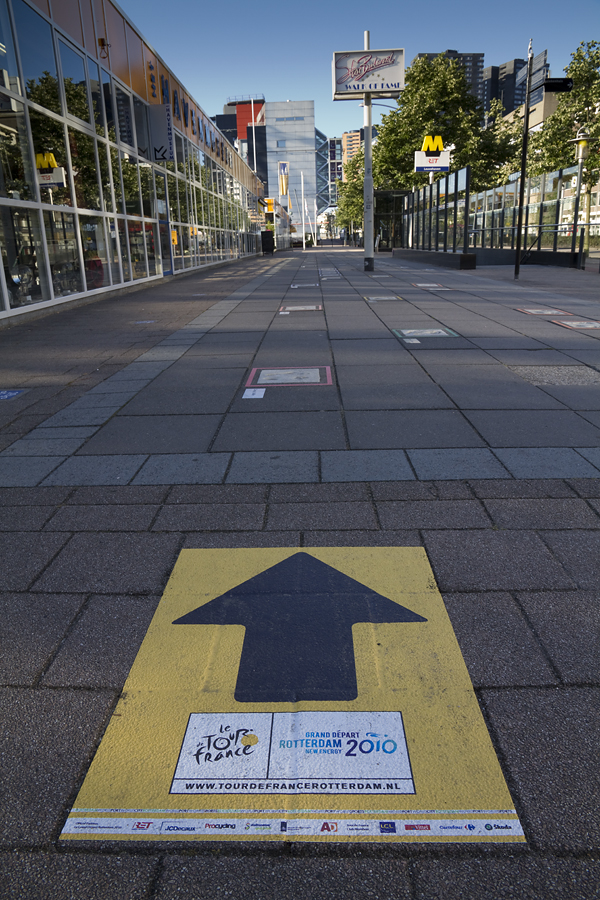 So after I had taken pictures of the Erasmusbrug from every possible angle, I went to the corner of the Westerlaan and the Westerkade, from where the 1st stage supposed to start around noon. This was at 8:45, when the Tour de France village opened. (Minor comment: if you install mobile toilets, make sure that you refill the tap-water for those crazy foreigners, who may want to wash their hands after using their nice WC… Luckily I found a fountain nearby…) 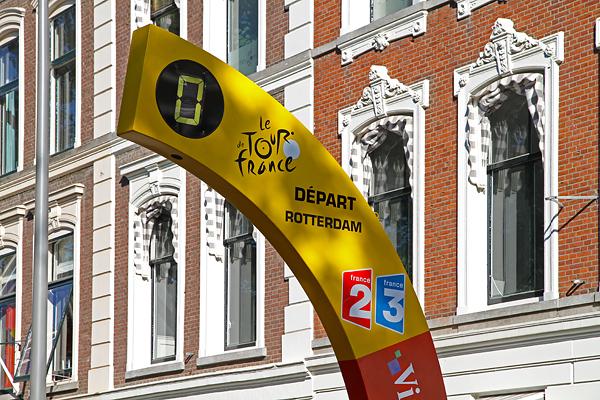 After I considered my options, I took a place in the first row outside the closed area (which I could have entered with my badge if I wanted), because I knew it would be too crowded inside, and the view to the podium where the riders had to sign in would have been even worse from a closer distance (the “desk” would have been in the way completely). At this point, I have to share my opinion about photographers and journalists on the Tour. They are too many. Especially around the start and the finish. The organizers should restrict the number of people allowed into given areas (it is only done just behind the finish line), because I have the feeling, that we arrived to a point, where everyone has to fight already for taking a picture, but there is literally no space left to have a well-composed, decent photo. So we end up with a lot of crappy pictures instead of a few quality ones. (Of course this way there is a bigger chance to have something unique, but that’s all.) And I really do not understand why do we need so many journalists on-site. I have seen several reporters discussing the key events of the race based on rumors, when just watching the live coverage could have given the full picture about the stage to them… This is really scandalous… The only thing which was worse, is the distribution of press-release printouts in the Press Centre. Come on, this is the 21st century, what shall we do with printouts? Send the news updates around on the internal network, or something, because a printout can only be used on the toilet. Anyhow, you get information from the riders themselves on Twitter much faster… But back to the 1st stage. First the Publicity caravane passed by (long line of cars representing all the sponsoring companies), then the first cyclist started to roll in for the signing in (see Aleksandr Kuchynski arriving below). 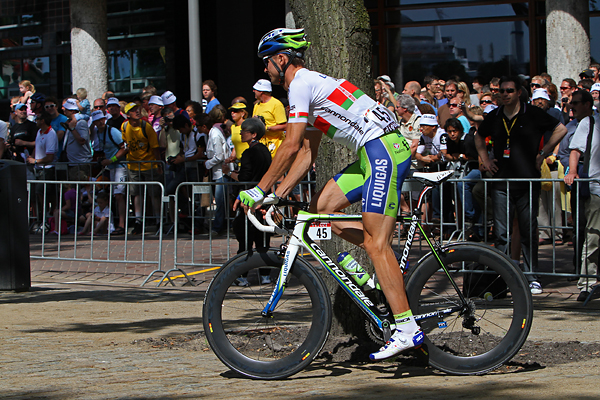 Then they had to walk up to the podium, and sign in for the stage. The speaker introduced everyone, and some “random guys” even got some extra information (OK, FYI it is Lance Armstrong on the pictures). 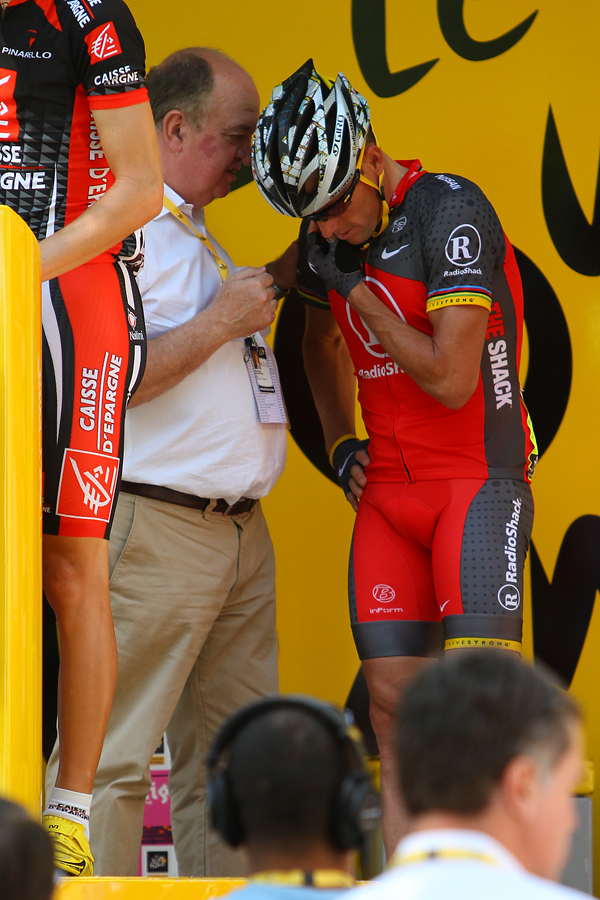 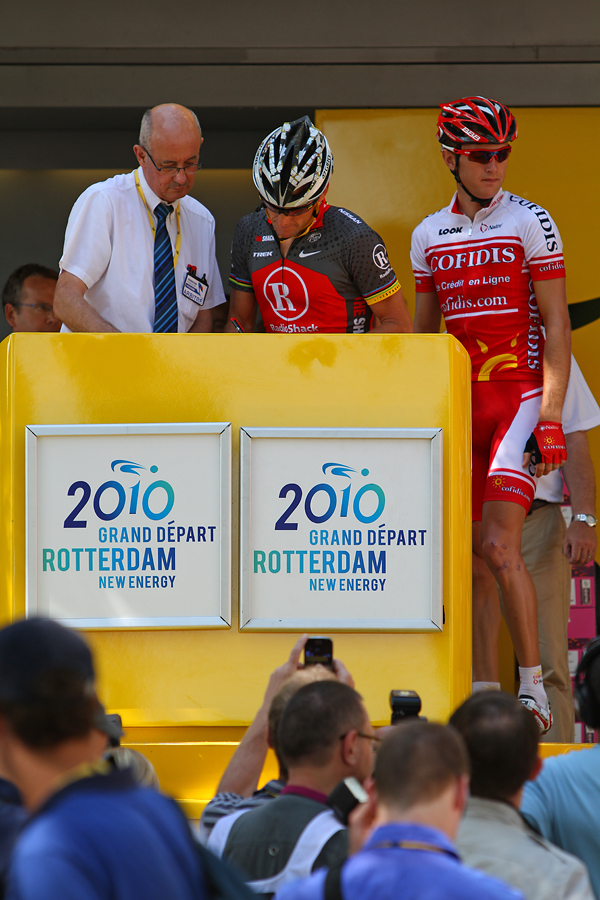 At the beginning there were only a few riders every minute, but after a quarter it got really crowded… Some other big names signing in on the next photo (Fabian Cancellara in the yellow jersey after winning the Prologue on the previous day, and Frank Schleck in the “Champion of Luxembourg” jersey). 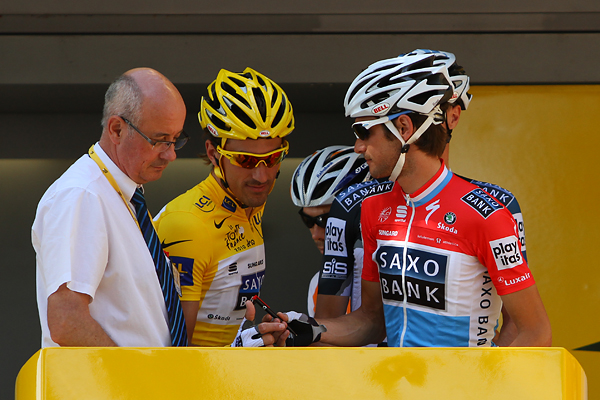 After placing their signature, they waved and stepped down from the podium. Some of them hope to be on another kind of podium later on this year’s Tour de France, like Alberto Contador (from Astana) below. 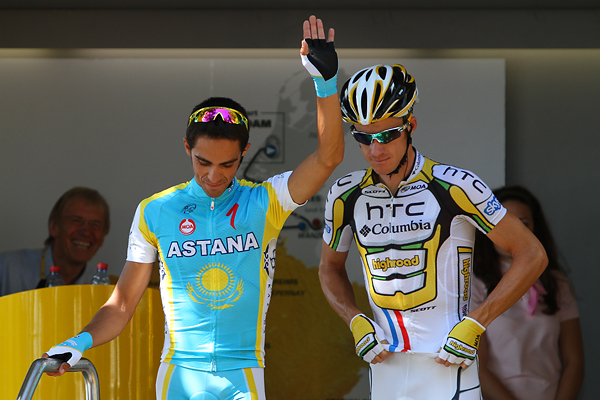 Then they could pick some energy bars and gels from the selection of PowerBar (Alexandr Pliuschin from Katusha Team and Gerald Ciolek from Team Milram). 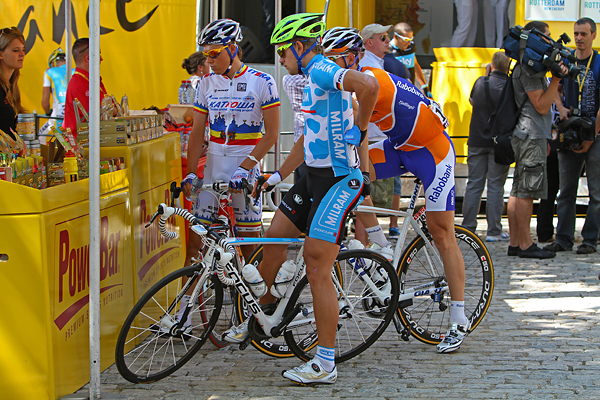 Some guys (like Ruben Perez Moreno here from Euskatel-Euskadi) even made some final adjustments on their bikes too :) 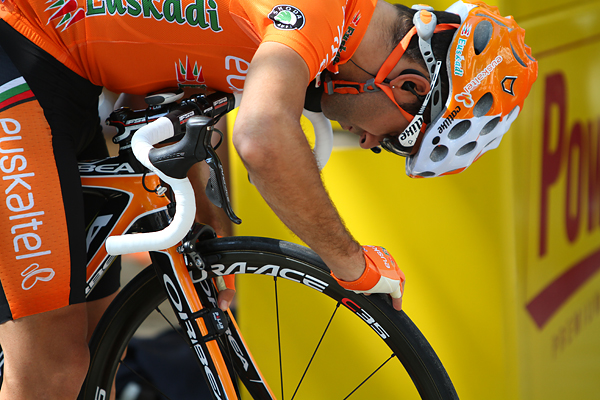 Then they left towards the start line (Levi Leipheimer here). 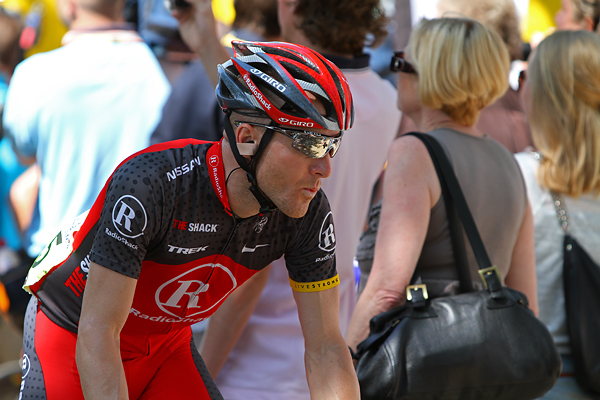 The guys are waiting for the start (with Gregory Rast in the middle). 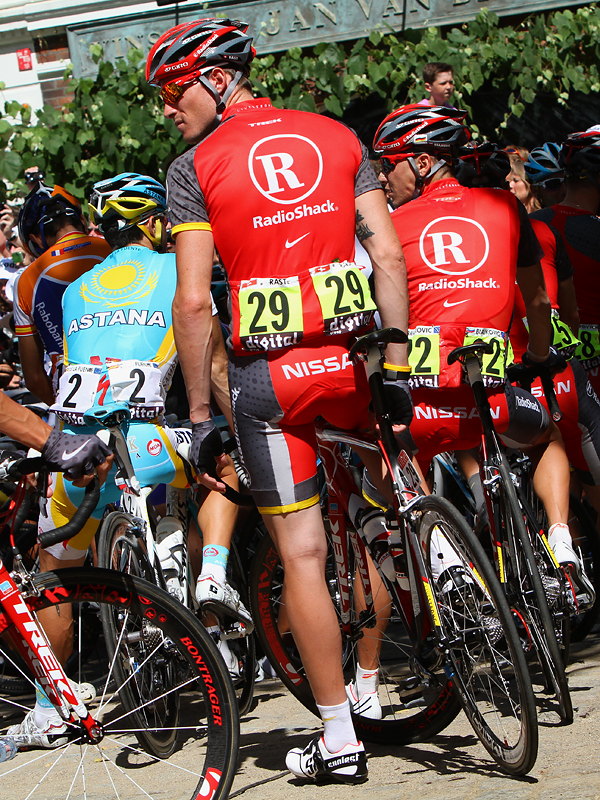 The unofficial star was at 11:50, this is the time when the Peleton starts its journey towards the official start (it is a bit like the warm up lap in F1). 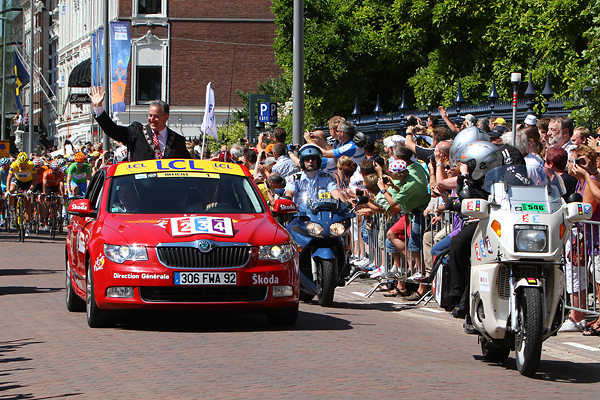 The pack was led by Ahmed Aboutaleb, the mayor of Rotterdam. (He had to sign the official start by waving with the white flag.) 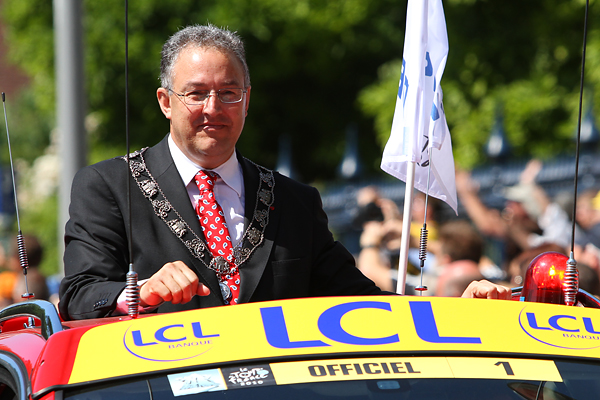 And then came the riders, led by the holders of the important jerseys (Fabian Cancellara in yellow, David Millar in green on the right and Tony Martin in white on the left – at the start of the 1st stage). 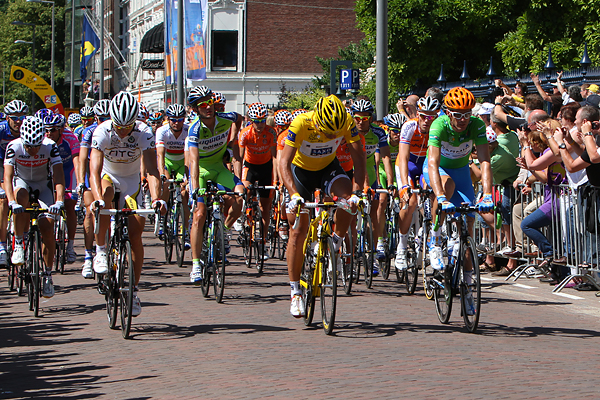 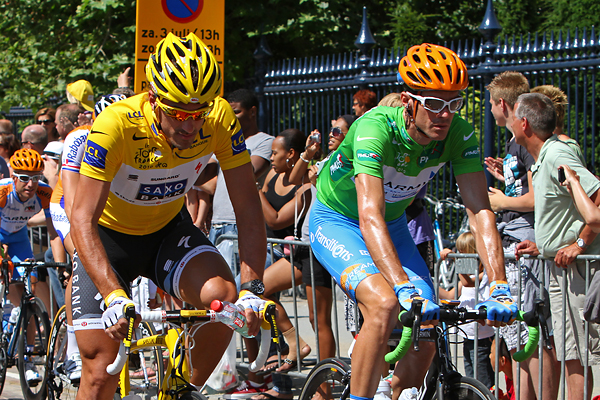 And after this point, I have not seen anything :) This is the downside of being there “live” at the Tour de France. They pass by you, and then au revoir. I had two hours till the departure of my train, so I walked back to the McDonald’s for some junk-food, and had a small sleep at the station (waking up to my alarm clock 10 minutes before the arrival of my train from Amsterdam). Then I was sleeping on the train too, and even though I set my alarm clock to the arrival time in Brussels, I woke up twice thinking that I had missed the capital and that I was already on the way to Paris :D Luckily this was not true, and I managed to get off the train in Brussels. Then I took the metro to the Heysel station, and walked to the finish line. Now I entered the restricted area with my pass, but I could not take a place behind the finish line, because that was reserved for selected photographers. (I do not know how they do the selection – as the guy who tried to tell it to me spoke only French -, but I do not really care now…) 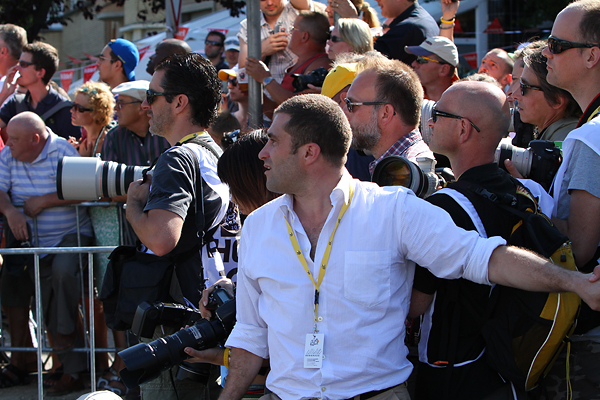 Still I managed to take a picture of the winner (Alessandro Petacchi) right after crossing the finish line, so I am quite happy about this day too. 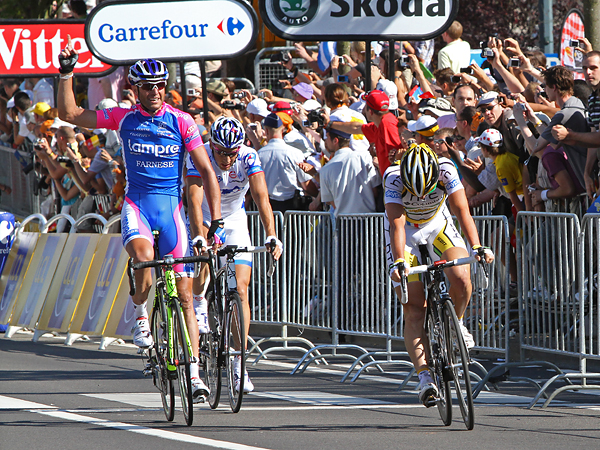 Here at the press area I even saw the last 25 km of the race on TV, which was installed there for the media representatives. Then I left the street of the finish with the cyclists, really just casually walking right next to them! I tried to stay calm and professional, but I was dancing and shouting inside :D At the bus of Team RadioShack I met some Hungarians too, who were there to see Lance of course. At the end I just went back to Leuven as fast as possible, then I had a dinner in Domus (my favourite casual place in the city, but this was the first time that I went to eat alone), because I was too tired to prepare anything. I went to bed at 23:00, 41 hours after I got up on Saturday morning…