The 6th (last) night of observing with the IAC-80 did not turn out well, as in the first half of the night it was raining heavily, and when it started to clear up in the second half, then the wind speed rose (50-80 km/h) well above the safety limit (45 km/h) of the telescope, so I could not even open the dome. This way I ended up with 3 clear night out of 6, which is much worse than my typical ratio. But as staff member told me, this autumn was exceptionally crappy until now compared to what is usual at the Observatorio del Teide, so I was lucky that I could observe at least on half of my nights…

On Sunday, I got up a bit erlier (1 PM), because I wanted to use my last day for a big cycling trip. So I first had the longest decent of my life (with 0 cars overtaking me – but that is normal on the way down, so do not start freaking out about my speed please), then after reaching the sea, I turned back, and had the longest and highest climb of my “cycling career”. It was a truly epic climb. I started at 50 m above sea level (ASL) – that was the closest I could get to the water on the road -, then the climb went on almost uninterrupted for 42.2 km till I reached the highest road of Tenerife (which is a private road of the Observatory, so if you are not an astronomer, then the top is a bit lower) at 2360 m ASL. This gives an average slope of 5.6%. 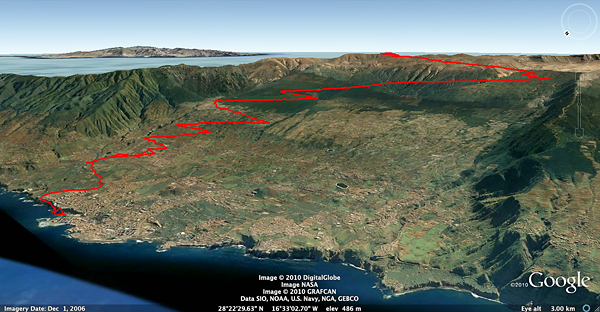 Remember, this lasted for (exactly) three hours, so in Tour de France terms, this is a HC (Hors catégorie) climb – mainly because of its length and partly because of its steepness. Now the cloud layer was thin and low (between 650 and 950 meter ASL), and the weather was perfectly clear and sunny above (I used my sunscreen every day when I rode my bike), while hot and humid below. There was a part (Calle del Risco Caido) in La Oratava, where the slope was generally between 10% and 14% for 750 meters (with a maximum of 22%) – now that was a killer, I had to stop twice (and this was at 5 km into the climb at 300 m ASL in almost 100% humidity and 27°C). After that, I took only very short (1-5 min) breaks at 1000 m, 1400 m, 1700 m, and at 2000 m ASL before I reached my destination. (GPS details here.) 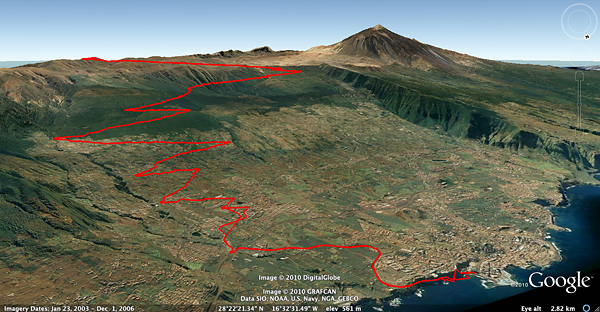 By the time I arrived back to the Observatory I was a bit exhausted (and covered with a surprising amount of salt), but extremely happy, because a month ago I was not even sure if I am able to do such a climb at all. This was the first time for months that I really felt tired (from physical activity and not because of working till midnight)… The one hour which I had to wait until dinner seemed really long (luckily I could skype with someone, thus time passed a bit faster). I managed to do the climb with three 0.75 litre bottles (so no use of the hydration pack which I brought with myself especially for these days…), and only an energy bar and an energy gel. So being a bit hungry afterwards was not a surprise. (I had more food with me – do not worry -, but I did not need it on the bike.)

Then on Sunday evening, packing everything in was again a struggle – I really hate it. Finally after three hours of sleep, I took the taxi to the airport where the largest plane crash took place in history (Tenerife North). But now the weather was sunny and crystal clear (amazing views along the road down from the Observatory), nothing like the foggy day when the accident happened. After a 30 minute flight (on board a Binter Canarias ATR-72) we landed on La Palma, I took the taxi (the second one, because my bike box did not fit in the first :D) up to the Observatory, and now I am here :) Good to be back! In the next two days, till my observing run starts, I will make small modifications to my article according to the comments of my co-authors.