After a day of resting, and seeing bikes only on the television, I hit the road again on Friday. The plan was simple: bike around the island. This does not give you too much freedom of choice, because there is basically only one way to do this. I decided to go in the ant-clockwise direction, so I could complete the hardest parts first, and by the time I get tired, only the easy climbs or downhill sections are left to be done. I left around nine (if I remember correctly), and took the LP-1 road towards the North. The weather was not too nice, but based on the satellite pictures I have seen in the morning, I was expecting some sunshine on the western part of the island later on. After a short climb and descent, I have arrived to the first categorized section of the day, starting at the 4.05 km mark, it was:

Basically the first 4 kilometers are hard, with an average of 8% (and some tunnels through the ridges), then the rest is almost flat. But to make it more difficult, halfway into the hard part the rain started to fall, so I had to stop and put on my rain-cover. It lasted for only a quarter of an hour, and luckily this was also the last part I have encountered precipitation during the day. From here, there was a nice descent with views to the sea, with a short climb somewhere in between. There were also road works here and there, so sometimes I had to wait at the red light, because half of the road was closed down. Then starting in Los Sauces, at km 23.7 came the longest climb of the day:

It is a long climb, but not too hard (the steepest kilometer is only 7.8%, and there is no other over 7%). I knew the rod till Barloveneto from last year, but back then I continued on LP-1, and now I took a smaller road (LP-111) which goes a bit higher up. This was a really nice part, with perfect road quality, only one lane, small and dark tunnels through the steep ridges, and with a real rainforest around. 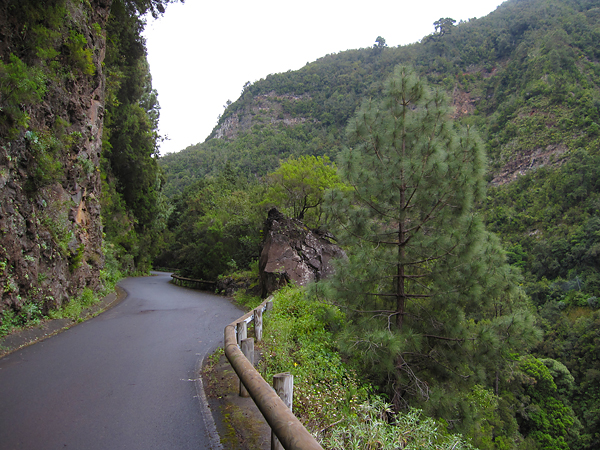 At least it looked like a rainforest while I was riding in the cloud layer, with near 100% humidity, wet road, and water dripping from the trees. I even made a small video at this point :) Oh, and there were basically no cars here! After I have reached the top of the climb, there were still thee shorter uphill sections (with short descents in between), with gradients of 13-15%… The third (and last one) of them even got categorized, starting at 55.75 km:

So soon after hitting the 60 km mark, I already had more than 2000 meters of elevation gain in my legs, which was pretty reassuring given that it was almost 2/3 of the total, while I was not even halfway into the total distance. (Yes, the first part was pretty hard.) I passed the point where last year and two days earlier I turned left to climb (or continue to climb) up to the Roque, but this time I continued straight on. Soon the highly anticipated descent started (with lots of curves in the first part, where my brakes were really loud for some reason), and the sun appeared from behind the clouds too! 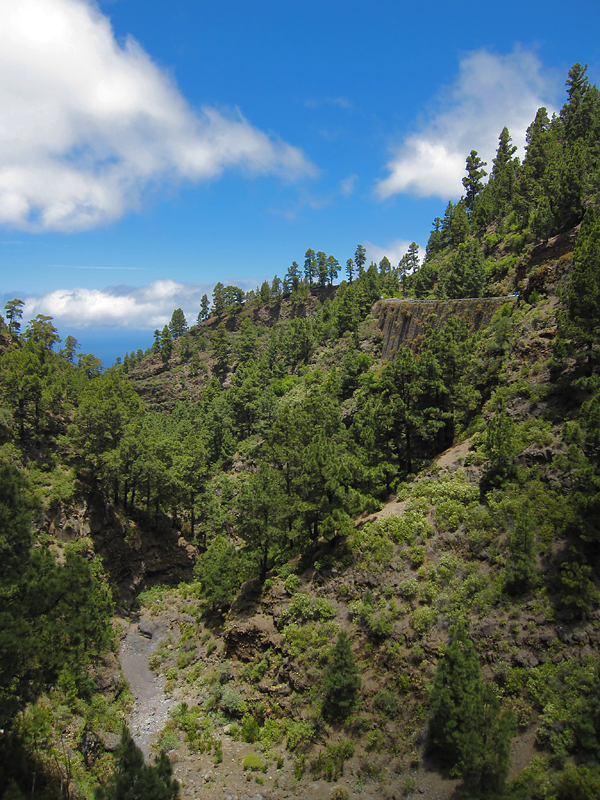 It was almost continuous descent from an elevation of 1200 meter to 100 meter (except for that tricky climb gaining ~200 meters in elevation in the middle), through really nice landscapes, and really great views down towards the sea in the valleys. 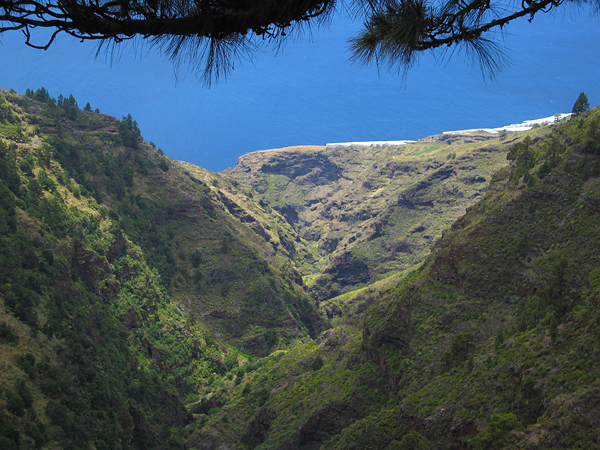 One of the most interesting sights was the El Time lookout point, on the edge of a huge canyon which connects the port of Tazacorte with the Caldera de Taburiente. In optimal conditions, I could have just looked up all the way to the Roque de los Muchachos, but unluckily now it was hiding behind a massive layer of clouds. Still the view to the canyon and the curvy road down to its bottom was quite spectacular. 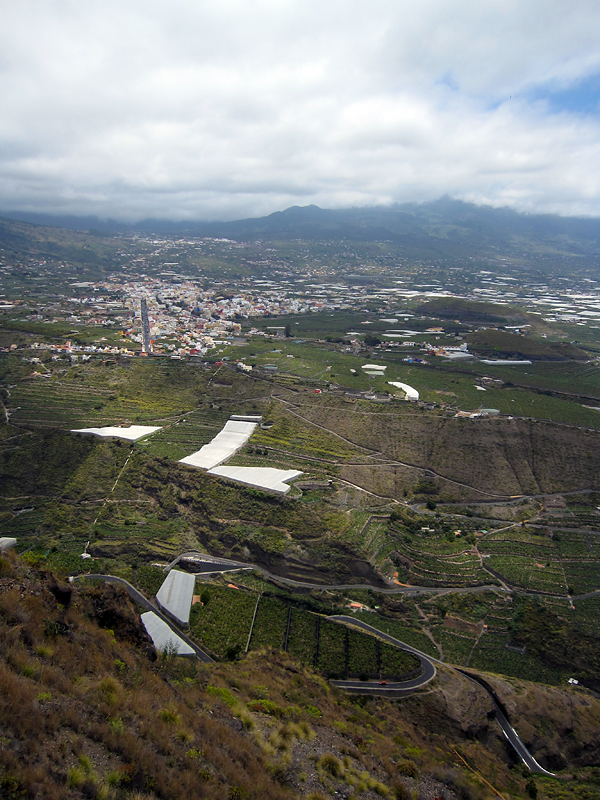 It really is a shame, that the weather was not better. I bough some water in the restaurant here, then started the descent. It was a really great roll down, with the road cutting through the steep rocks which were standing high along the sides and in the bottom of the canyon. Then immediately after reaching the lowest point, the next climb started at the 94.32 km mark:

With only the first 4 kilometers having a steeper gradient than 5%, and the rest typically around 3%, it was an easy climb, though the headwind and the fact that I already had lots of kilometer and climbs in my leg made it slightly harder than it might seem to be from the plain numbers. I biked through banana fields, then the colorful city of Los Llanos, from where I continued my journey on the LP-2 road. At the final kilometers of the climb, I reached the famous lava flows (of course they are not really flowing anymore) of this (southwestern) side of the island. 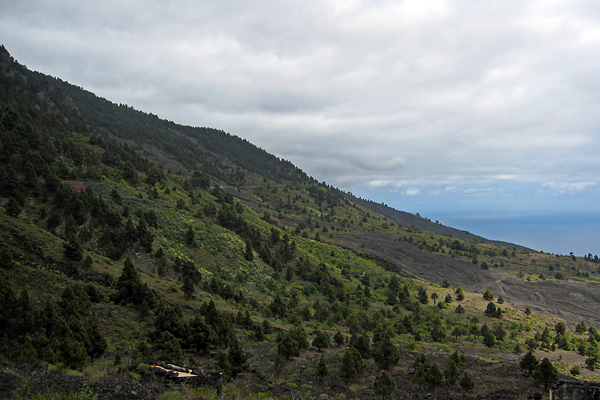 This was again a memorable part of the day, with not just the grey volcanic rivers of rock, but also the rich vegetation around. 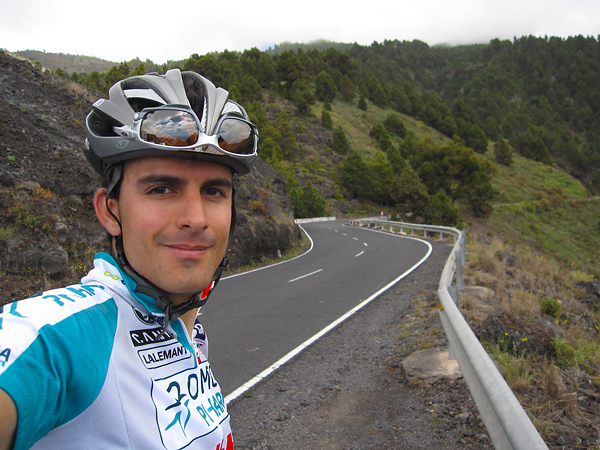 Pine trees, cacti and colorful flowers everywhere. Also the road quality was nice, and the car traffic was extremely low (as it is in general on La Palma). It was really interesting to see how the lava flows solidified, preserving the shape of collapsed channels all the way down towards the sea. Then the road turned downhills towards Fuencaliente. From there, I took the same road back to Santa Cruz as on my first ride. I even had a bit of sunshine at one point! 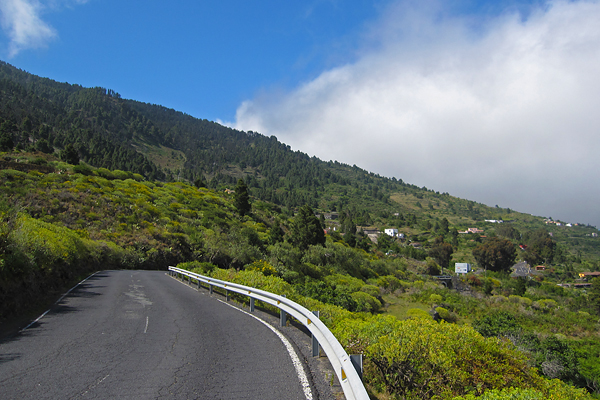 Then I stopped once in Villa de Mazo, because there was a nice view towards Santa Cruz, from just below the cloud layer. It is shocking how deep blue the ocean looked as the clods were only staying above the island, so the reflection of the sky was visible on the open waters – and the fact that the water surface was lit by sunlight made the contrast even bigger. 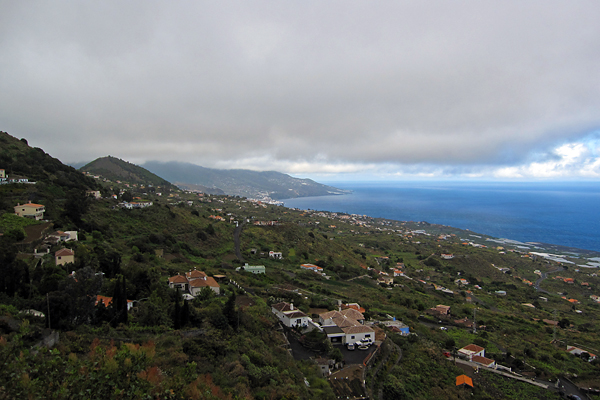 Also the airport was well visible from this point. Then on the last descent (the curvy road along the remnants of an old caldera just above Santa Cruz – I have climbed it on Day 1, and then on Day 4 again), when I was already happy about accomplishing another big ride, in one curve three dogs started running towards me while barking loudly, so I got a half heart attack meanwhile I was trying to avoid running into the dogs… It was a quite close call (and I can only hope that the Spanish lady was shouting “leave him alone” to her dogs, and not “catch the cyclist” :D). 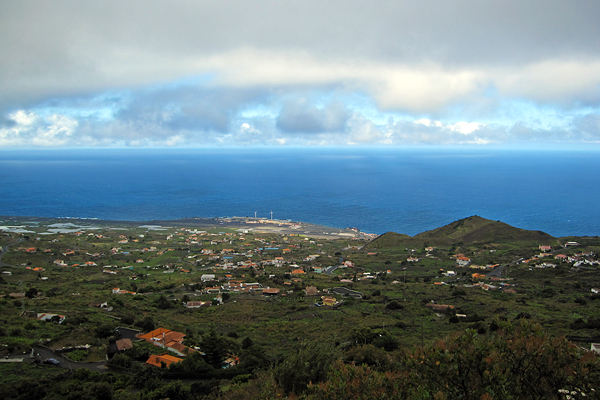 So I arrived back to La Palma after 154.1 km and 3246 m of elevation gain. It is really amazing, that I just rode around the island and still I had more than three kilometers of elevation gain. No wonder La Palma is known as the steepest island of the world. Even if you go around, you can not just follow the shoreline, because sometimes even the lowest road has to go over a 1000 meters in elevation, to make it through a lava flow, or a gorge, or a ridge… But again, it was an epic day! (And again, I had company from the NOT for dinner, so no eating alone!) GPS data of the day can be found here.