Let me give a quick summary of my February. I have been sleeping, training, working and eating (plus watching TV series, usually during eating or training). And this covers probably 99% of my activities. My second first-author paper is basically accepted (I got only minor comments from the referee, and the report was very positive), and I worked some days on another topic for Steven’s paper, which also got accepted in the meantime. In general, I was very motivated this month. 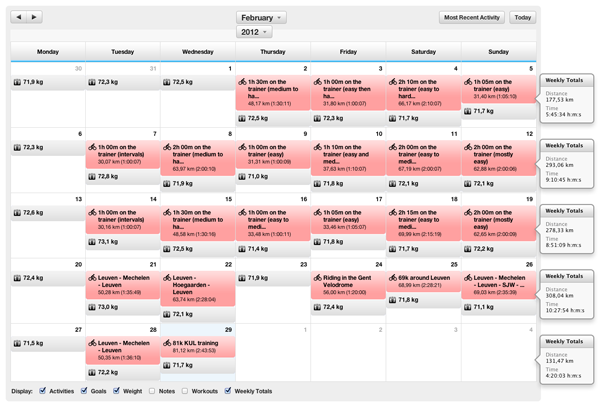 You can see my training log for February above. 1188 km, 38.5 hours, 27500 Calories. For a winter month, this is kind of amazing for me. I had a training every day, except for Mondays, which are my highly anticipated and appreciated rest days now (with an extra day of rest on Thursdays, if needed). The goal (and challenge) is to keep up with this throughout the cycling season (and maybe raise the mileage as the days get longer and the temperatures rise), with let’s say a minimum of 250 km per week (and a maximum of whatever I can manage). Of course this is tiring (but in a satisfying way), but as a positive side effect, I have no problems anymore with going to sleep before midnight, which means I can finally get up at 8, and be at work at 9. (In practice, I have replaced a lot of useless internet surfing time with the extra trainings :D) This means that as soon as we switch to summer time (which is now less than a month away), I can have my two hour outside rides still after work, in a much more convenient way (because now it is not so easy to arrange outside rides during the week – for the indoor trainer, it does not matter if it’s already dark outside). Of course I already feel the benefits of the extra training, for example I felt much stronger during the last Velodrome session (staying with the fastest group all the time, even jumping into some sprints with other guys), and yesterday when I went on a training ride with the KU Leuven team, I could follow the first guys on the climbs, and it was me who had to say to two of the other guys after the last climb, that we have to wait a bit, as we had lost the other half of the group… I do not want to be a champion or anything (the other guys do triathlon and/or real cycling races – I was the only one who was not riding in a team outfit -, so they asked me if I was also racing, and they were a bit surprised to hear a negative answer), because cycling is “only a hobby” for me (and because I have started too late for that), but I want to be able to keep up with the best non-professionals, and I want to enjoy group rides, and I definitely do not want to be dropped… I want to feel strong on the bike, this is my main motivation. And a good training can give me a satisfying feeling every day, while it is much harder to get the same feeling after a day of work.