The second day of our trip was the most laid-back one, since we did not have to drive (and while we still did, the distance was less than 10 km), and we did not need to move to another hotel at the end of the day (this would only happen once more during our whole stay in Iceland).

After a perfectly fine breakfast in the hotel we started our day of discovering Reykjavík. The weather was not really great for photography (although it stayed dry, it was also grey and overcast except for a short sunny window in the afternoon), so I don’t have that many worthy pictures to show here :( We first passed by the Hofdi House that is an old (in Reykjavik terms at least), small, white, wooden house on the seafront, that hosted the 1986 meeting of presidents Ronald Reagan and Mikhail Gorbachev which effectively was a step to the end of the Cold War. Then we walked over to the yellow lighthouse on the other side of the road, for a nice view over the bay and the mountains to the North. 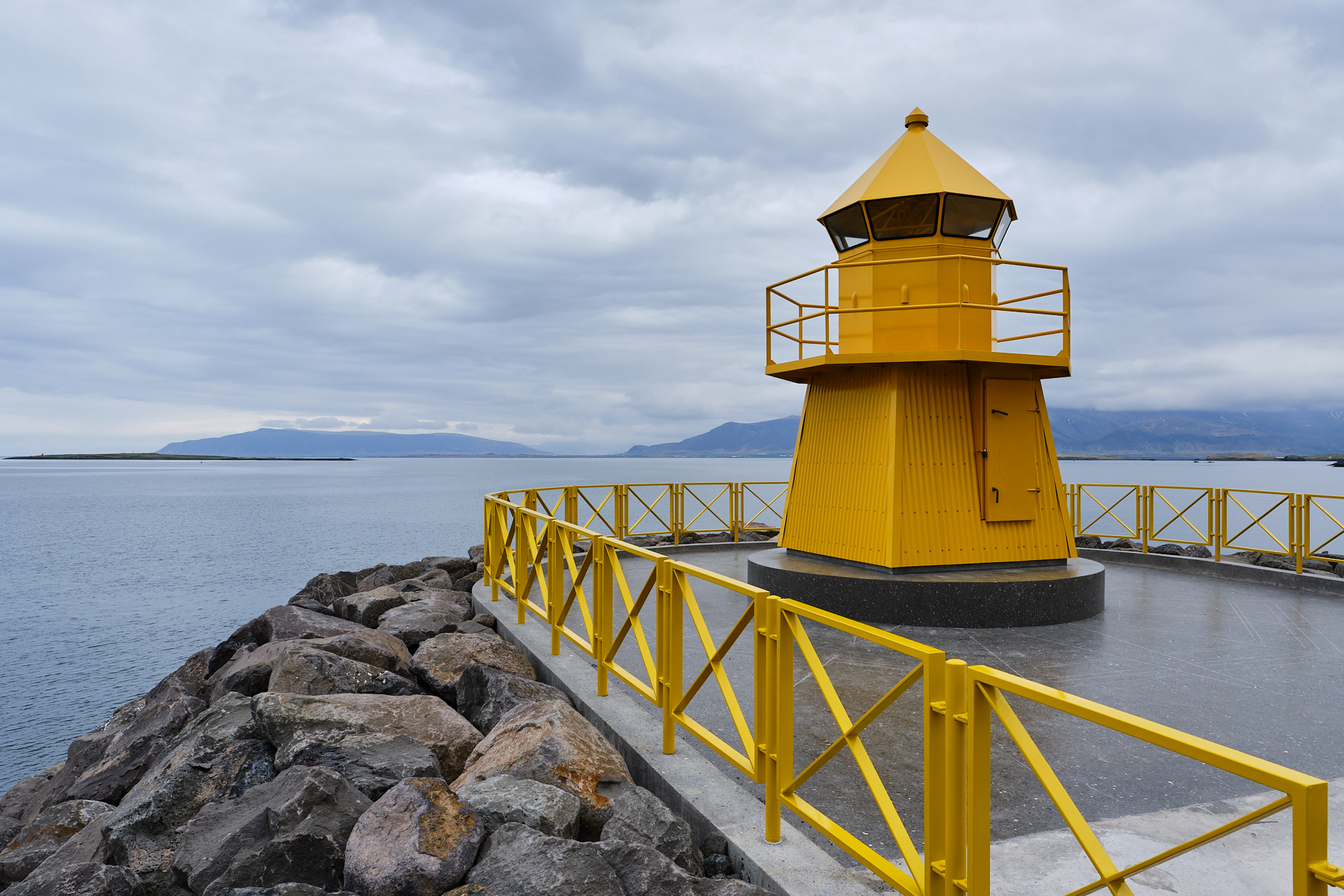 From here we followed the promenade along the coast passing by a set of sculptures towards the modern building of the Harpa Concert Hall and Conference Centre. On the way there we stopped at the metallic skeleton of the Sun Voyager that I already managed to visit (under considerably better light conditions) the previous evening. The concert hall itself is covered in a very cool glass and metal cell structure, which provides endless opportunities for architecture photography both from the outside and the inside. 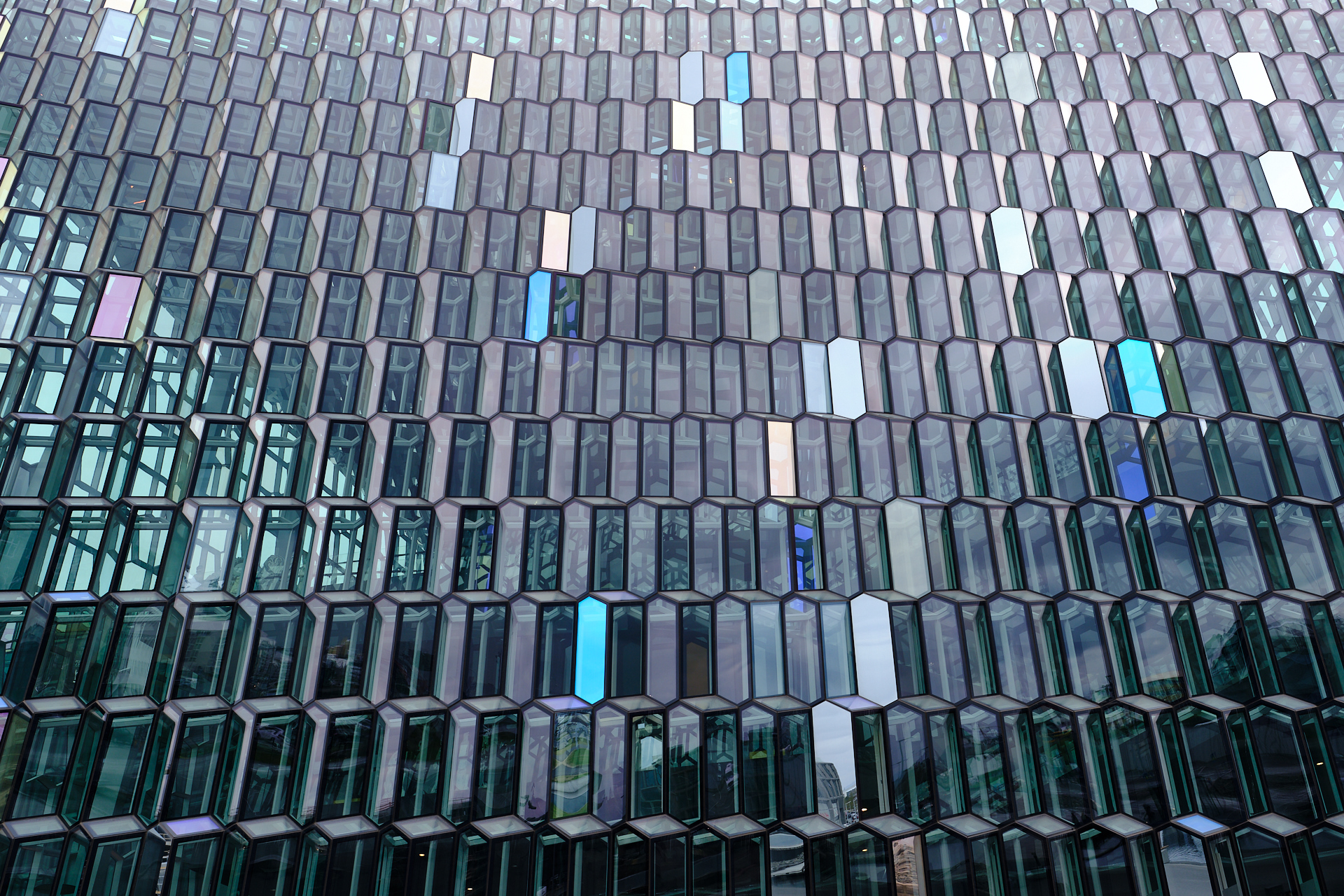 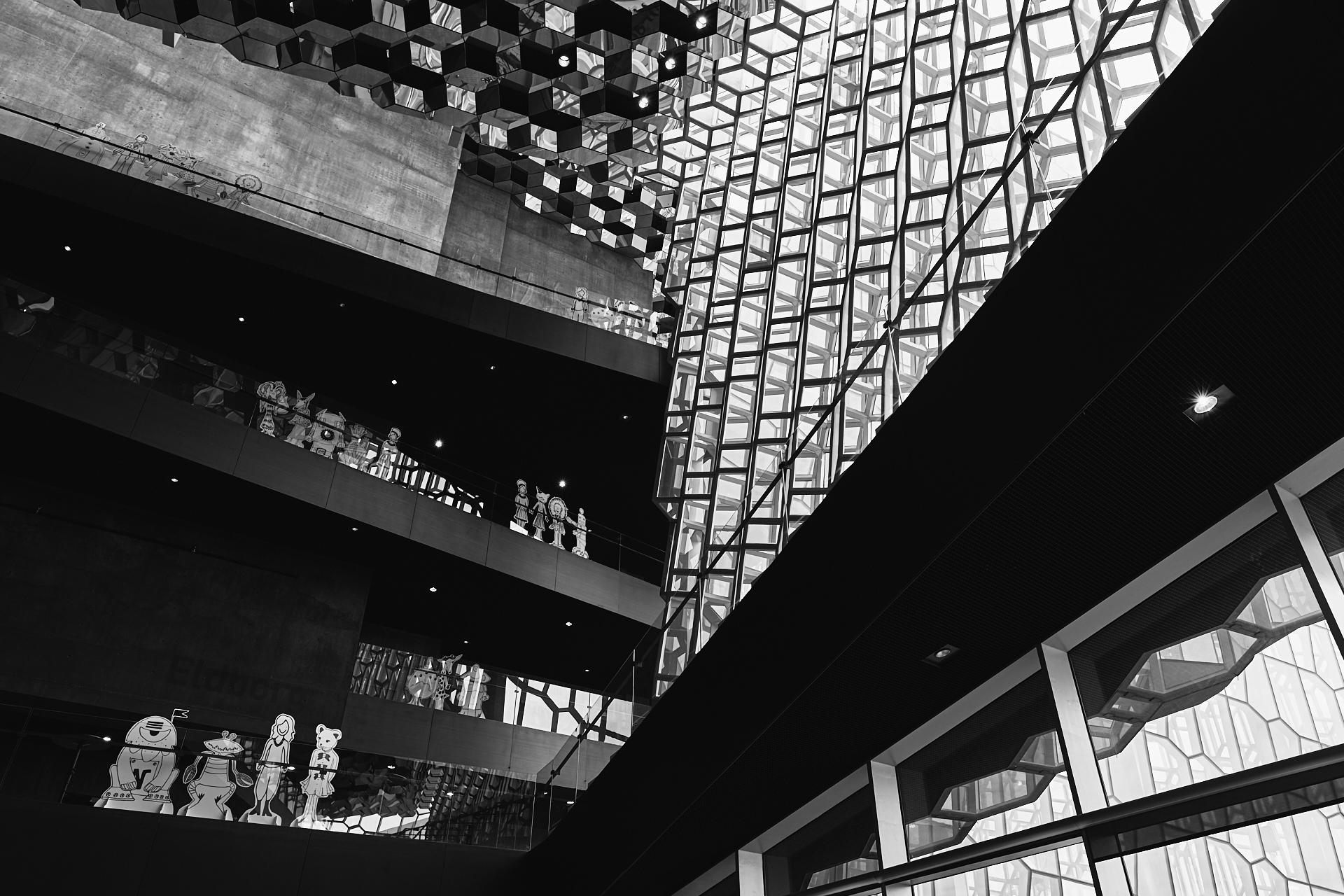 After a bit of browsing in the gift shop we continued to the old harbour, which was admittedly not super interesting (except if you want to have food or get on a whale watching boat, non of which we were interested at that moment). We turned back towards the center, walked past a never-ending row of gift and clothing stores (as a practical souvenir I picked up a bright orange hat from the local – but of course not made in Iceland – brand: 66°North, so I would not be cold and Clio would always see where I am), following the Skólavörðustígur up to the church. Due to a funeral the famous Hallgrimskirkja itself was closed, so we looked for a place for coffee and a piece of cake (at Reykjavik Roasters) instead of going inside. 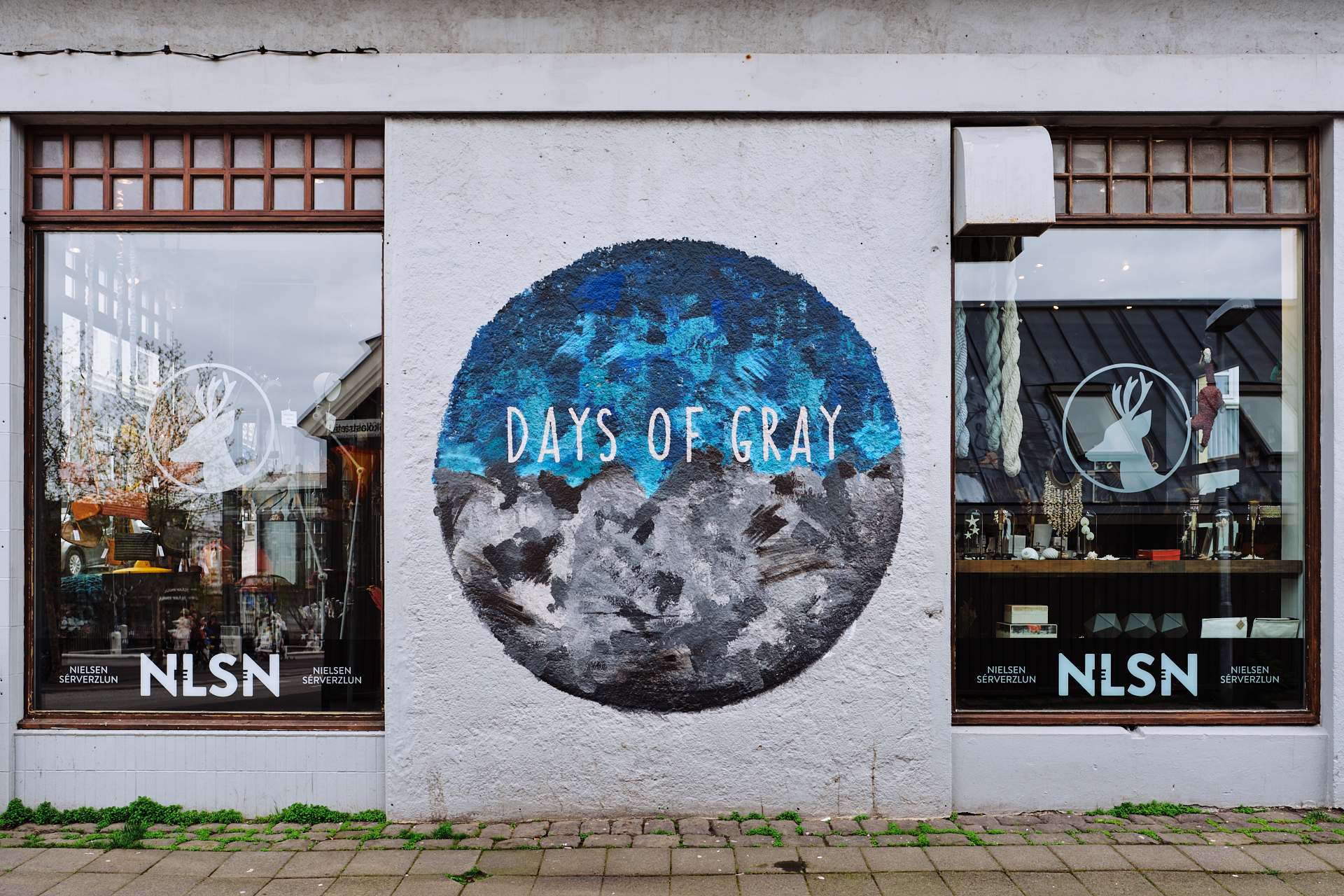 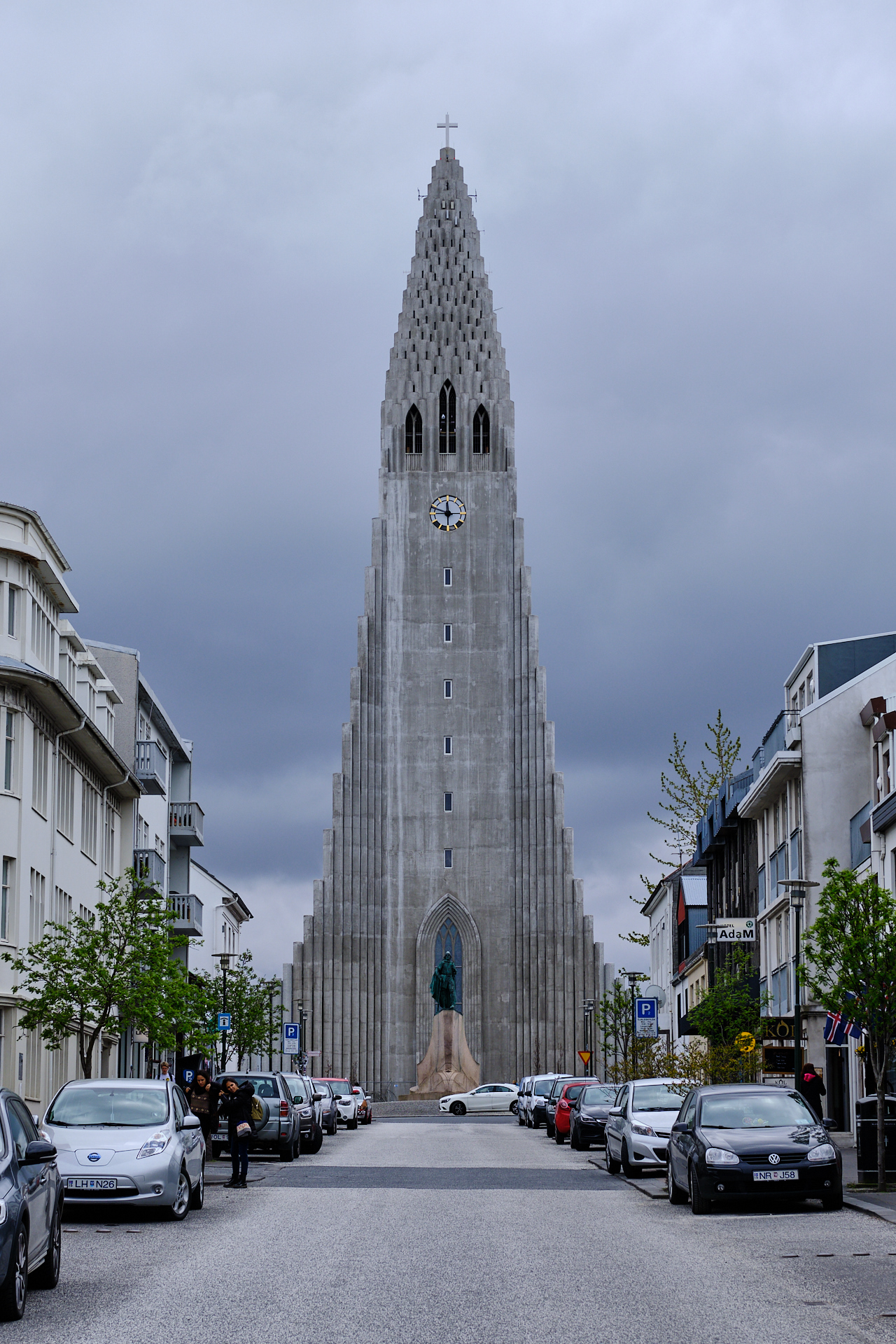 After warming up a bit we walked past a few cute colourful houses before taking a left on the Laugavegur. This is the other main shopping street, so besides window shopping, I also got a (larger) piece of the Icelandic Omnom chocolates (for later). Since we have not eaten any real food yet, our next stop was Iceland’s most famous hot dog stand, the Bæjarins Beztu Pylsur. Hot dogs – just like in Norway – became a recurring item on our menu. (BTW, they were always very good.) As we still wanted to try to get into the Hallgrimskirkja (that was supposed to be open again from half past two on the afternoon), we did another small loop passing the Parliament and the City Hall, turning back towards it across the Tjörnin lake. Unfortunately the funeral was still underway even by the time we had ‘climbed’ the hill leading up to the church, so we decided to just start heading back to our hotel. On the way we did a bit of a shopping in the local cheap supermarket (Bonus), to fill up our energy bar, cookie, and snack reserves for the coming days. This was a very good decision. 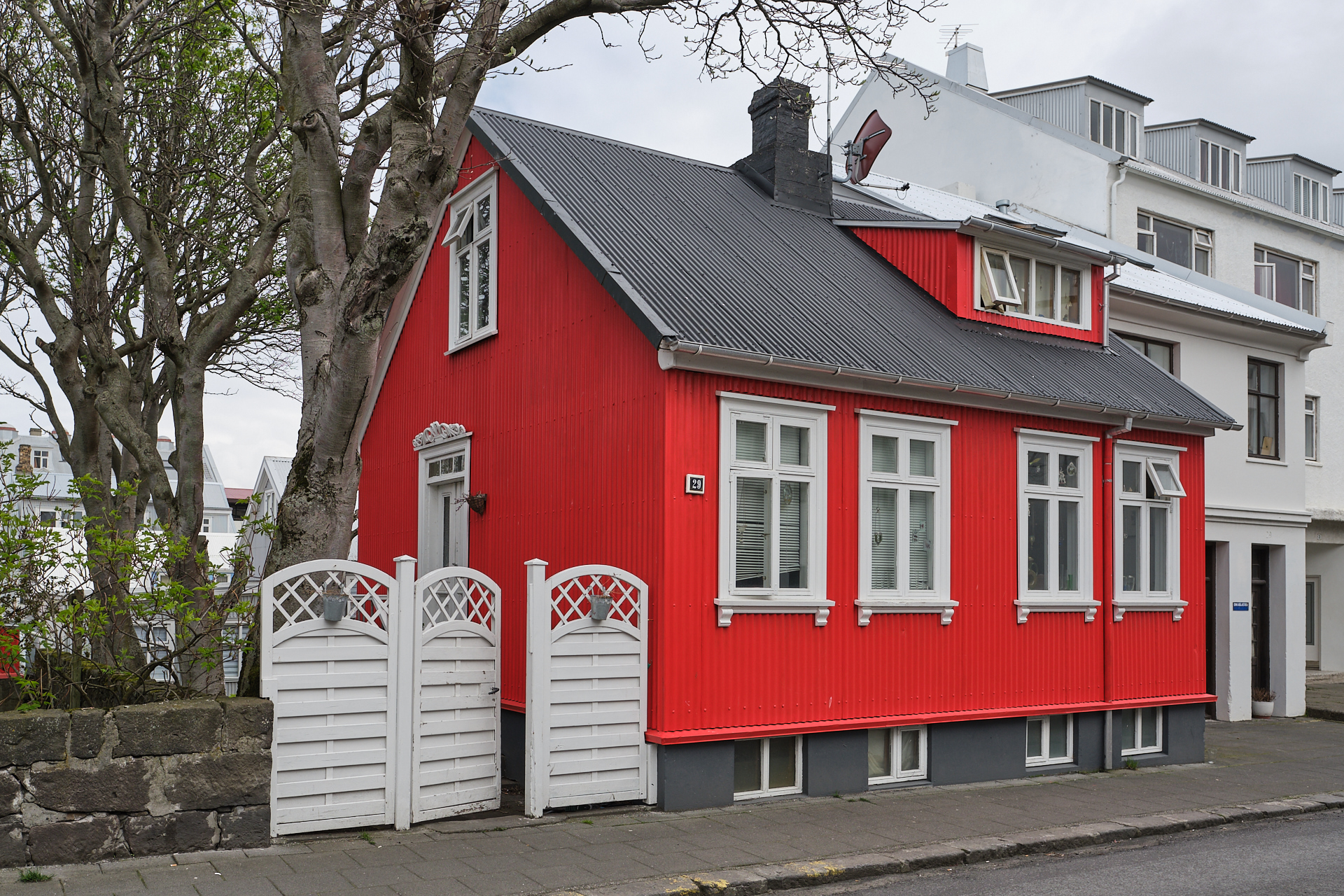 We only had a short afternoon break in the hotel, before driving to Perlan (there are also free shuttles from Harpa). This is a new complex including several (nicely done, partly interactive) exhibitions about Iceland (its geography, vulcanism, glaciers, flora and fauna), a modern 8K planetarium, and a 360 degree observation desk. I especially liked the planetarium, because the first longer show (about the aurora) included dominantly high quality and high resolution footage, immersive animations (some short sections might not be that pleasant for people that are susceptible to motion sickness) and an overall good narration and story (the second shorter one was pretty low-budget in comparison), and because it was my first experience in such a modern planetarium anyway. There was also a small underground ice-cave, but I guess that is more exciting for smaller children. Luckily by the time we made it to the panorama terrace on the top of the building the clouds opened up and we got a nice and clear view over the surrounding area in the warm afternoon sunshine. 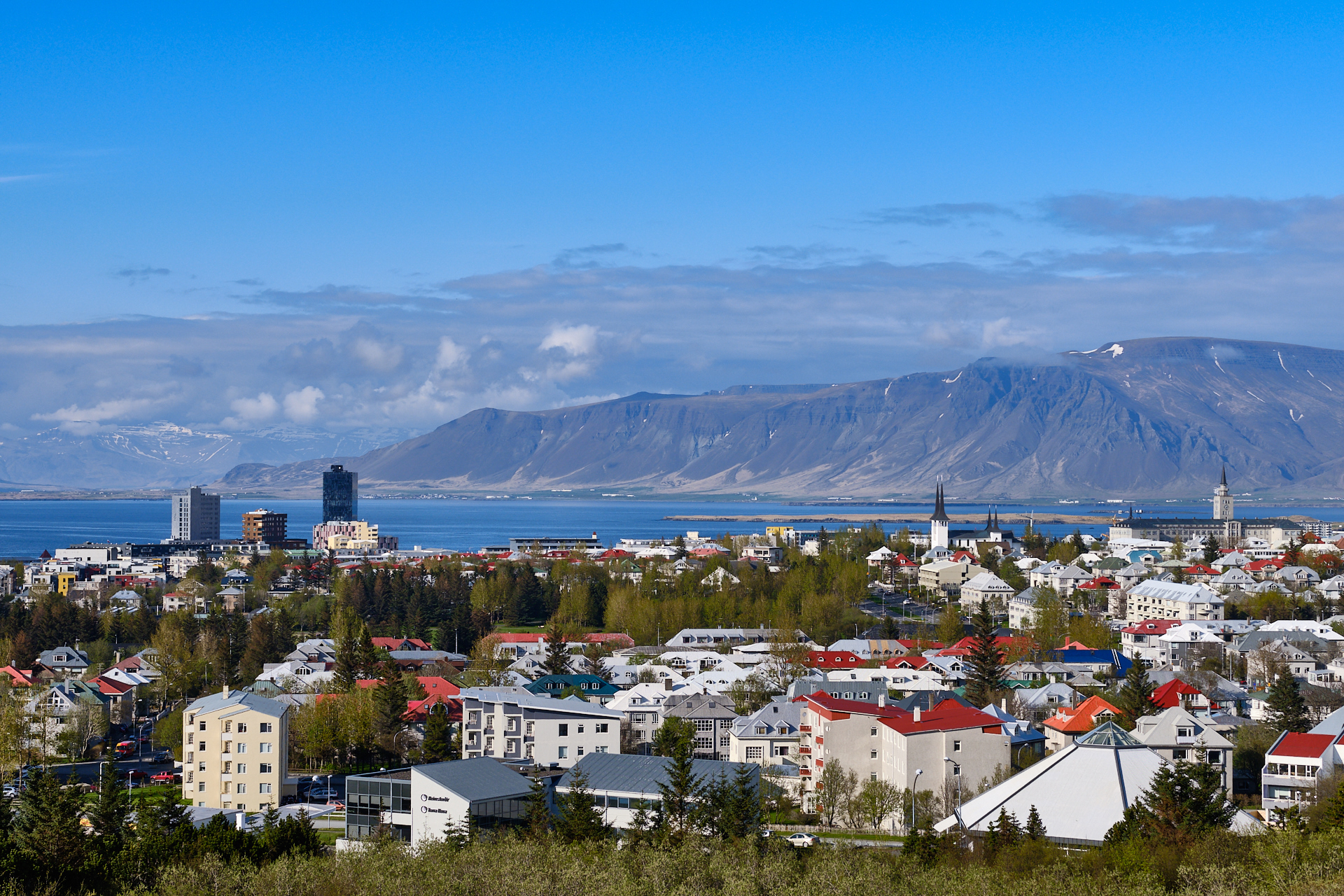 After driving back to our hotel we ate some not so special (but still good) Vietnamese food nearby, and went to sleep around sunset, knowing that the following day would be much more busy…

(We are not a very museum-heavy couple, but had the weather been worse, I would have suggested going to The National Museum of Iceland, that looks the most interesting (to me) based on the reviews. Or, should you really want to get out of the city, a small excursion to the Reykjadalur hot spring river might be a good idea for the whole afternoon.)