Our third day was mainly about the most touristic spots of Iceland, mostly following the route known as the Golden Circle. Even so, since we were there in pre-season, we have not encountered unbearable amount of tourists at any of the locations, but based on the capacity of the restaurants and parking areas I can imagine how crowded these must become in the summer. 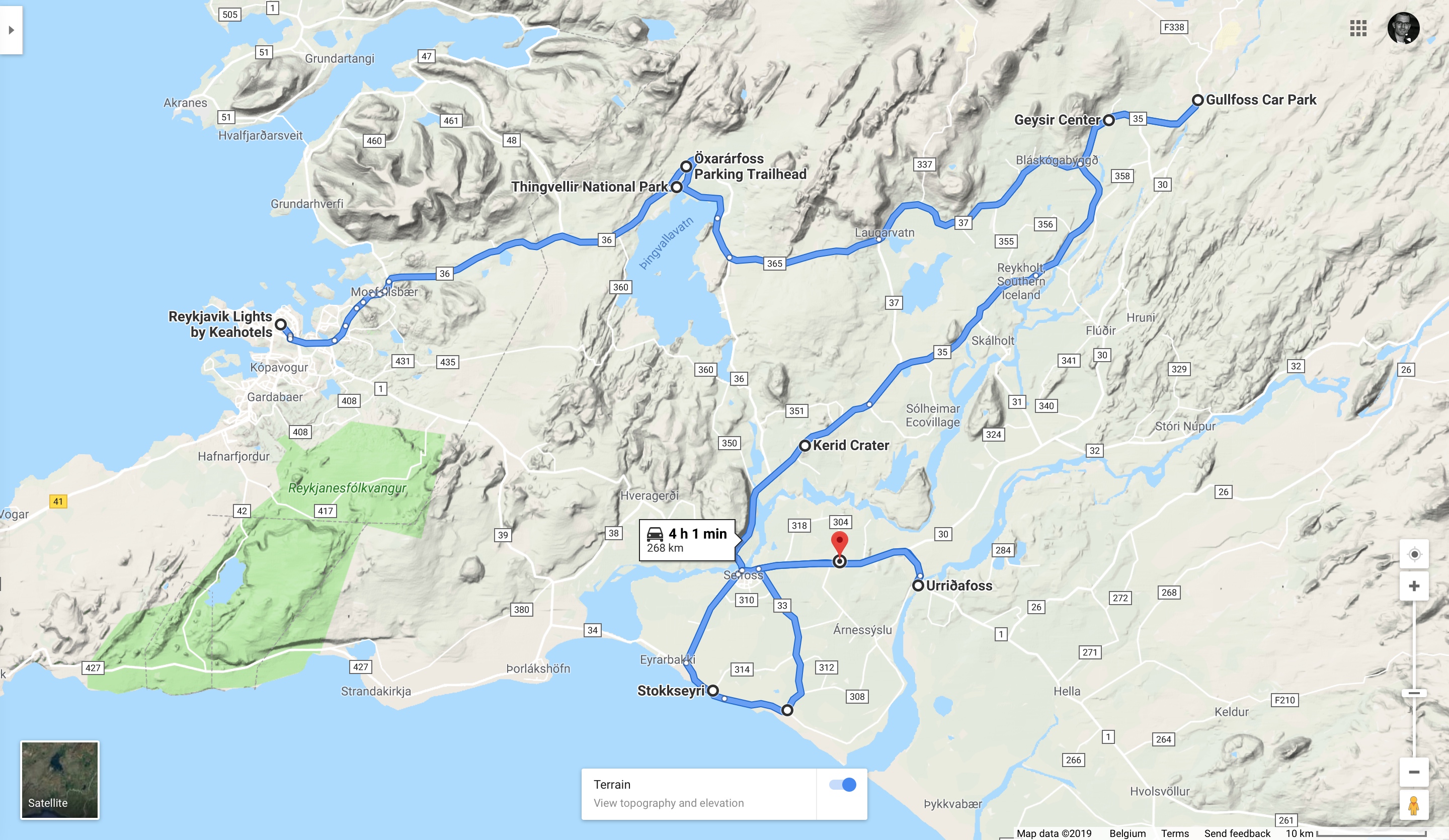 We left our hotel after a relatively early breakfast, because it was going to be a long day. It did not take a long time to leave the relatively busy ring road and turn inland leaving all the traffic behind. After less than an hour we arrived to our first stop, the Thingvellir National Park. Based on the pretty deserted parking, we were amongst the first dozen of people there that day. Paying for the parking/entrance is done via touch screen displays installed at the entrance of the public restrooms (inside), and everything is controlled via licence plate recognition cameras. 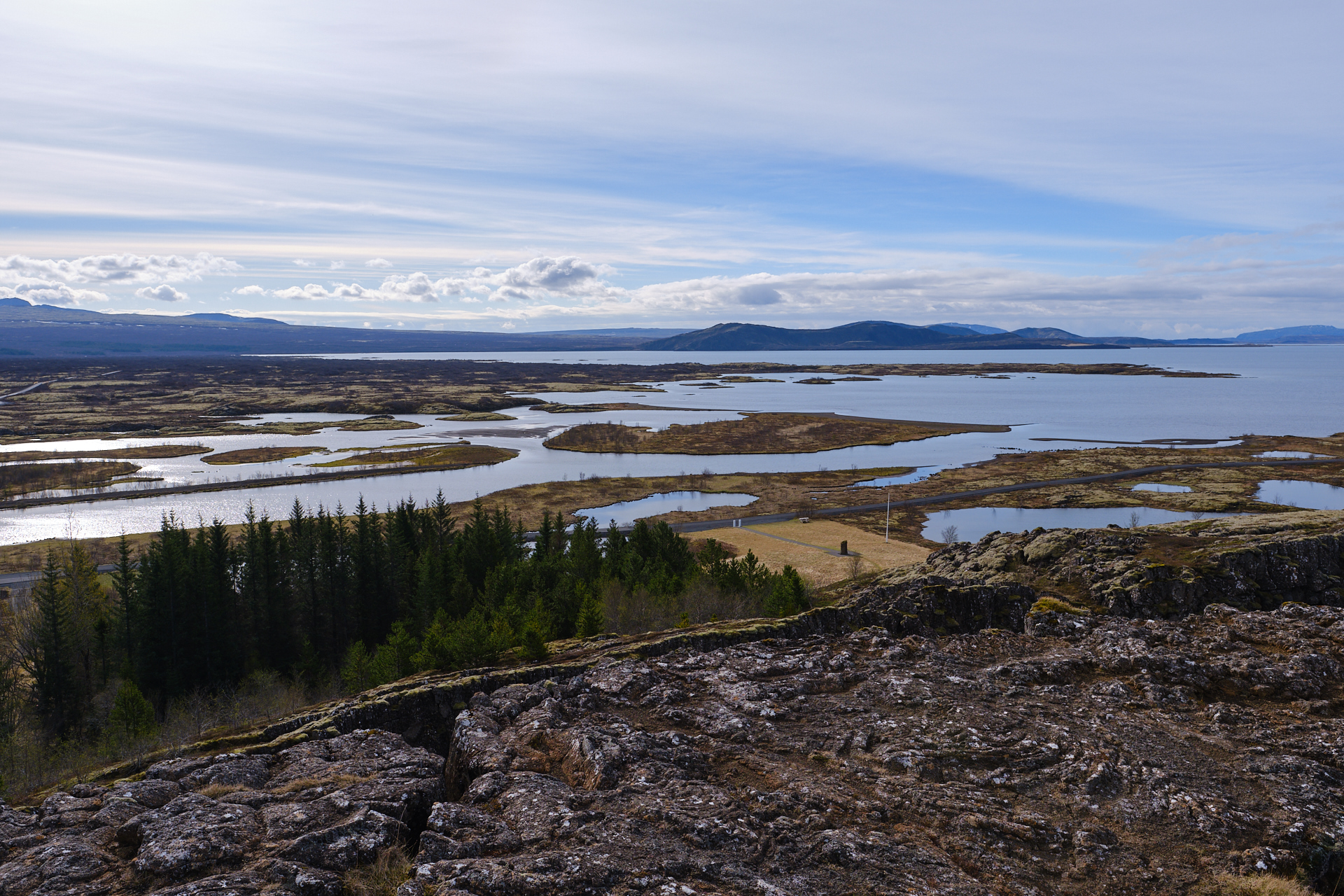 The park is situated in a rift valley that marks the crest of the Mid-Atlantic Ridge and the boundary between the North American and Eurasian tectonic plates. After enjoying a nice panorama overlooking the area from just at the end of the parking, we walked down through a rift, and did a small circle past cliffs, waterfalls, rifts filled with unbelievably clear water, and a historical site. 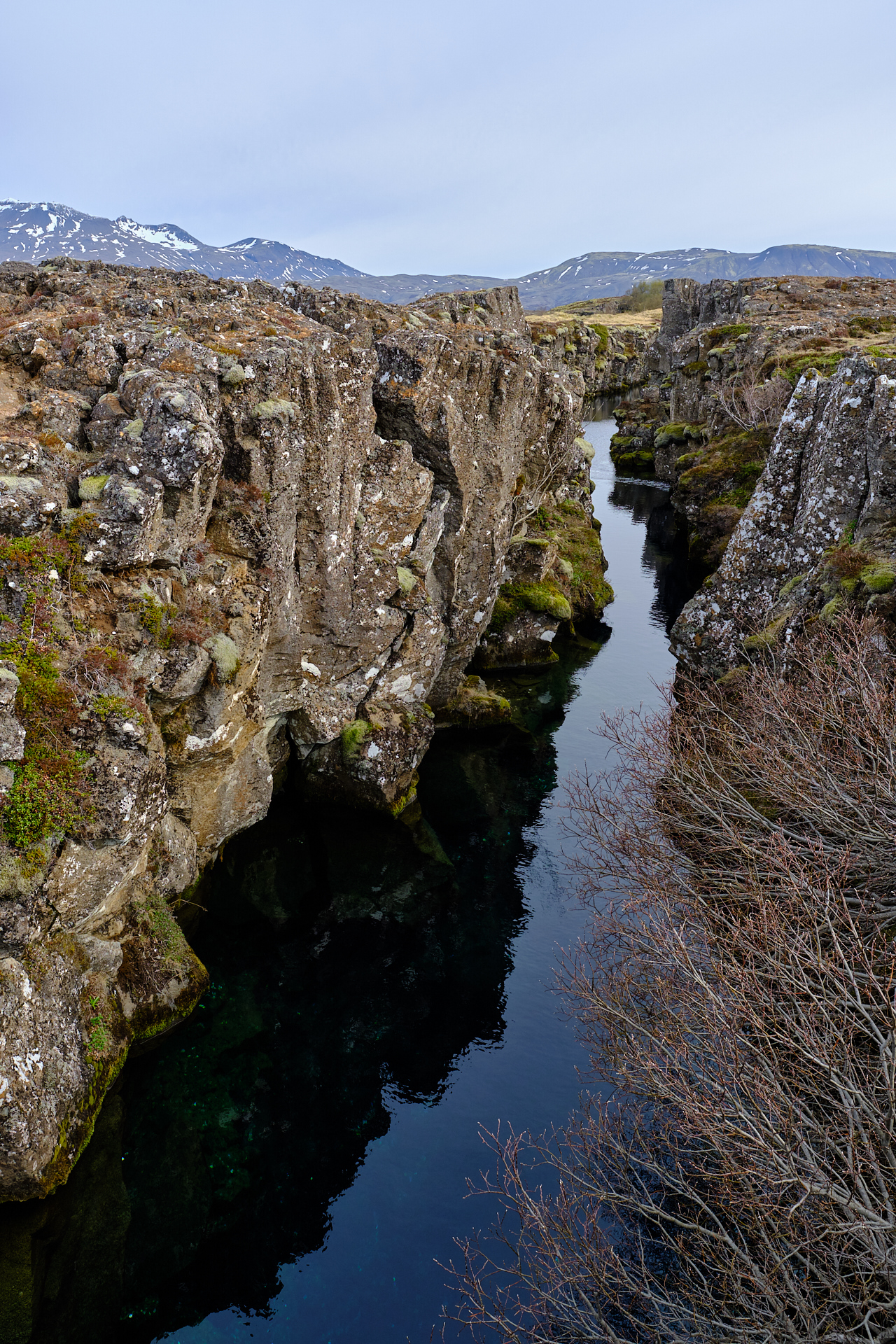 To save some time, we got back in the car for a few minutes and drove to another parking that is at the beginning of a trail that goes down inside the other end of the main rift to the Öxarárfoss (waterfall). 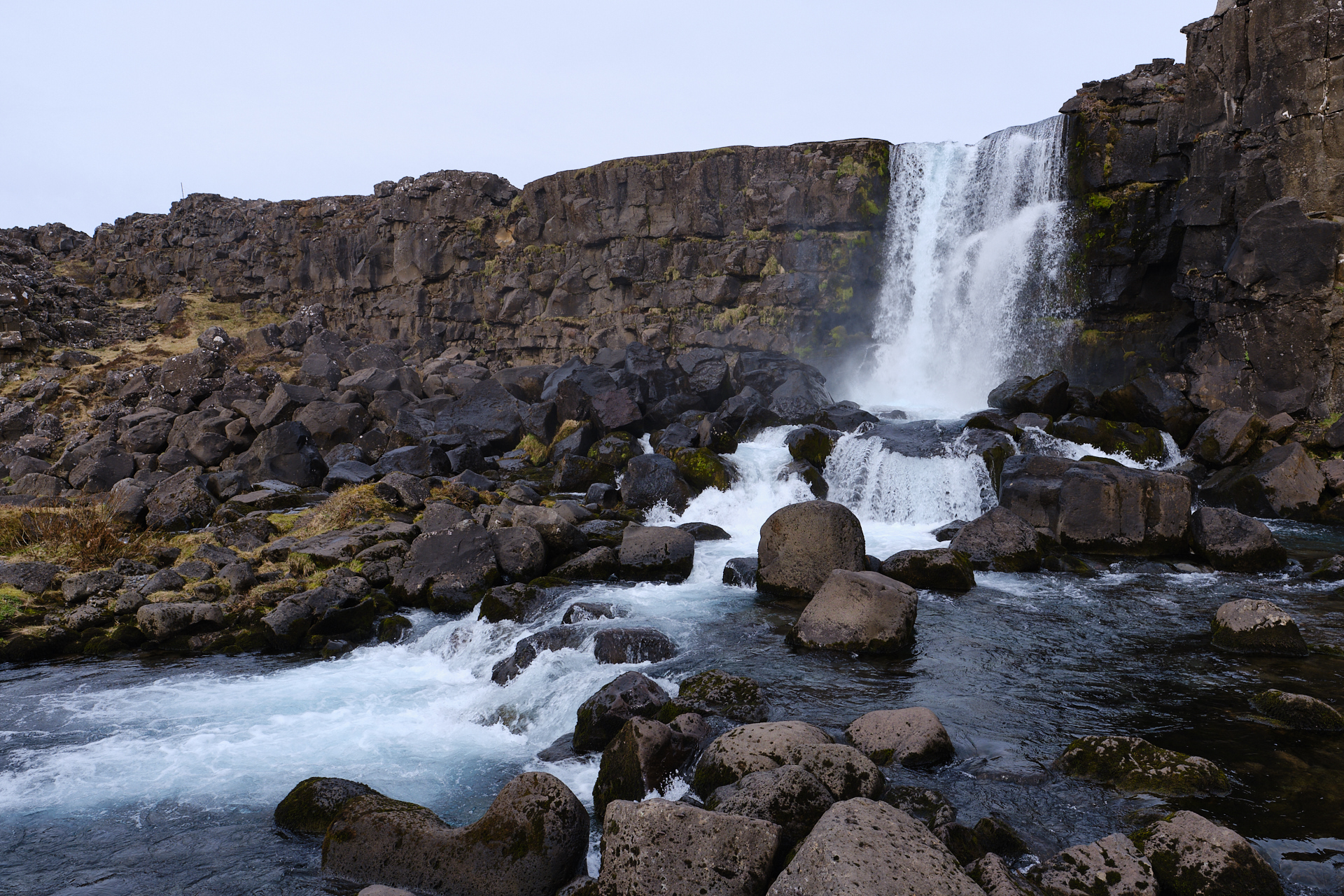 From here we drove further inside the national park since the main road (36) was closed for renovation, so we were forced to enjoy the scenery a bit longer :) Then we had to drive across a more deserted landscape just South of some mountains (road 365), before getting back to a greener area (road 37). Overall after an hour (plus me stopping here and there for a random picture) we arrived to the next famous stop, the geothermal area around Geysir and Strokkur. The former is not active anymore, but the latter keeps blowing hot water quite high every few minutes. 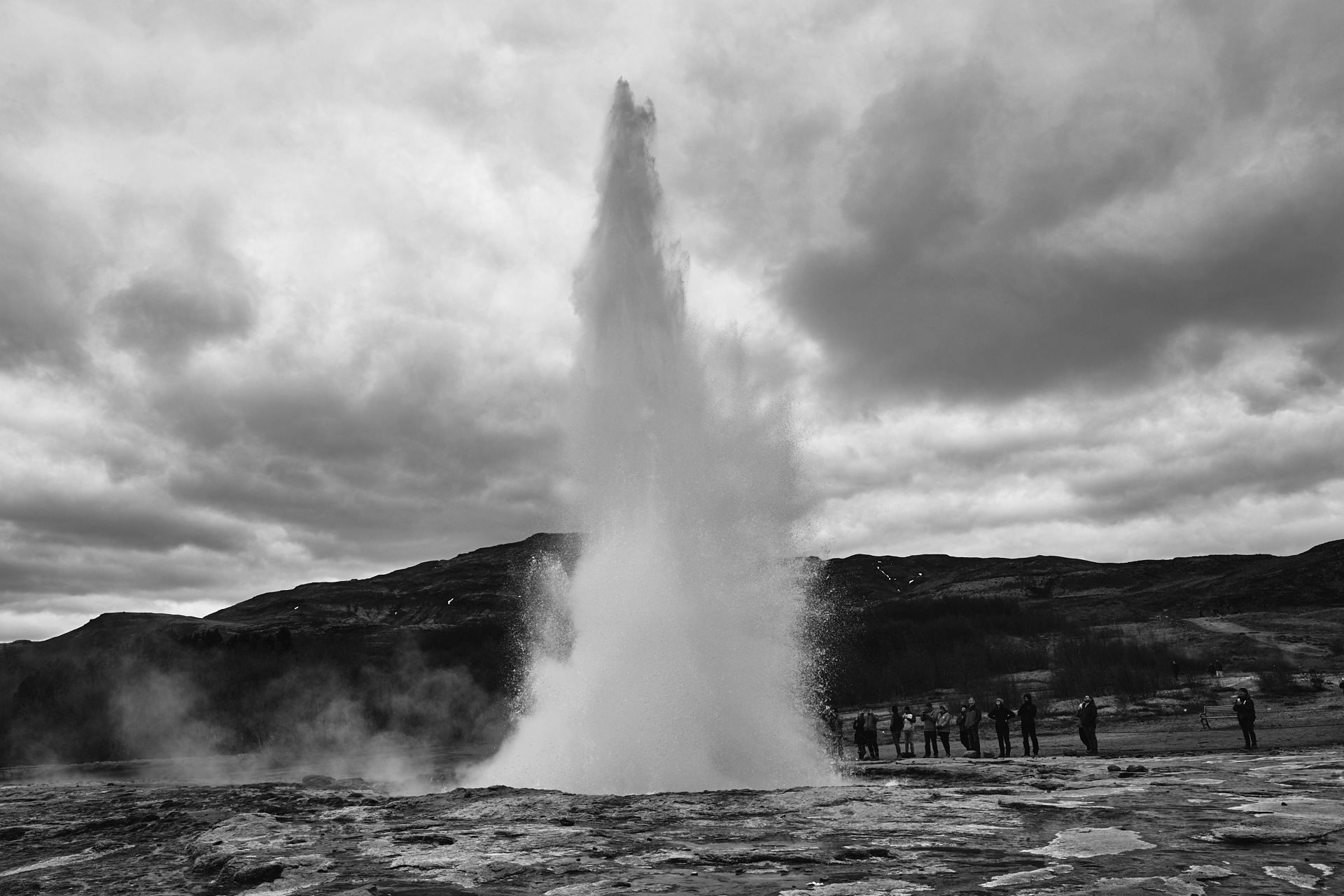 Unluckily the overcast sky was really not great for photographs here, but I still tried and thus wasted a good half hour trying to set up a more complex long exposure photograph, which resulted in a totally useless and flat picture, so at the end I had to settle to a normal handheld shot. At least I tried. But beyond the technical difficulties, I was very happy to see my first geyser. No matter how hyped the Golden Circle is, I would not suggest skipping this spot if you have not seen geysers yet. 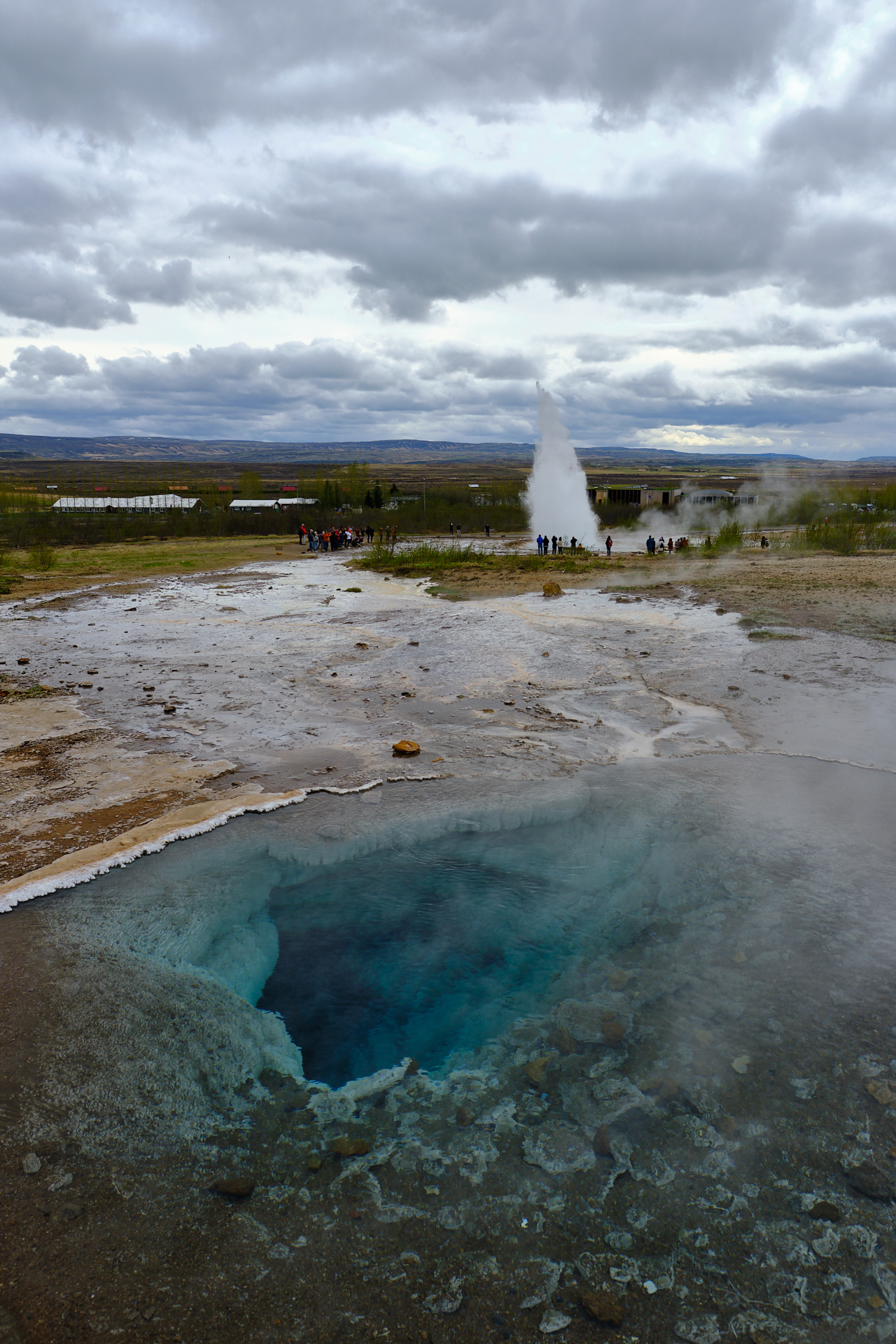 There were also colourful hot springs, small smoking springs, and so on, everything a proper geothermal area can provide. We had a small lunch here in the Geysir Center, which was surprisingly good for such a place (that was also clearly oversized outside of the main tourist season).

From here it was only a short drive further up the main road to the next stop, the magnificent waterfall of Gullfoss. Here there are two main paths to follow, providing views from two different elevations to the rumbling waters. We were lucky with the wind direction as the spray from the waterfall was blown mostly away from us. At one point even the Sun broke through the clouds just long enough for a sunny picture. 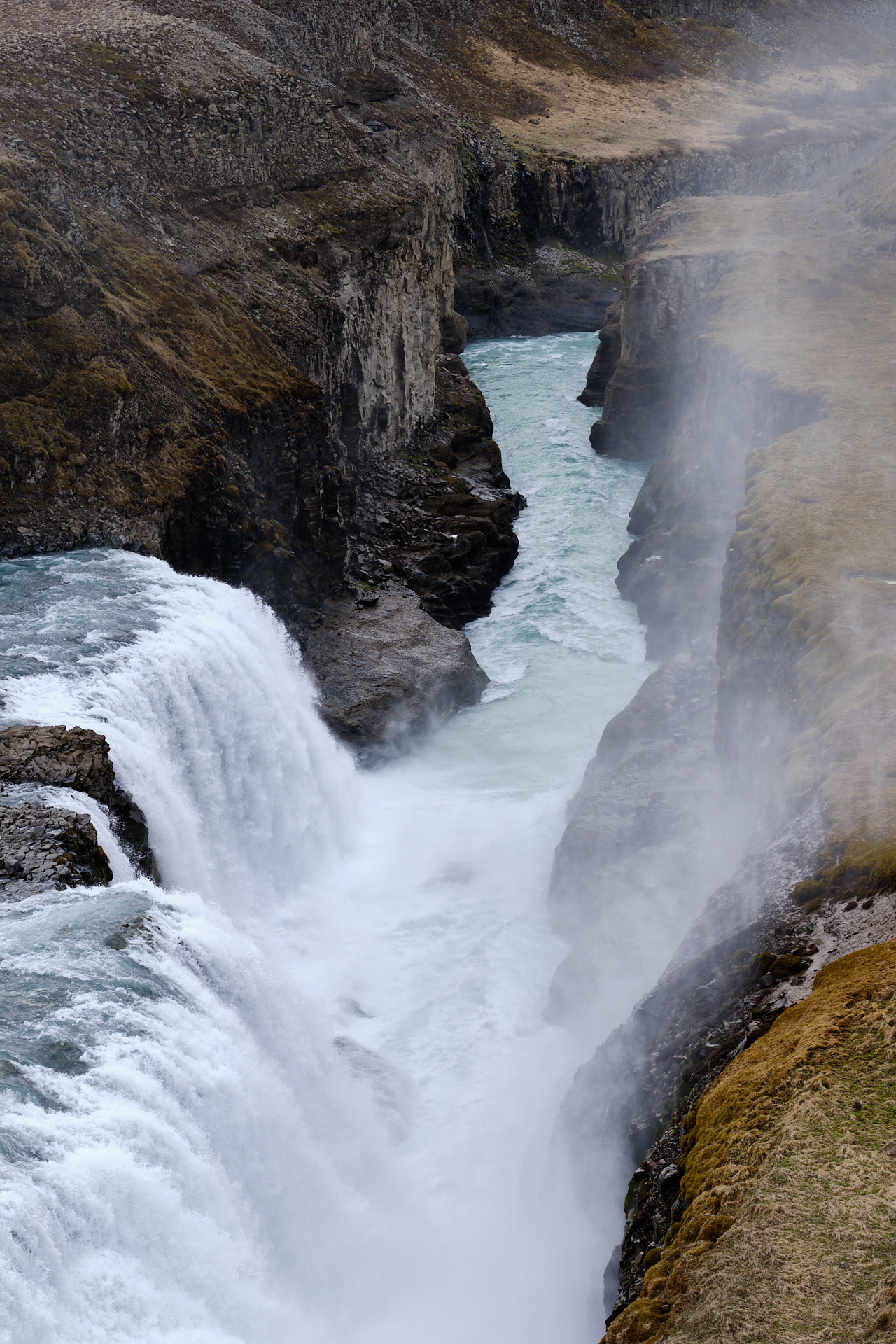 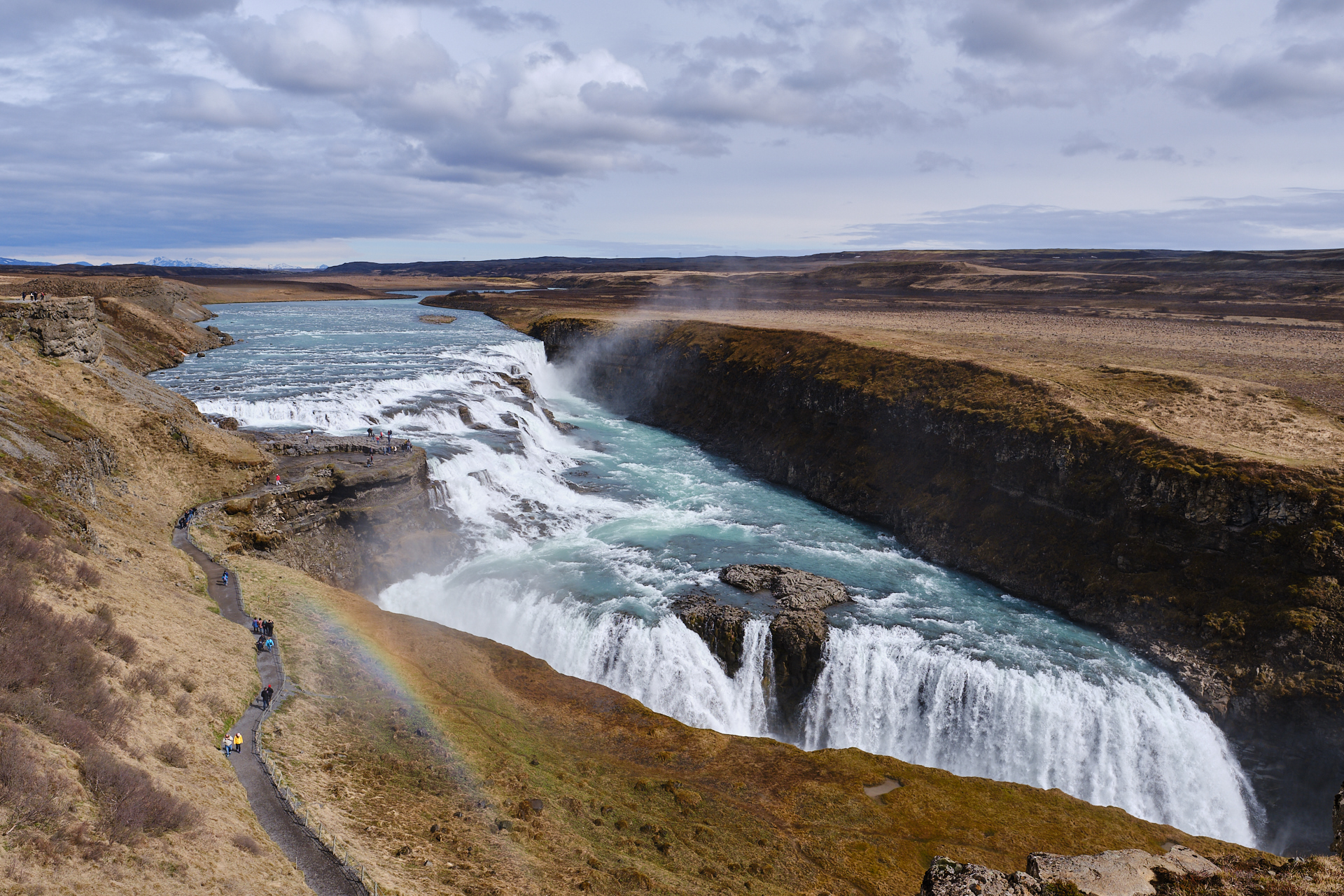 To drive towards our next stop, we had to first pass by the Geysir area once more (and we were lucky enough to see the erupting Strokkur from the car), then take road 35 towards the Southwest. This led through a mainly grass covered hilly region, with not much special to see. After a good three quarters of an hour drive we arrived to the Kerið Crater, a small volcanic crater lake with vibrant colours. We walked around the rim before driving further. 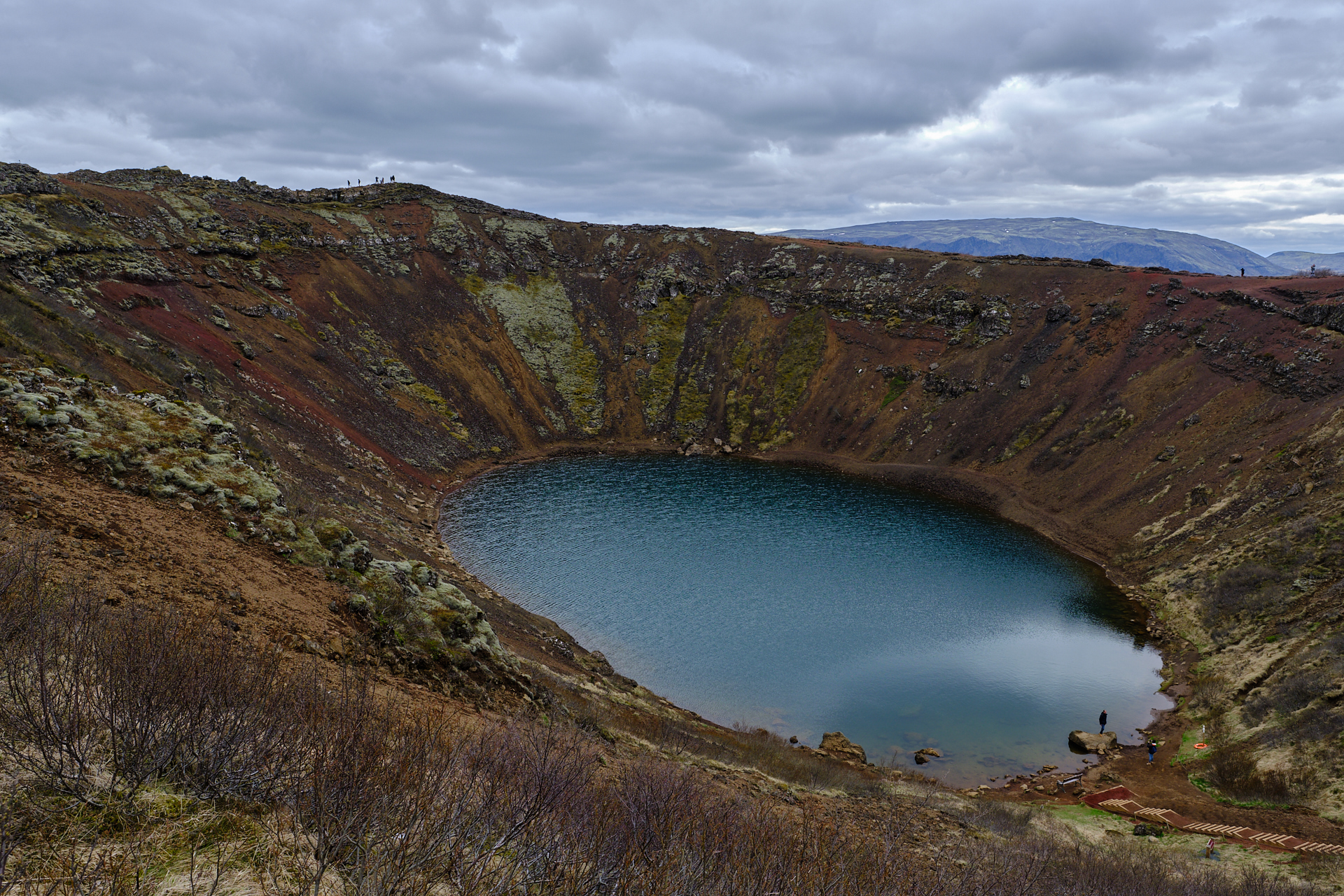 Since it was a bit early for dinner, we decided to first check in to our accommodation for the night, the Lambastadir Guesthouse. After a bit of unpacking, we drove to the fishing village of Stokkseyri (where we walked around the beach for a short while), but instead of eating there according to our original plans, we ended up in the more affordable Krisp Restaurant in Selfoss. They had good burgers. After dinner I dropped Clio off at the Guesthouse before driving to the nearby Urriðafoss for a picture before calling it a day. 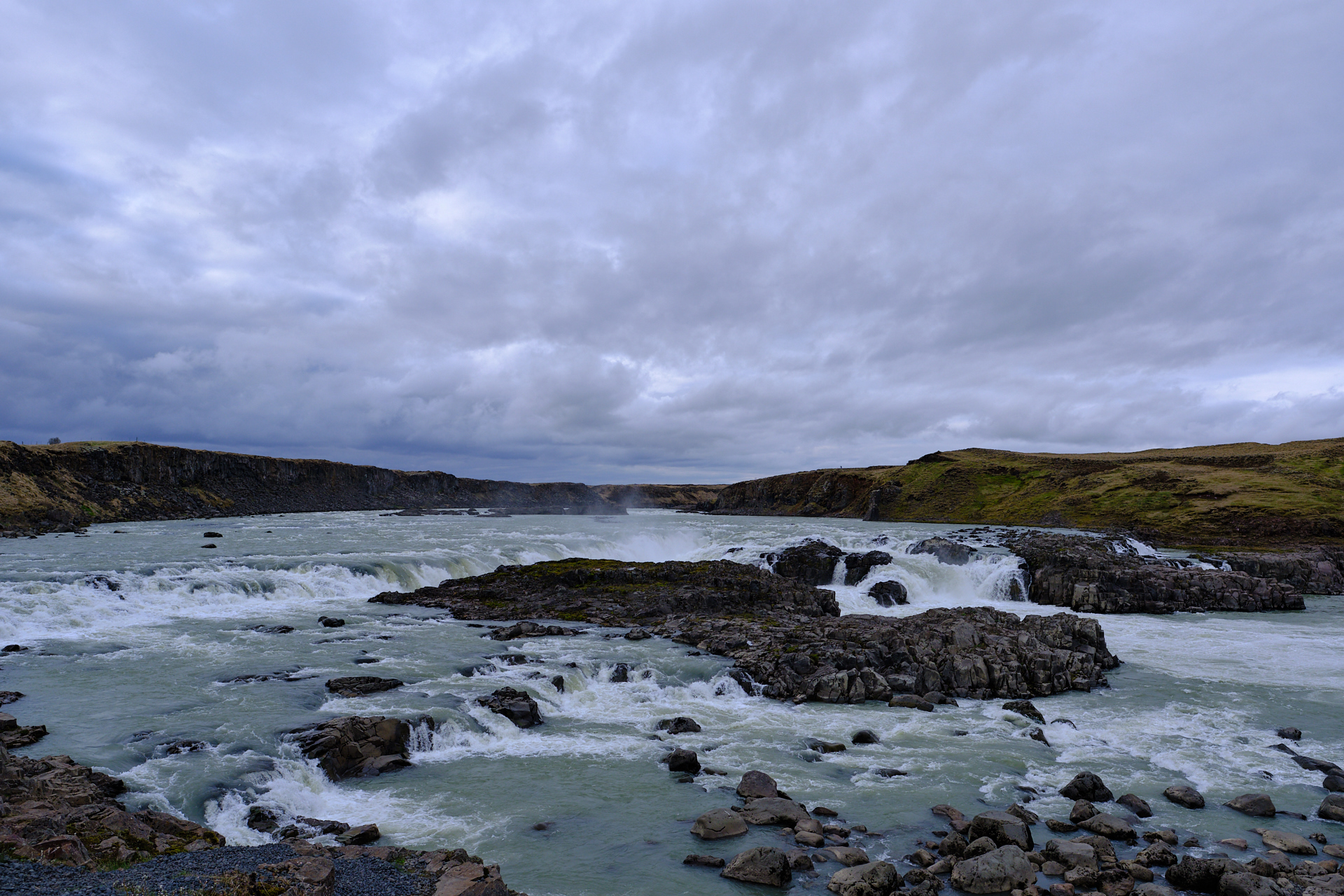