The breakfast at the Lambastadir Guesthouse was simple but delicious. The morning was sunny but cold, with temperatures just above freezing, and there was still some dew on the grass from the rain that fell during the night. We started the day by driving off the ring road towards the Northeast, in search of waterfalls in a deserted landscape. 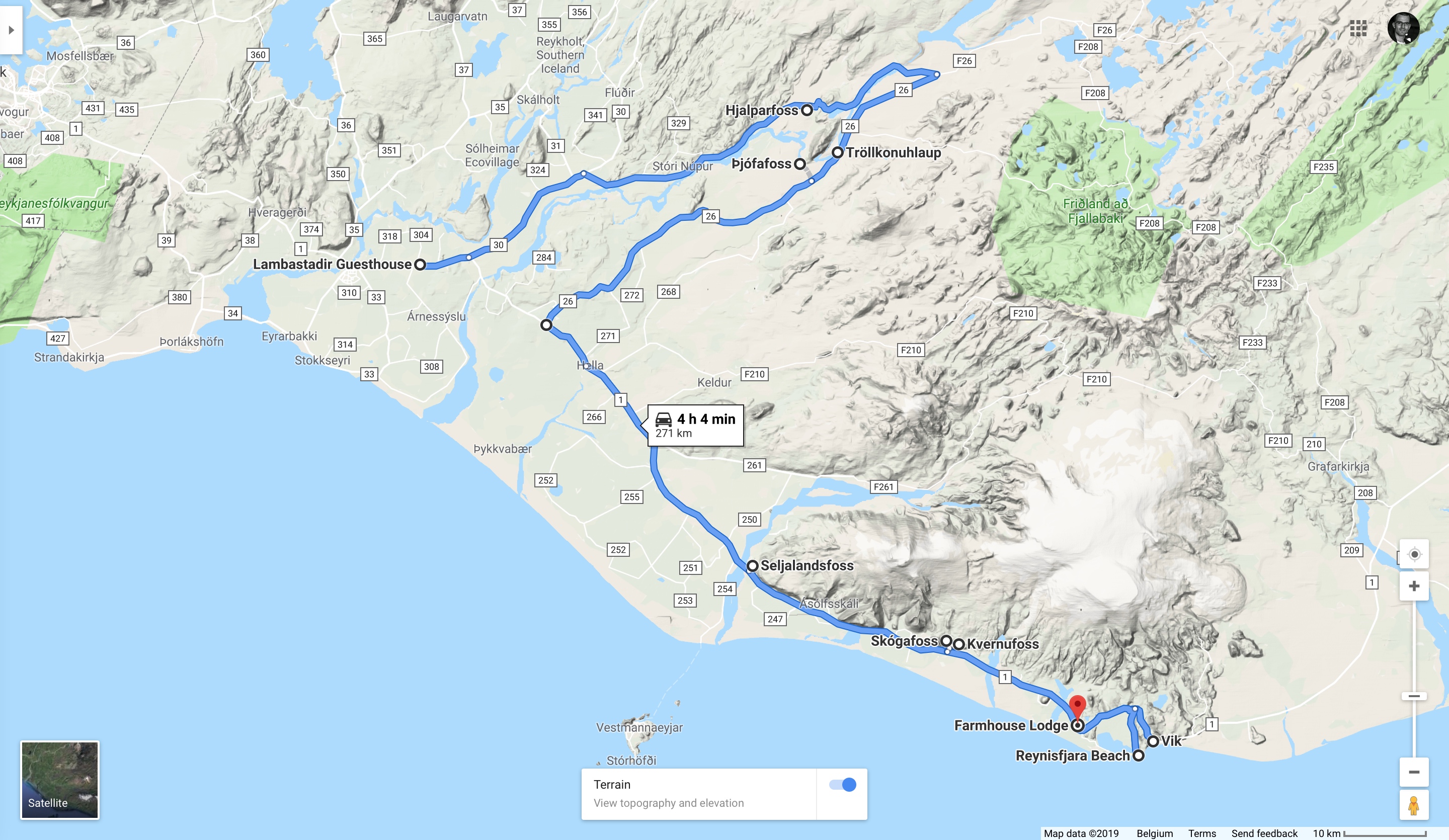 We reached our first stop, the Hjalparfoss after a good 45 minute drive (including a short bumpy gravel road that took us to the parking itself). There was a strong cold wind blowing outside, but the waterfall was quite pretty, coming down in two branches framed by typical twisting basalt columns. 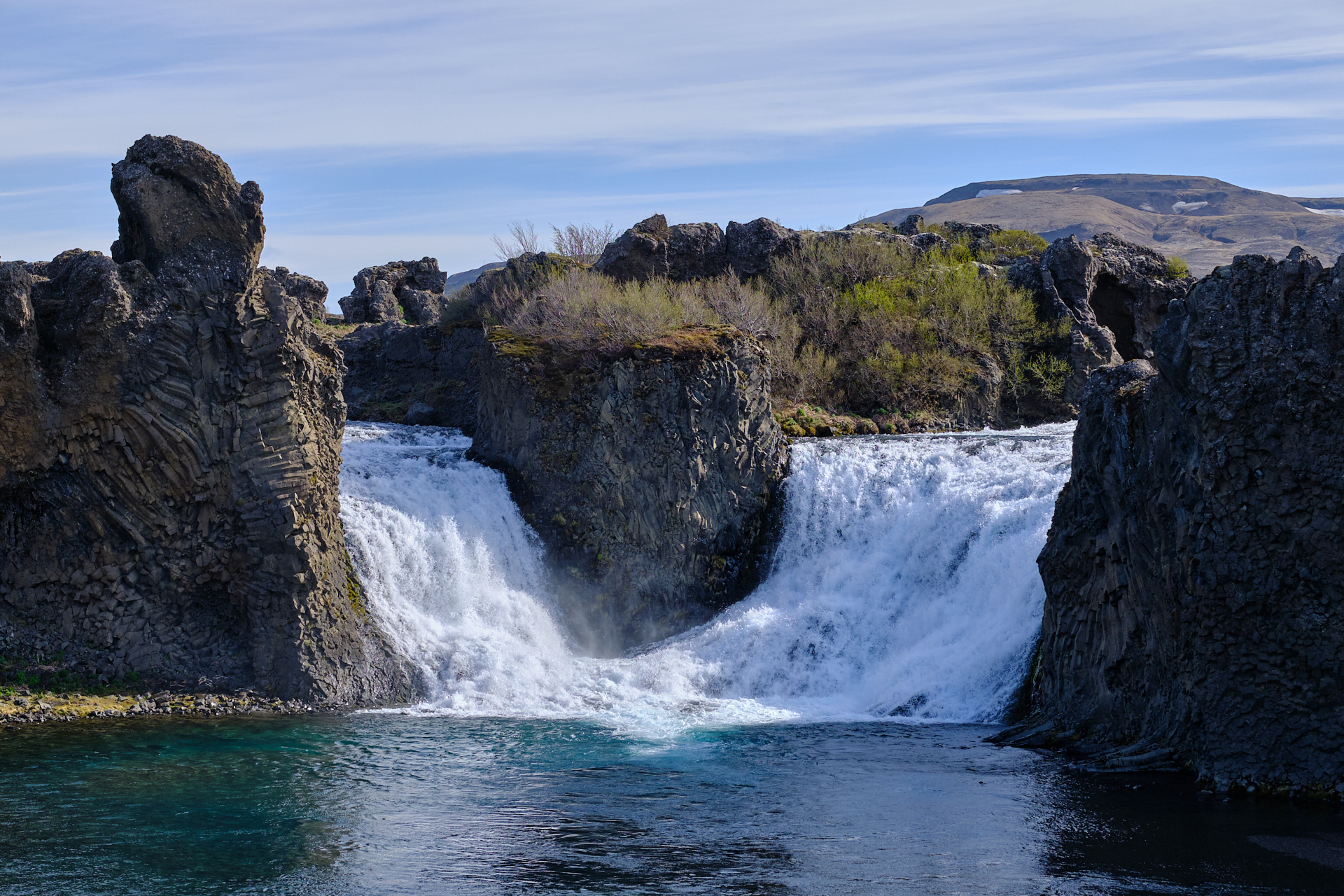 In better weather this might be a good place for a picnic (the river under the waterfall broadens immediately into a calm, almost beach-like body of water), but for us it was time to get back into the car and drive further before my hands would freeze to my camera. Our next stop would have been the Haifoss, but to my (large) disappointment (and Clio’s slight relief), the 7.5 km long bumpy gravel road (332) leading up to it was closed due to unstable (thawing) conditions. It is a pity because this would have been definitely one of the nicest waterfalls, but on the other hand we got quite some unexpected extra time for the rest of the day, so I could spend a bit more time taking pictures at the remaining locations. 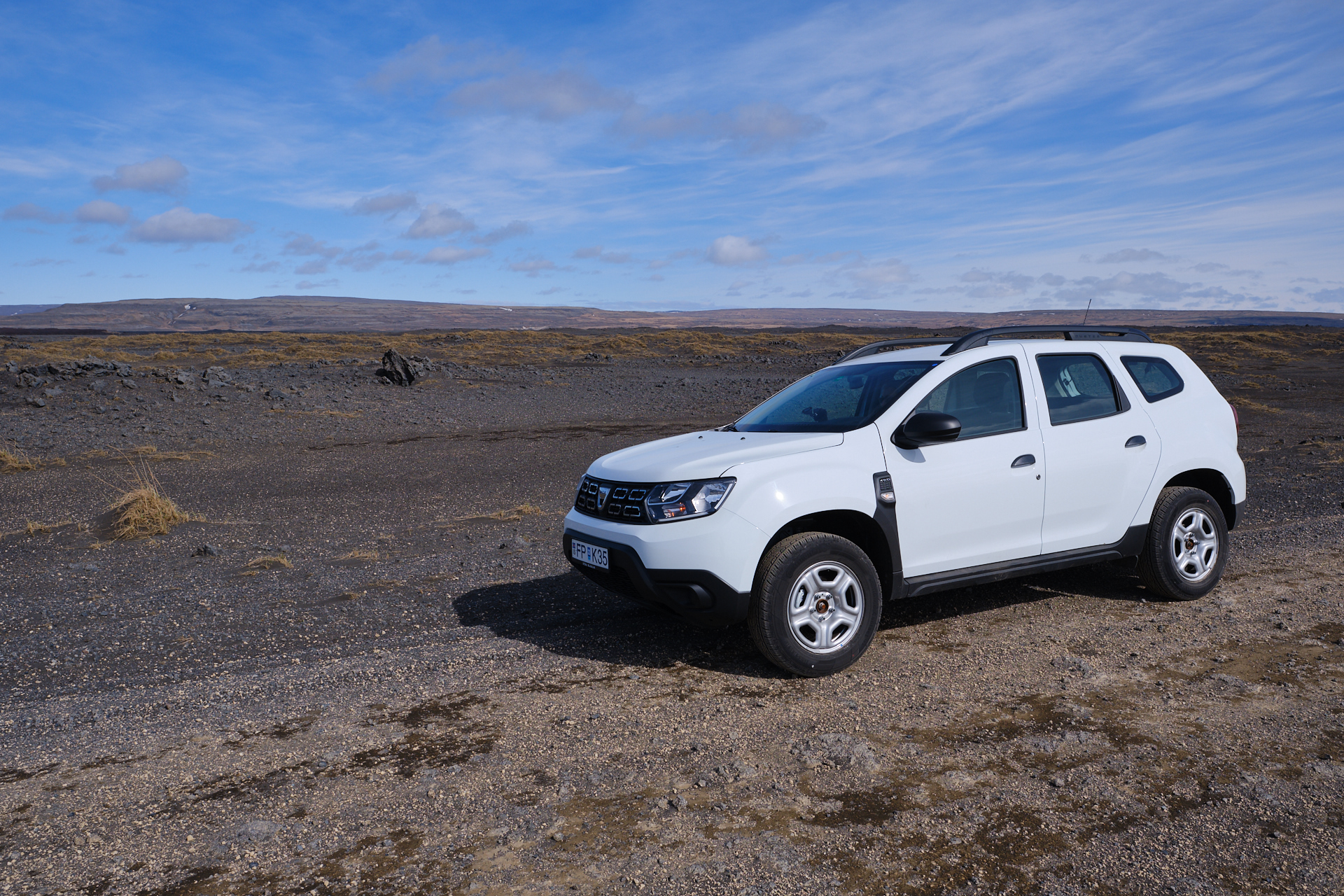 From here we had to still drive a bit further inland to cross the big river (that we have been following upstream before), then turn back Southwest onto a long gravel road (26 – see photo above of our car on the side of it). This straight and (at least then) pretty deserted stretch led us across a large lava field providing perfect views towards the snowy volcano of Hekla, and the occasional dust devils that appeared and disappeared along the “road”. The road turns back to smooth asphalt upon reaching the Búrfell mountain (to the right), and soon after there are (at least) two more waterfalls to visit. The first one is the Tröllkonuhlaup which is just a bit off the main road (but you need to look at the satellite imagery of Google Maps to be able to find the unmarked gravel trail leading to it), but when we were there it was almost completely dried out, so we did not stay there for long.

To reach the second one (Þjófafoss) you need to make a slightly larger detour from the main road, but this gravel road is well marked. This is again a quite impressive waterfall, with nice views down to the bend of the river (bordered by plenty of tall basalt columns), and to the Búrfell and Hekla above. I used my graduated ND filter here to get a few nice pictures. 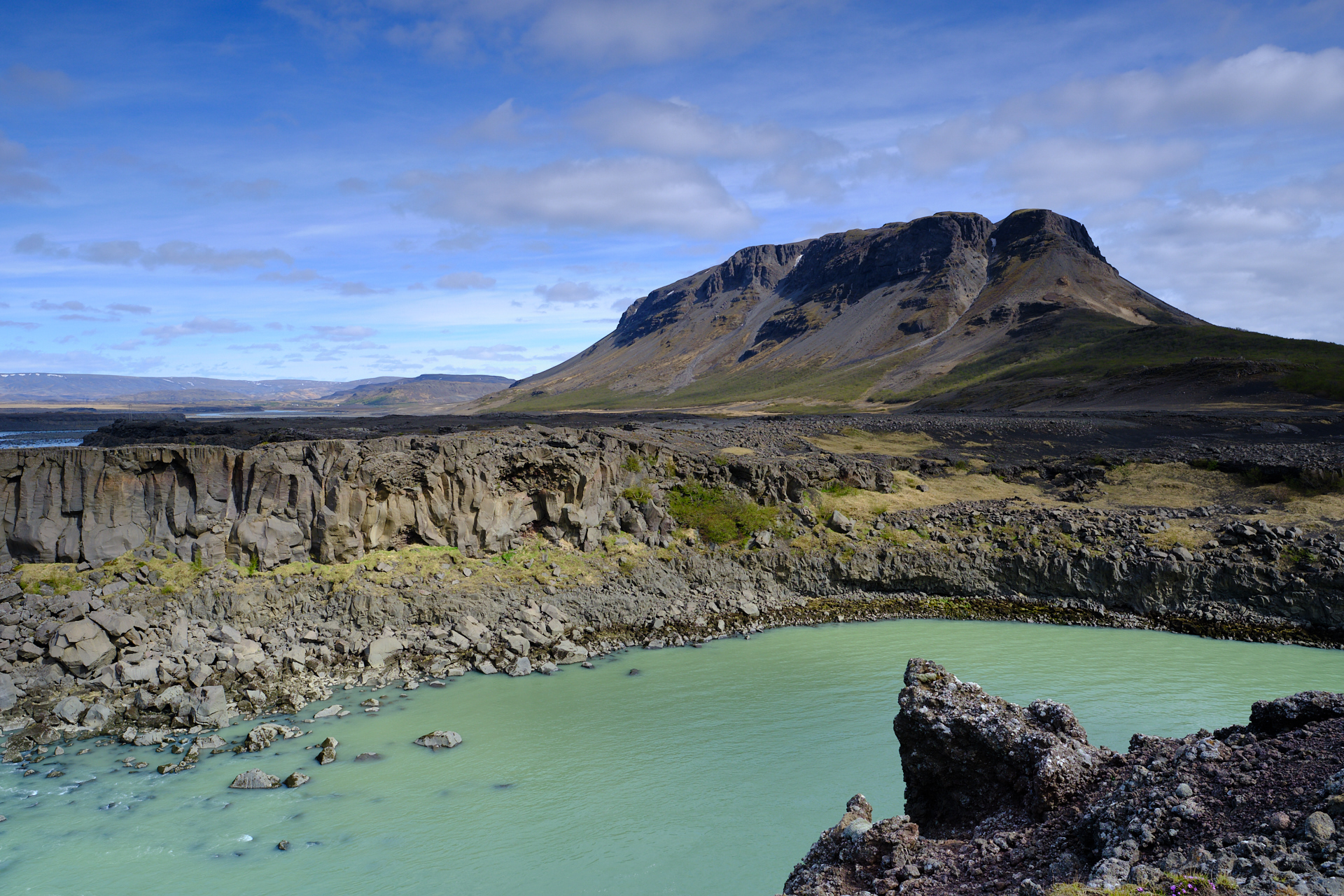 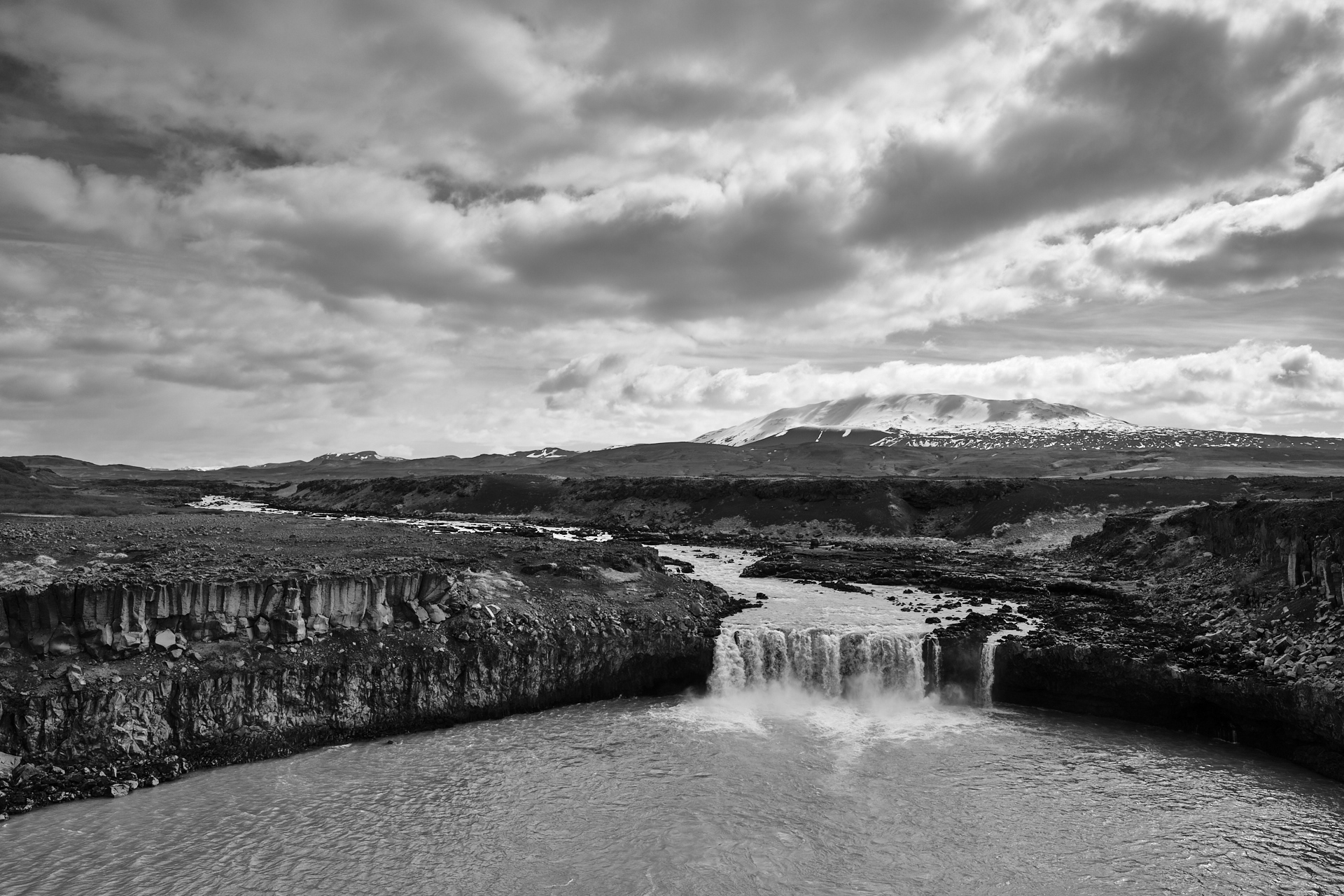 From here it was a longer (more than an hour) drive first back to the ring road, and then further onwards to the East. For lunch we just stopped at a petrol station (N1 in Hvolsvöllur) for some fish and chips (these were always a good option). Then around half past two we arrived to the waterfalls of Seljalandsfoss and Gljúfrabúi amidst some intermittent snow showers. (Here you have to pay for parking at one of the machines.) 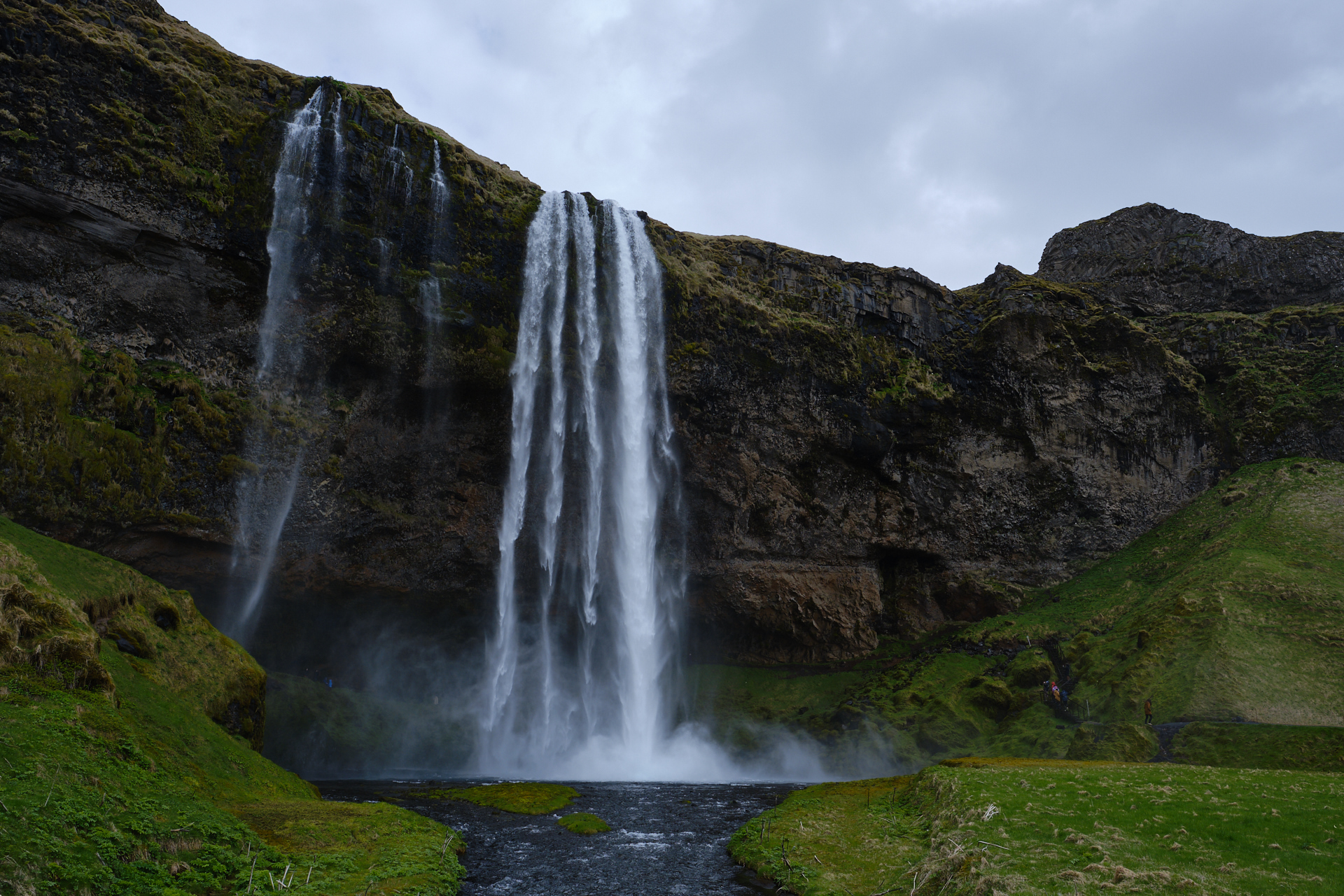 These are two very different waterfalls, the Seljalandsfoss is out in the open, and you can even walk behind it (get ready to be at least a bit wet though), while the Gljúfrabúi is a small walk further away, half hidden inside a small canyon. You can also walk close to the falling water here, but getting drenched is totally inevitable. 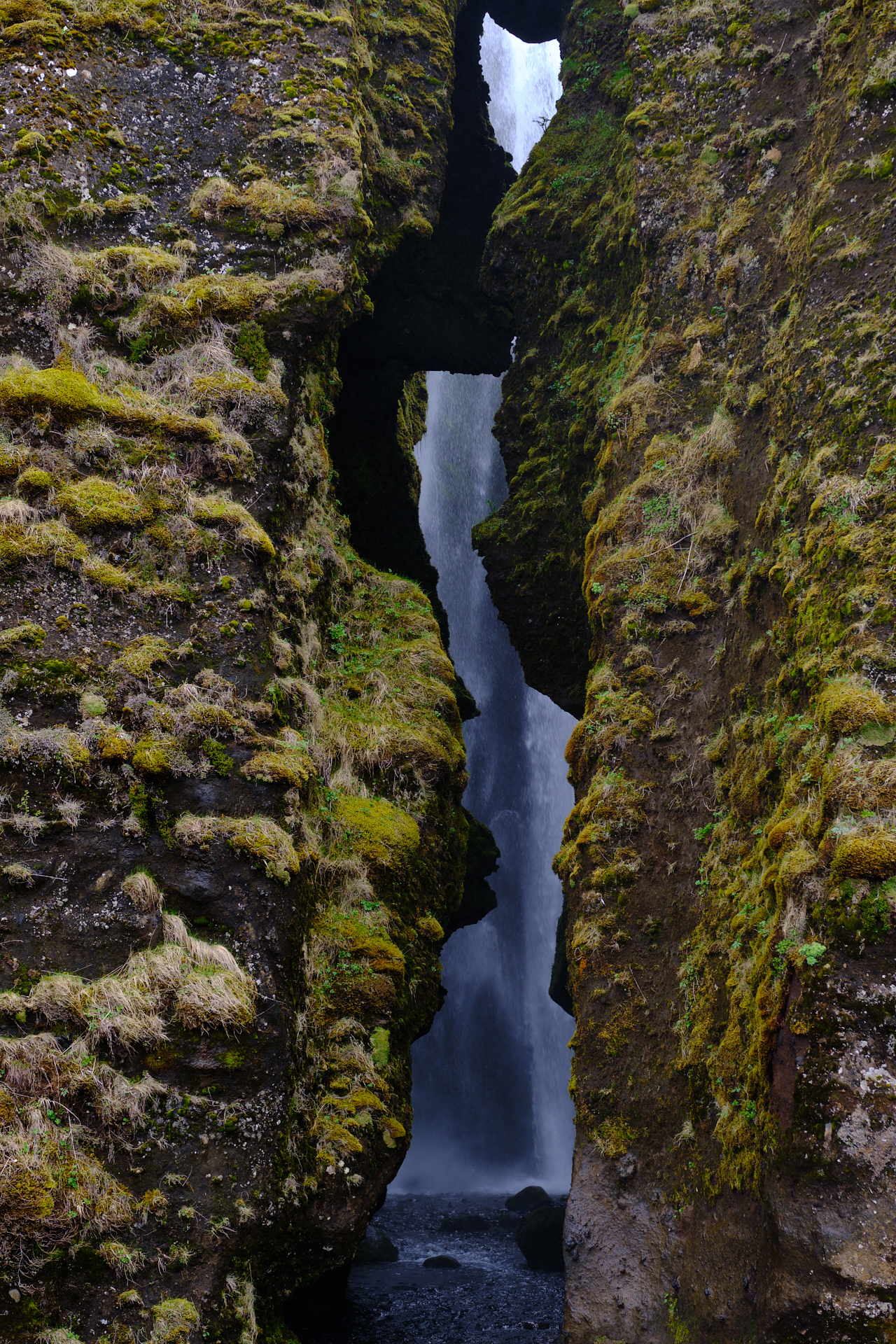 Less then a half hour (and some good views to the snow covered Eyjafjallajökull volcano) further is Iceland’s most photographed waterfall, the Skógafoss. Its wide water curtain is unquestionably an impressive sight, but if you want to take a picture without tourists, be prepared to wait for a while even in the pre-season… There are also a lot of birds (seagulls) nesting on the cliffs around the waterfall. You can also walk up and have a look from above, but we skipped that and did something more off the beaten path instead. 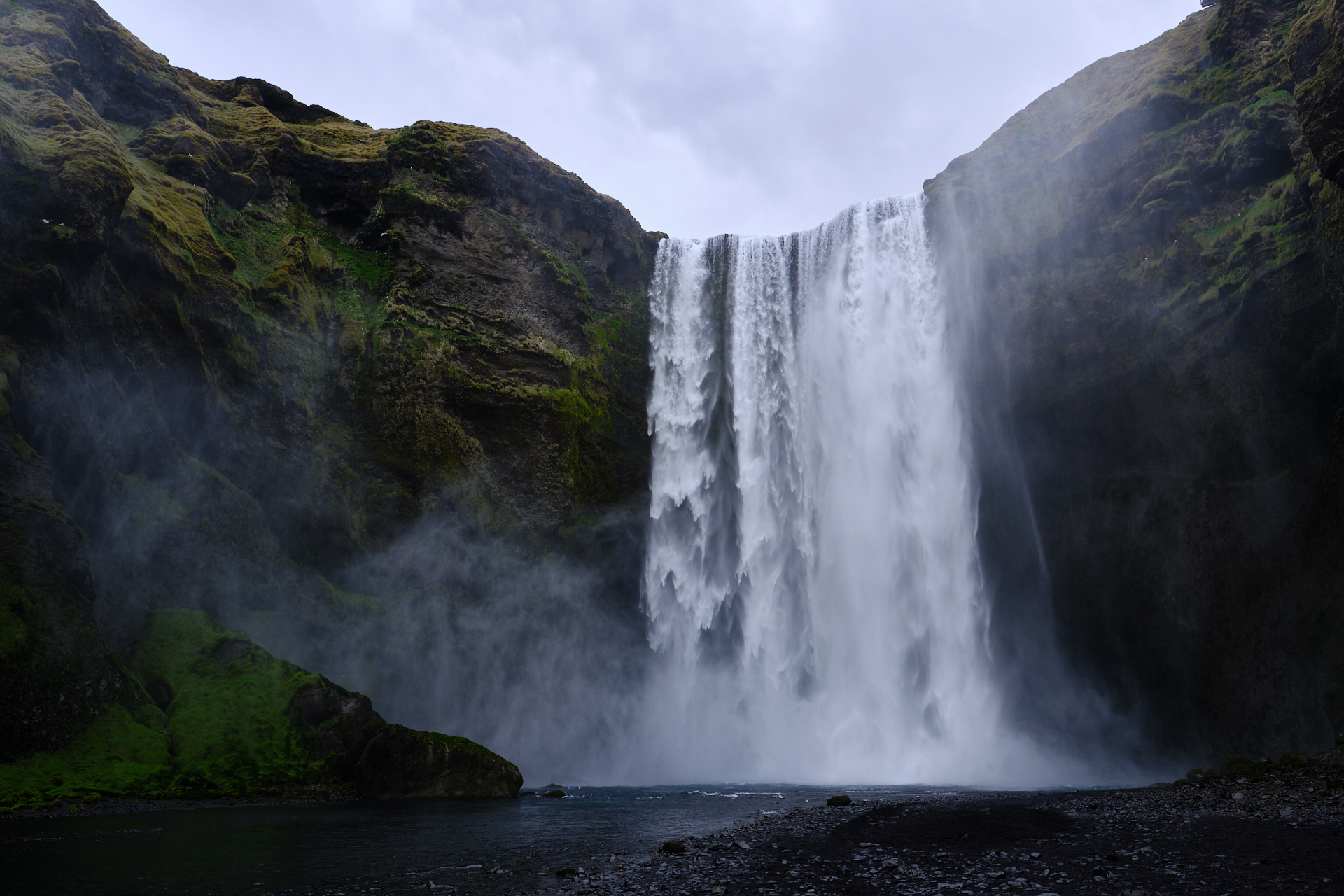 So there is another more hidden waterfall just around the corner, the Kvernufoss. To get here it is the easiest to drive to the parking of the Skogar Museum, and then follow the walking path to the East. In less then one kilometre you will be at the end of a deep green valley, facing a tall, narrow waterfall. You can also get behind this one (although we did not). It is a very nice walk, with likely nobody else around (we met one other couple on the trail). 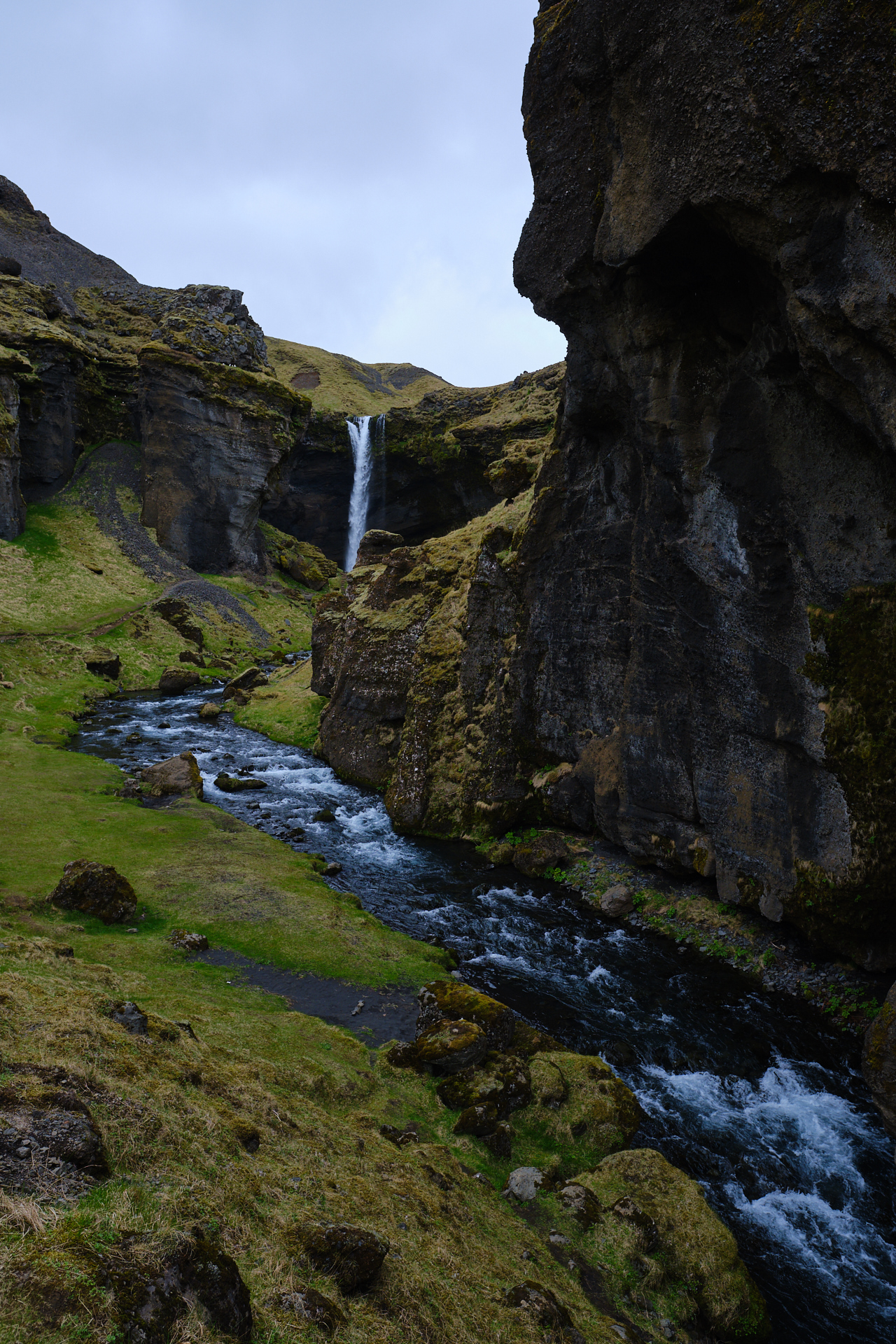 From here we had only a short drive left (with nice views to the mountains and wide river beds to the left) to reach our accommodation for the night, the Farmhouse Lodge, but we were not yet done for the day. After checking in we got back to the car and drove to Vik (over a small but very picturesque pass) to have dinner in The Soup Company (not only good soups, but great cakes too). 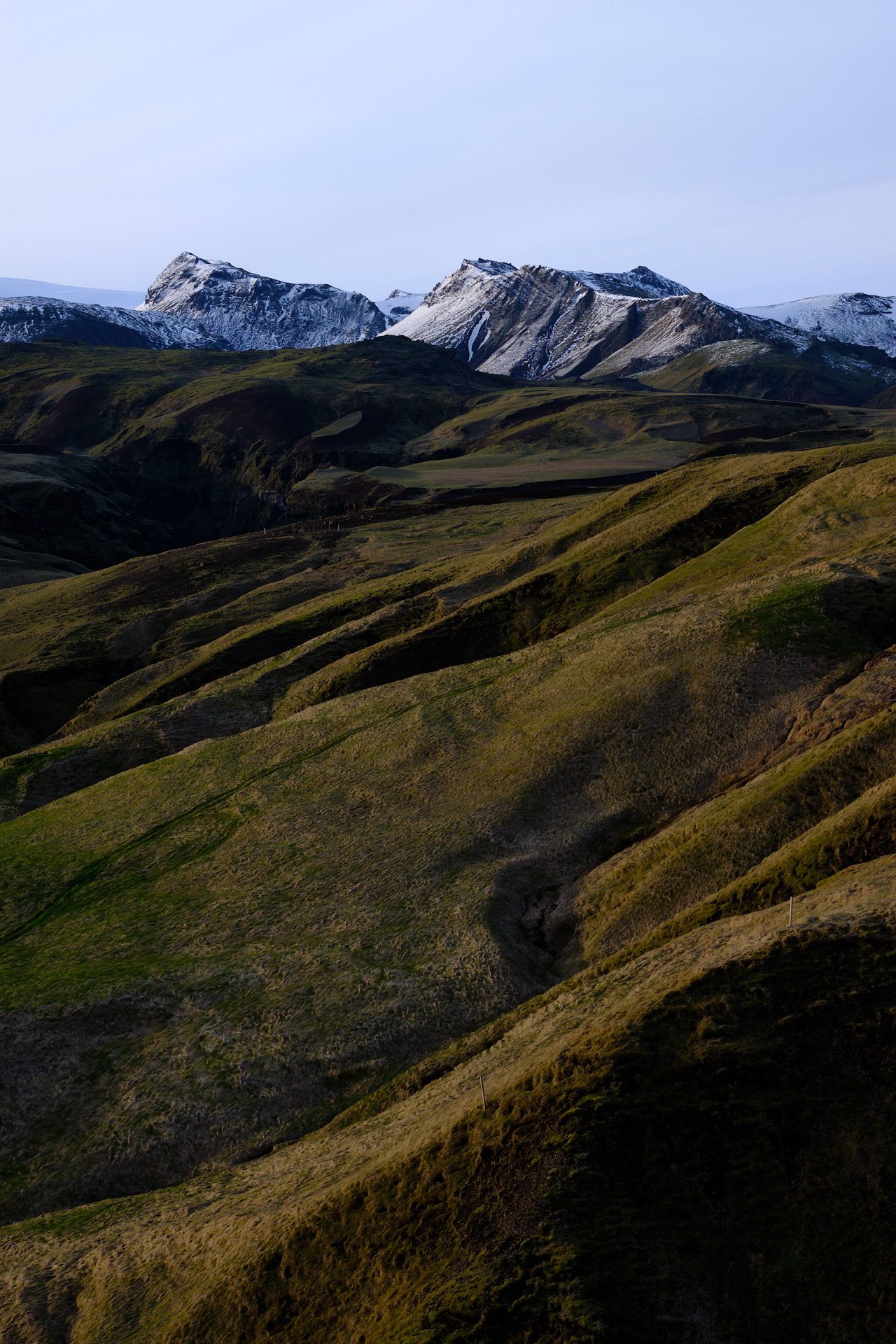 Then we drove back over the pass (see view above) to Reynisfjara beach, which is famous for its basalt columns (definitely the most photographed ones in Iceland) and black sand/pebbles. It was a bit too busy here to get the picture I originally wanted (as some guys were chilling on the basalt columns with their beers…), but it was very nice nevertheless. 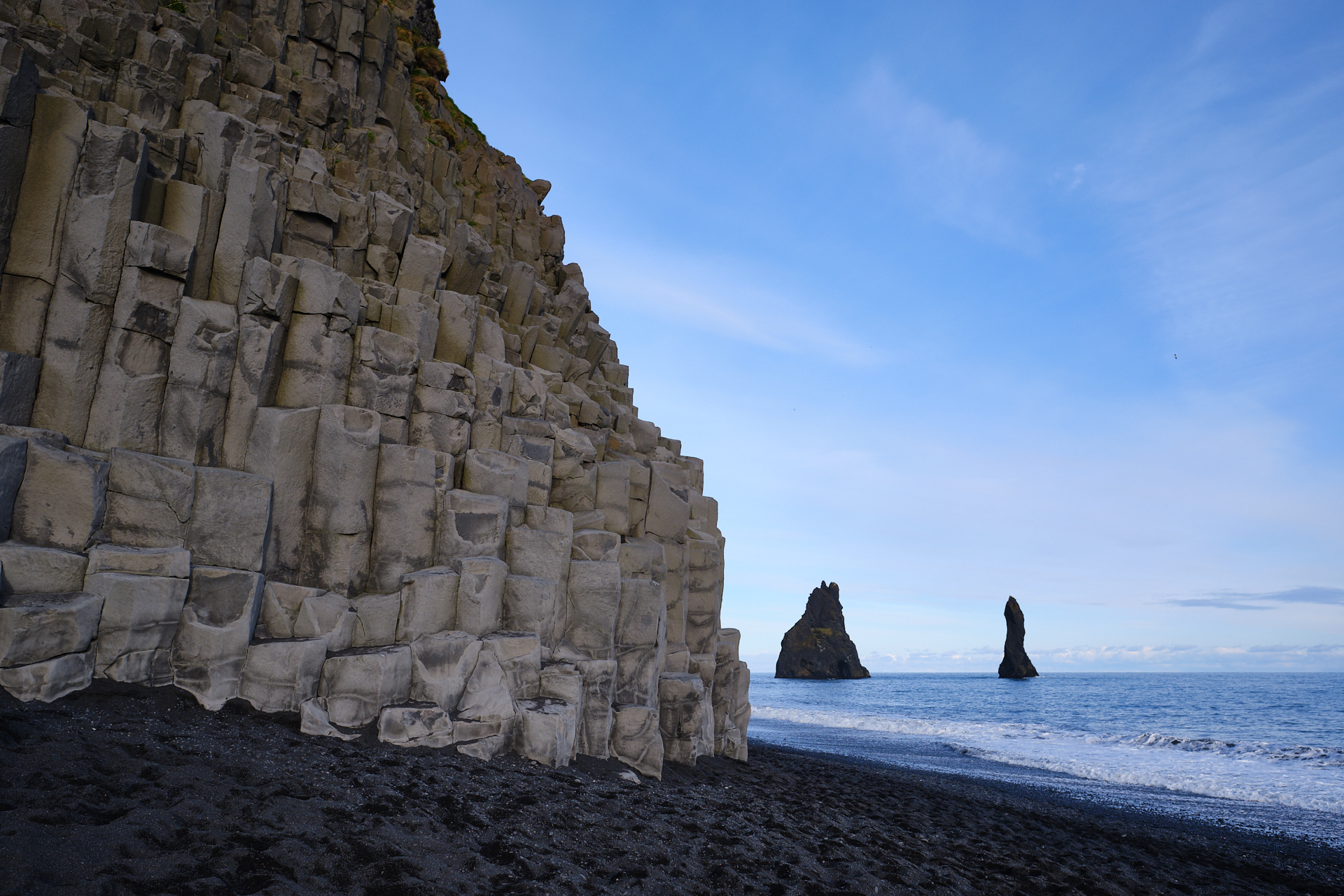 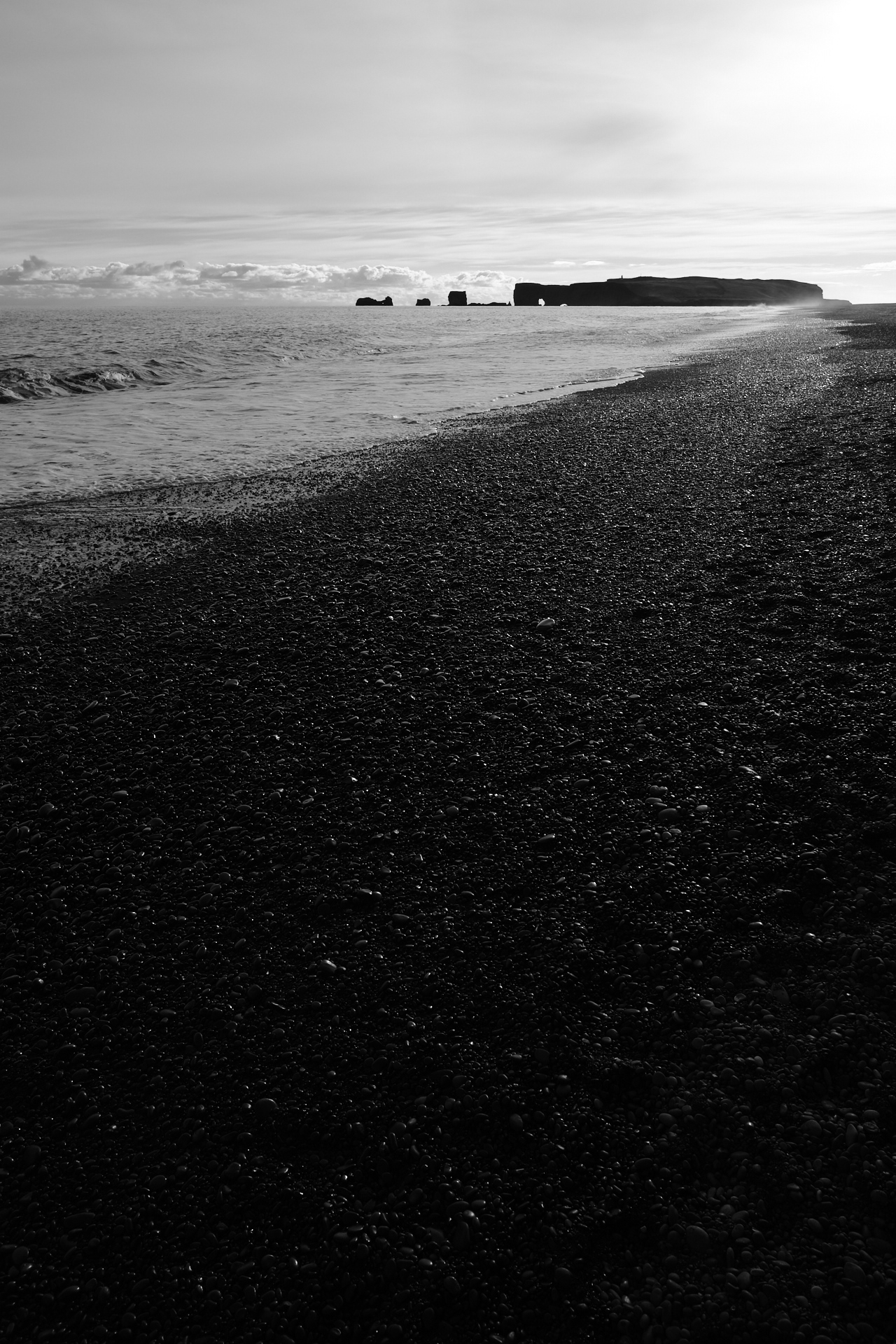 Finally we wanted to close the day by driving to the Dyrhólaey rocks, but unluckily you can not do that after 19:00 at this time of the year because the area is closed to protect the nesting birds. Still, we got to enjoy some nice views from the beginning of the small peninsula before driving back to our Lodge. 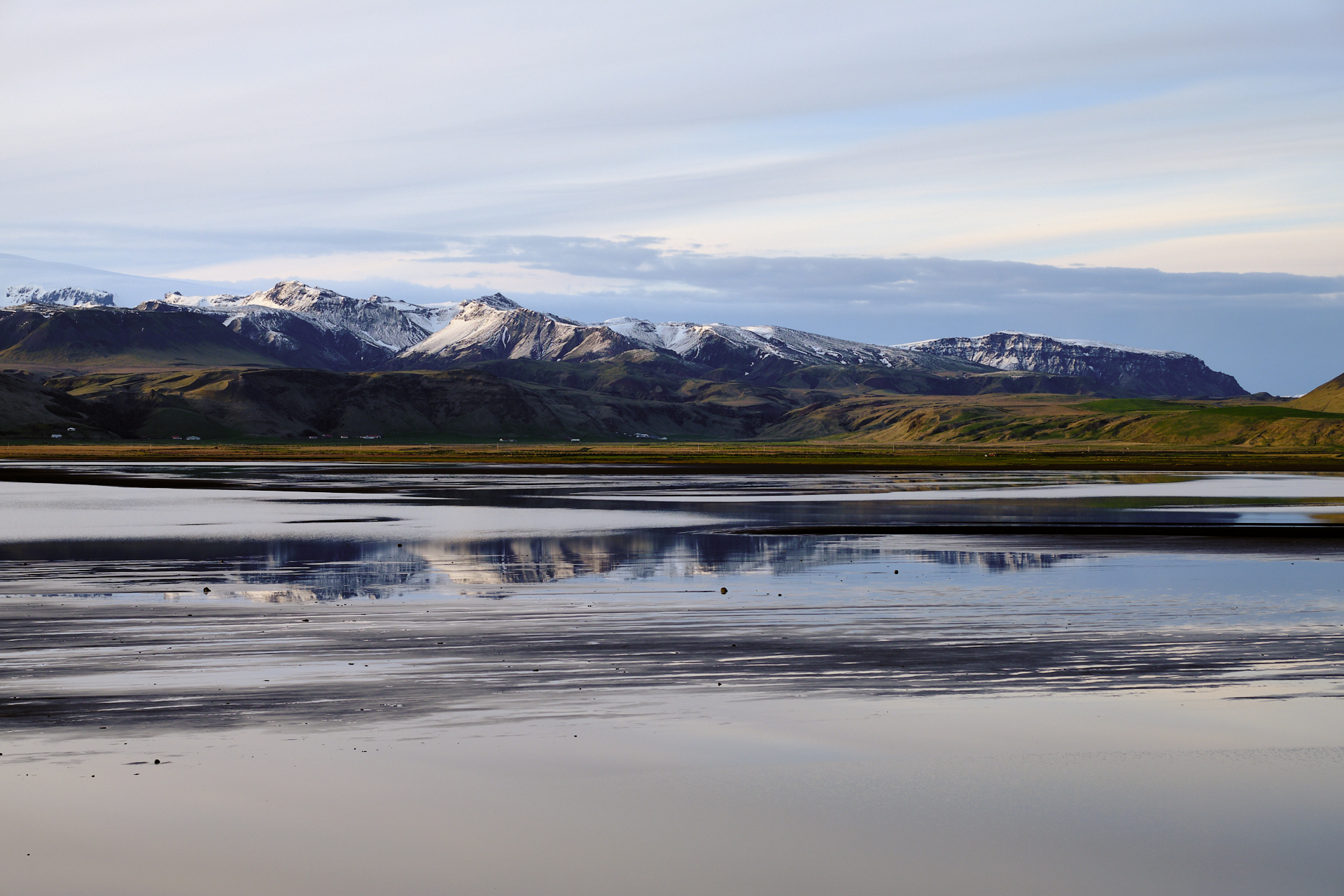 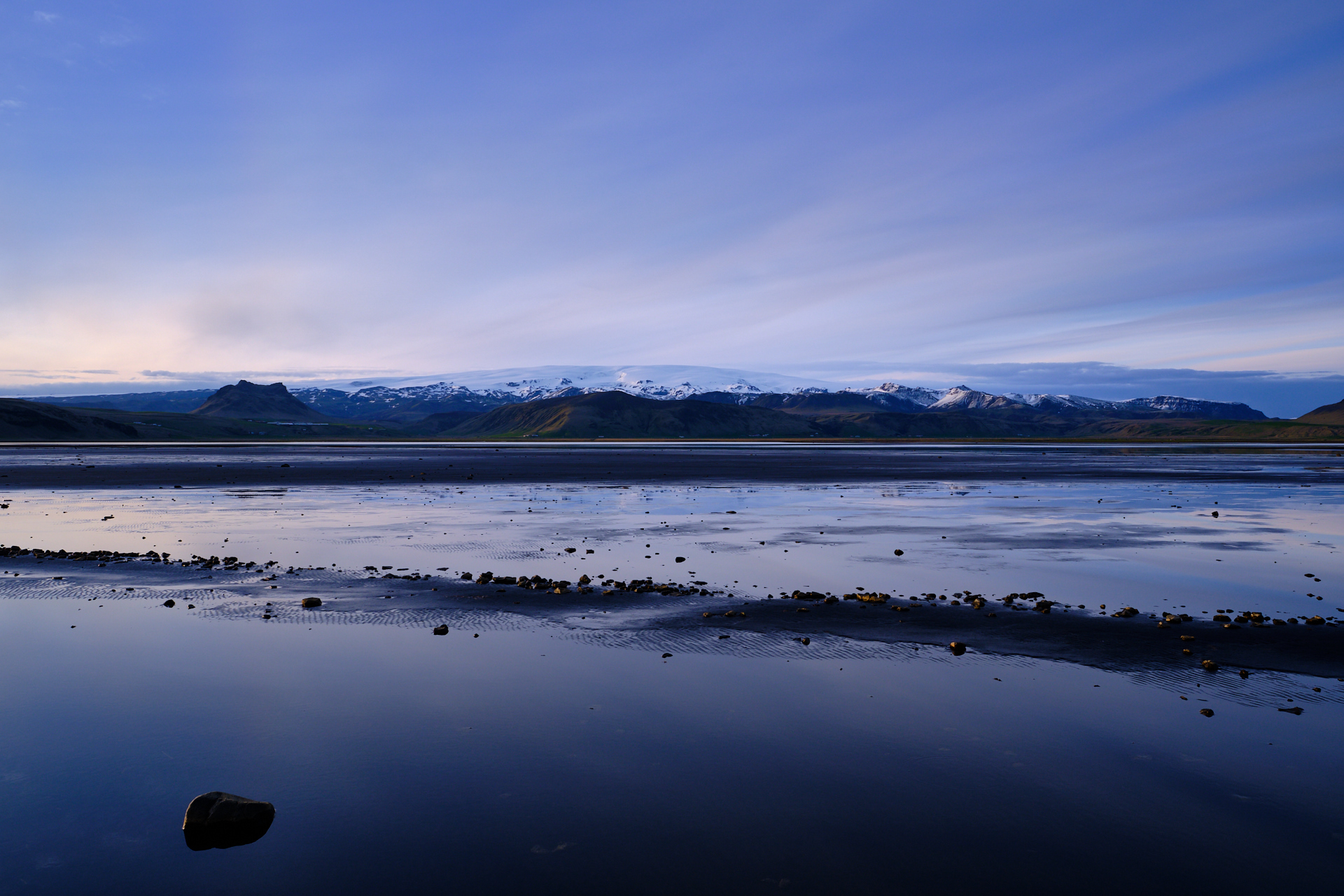 The sunset was very pretty behind the mountains, and the forecast for the next day was nothing short of (ok, except for maybe a few degrees Celsius for Clio) perfect weather… 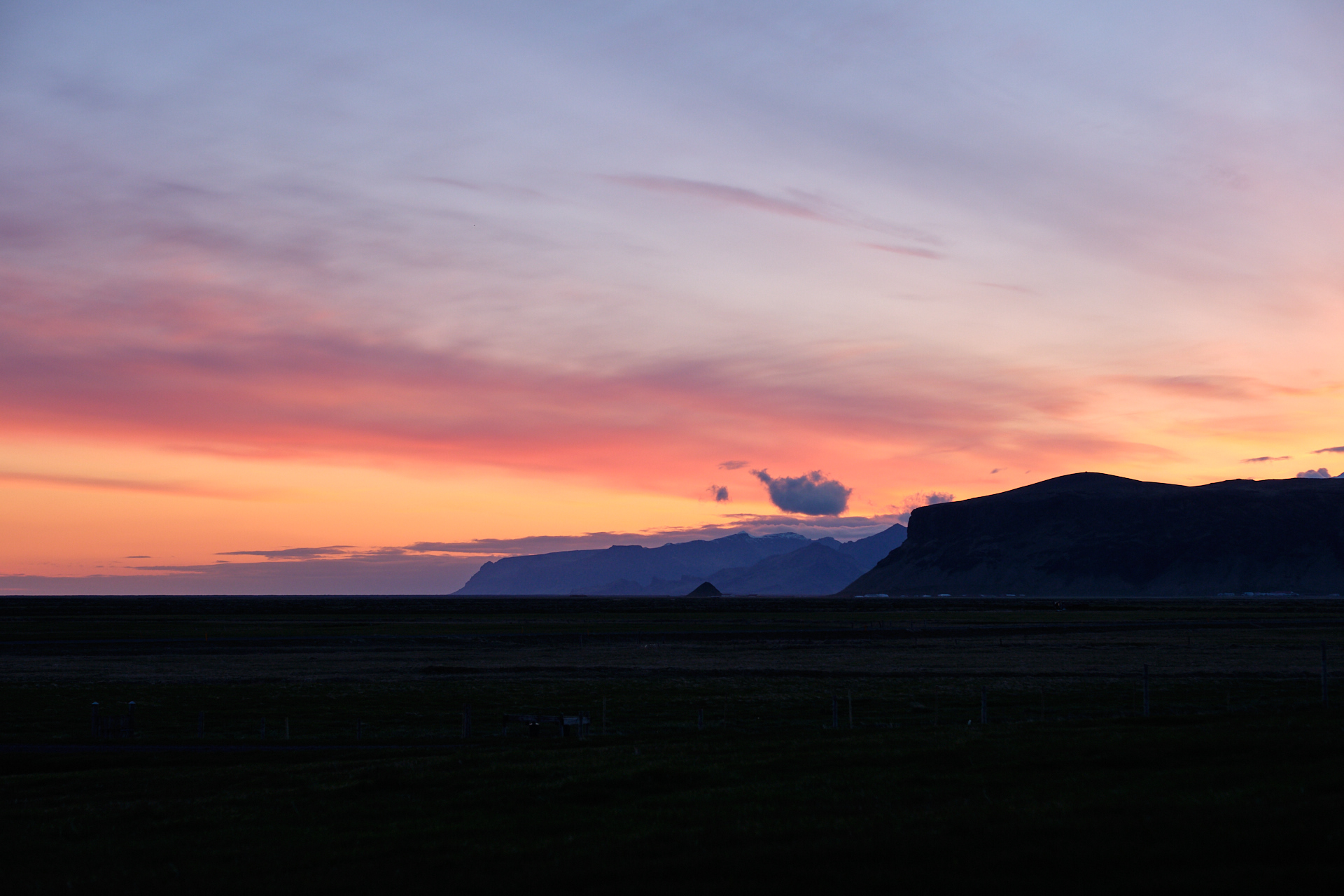