This was finally going to be a good (or easy) day for photography, with clean air, sunshine, and beautiful vistas. We also did not really have to hurry with our breakfast, since the originally planned drive to the camping and hiking site of Þakgil (hidden in a nice canyon at the end of a gravel road) was not yet doable even with a 4WD (for current road conditions, always check the website of the Icelandic road network). 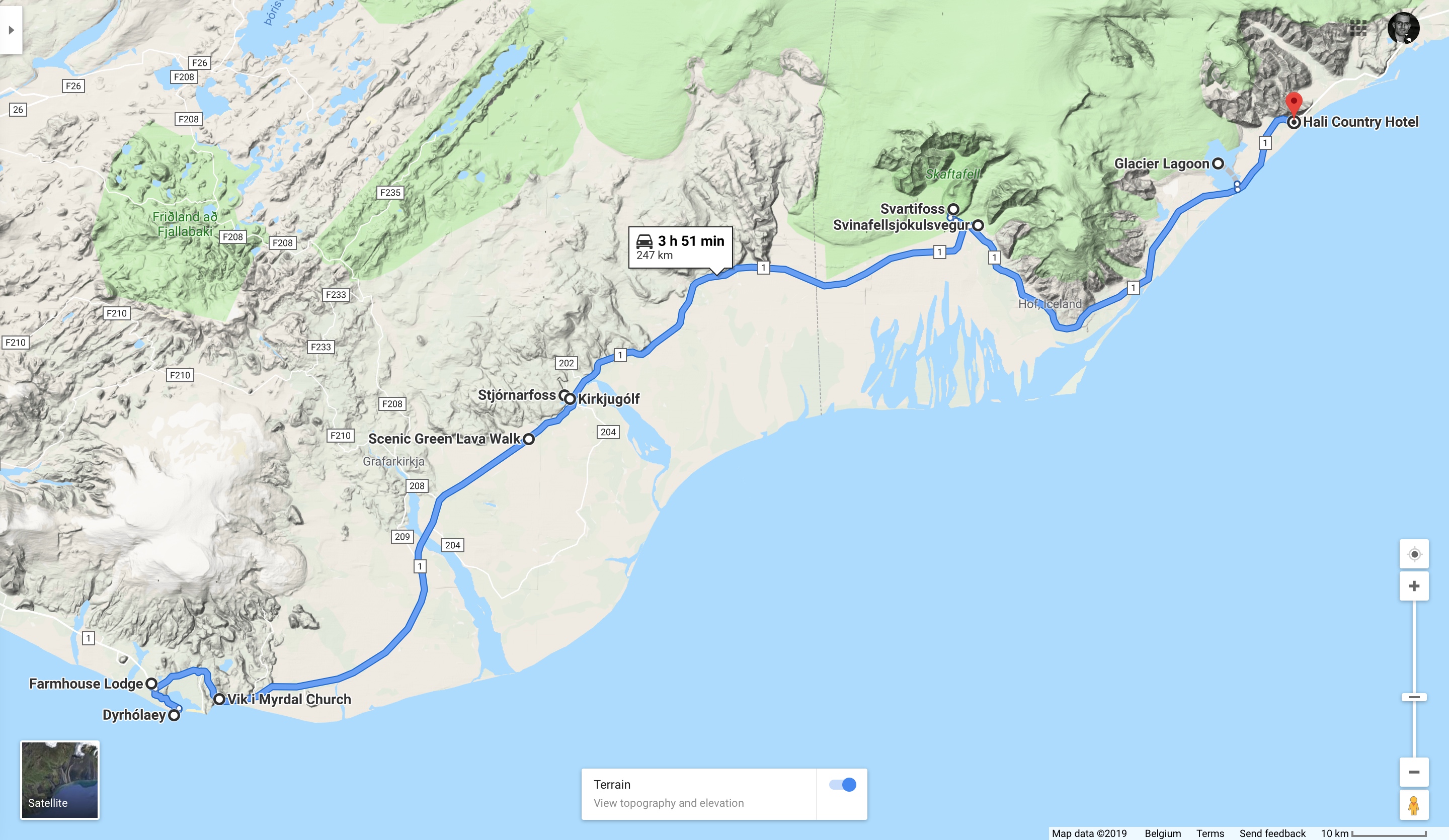 We left our lodge around 9 and drove immediately up to the Dyrhólaey rocks. The last few hundred meters of the ‘road’ climbs over a steep and narrow series of gravel switchbacks before reaching the small parking on the top. I though this section was super fun, Clio was less enthusiastic about it :D The view from the top of the rocks was very nice; standing over the edge of the cliffs and looking over the black sand beaches towards the West below really gave the feeling of flying over the landscape. 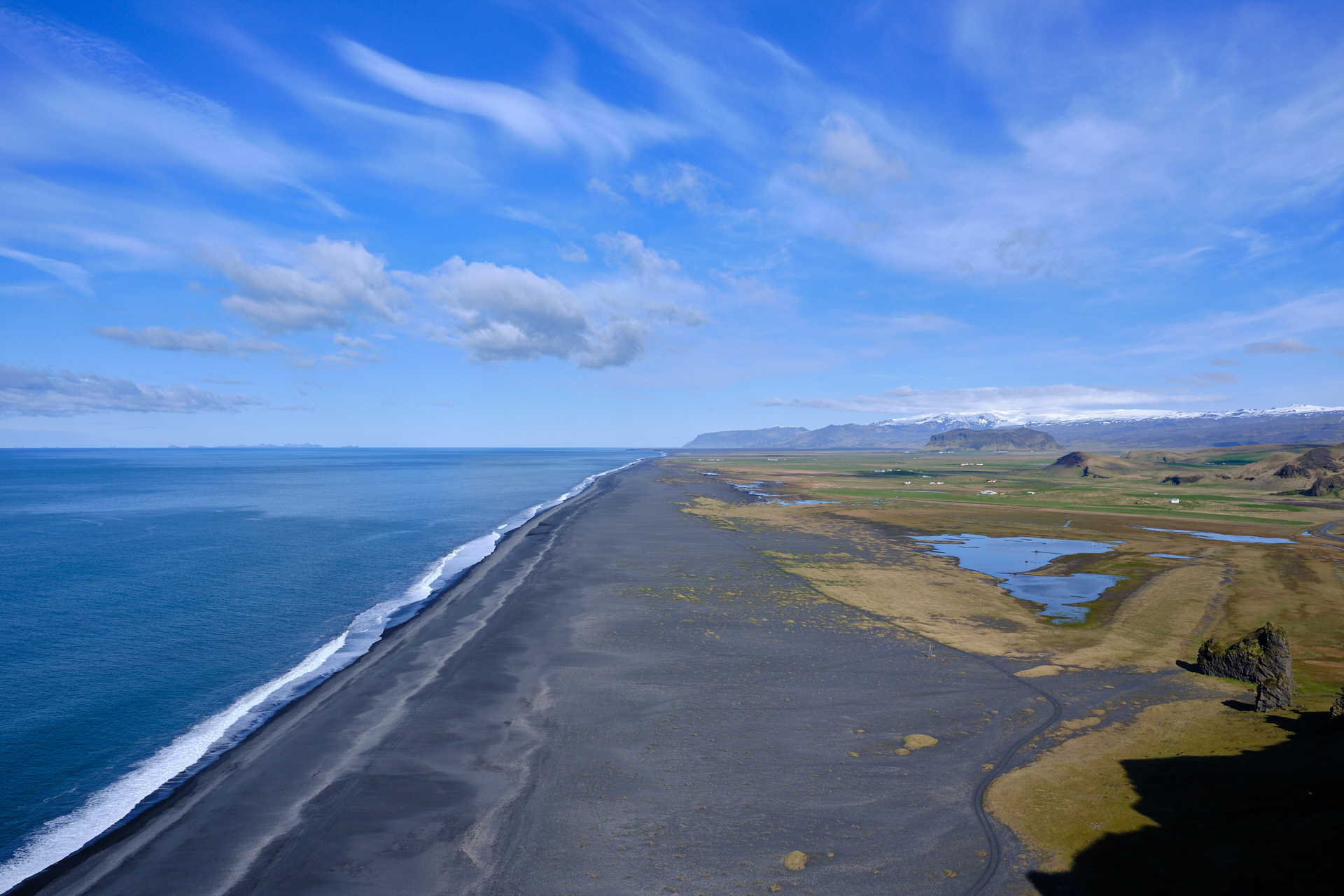 To the North we could see tall, ice covered mountain tops, and to the South – after a short walk past the lighthouse with a small red lantern room  – a massive stone arch bending over the sea. We also stopped at the other parking over the Eastern side of this small peninsula, which gave a better view towards the black sand beaches and rock pillars towards Vík. 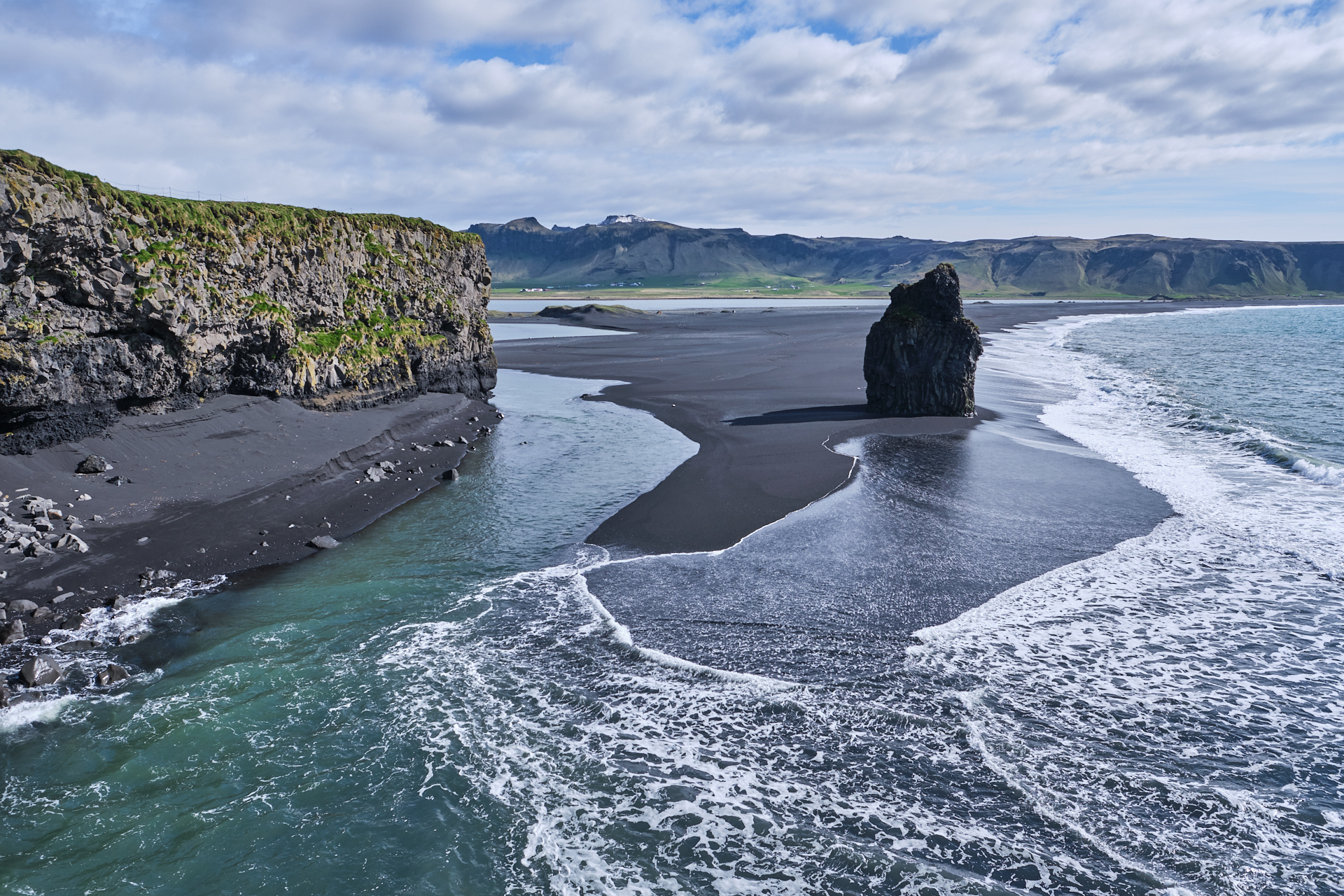 This was also the Southernmost point of our road trip. From here we drove to the church of Vík (over the same – still pretty – pass that we had already taken twice the previous day), which by itself is not so special, but it provides another nice lookout point over the region. The next bigger stop on our list was the Fjaðrárgljúfur Canyon, so we had a longer drive in front of us. On the way there we stopped at a place where you could walk around a bit in a huge field of green (moss covered) lava. 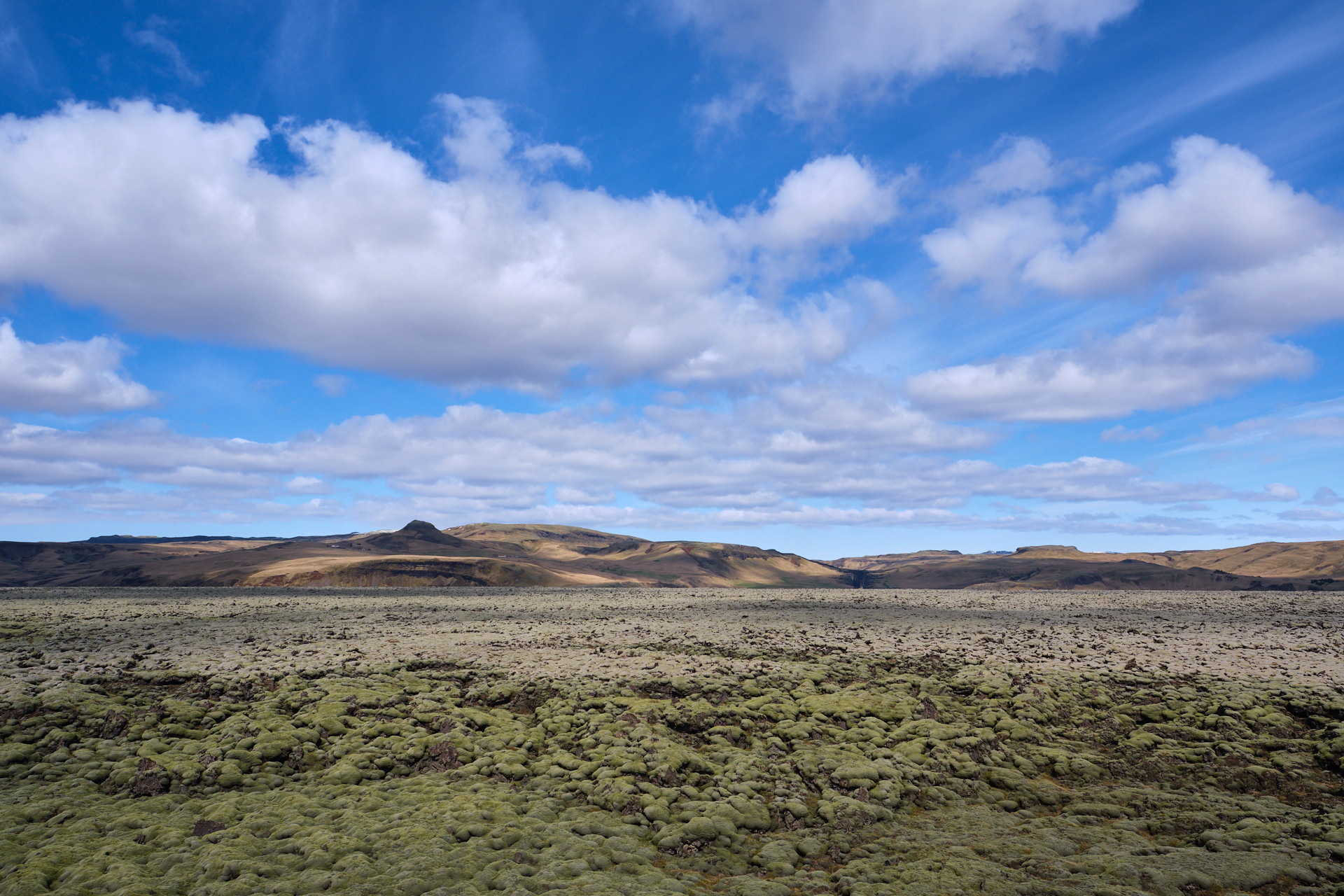 Unluckily the road leading to the canyon (and the canyon itself) was not accessible, and not only because of thawing, but also because the canyon became so popular in the past years (partly due to a music video clip being shot there by Justin Bieber…) that the Environmental Agency of Iceland has decided to close it to allow the trails and vegetation to recover a bit. I was pretty sad (maybe even devastated) about this, because I was really looking forward to taking some nice pictures here. Luckily I was prepared and had some backup sights just in case, so this meant no real disturbance for our schedule. (Not that a bit of extra time to chill and relax would not have been welcome :D) 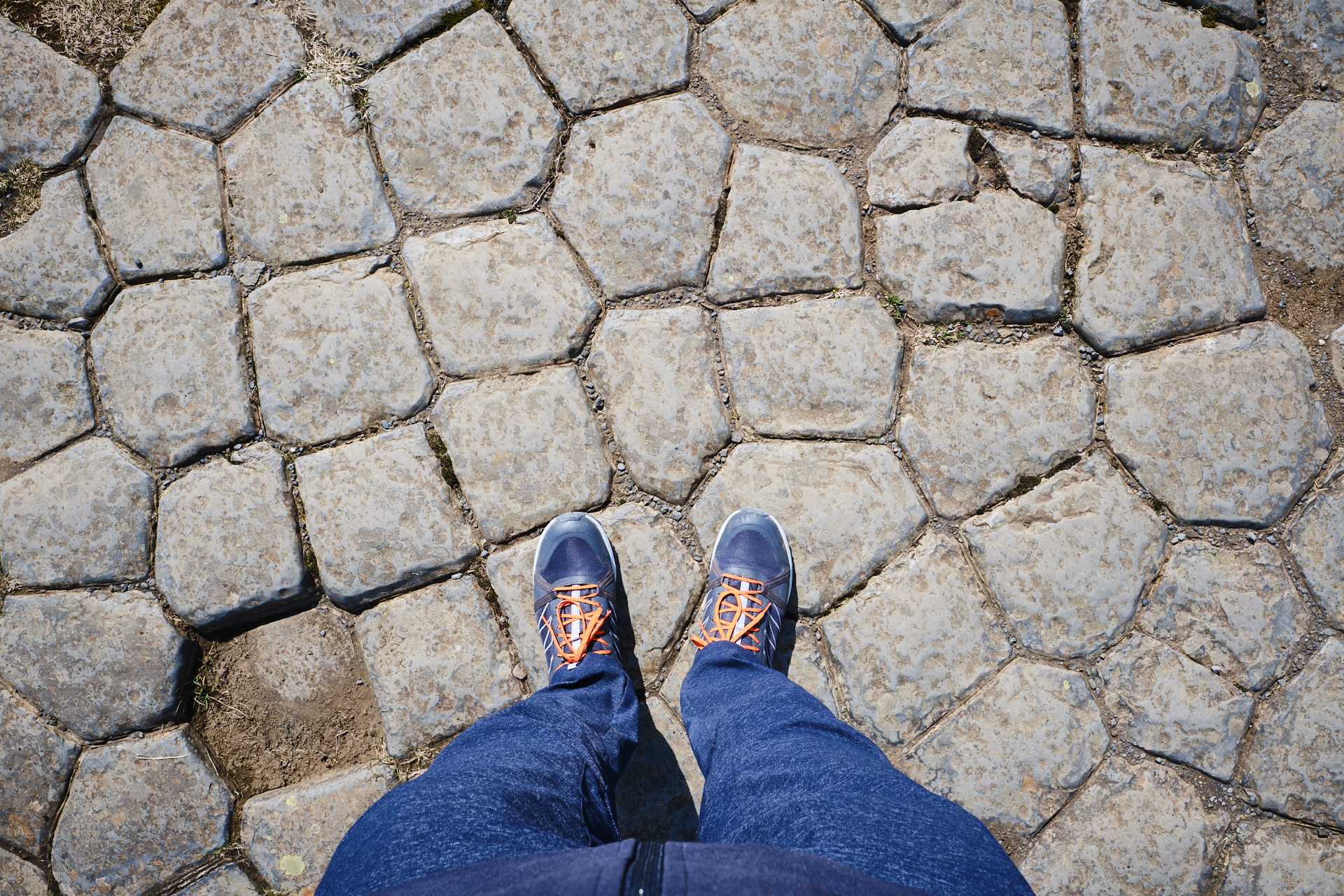 Just a small drive further we stopped at Kirkjugólf, the “church floor”, where the typical hexagonal basalt pattern forms a flat floor surface that you can walk over. It is such a hidden sight, but I really liked how special it was. Then just a bit further from the ring road we also visited the Stjórnarfoss waterfall. 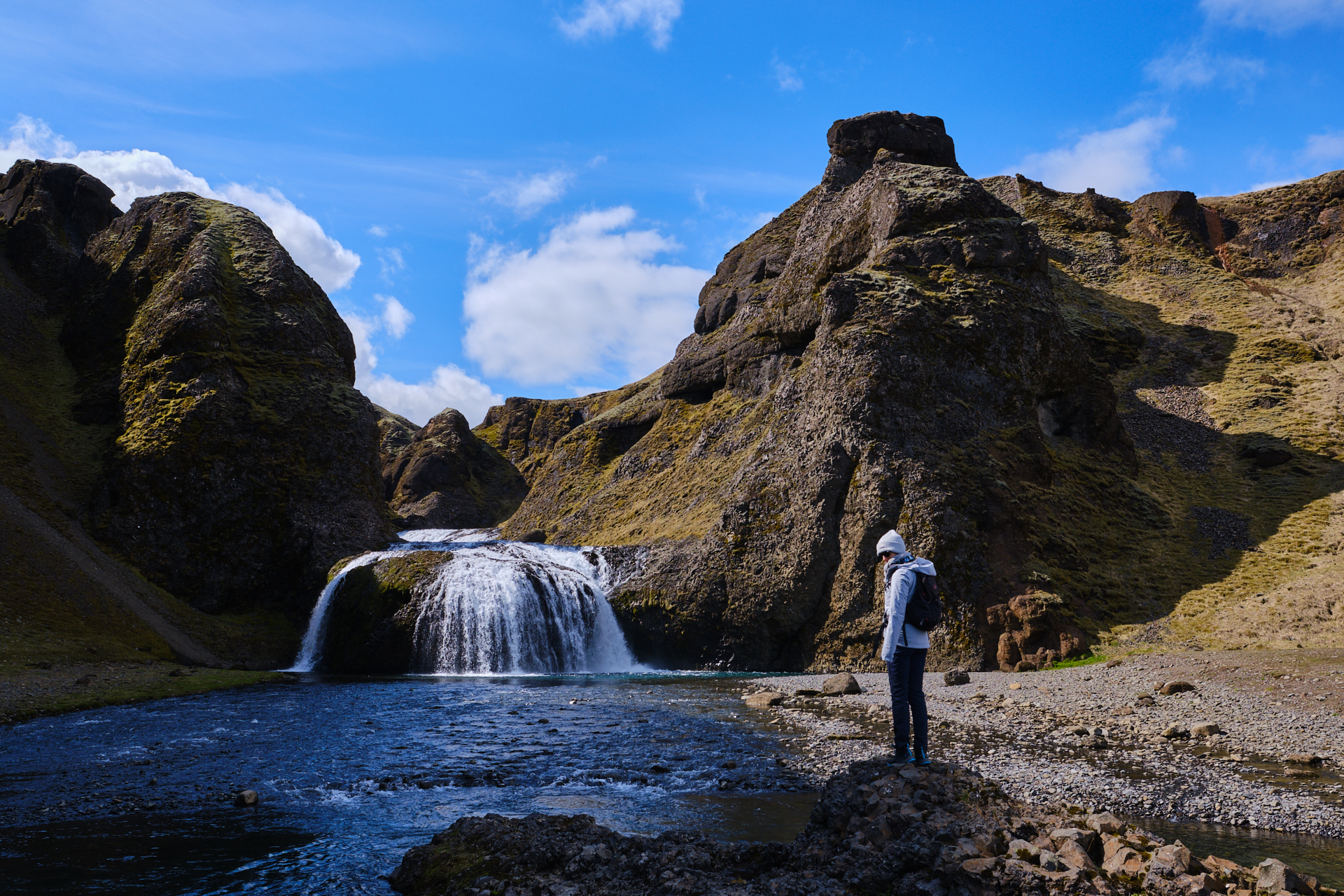 The drive further towards the Vatnajökull National Park was very scenic, we passed by and stopped at various waterfalls (thin and tall, or wide and long) and river beds cutting through the ever changing colourful landscape. 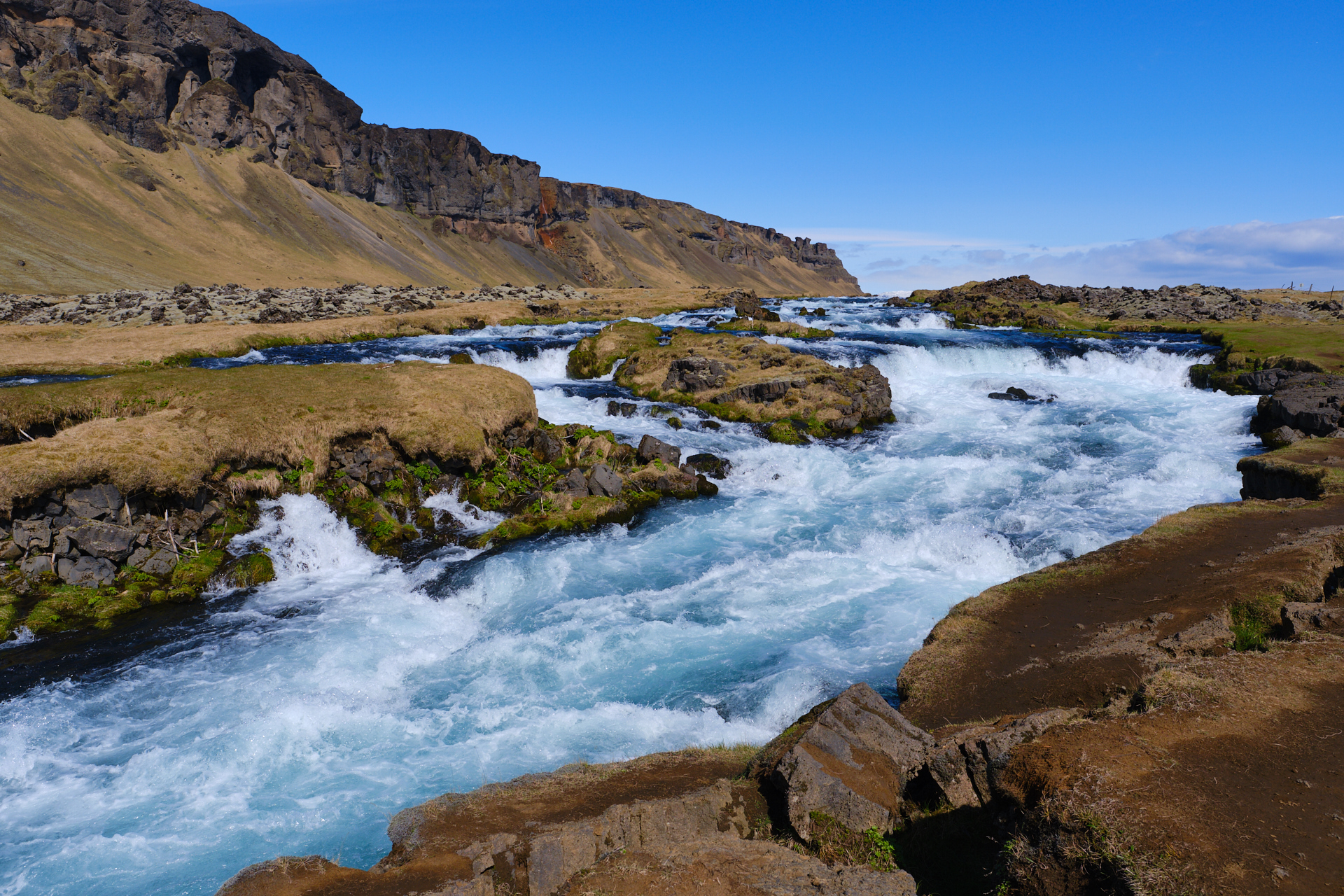 Then just before reaching the National Park, as the views suddenly open up towards the steep, glacier-carved mountains, it is impossible to not stop for a short break, trying to take in the panorama. There is actually a nice designated view-and-information-point (Skeiðará Bridge Monument) just a bit further down the road from where I stopped. As the weather was super nice (and I definitely wanted to take pictures in those exact conditions at the glacier), I decided to first drive to the Svinafellsjokulsvegur. (Normally if you just follow the ring road you encounter the two following locations in the other way around.) The little bit longer than a kilometre long gravel road leading almost to the very end of the glacier was the worst road we have taken on Iceland; it was very broad, but irregularly scattered with deep potholes almost along the full length (and width) of it. 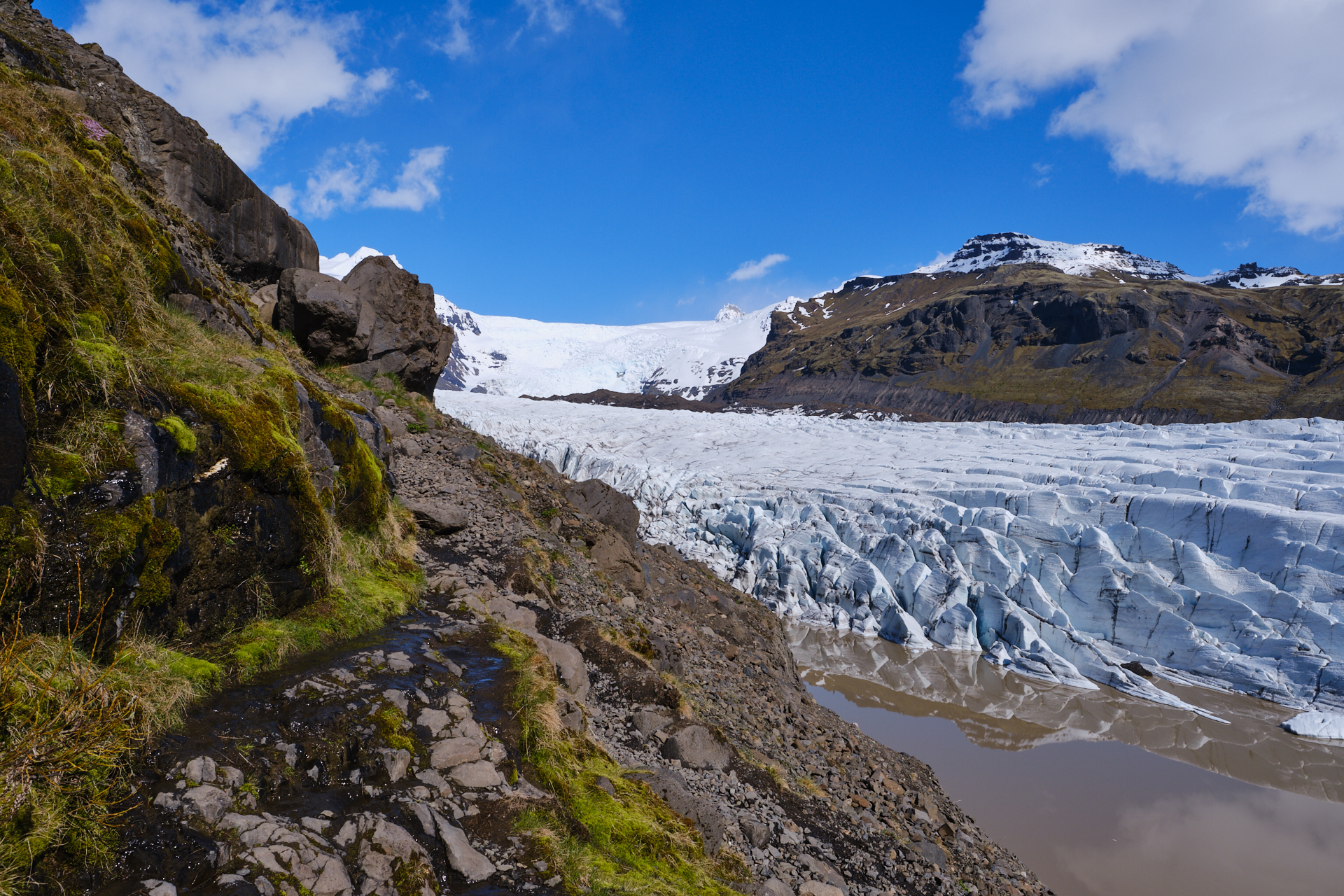 It was not an issue for our car, but I had to drive very slow and carefully find a way around the deepest obstacles. From the parking it is not more than a five minute walk along a narrow trail to reach a few nice panorama points. The cracks and crevasses give the ice-flow its characteristic look, wedged between the tall, snow-capped mountains, and the brown meltwater below. 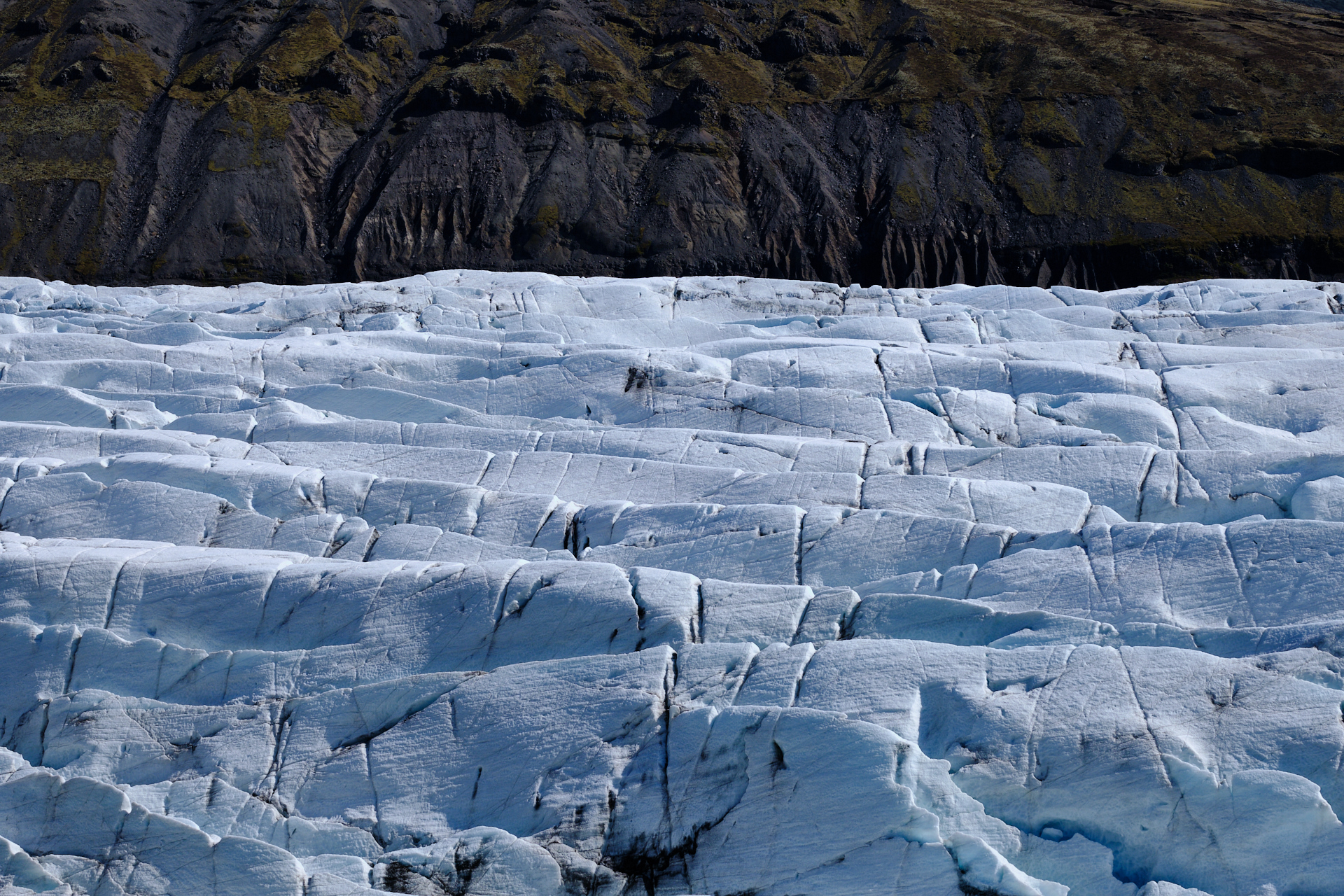 From here – after carefully making it back across the gravel “superhighway” – it was not more than a few minutes to make it to the parking of the Svartifoss. To reach the waterfall itself we had to make a small hike, following a 2.1 km long trail (and then the same back) and climbing almost 200 metres along the way. The route itself was also very nice, with great views to both the taller peaks to the right, and towards the flat, wide riverbeds over our shoulders in the opposite direction. The waterfall itself is not especially tall or wide, but its water flows from the top of a wall of textbook basalt columns. It is definitely worth the hike. 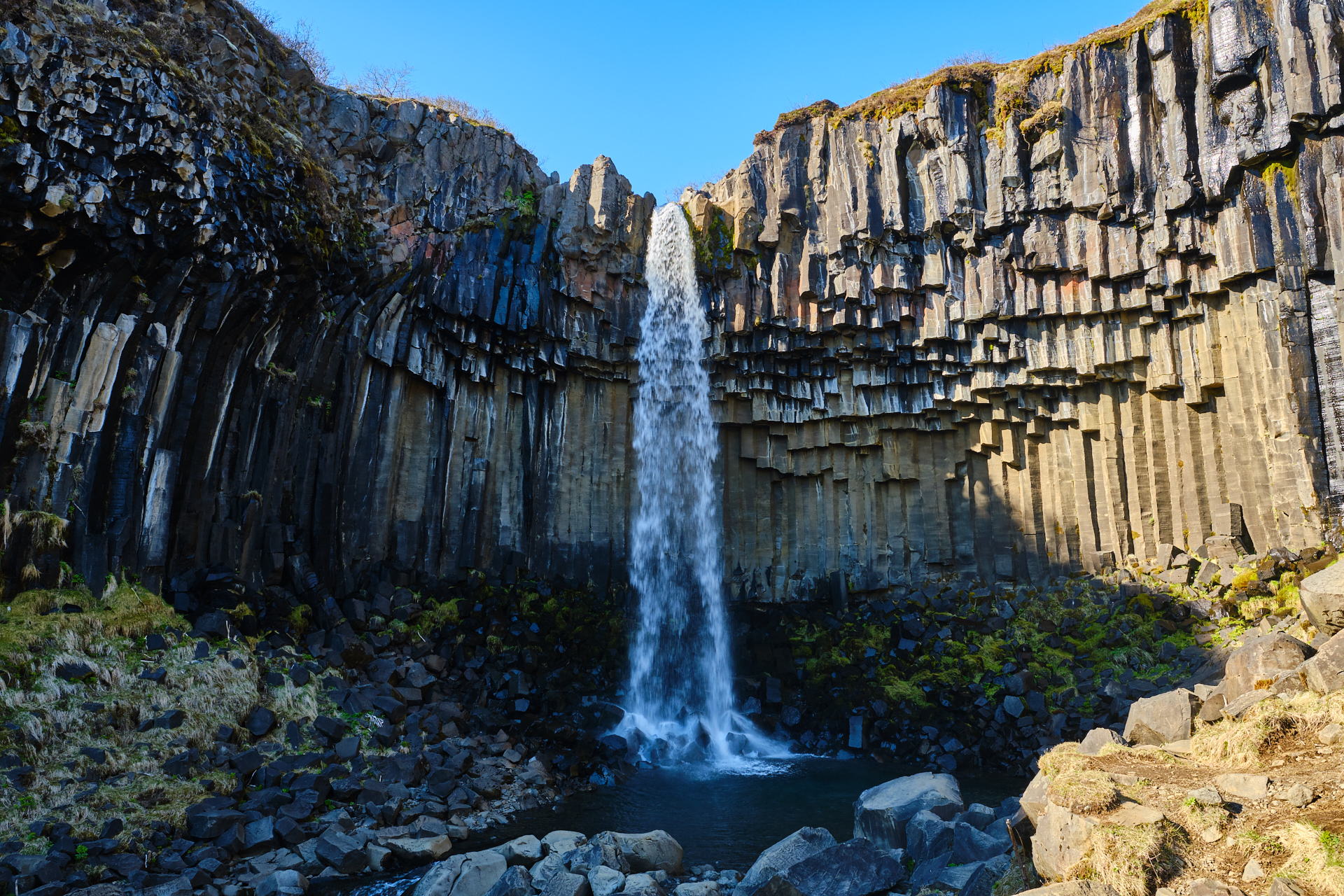 By the time we arrived back to the car it was already around half past five, and according to the original plan our next destination would have already been our hotel for the night, but the weather was so beautiful that we decided to still sop by the Jökulsárlón Glacier Lagoon and the Diamond Beach (even though we were also getting quite hungry since – for the first time – we only had snacks and no real food during the day). The Glacier Lagoon had a real arctic feeling to it, everything was blue or white, there were seals swimming between the icebergs, and the low sun gave no warmth at all. This was really one of the most magical places on Iceland. 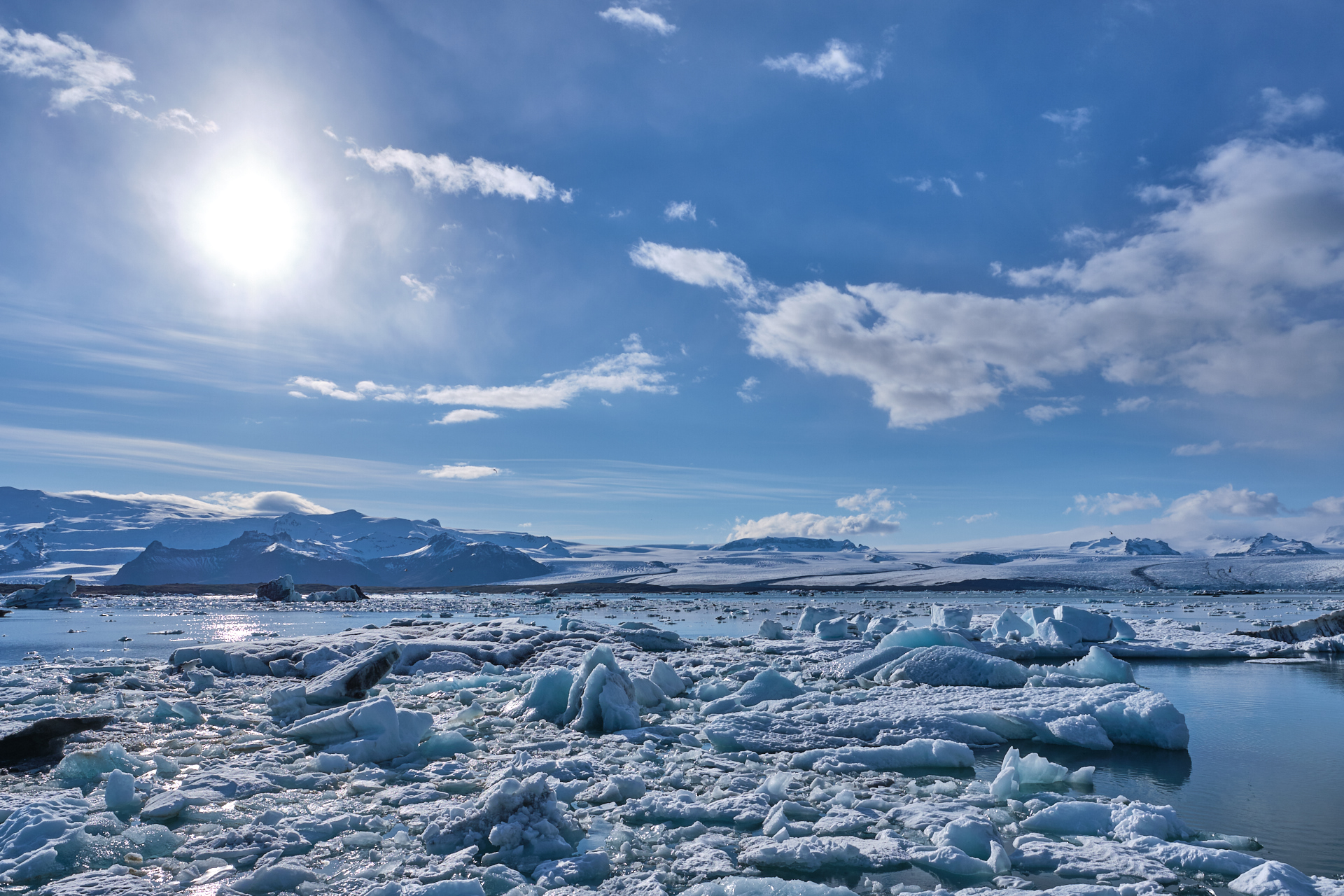 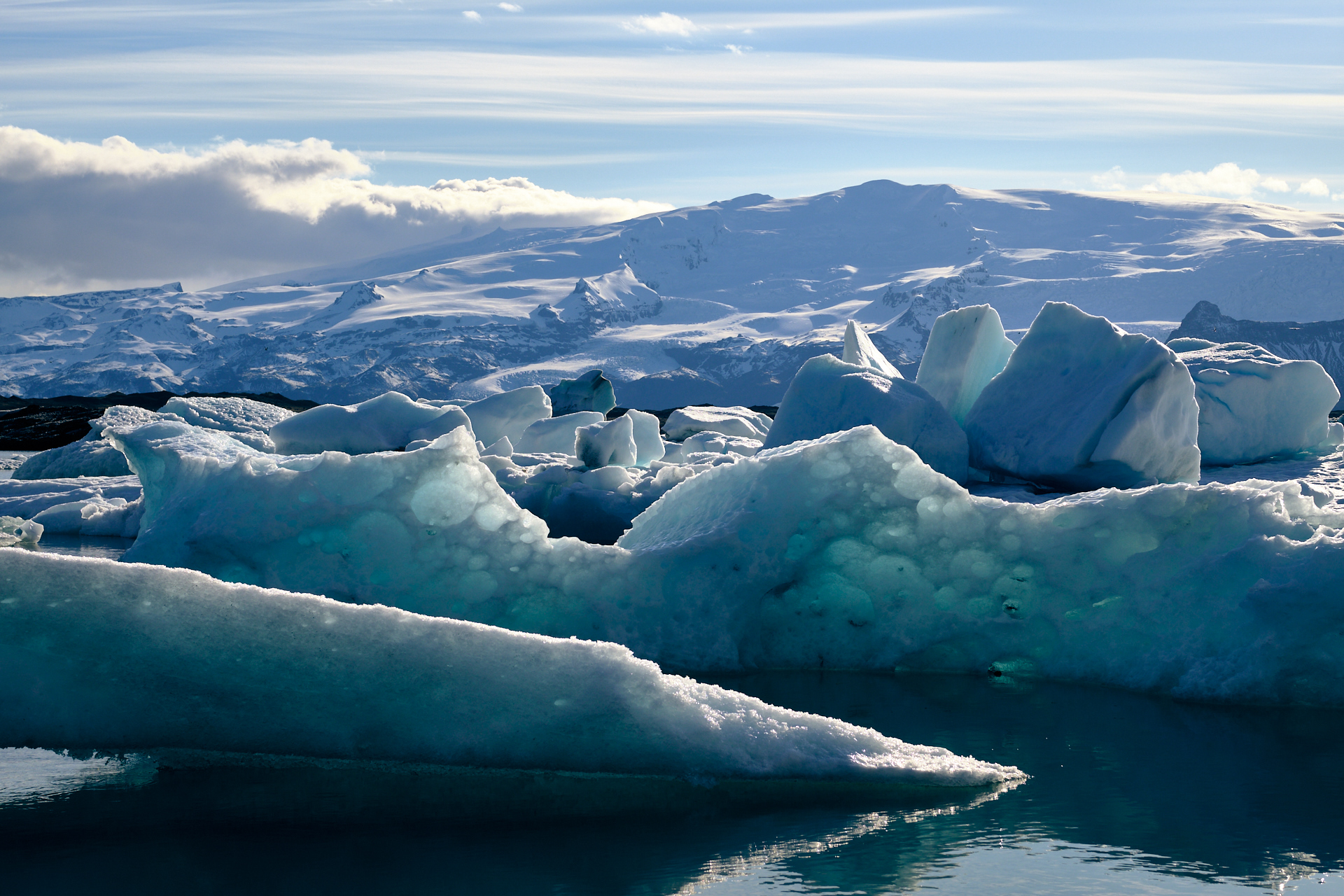 As crystal clear meltwater and icebergs flow out via a narrow channel (under the small suspension bridge of the ring road) from the lagoon (looks like a lake, I would call it a lake) to the sea, waves and currents distribute varying amounts and sizes of ice over the black beaches, creating what is known as the Diamond Beach. Much of the (relatively) smaller (but still easily dog-sized) pieces of ice lying (and very slowly melting – especially in the 3°C we had there) on the shore are completely clear and transparent, which makes them shine like diamonds in most lighting conditions.

I knew I wanted to come back here around sunset, so I did not spend much time taking pictures here, instead we drove to the Hali Country Hotel to check in and have dinner in their restaurant.  The views along these few kilometres were amazing: we just entered the early minutes of the golden hour(s), driving along a straight section of the road surrounded by bright yellow grass fields scattered by mirrors of small lakes, head-on towards the mountains that were just barely lit from the side (therefore creating high contrast regions between rock faces in sunlight and their dark shadows), under a sky that was somewhere between deep blue and purple with a few well defined clouds here and there above the ridges… I was (and still am) so sad that there was no place to stop safely anywhere to take a picture. After dinner Clio stayed at the hotel (and went to sleep at one point), and I drove back to the lagoon and the beach with all my warm clothing and photography equipment.

I headed to the lagoon first to watch the sunset over the glacier in the distance (this was around 21:15). There was a huge amount of birds flying over the icebergs, and they made quite some noise! When the sun dipped below the mountains I drove over to the beach and also took my tripod and filters with me to scout for a good location amongst all the ice. 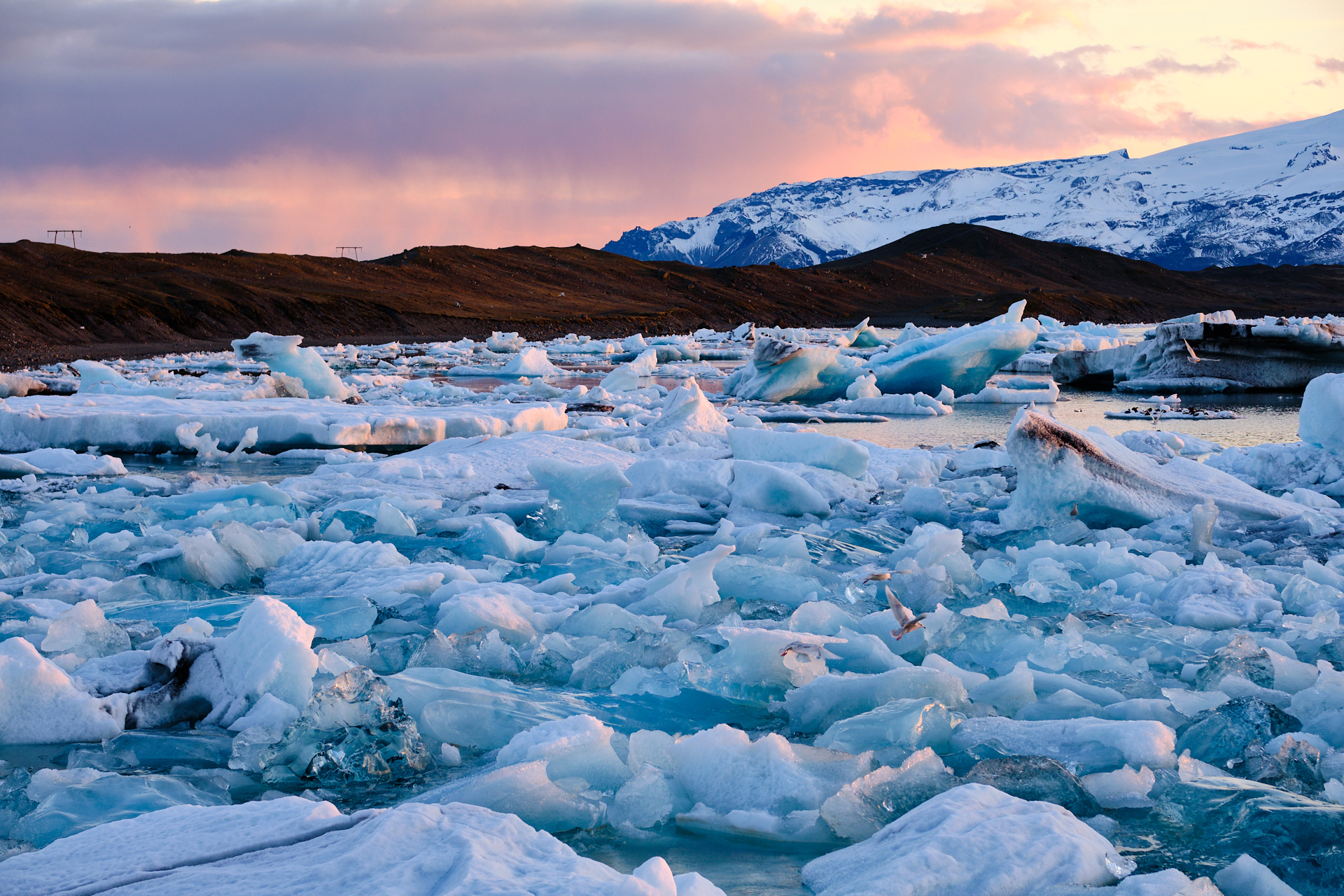 I wanted to make a long exposure image composing a stationary transparent piece of ice within curtains created by waves coming ashore, but actually executing this was not an easy task. First, I had to find a suitable piece of ice: nice and clear, at a good location (that other ice bergs create a pleasant composition with it), not too far from the sea (so the waves can still reach it), but also not too close (so I don’t get drenched in freezing water and the tripod is not washed away in the process). This was the most difficult part. Every time I thought I found a good spot, either the waves did not come far enough, or I had to run away (picking up the tripod in the process) to stay dry. At the end I still had some water over my shoes, but luckily my boots survived those few shallow waves without letting anything through. Even though I was not yet 100% satisfied, at 22:10 I decided that it was getting way too late so I had to stop. 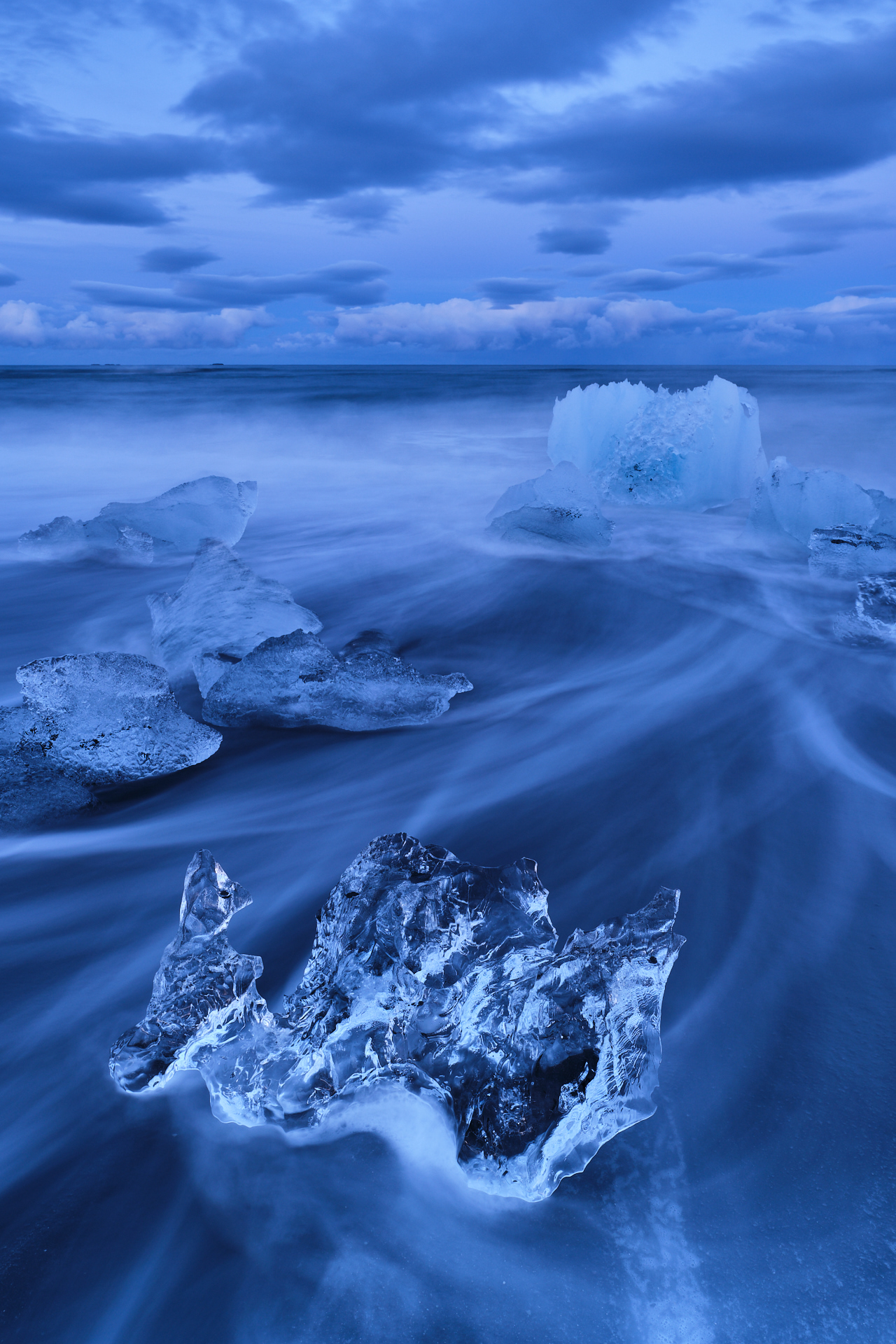 I still had a quick look on the other side at the lagoon before heading back, but there was not much to photograph anymore. It was 22:40 by the time I started driving back to the hotel, and dark enough that using my floodlights did not seem excessive anymore. I even saw a reindeer along the road. It did not take long to fall asleep that night.

And a quick reminder that on Flickr there are more photos in my Iceland album ;)