The easiest way to get behind your schedule on a road trip is thinking that you have plenty of time on a less busy day, and we did not want to make this mistake. While we did not have that many sights planned for the day, there was still a lot of driving to be done, so we did not spend too long in the warm, sunlit dining area of our hotel before hitting the road. The weather was pretty cold, but by this point we had gotten quite used to the Icelandic climate. 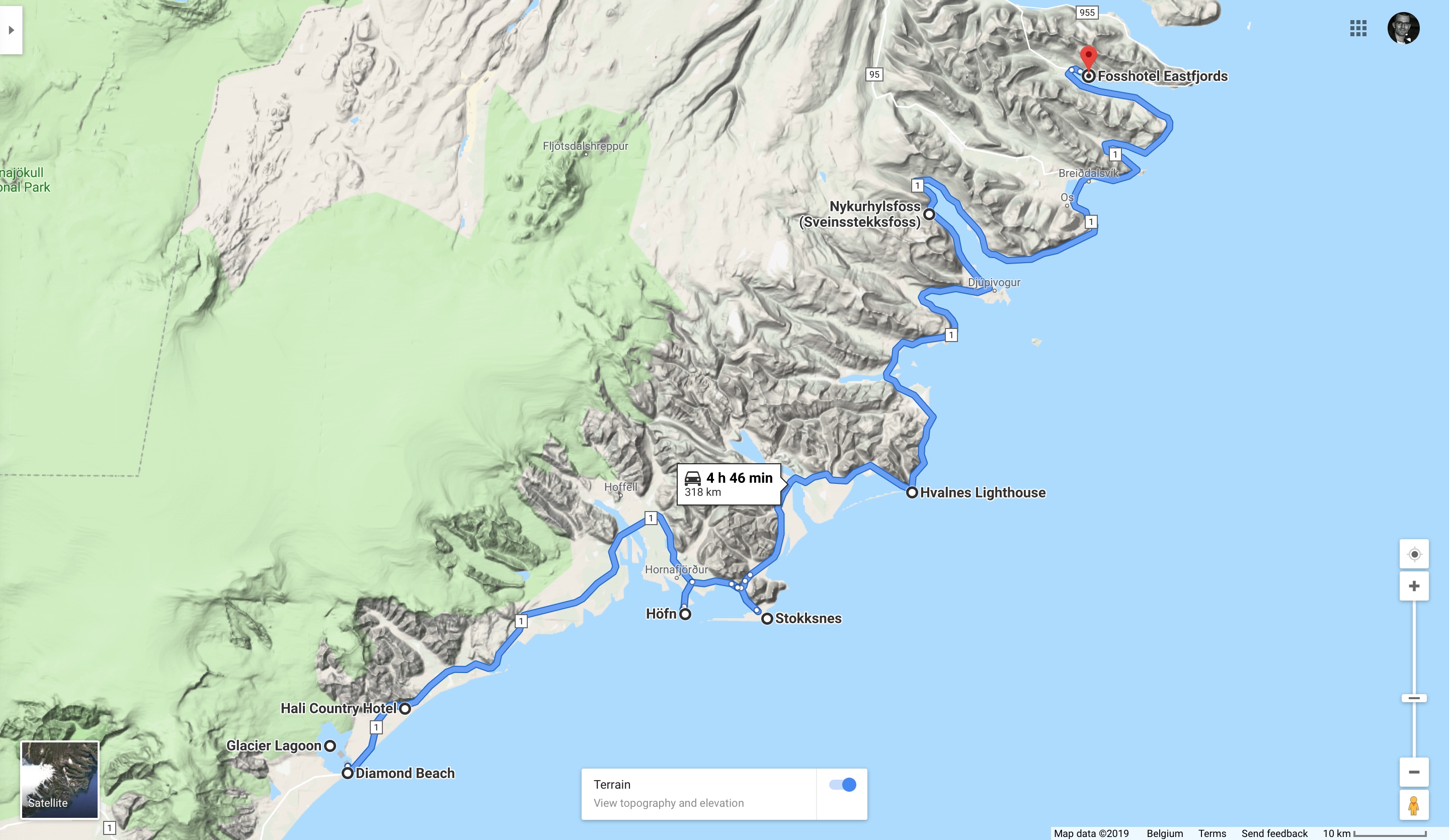 We started the day by driving back to the Glacier Lagoon and the Diamond Beach, to experience these places under different light conditions too. Due to the very early sunrise, by the time we set foot on the beach the lights were not really warm morning lights anymore, but it was still worth walking around one more time. I spent some time trying to get some original pictures, but it is very difficult on a location like this, especially after spending hours watching YouTube videos about photography on Iceland… 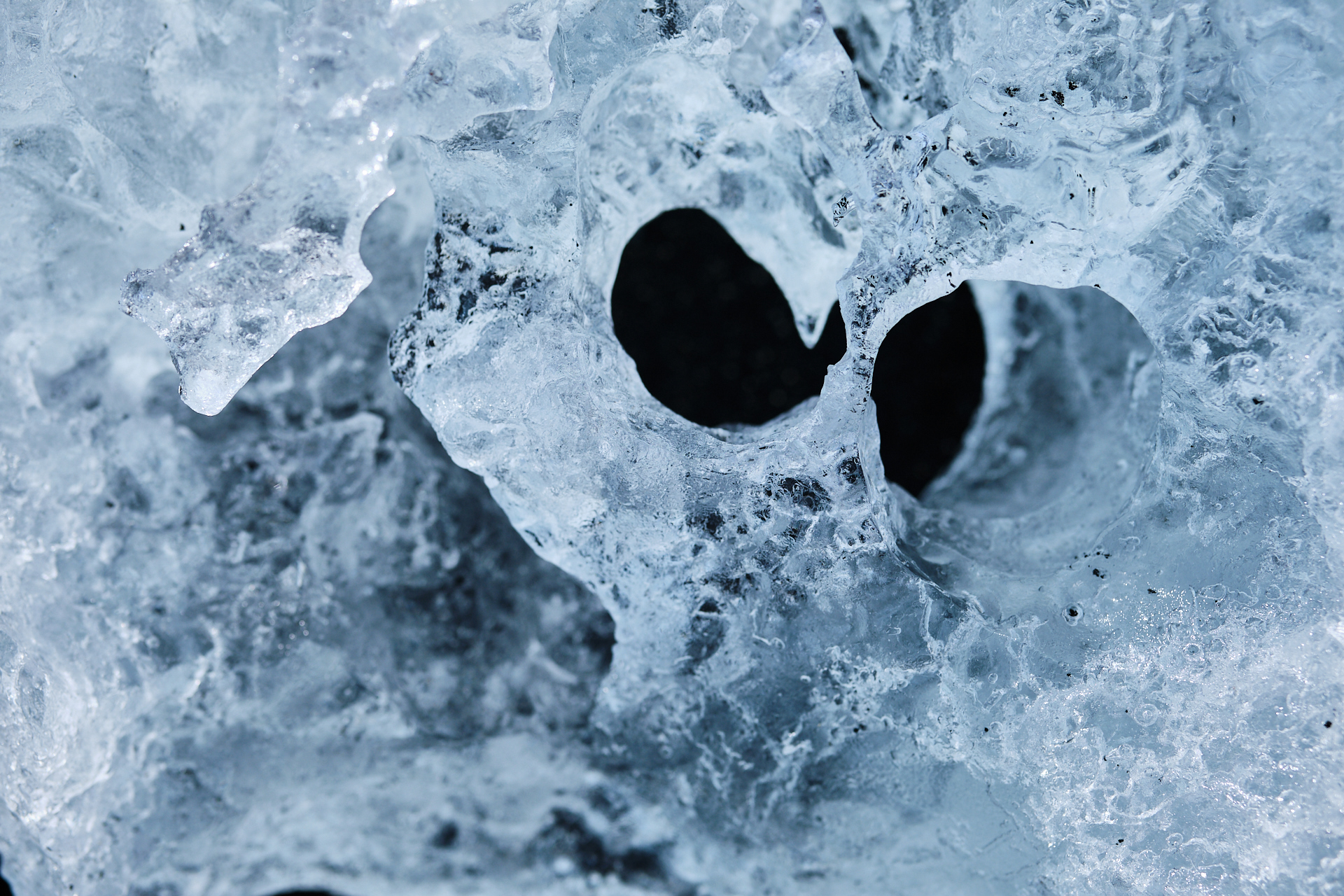 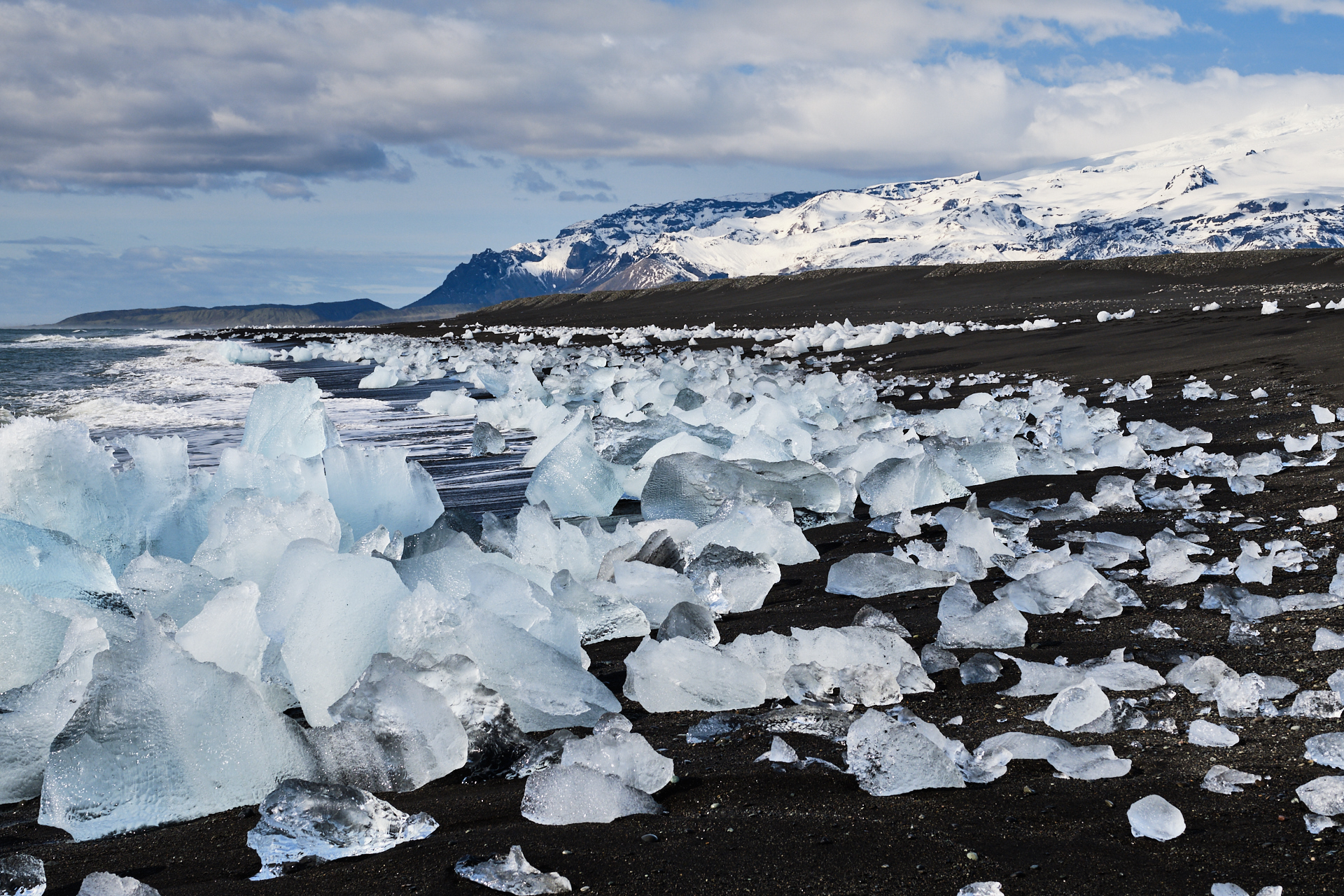 Thanks to Clio’s eagle eyes, we even spotted two smaller whales (besides the much easier, nearby seals), slowly swimming by the coast around a hundred meters off shore, coming up to the surface from time to time for a sip of fresh air. We finished our visit here by driving five hundred metres further back on the main road to stop at a parking spot along the Southern shores of the lagoon, where after a few minutes of walking we could get a nice panorama over the whole area from a bit higher than at other places. (We still spent almost 1.5 hours here in total.) 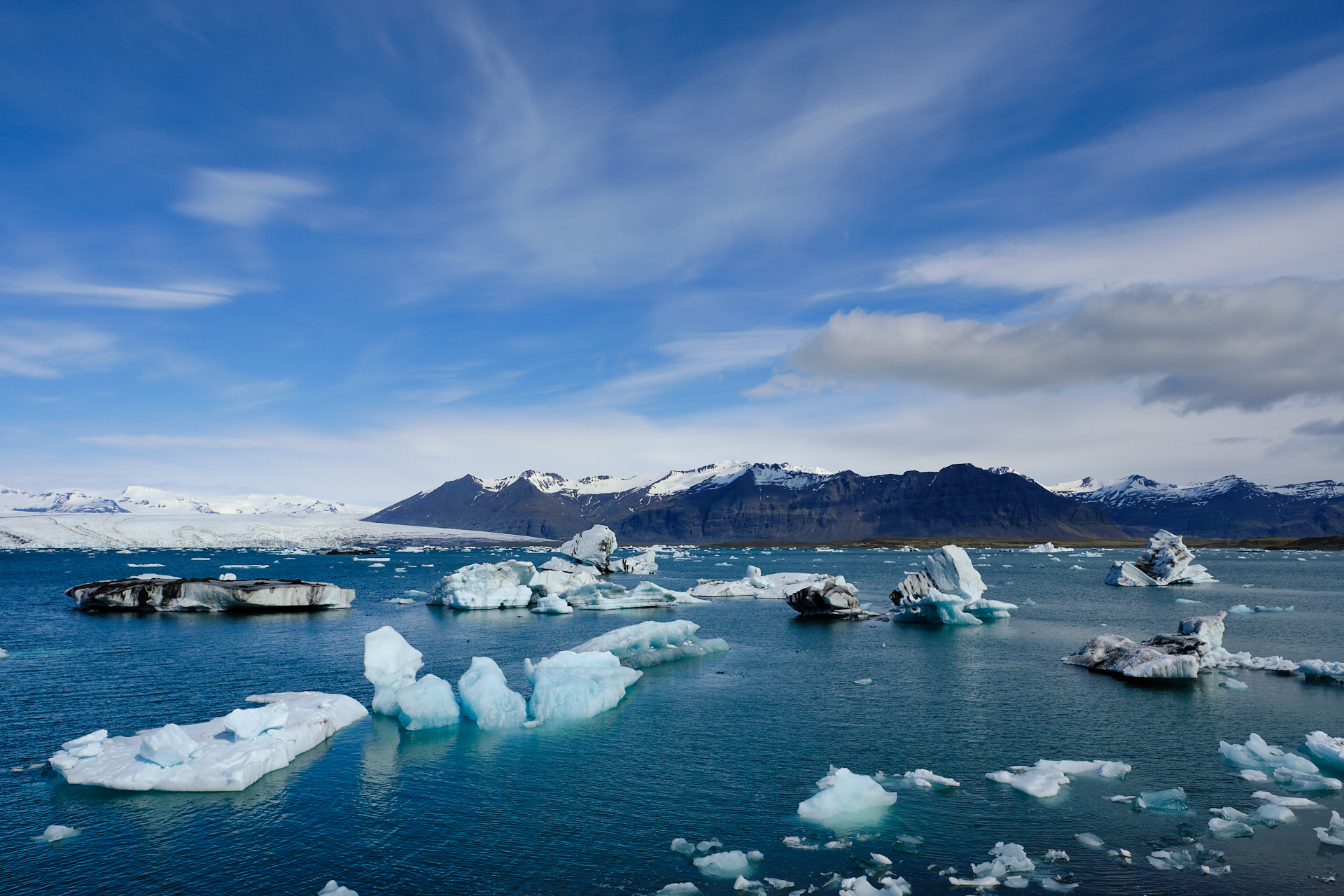 From here we continued our journey towards the East. The ring road cuts through grass covered flatlands (still shades of brown and yellow at this time of the year), but there are constant views to the never ending series of glaciers and mountain ridges to the left. At one point we have to cross the complex branch-structures of a meltwater river, over a long single lane bridge (looking quite worn). These outwash plains are quite frequently seen here to the South, we also had to cross several others the day before. After the bridge the road turned South towards Höfn, where we were planning on getting something for lunch. Unluckily just when we arrived to the harbour and stepped into the diner of Hafnarbuðin, a large group of school children flooded the place and started ordering food before we could do so… I was way too hungry to wait and also did not really want to listen to loud children the whole time, so we decided to just go and grab something at the N1 petrol station. Over there is was quiet and – as usual – they had a really nice hot dog for me and some fish and chips for Clio.

Our next stop for the day was the Stokksnes, only a short drive further along the ring road. It is a small headland stretching Southeast from the feet of the scenic Vestrahorn mountains, wedged between black sand beaches, and covered with small grass-topped sand dunes. You have to pay to enter the area – probably due to it becoming one of the most well known photo-spots of the island -, but it is definitely a nice place to walk around a bit. Unluckily the wether turned a bit grey after the sunny morning hours, but I still enjoyed playing around with my photo equipment, trying to find a scenic spot between the larger than expected wind-blown dunes. 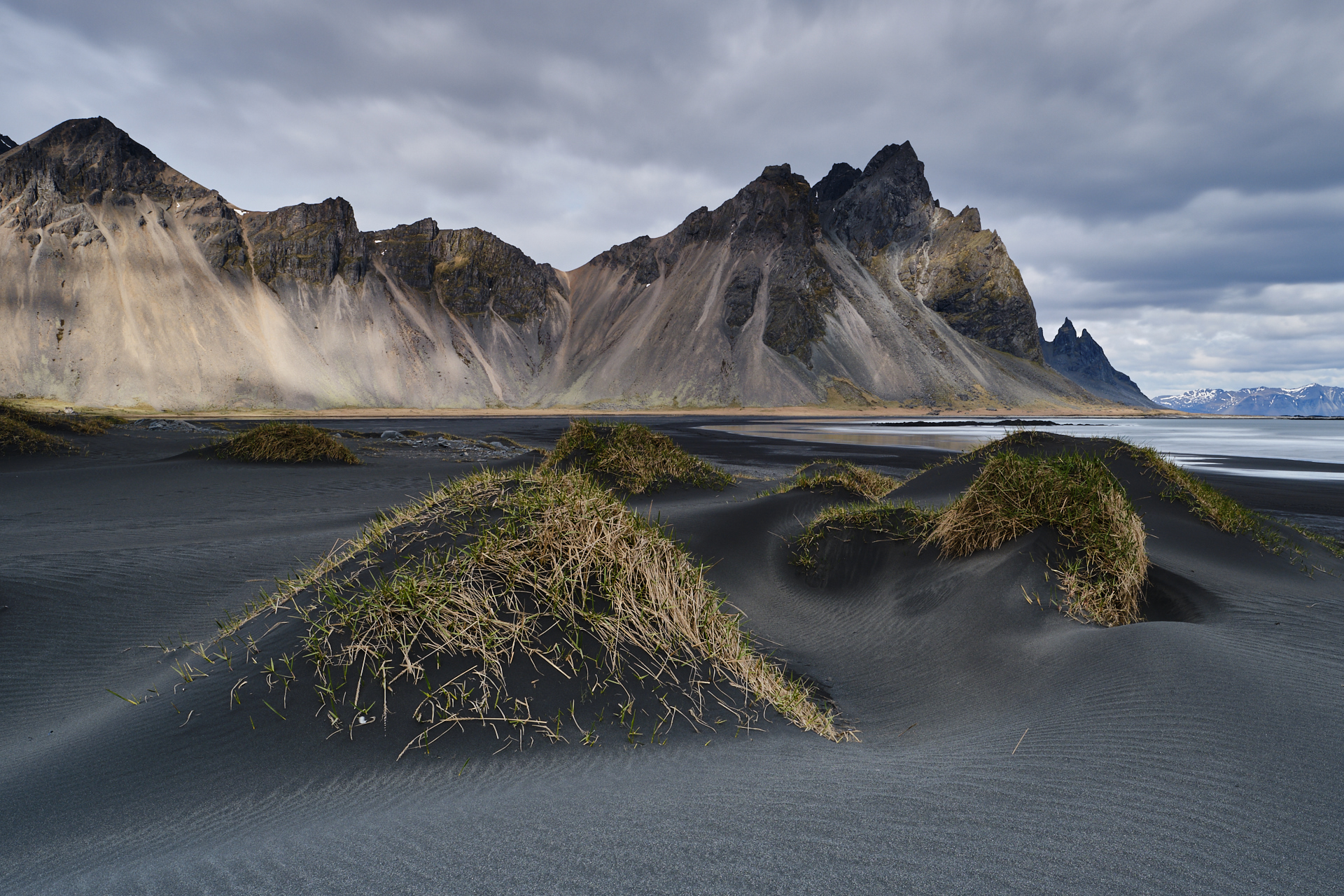 Another hour (and another single-lane river-bed passage) later we had a short stop at the Hvalnes Lighthouse, but it was so cold and windy here, that it was really just a hop out of the car. At this point the road turns more towards the North-Northeast, and the glaciers and glacial outflows are replaced by deeper and deeper fjords of the Eastfjords. Reaching the almost 20 km long Berufjörður the mountains start to display those typical, nearly horizontal rock layers that are mostly known from images of the Faroe Islands. There is still quite some snow on the top of the ridges, which helps pronouncing these formations even better. After almost running over a few reindeers who though that chilling out in the middle of the road just after a sharp curve was the best idea we made a small detour to the Nykurhylsfoss, but after all the amazing waterfalls of the previous days we did not find this one particularly impressive. I personally found the view itself from the tiny parking spot to the mountains over the other side of the fjord much nicer, especially since the sun came out again for a few minutes. 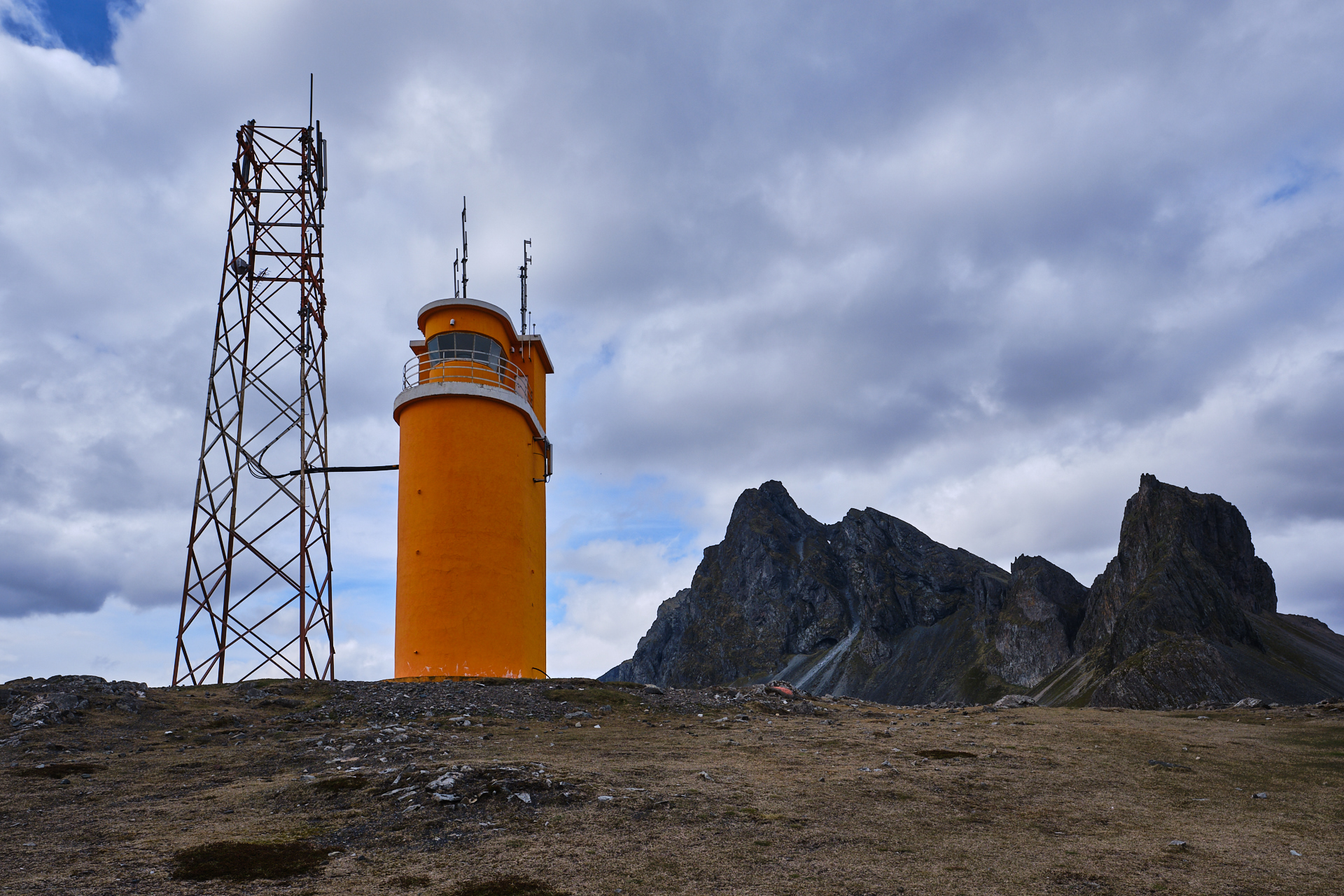 The views along the road were really beautiful (if you like barren mountains like I do), but we only stopped for food after here, because we were getting a bit behind our schedule. In any case the food itself deserves special mention. We had a burger in a tiny place just outside Breiðdalshreppur, the Hamar, Hótel – Kaffihús. We were the only ones there, and they served us the best burger we had in a very long time (and some good and desperately needed coffee). It was perfect, moist, had a well flavoured sauce, and the fries and onion rings were also delicious. I really do not write reviews often, but here I really wanted to (and did). 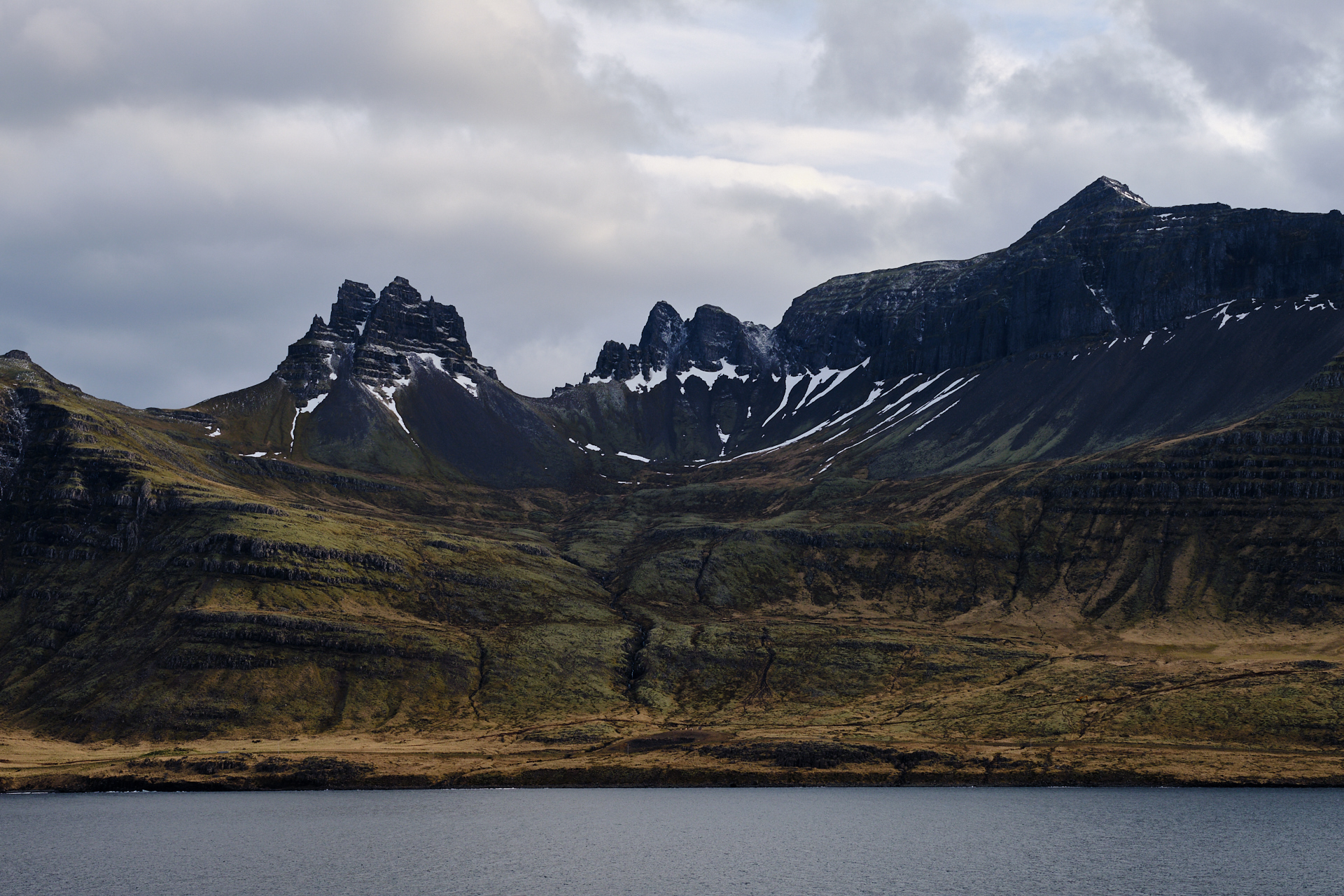 Our hotel was only one and a half fjords further, but we still had to deal with a bit of a scare on the way there thanks to the tire pressure warning light turning on, but we did not see or feel anything wrong with the tires, so at the end we just drove on. (Later on it turned out that driving on gravel, and/combined with stronger accelerations can also make these sensors think that something is not OK, but until we realised this it was quite annoying to think about. But having such simple sensors on a 4×4 is a bit stupid, isn’t it!?!) 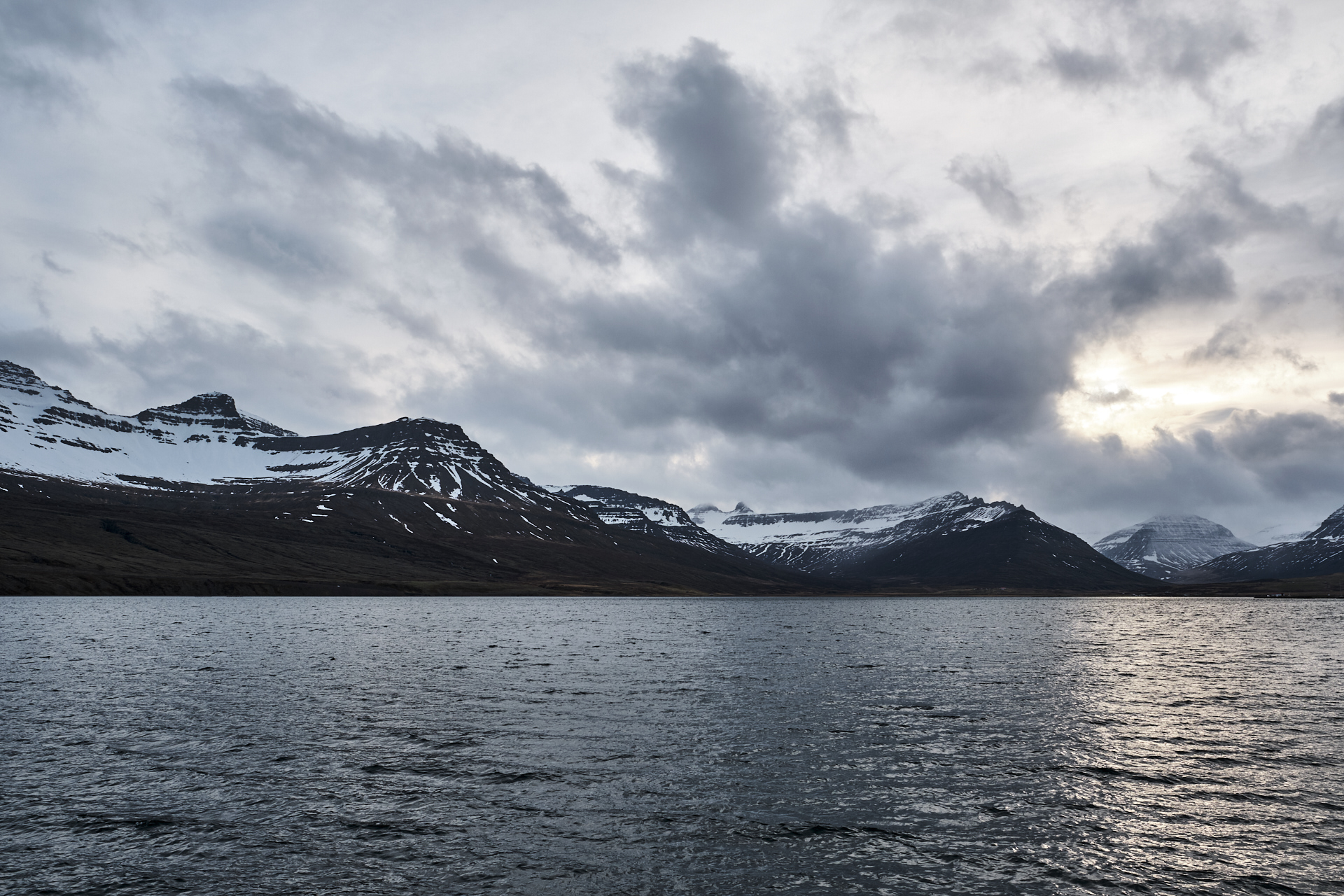 At the end it was almost half past seven when we arrived to the Fosshotel Eastfjords in Fáskrúðsfjörður, and just as we checked in (after still taking a few reference pictures of the tires just to be sure) a dense snow shower descended down the fjord from the Northwest. I still went outside to the wooden pier of the hotel take a few pictures, but my hands were getting frozen in the cold wind pretty quickly, so it was not a long expedition. Luckily I had not too many pictures to put online that day, and I could go to sleep in time (knowing that the next day would likely be very long with much many more sights to cover).