We had not set an alarm for the morning because of the predicted rain, so for once we got to sleep in properly. I actually don’t even remember getting breakfast, I think we just ate something from our snack bag. Clio probably visited the sauna once more, while I was surfing the internet, waiting for the weather to improve. Outside of Reykjavik this was the only place where we stayed for two nights, so we did not have to pack and check out that day (even though our packing game was already very strong). 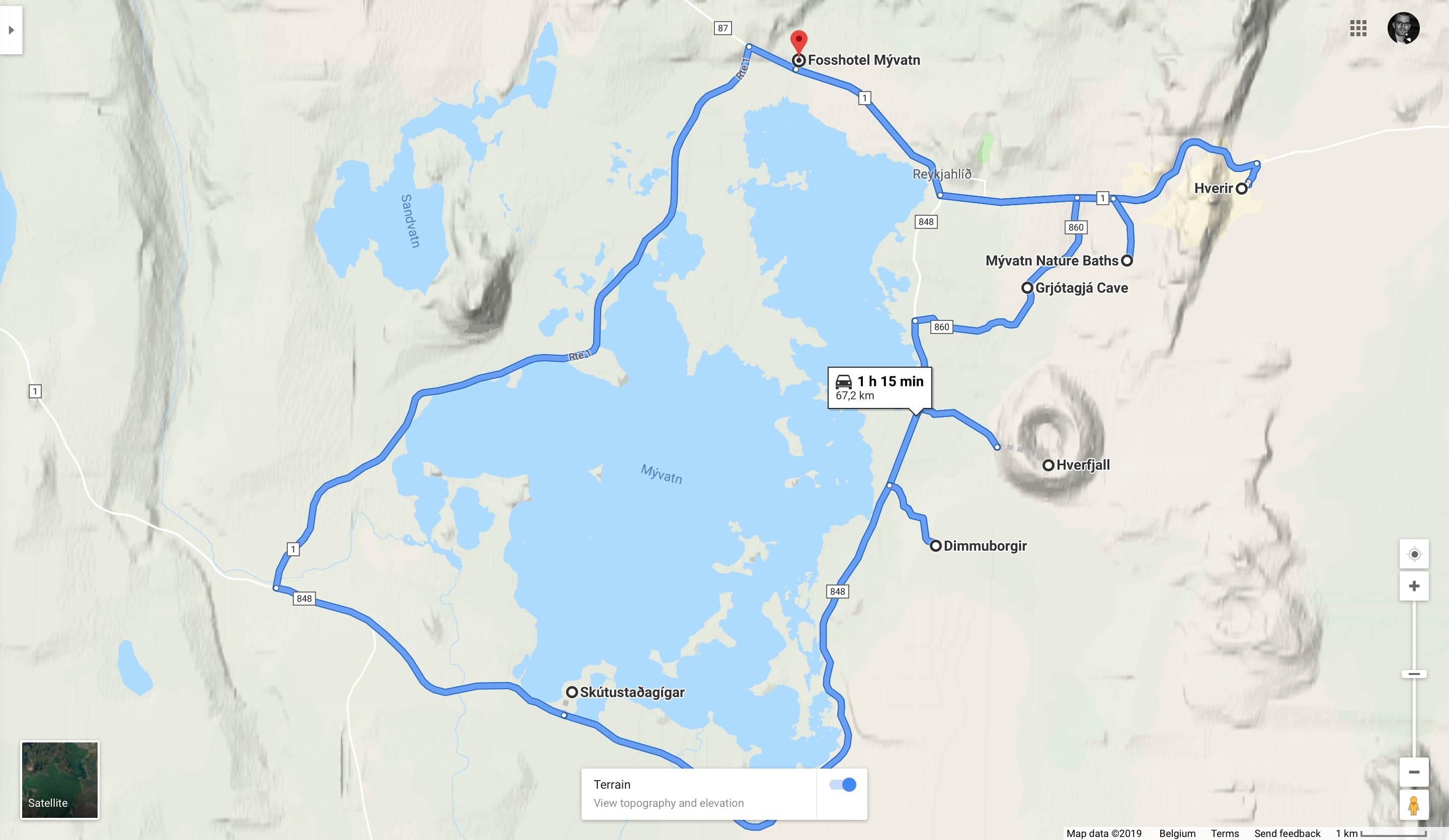 As soon as the weather radar gave us the green light (by indicating that the end of the rain zone was just about to arrive), we got into the car and drove to the Hverir geothermal area. Since we were spending the whole day around the lake, the driving distances were always very short (which was really nice after spending so much time behind the wheel basically each day since we left the capital). It seems that we were not the only weather-conscious people in the area, because two buses full of tourists also arrived as we got out of the car. It did not take two steps to realise that our shoes would not stay clean there, because the top two centimetres of the ground turned into mud from the melting snow and rain of the previous days. 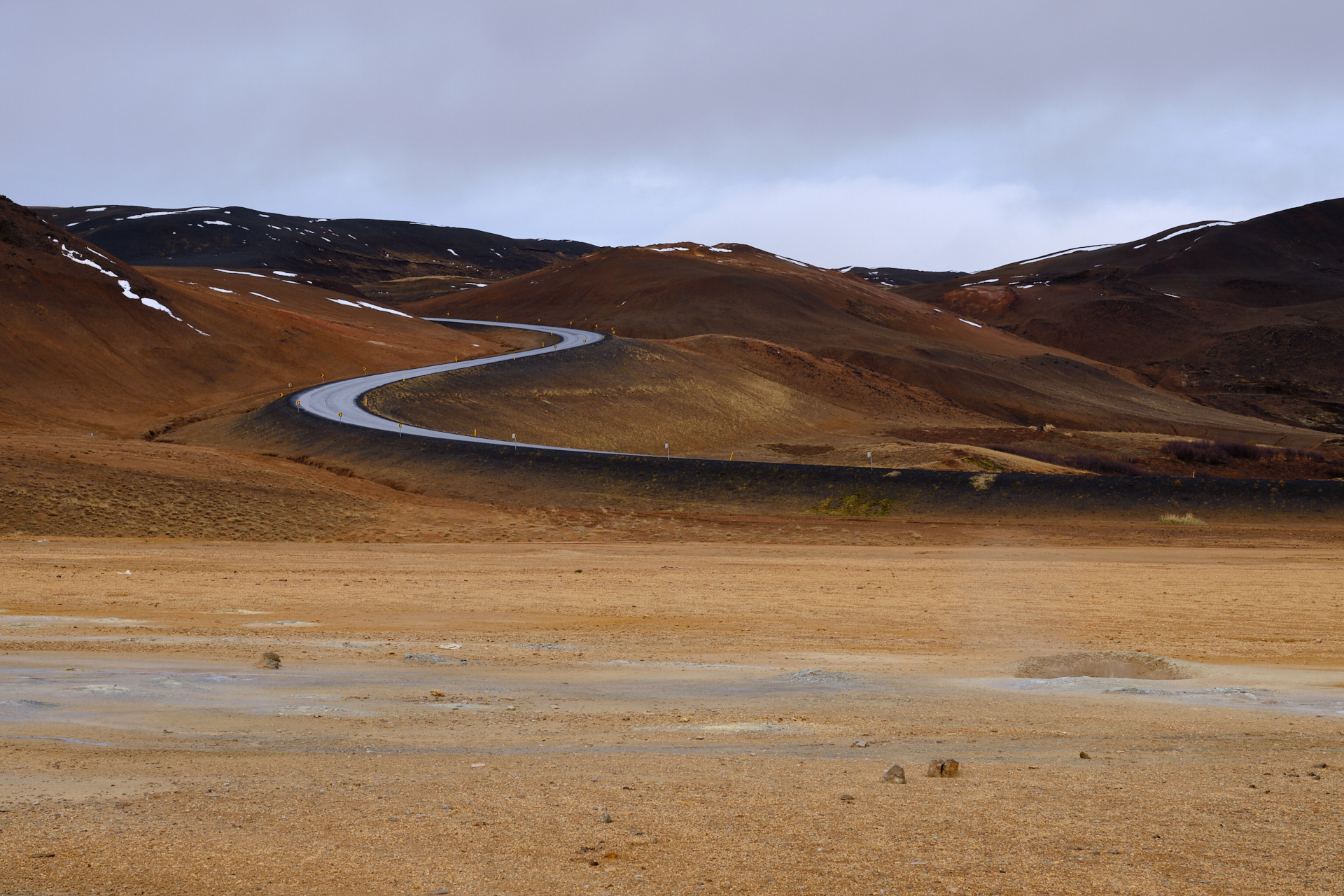 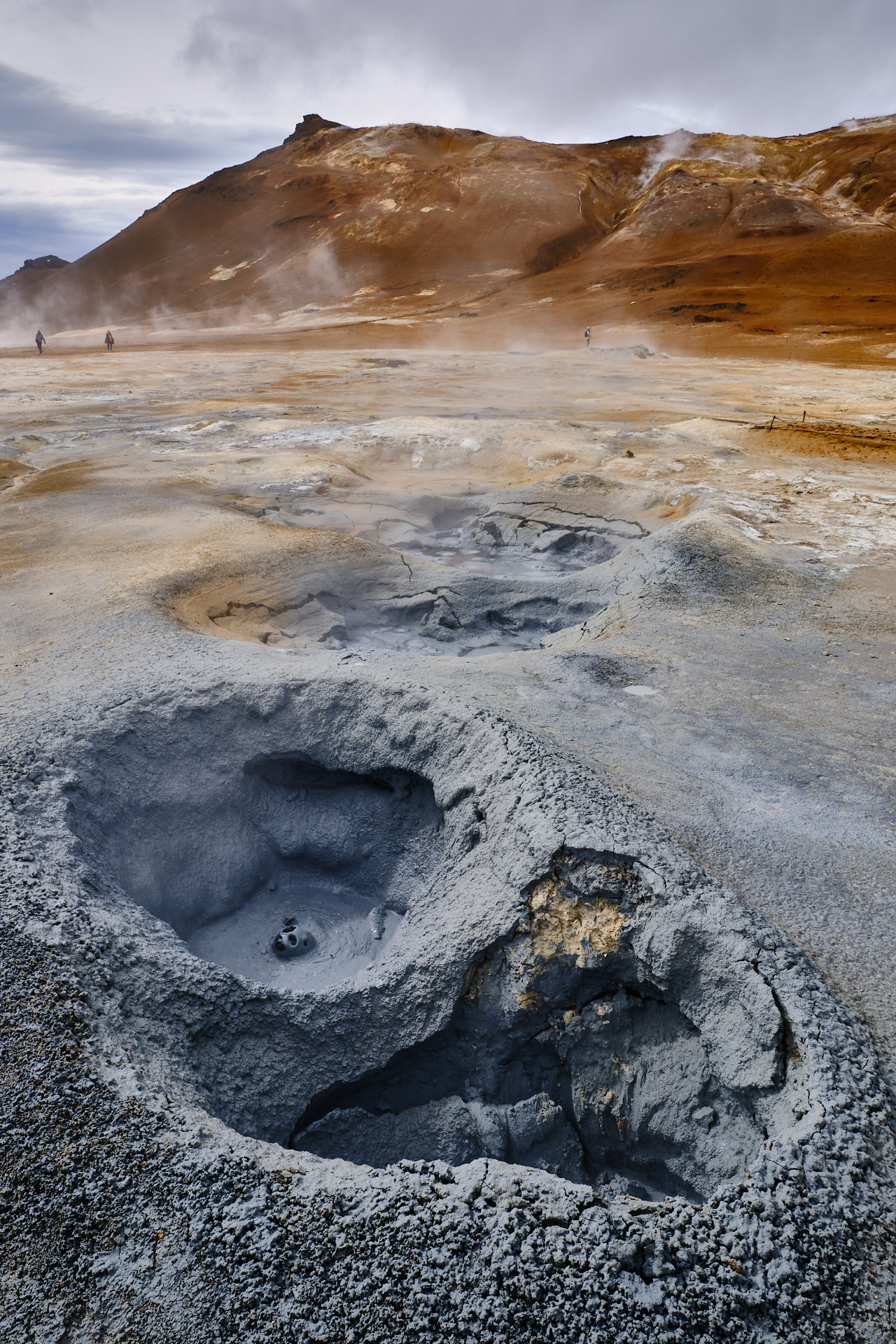 The geothermal area itself was really nice, with plenty of large boiling mud pools and a few tall, very active, steaming fumaroles emitting sulphuric gas – which made the experience also very smelly. I really liked the view of the ring road climbing past there on an S-shaped serpentine, engineered tightly around the topology of the colourful volcanic landscape. 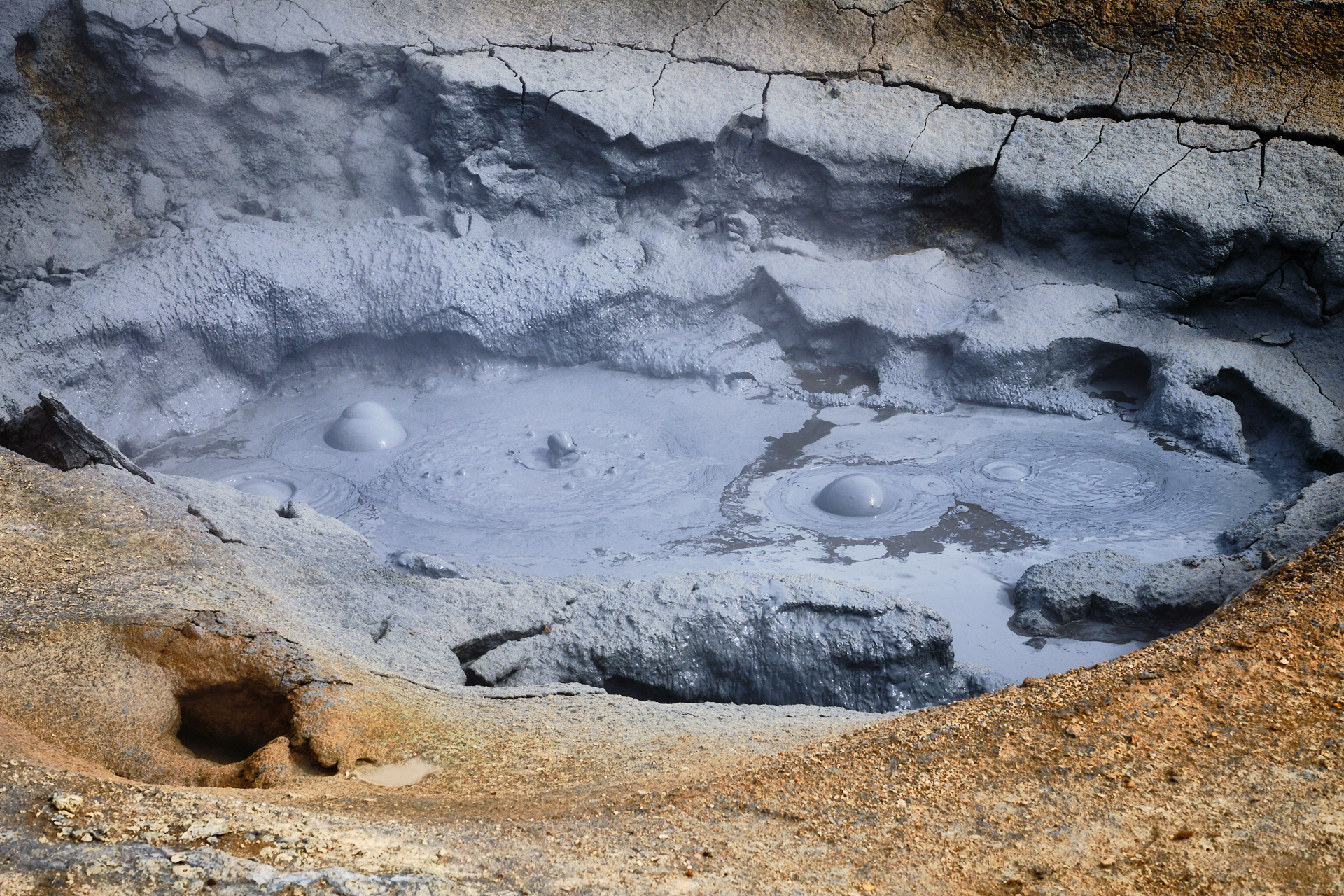 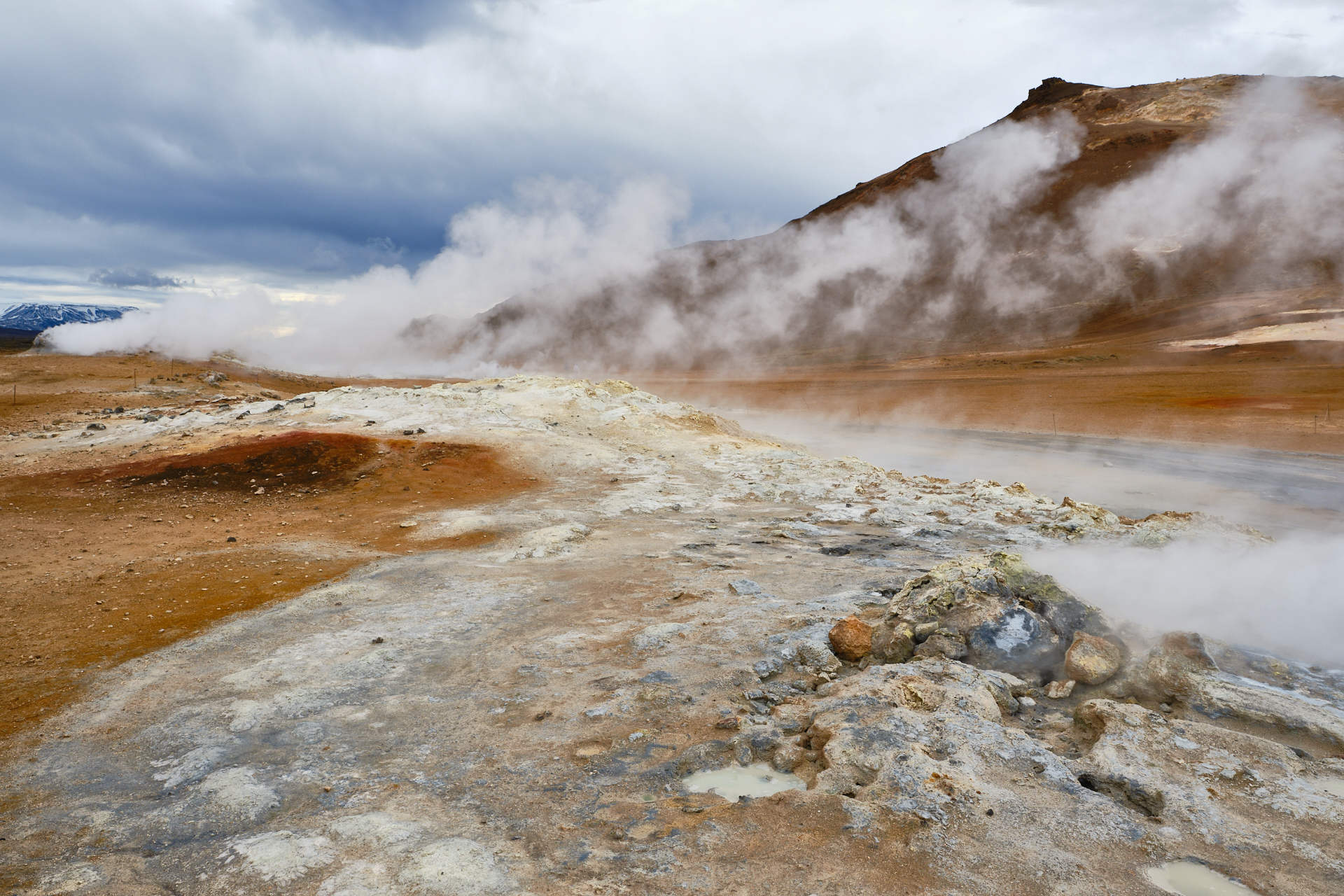 Our next stop was at the Grjótagjá Cave, which is a warm-water filled crack in one of the old lava flows, recently made famous by a fittingly steamy scene from Game of Thrones (and thus being mostly known simply as “the sex cave”). Actually it is worth climbing on top of the small ridge above, to see how the crack runs straight across the lava fields. 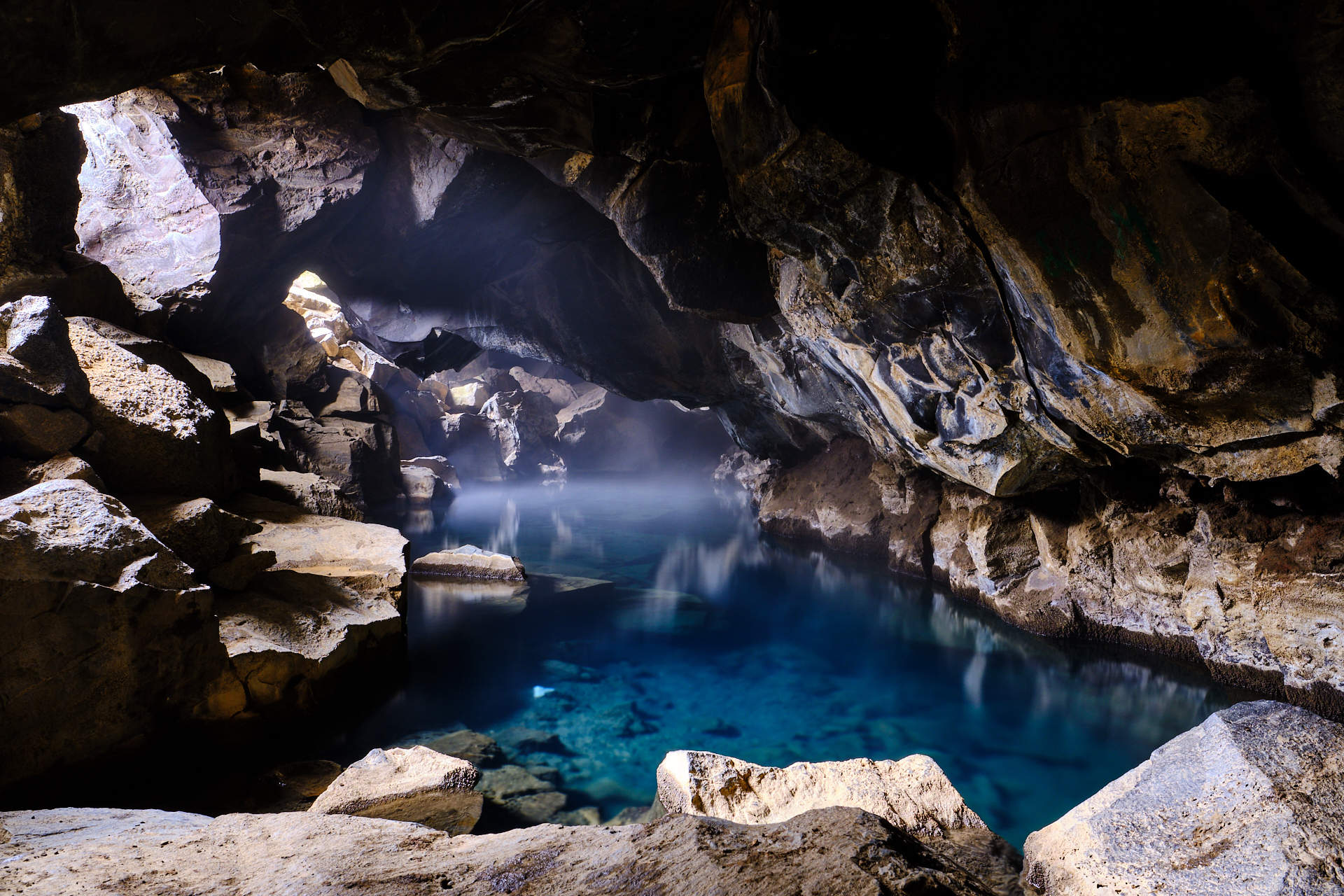 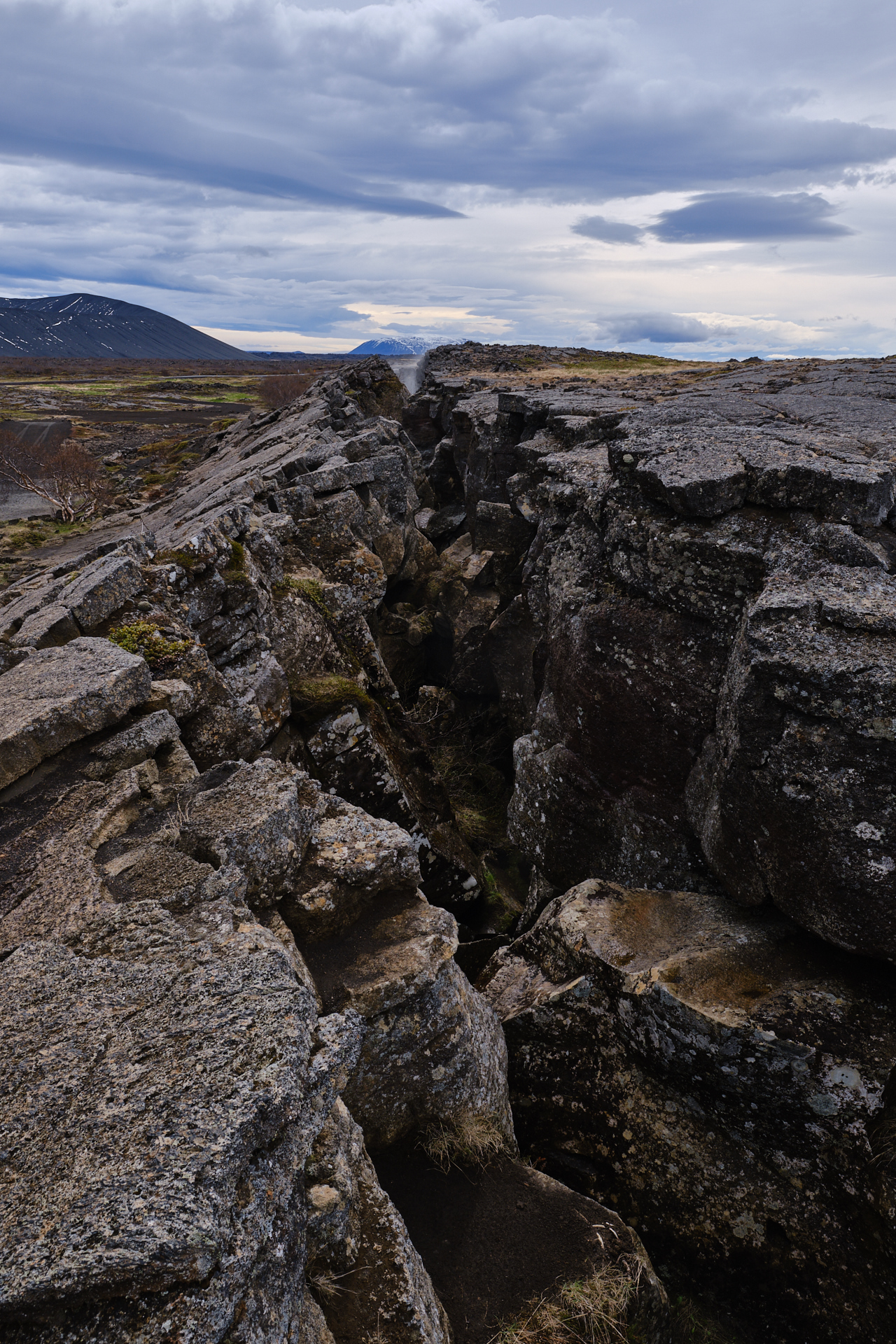 From here another small drive – this time down a narrow gravel road – took us to the ring shaped crater of Hverfjall. We hiked to the top (following a here and there loose, but generally easy, rocky path) along the Western flanks of the volcano, to enjoy the view into the caldera and over the whole region (lake, volcanoes, lava flows, steam columns, etc.). It was pretty windy and we wanted to stay on schedule, so after taking a few pictures we descending back to the car. The weather was finally getting a bit warmer – reaching around 10°C by the afternoon – after a few days around freezing, albeit the Sun was nowhere to be seen. 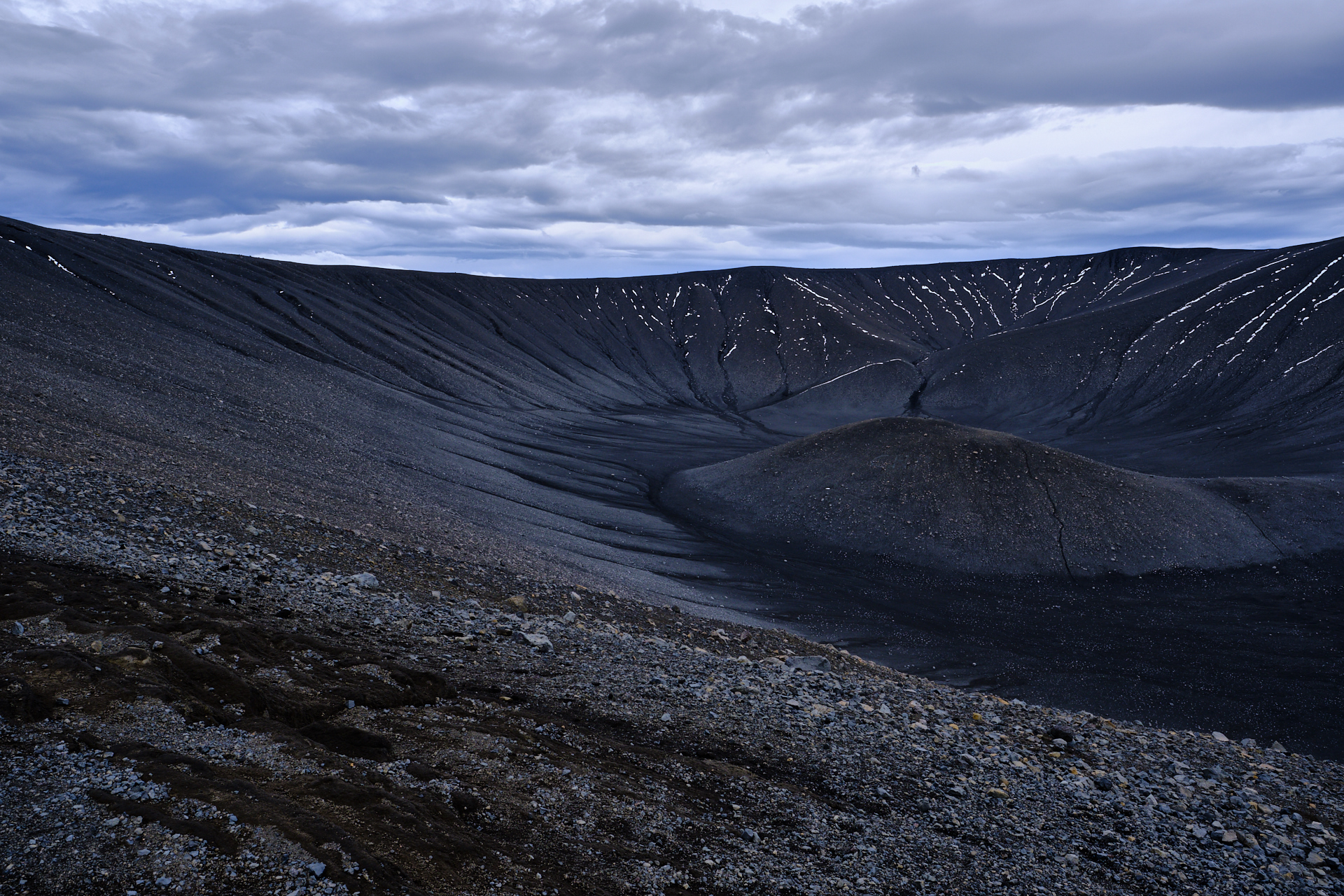 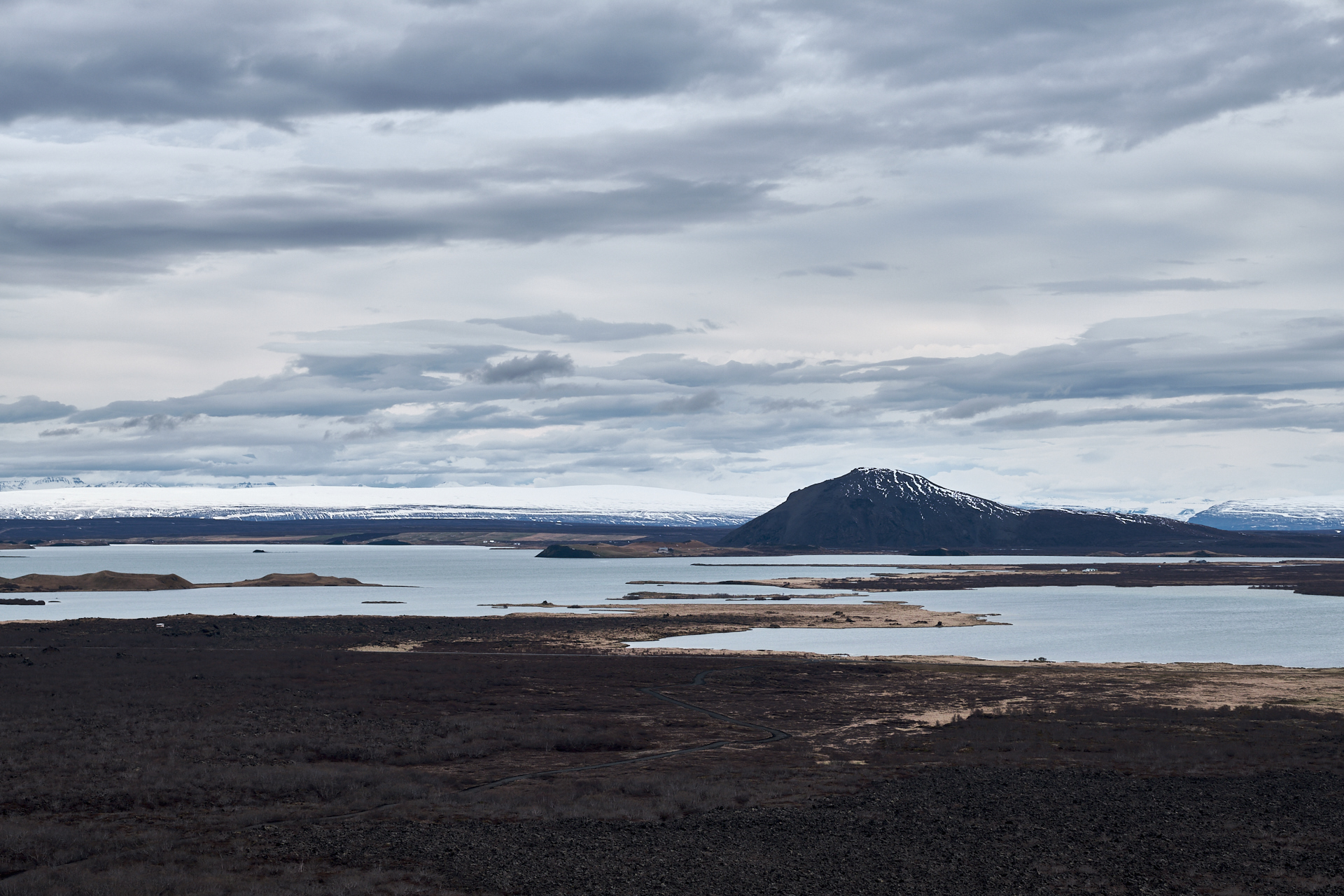 Just a ten-minute ride further we stepped out at the parking spot of the Dimmuborgir lava fields. Before going for a walk around the area, we held a short break at the Kaffi Borgir to get something to eat (a small sandwich, a slice of cake, and coffee). In retrospect, I should have definitely eaten more, but we will come back to this later. After the food we made a small loop around the lava towers of the area (worth reading the entry on Wikipedia about their formation), and while it was quite nice, I could not really capture the atmosphere on a photograph. 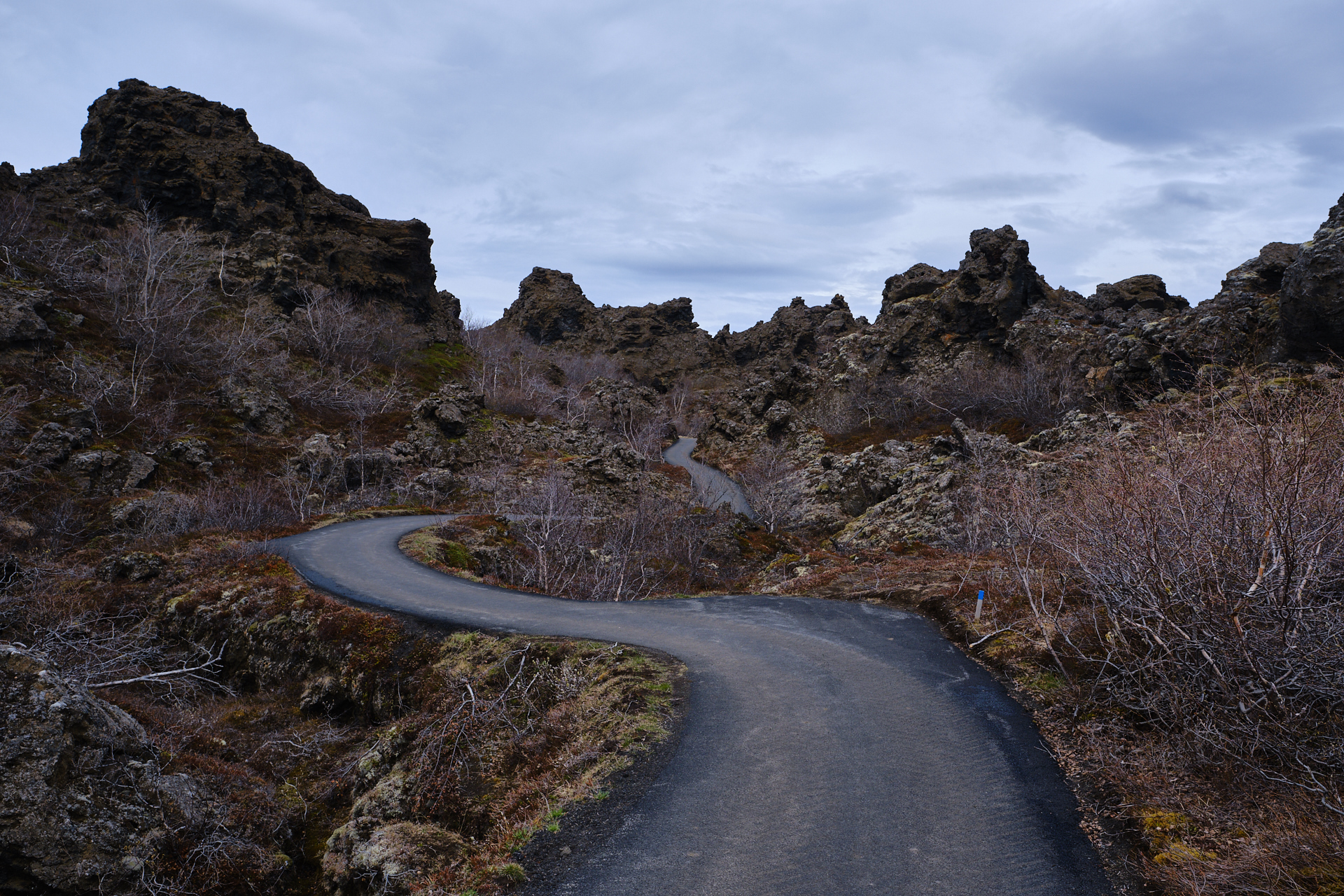 Originally we were planning to do another short walk around the coast of the small Höfði peninsula, but to save some time we skipped this, and simply stopped on the side of the road (in a parking spot further South) to take a few pictures along the way instead. 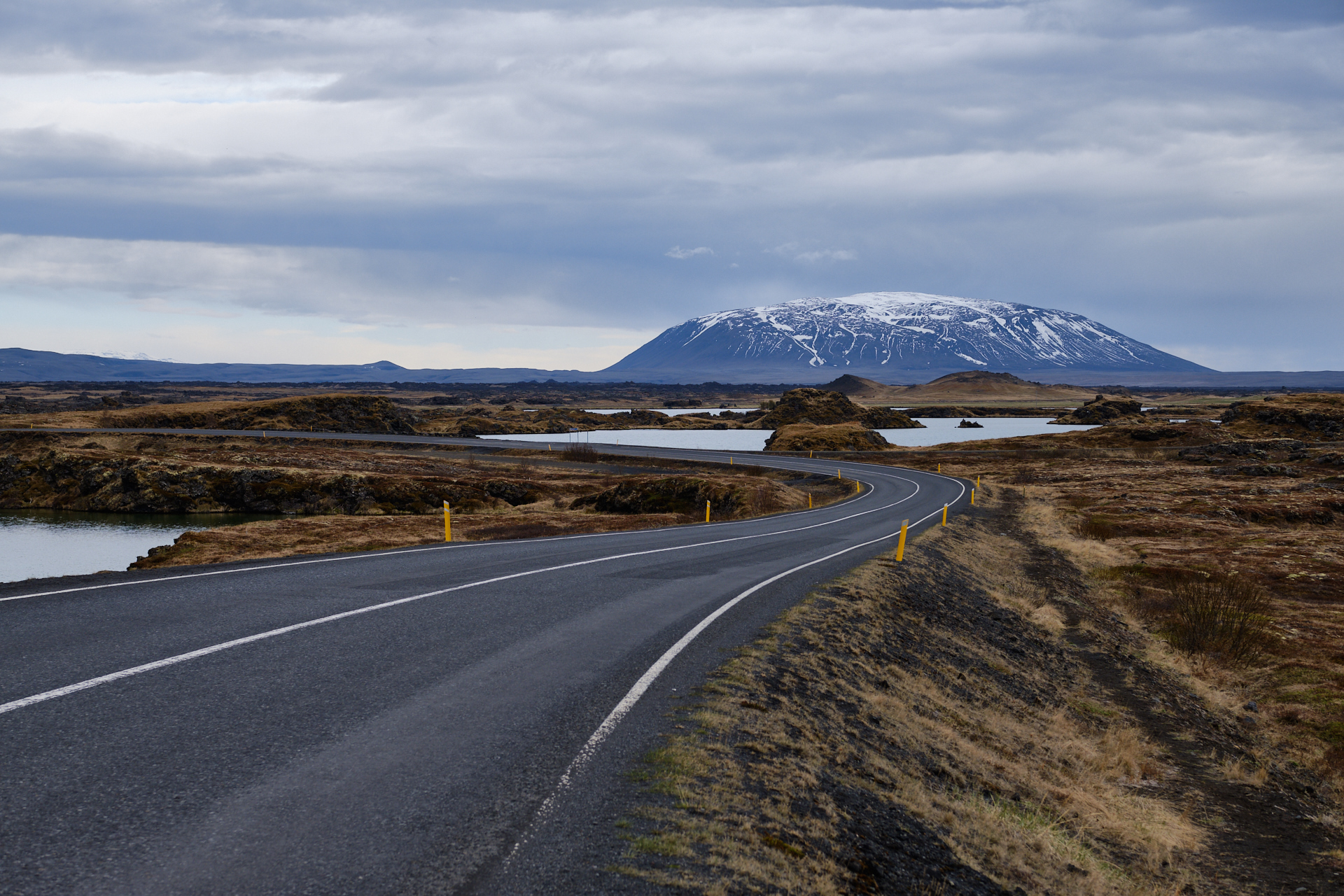 The last stop on our afternoon trip around the Mývatn was at the Skútustaðagígar, where we could walk around several grass-covered pseudo craters. Some of these craters had a nice view over the lake. From here we drove back to the hotel over the Western side of the lake, where there were still plenty of – less touristy – stops where one could stop to enjoy the scenery with more pseudo craters and views over the water. 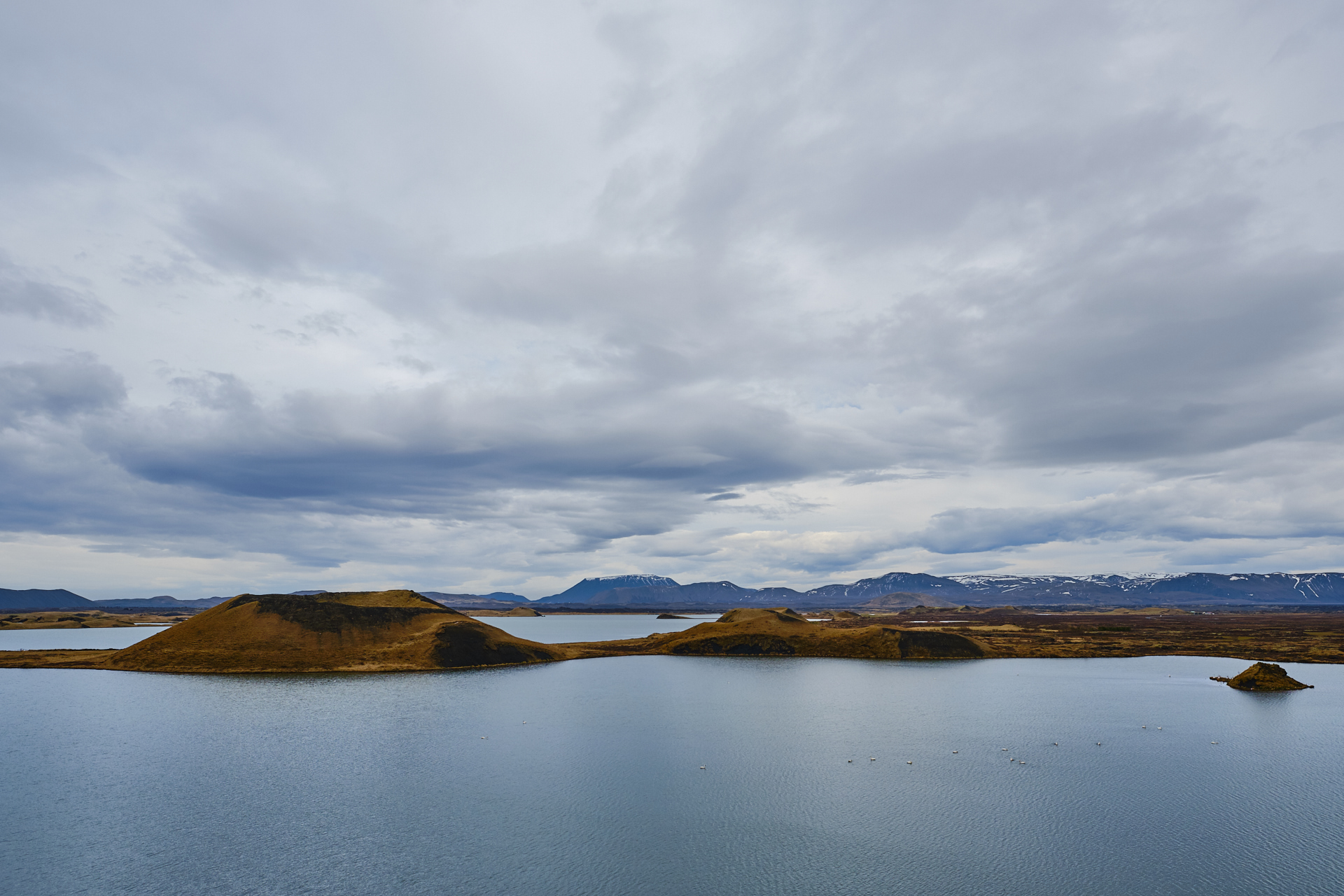 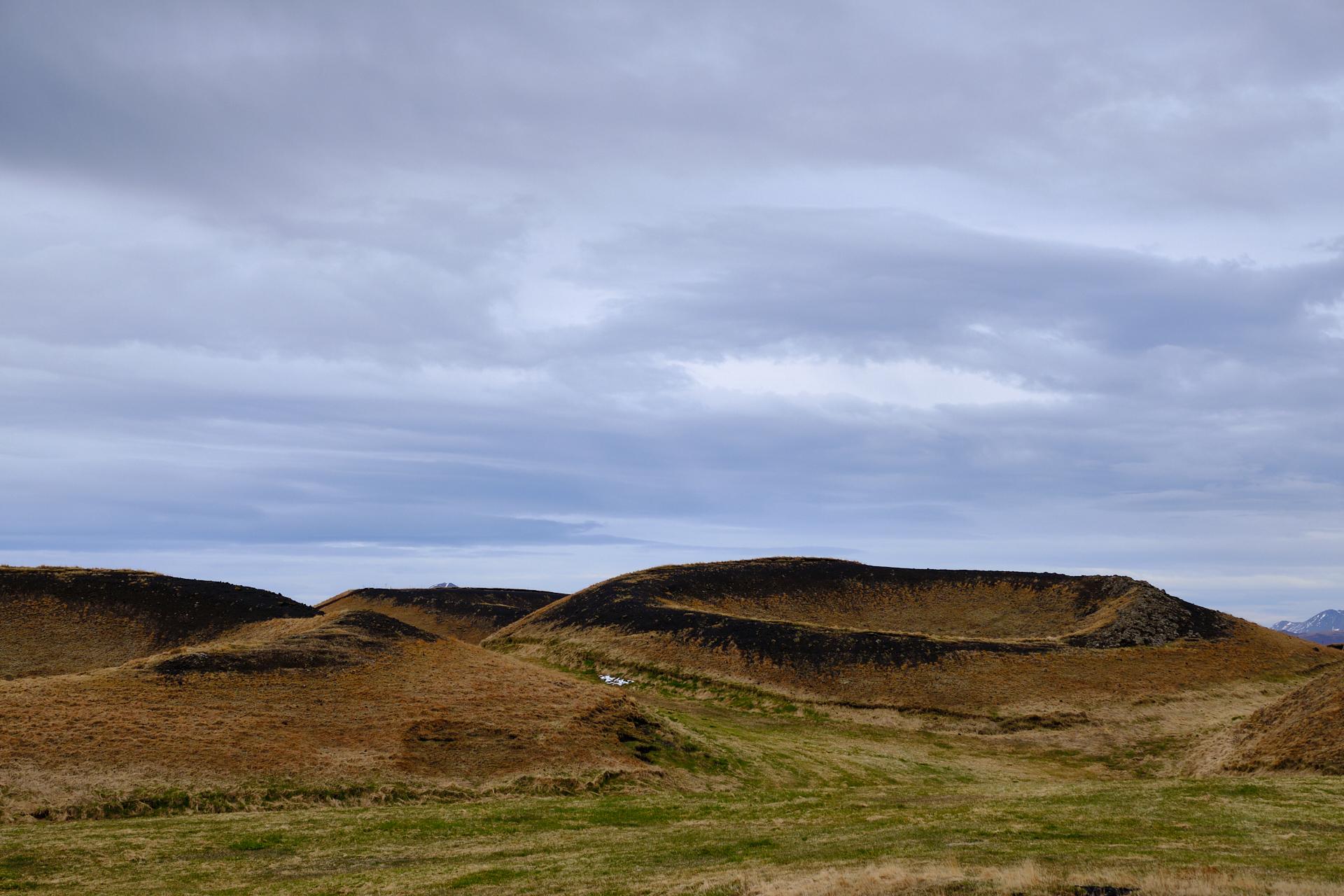 Back in the hotel we picked up our beach clothes and bath robes, left the photo equipment behind, and headed to the Mývatn Nature Baths. This place has basically the same kind of open air pools filled with light blue coloured geothermal water as the Blue Lagoon, but without the crazy amount of tourists, and with much friendlier prices. By the time we got into the water the sun came out, the air became very clear, and there were beautiful lenticular clouds forming over the mountain peaks. The water temperature was perfect, and for people like Clio who like to be cooked, there were even special hotter spots too. We spent a good one and a half hour relaxing and floating around from one spot to another, before getting out. That’s where things went downhill for me very quickly. As soon as I got out of the water I started to feel weak, and while walking to the changing room I quickly realised that my blood sugar level was plummeting and that I had to get horizontal ASAP if I did not want to faint. So I lied down on a bench hoping that things would get better, and of course that helped temporarily. Unfortunately instead of asking for help from someone I did the “manly thing”, and got up slowly to walk back out to one of the first aid people on my own. I guess you already know where this is going. I fainted twice, one the way towards the door and on the way back to the bench (after I realised that I won’t make it outside), the second time hitting my head against the stone wall, leading to a quite ugly scar on my forehead (imagine Harry Potter, but less lightning shaped and more bloody). So when I made it back to the bench I actually asked for help (there were not many people around, so people did not notice me spontaneously), and this way I was quickly taken cary by the staff. Meaning that I got some sugar pills, a wheel-chaired transport to the first aid room, some wound cleaning and so on (Clio did most of the patching up though). Luckily no stitches, and no concussion either. After filling out some paperwork, we had dinner in the cafeteria, before driving back to the hotel. I was quite annoyed by having to wear a band aid on my forehead, but I was still happy that things did not go down worse… So what is the moral of the story? Don’t go to the geothermal baths with and empty stomach! (And ask for help if you need it!)