We started the morning by walking from our cabin to the hotel for breakfast, sadly under grey skies, in strong contrast with the sunshine from the day before. After food we jumped into the car and drove through another extremely narrow tunnel to the next fishing village, Siglufjörður. (Actually my original plan was doing a shorter hike in one of the nice valleys, up to a small lake from the Skeið lodge, but as the weather was not really nice, and we were also quite tired, we decided to skip that.) 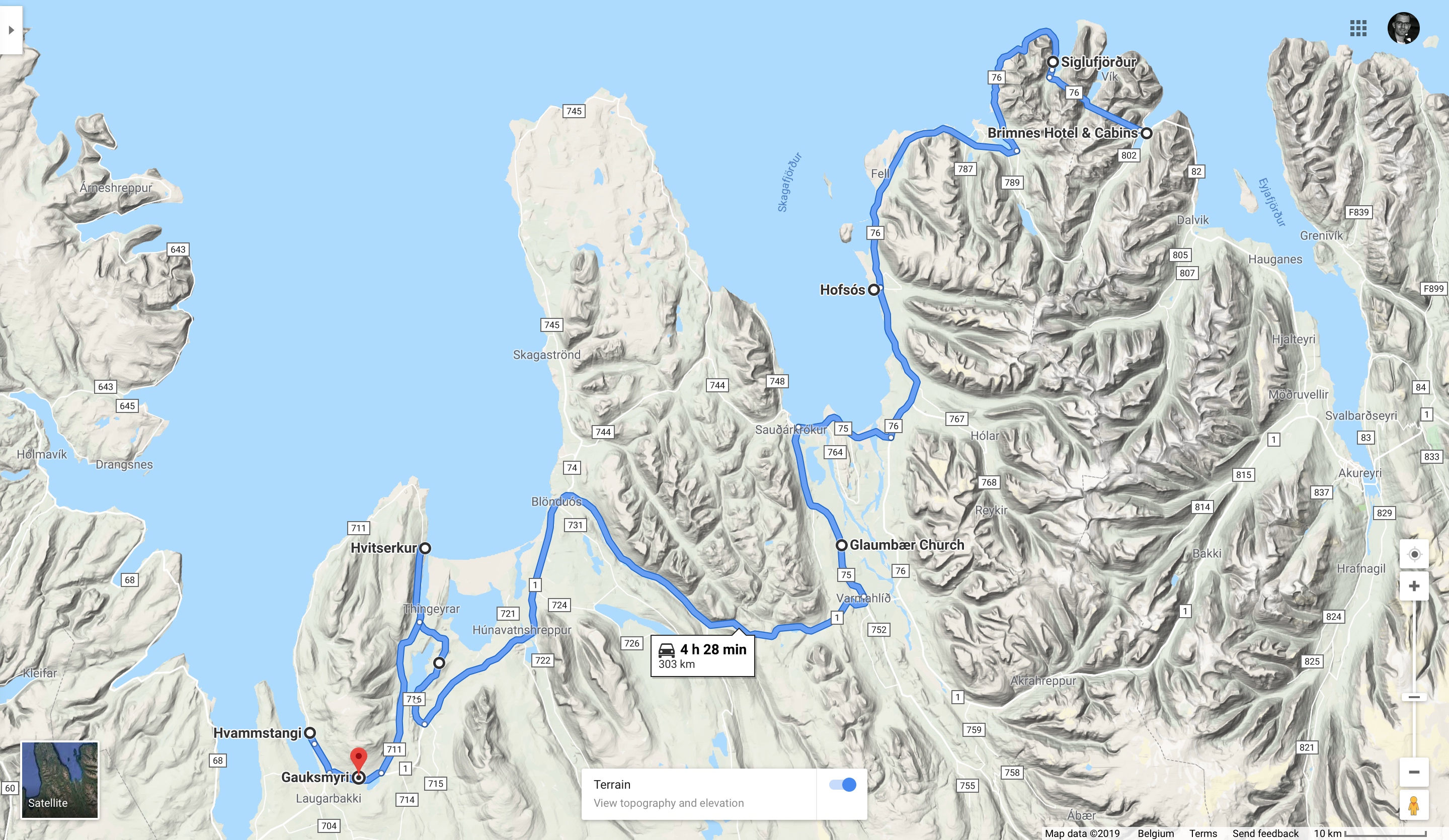 I spent quite some time trying to capture the atmosphere of the harbour and the colourful houses along the water, but it was quite a challenge given the difficult light conditions. Maybe the lady who was painting the landscape – sitting on one of the rocks along the shore – found capturing the moment easier. 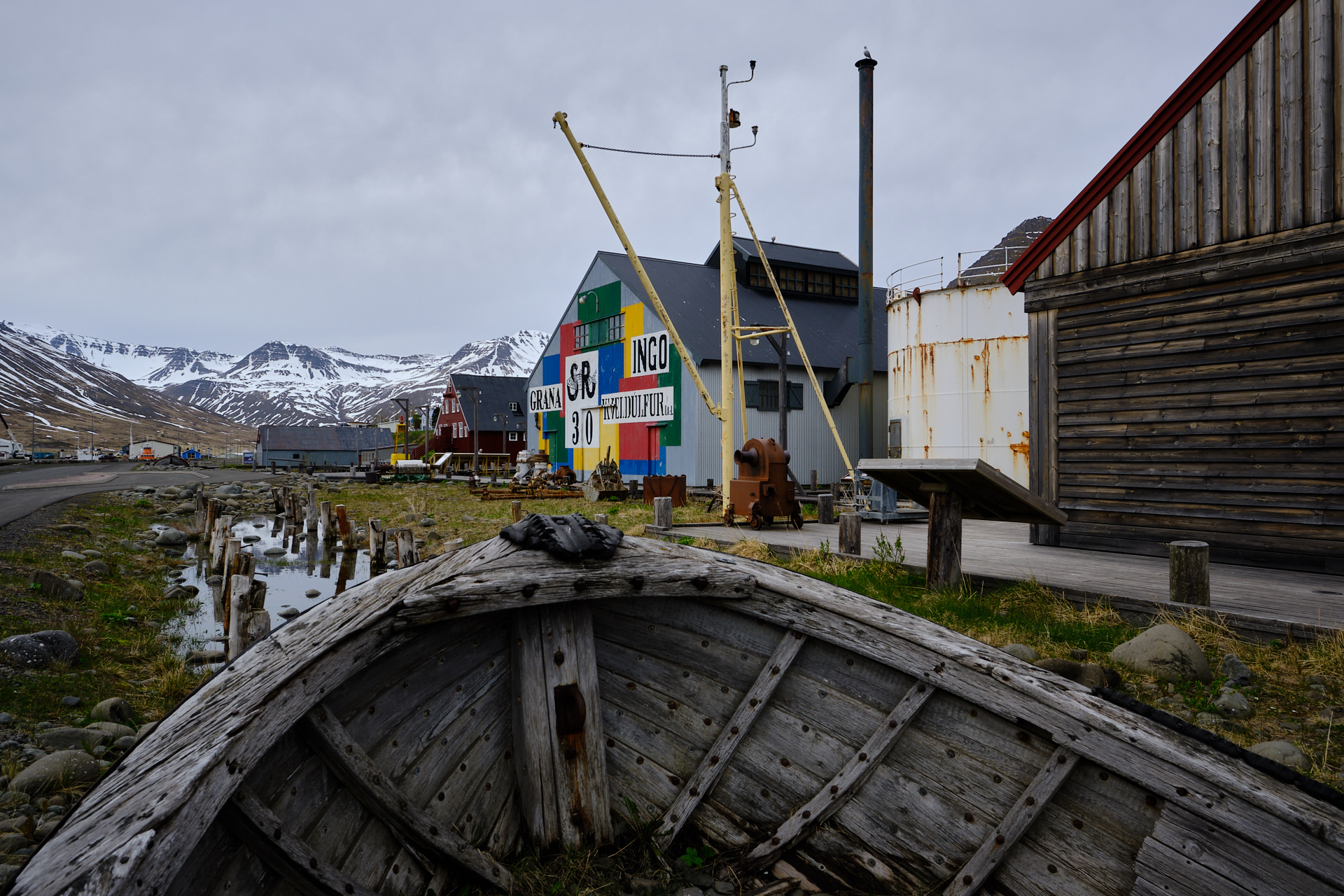 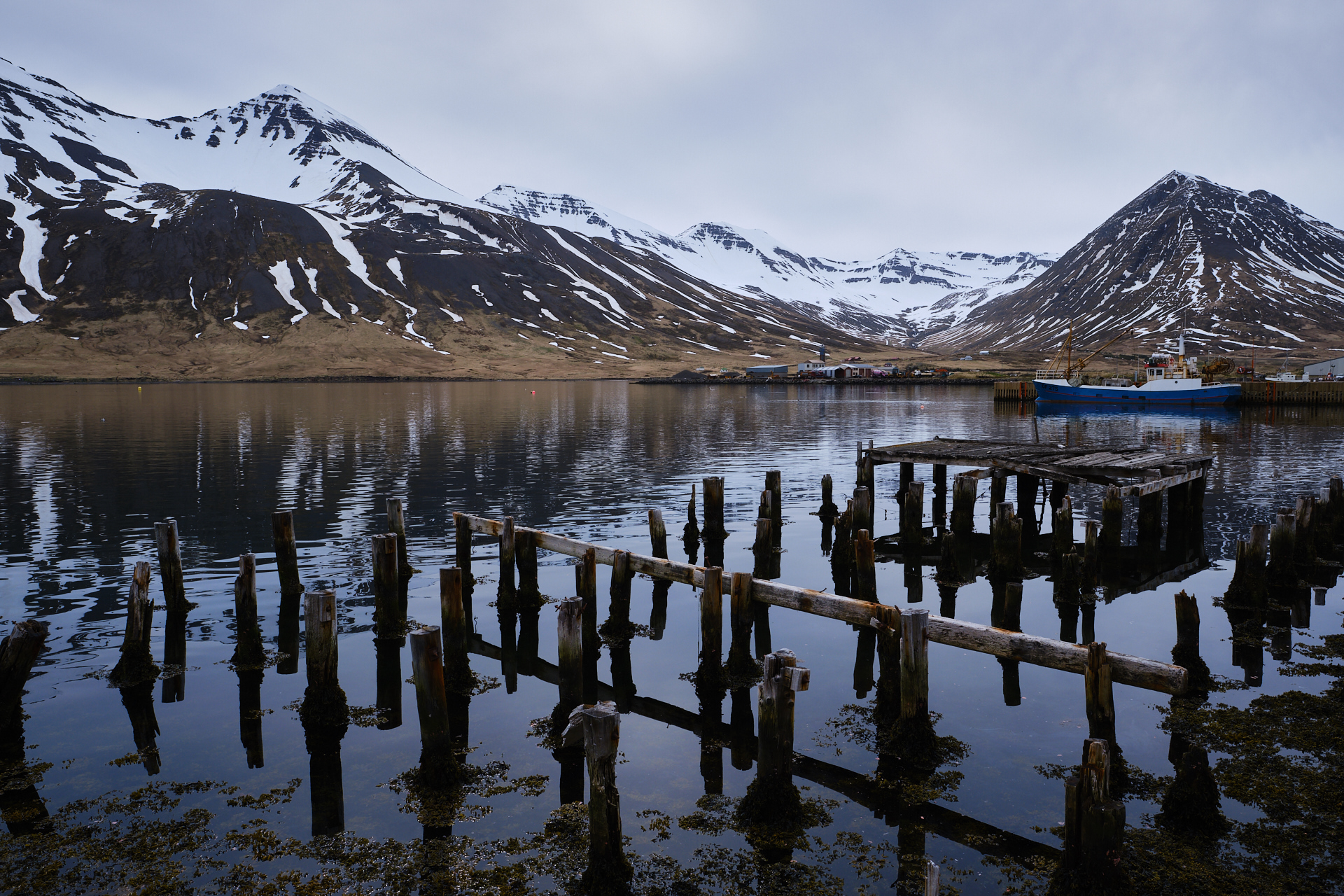 A half hour later we drove further, following road 76 along – and mostly high above – the coastline. The flow of the winding asphalt ribbon was occasionally broken by a few hundred metres of gravel, keeping us (or at least me) well awake, and making the drive quite demanding on the senses. After an hour we arrived to the village of Hofsós. There are two things here that are worth checking out: the open air swimming pool overlooking the fjord, and the basalt columns along the beach just under it. Since this is definitely one of the lesser known parts of Iceland, there were no crowds here like at the beach of Vik. We had plenty of time, so I set up my tripod and used my filter system to make some long exposure photographs too. 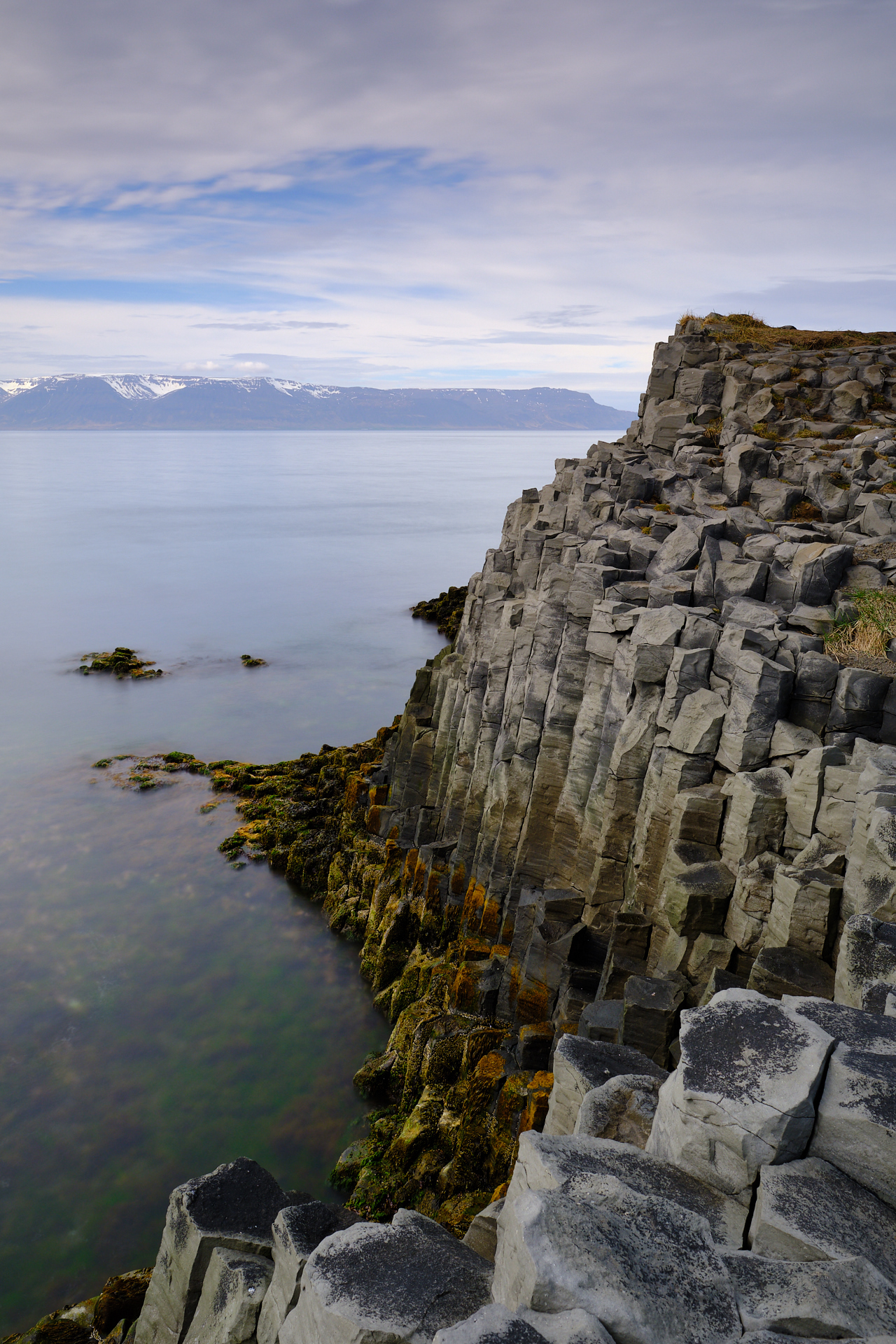 We drove further around half past noon (having spent almost an hour at the basalt columns), and soon entered the realm of sheep, as we left the rugged mountains behind, and the landscape opened up as the valleys got wider and flatter. There were farms with fluffy sheep everywhere, and it was definitely the right time of the year for seeing plenty of lamb amongst them. (So, damn, cute!) 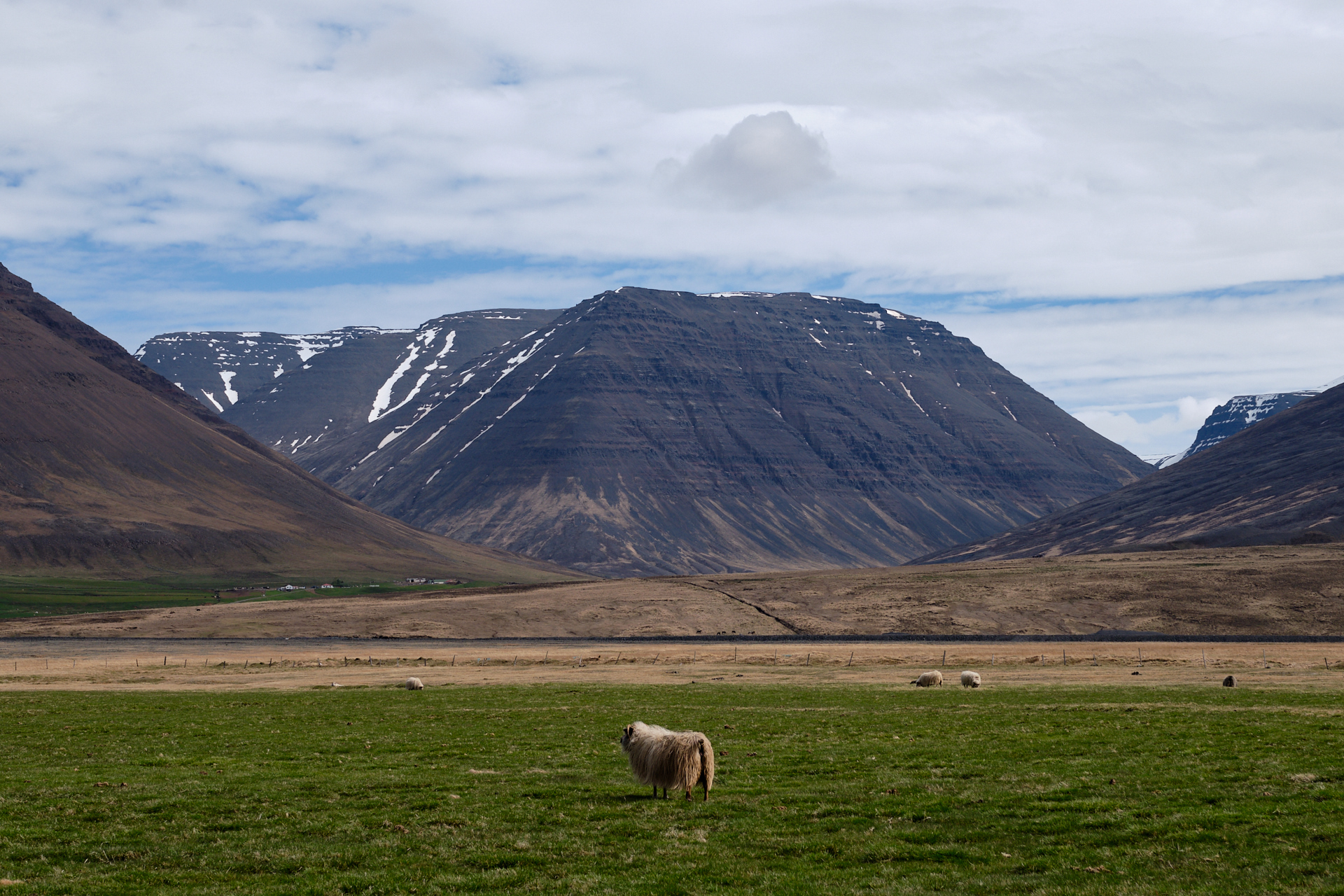 At one point we made a right turn onto road 75, that took us over two wide branches of the same river, coming from the highlands. Our next longer stop was at Glaumbaer. This was another place with old turf houses and a small church, similar to what we had seen the day before, but with a welcome addition of an old tea house. Even more welcome were the cakes and the coffee that was served inside, and the sunshine that finally managed to show up just as we got out of the car ;) 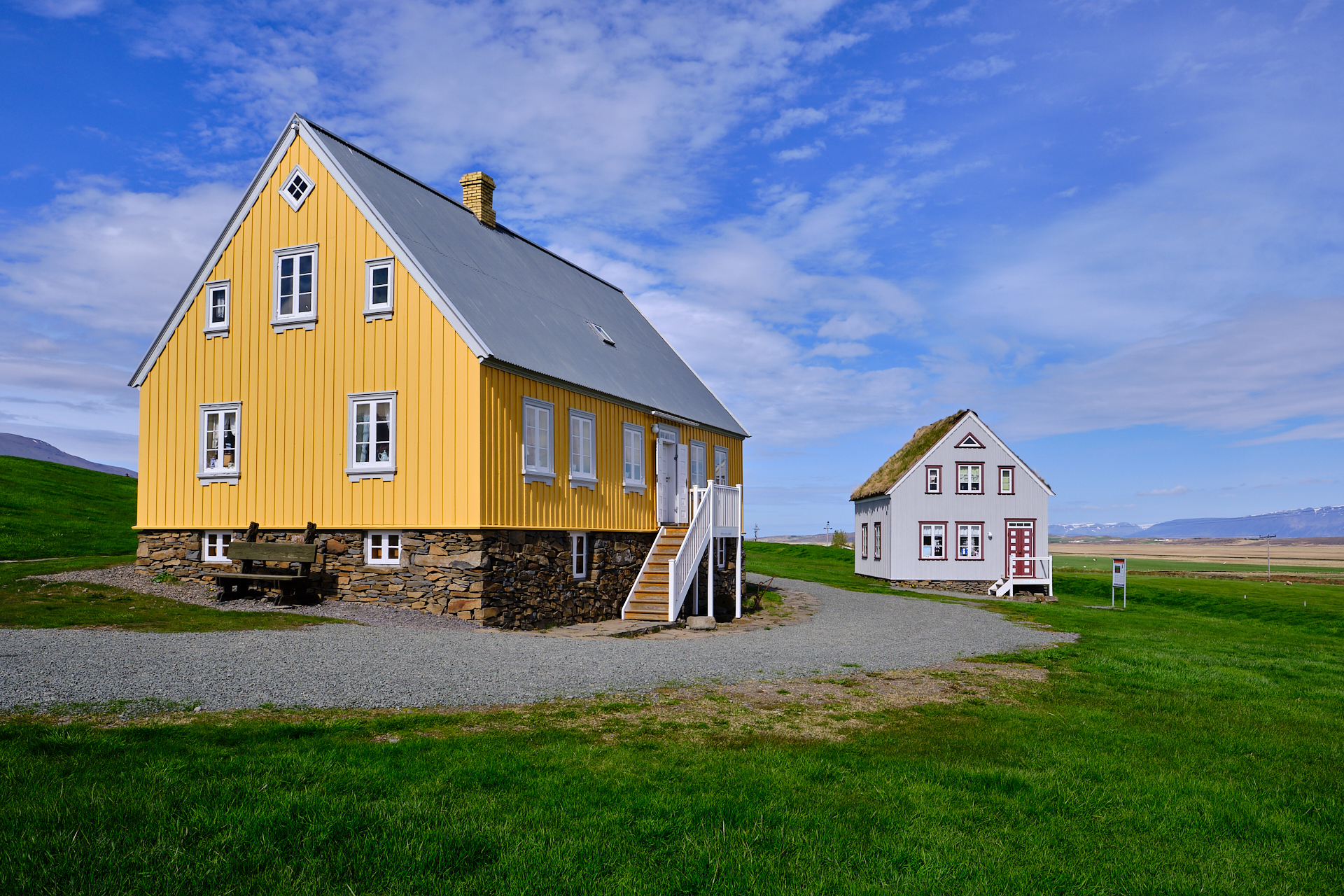 After “lunch” we made it back onto the ring road, and continued Westwards. I cannot recall much of this section anymore, but I remember very well what followed. At one point we left the smooth asphalt for a dusty gravel road (#716-717), which took us to a small lake first, then it climbed over a rocky hill that had some ruins on the top (we did not stop though). Finally we ended up on road 711 (still gravel), driving a few more kilometres further North until reaching the parking area above the beach of Hvitserkur. While we came here for the famous elephant-shaped (or rhinoceros, if you wish) rock formation, we stayed for the beach itself. 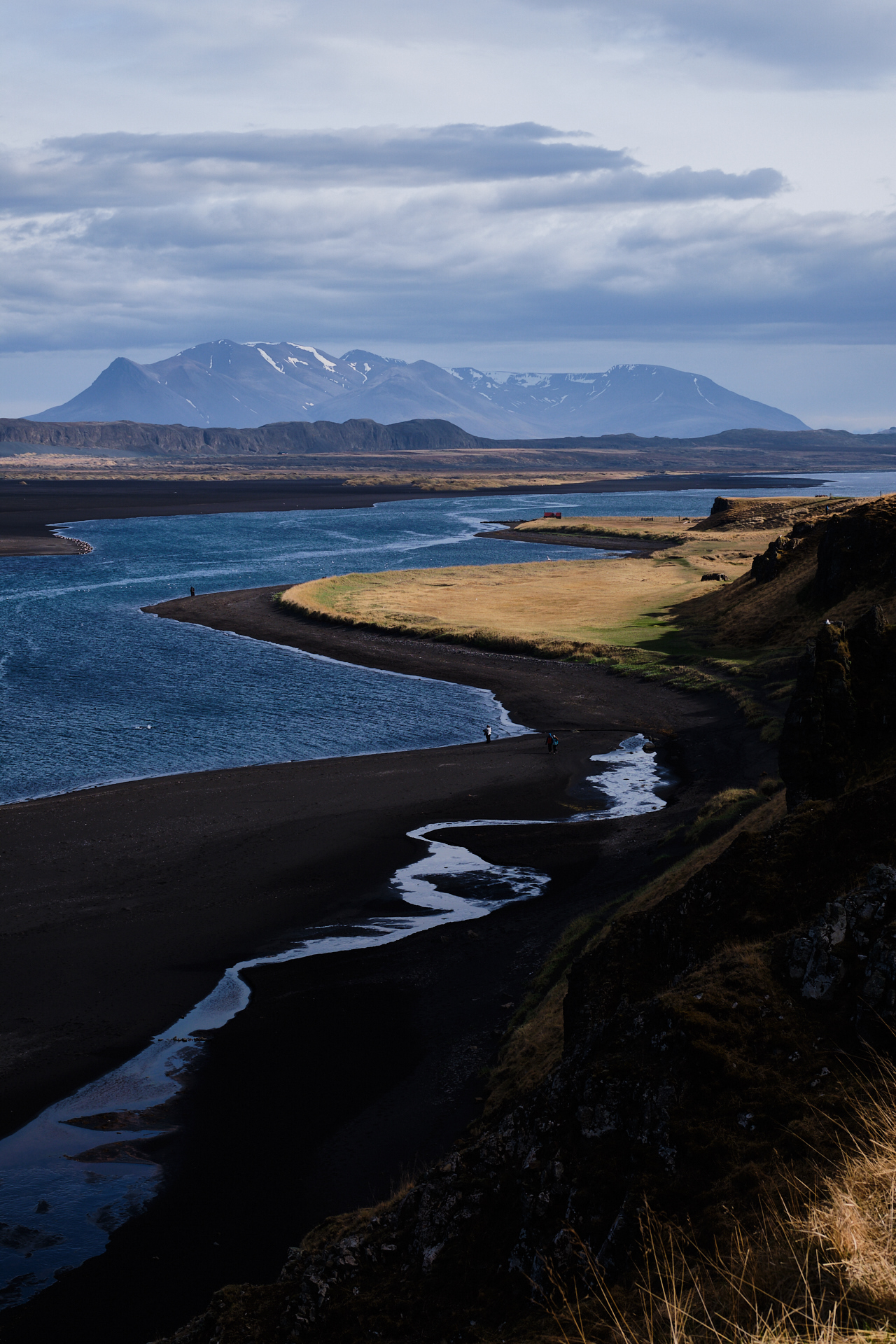 There is a narrow, steep path down to the shore from the parking area, providing beautiful views to the beach below, and to the dark sandbanks, grassy fields, and mountains in the background. The lights were quite good when we arrived here, creating a nice contrast between the black sand, the deep blue waters, and the vegetation coloured golden by the evening sunshine. 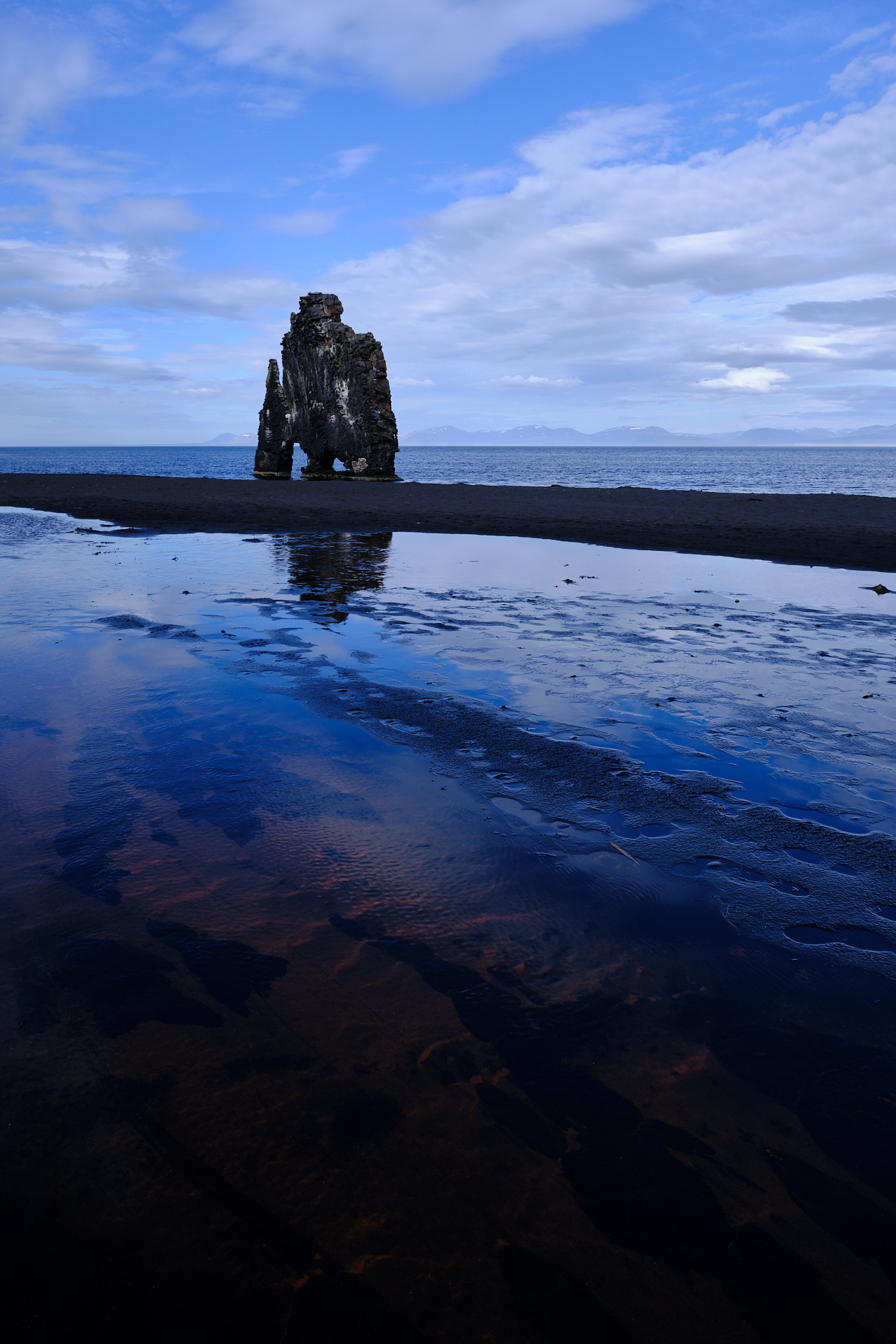 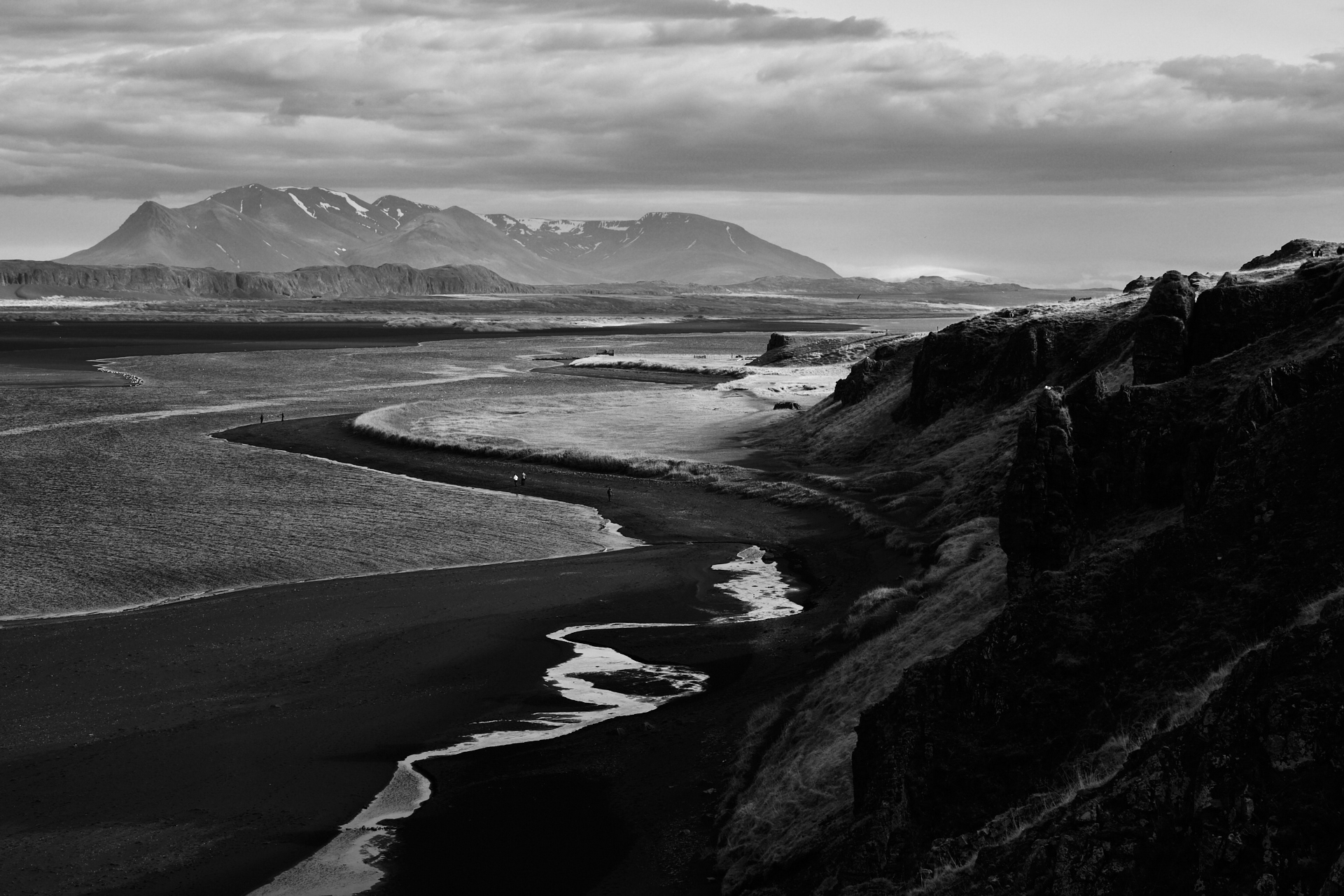 There were even some seals near the shore – to Clio’s delight (even though they did not want to play with her no matter how hard she tried to lure them somewhat closer). At the end we spent around an hour here, so our schedule caught up with us after all, even though we had skipped a hike in the morning… It still took quite some slow driving on the gravel road (#711), before we got back on the ring road, but then only two more kilometres to reach our guesthouse for the night (Gauksmyri Lodge). 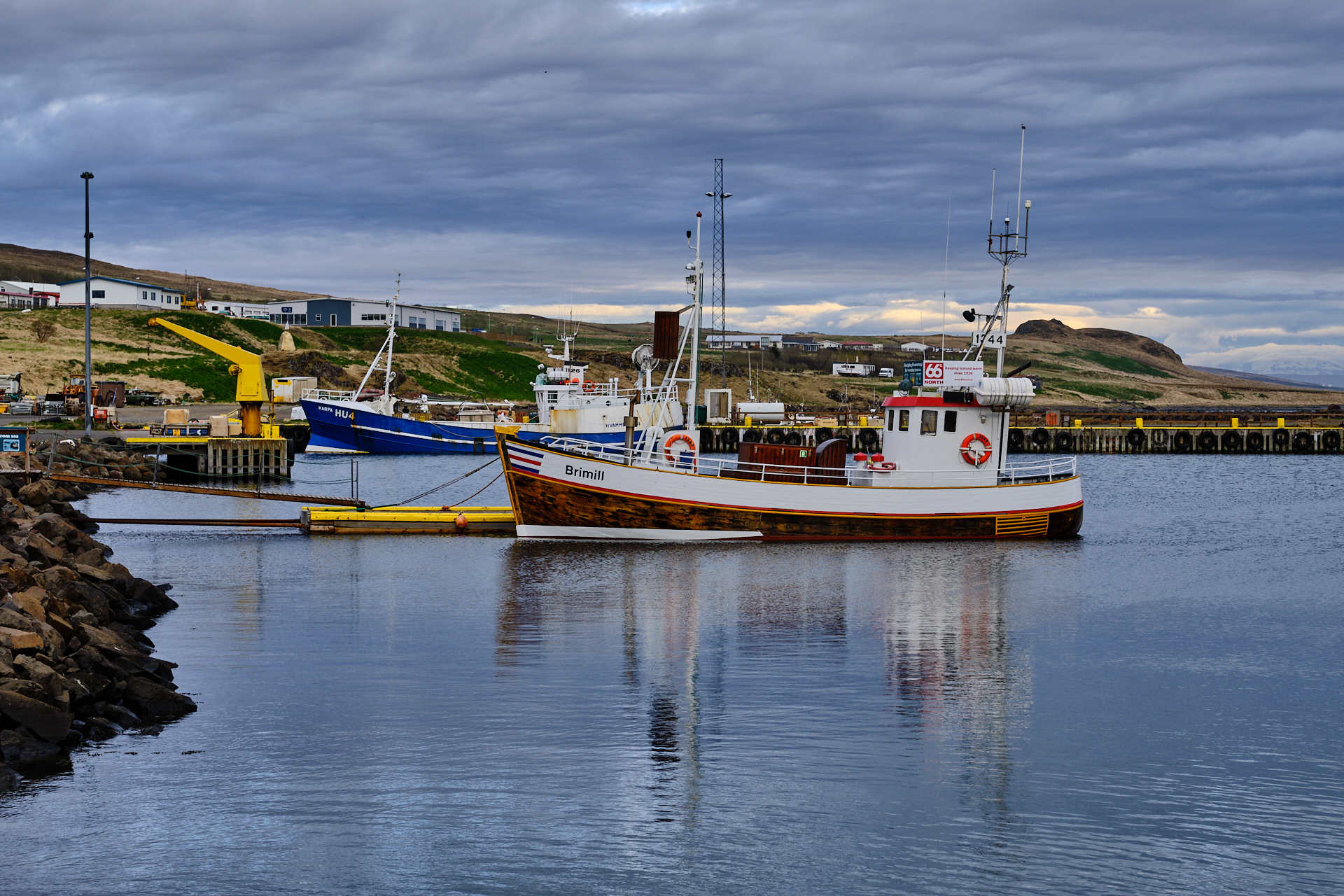 After checking in we still drove to the closest village – Hvammstangi – for dinner (we had very nice Italian food in the restaurant above the Icelandic Seal Center, overlooking the fjord), before calling it a day. (It was past nine by the time we made it back to our room…)