We had to get up way too early and have breakfast already at 8, because our schedule was once again quite full for the day. By half past eight we were finished and ready to go. Our first destination was waiting for us a good two hours ride further to the West. 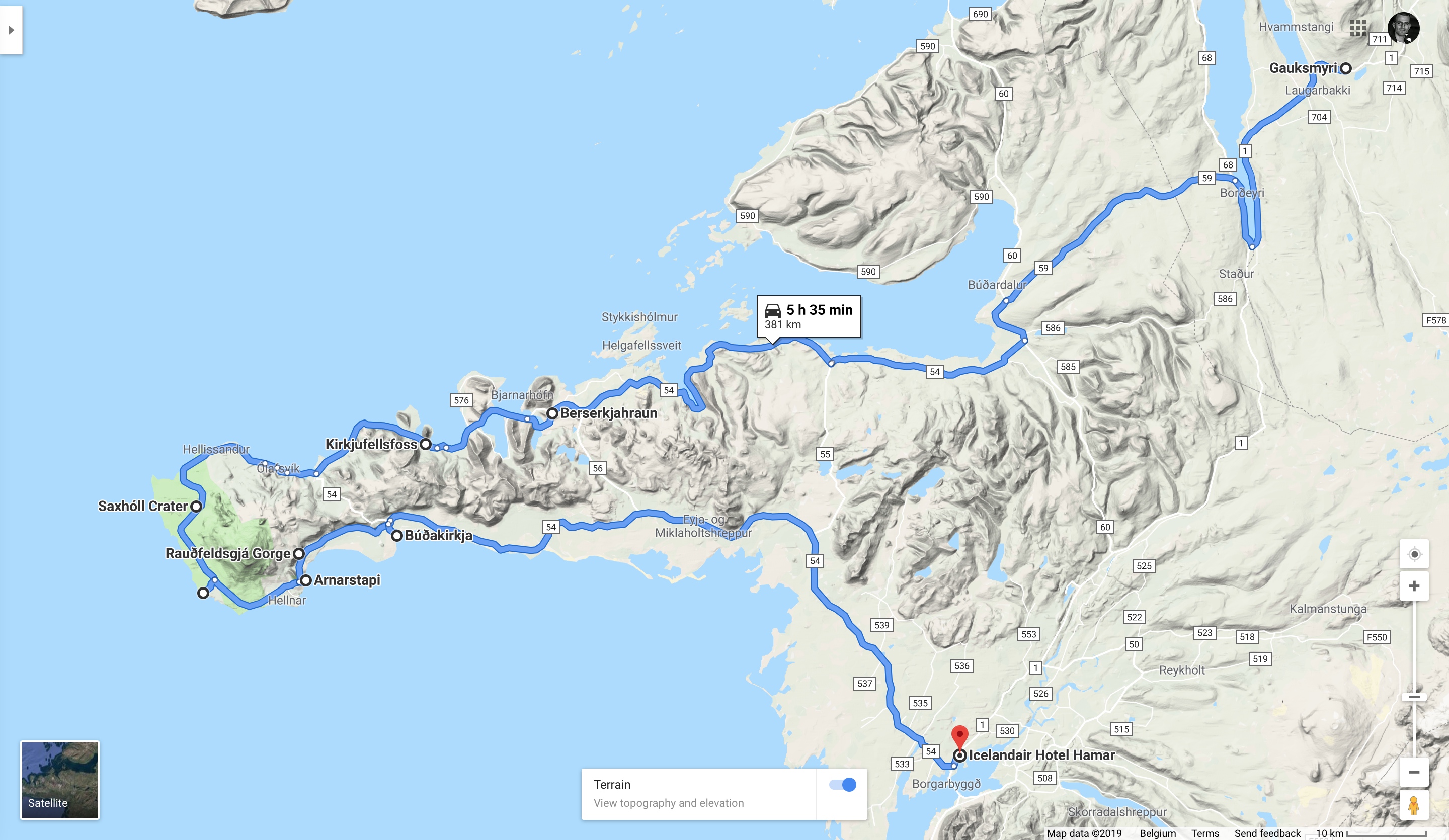 First we crossed some low grasslands, then while curving around the Southern end of the Hrútafjörður (with scenic views to the fjord, and multiple sighting of rainbows in the changing weather) we left the ring road behind and continued over road 68 and 59. The latter (mostly gravel) took us over to the other side of the peninsula which marks the Southernmost borders of the Westfjords – a region that we could not fit into our schedule this time (mainly because there was a chance that the two gravel passes along the route would not be open yet, as these are not kept clear of snow during the winter). Only a few minutes of asphalt followed on road 60 and road 54, before the latter turning into gravel for the following 60 km… I was quite glad that we had a 4×4, because while it would have been doable in a normal car, there were way too many holes scattered across the slippery surface, making the drive demanding enough in a 4WD. Luckily most people seem to have preferred the same counterclockwise direction around the Snæfellsnes peninsula, because there was basically no traffic in the opposite direction (on the otherwise not too wide road). We stopped on the way at a higher lookout point (catching a sunny interval between the low hanging clouds), that provided a nice panorama towards the small islands to the North. 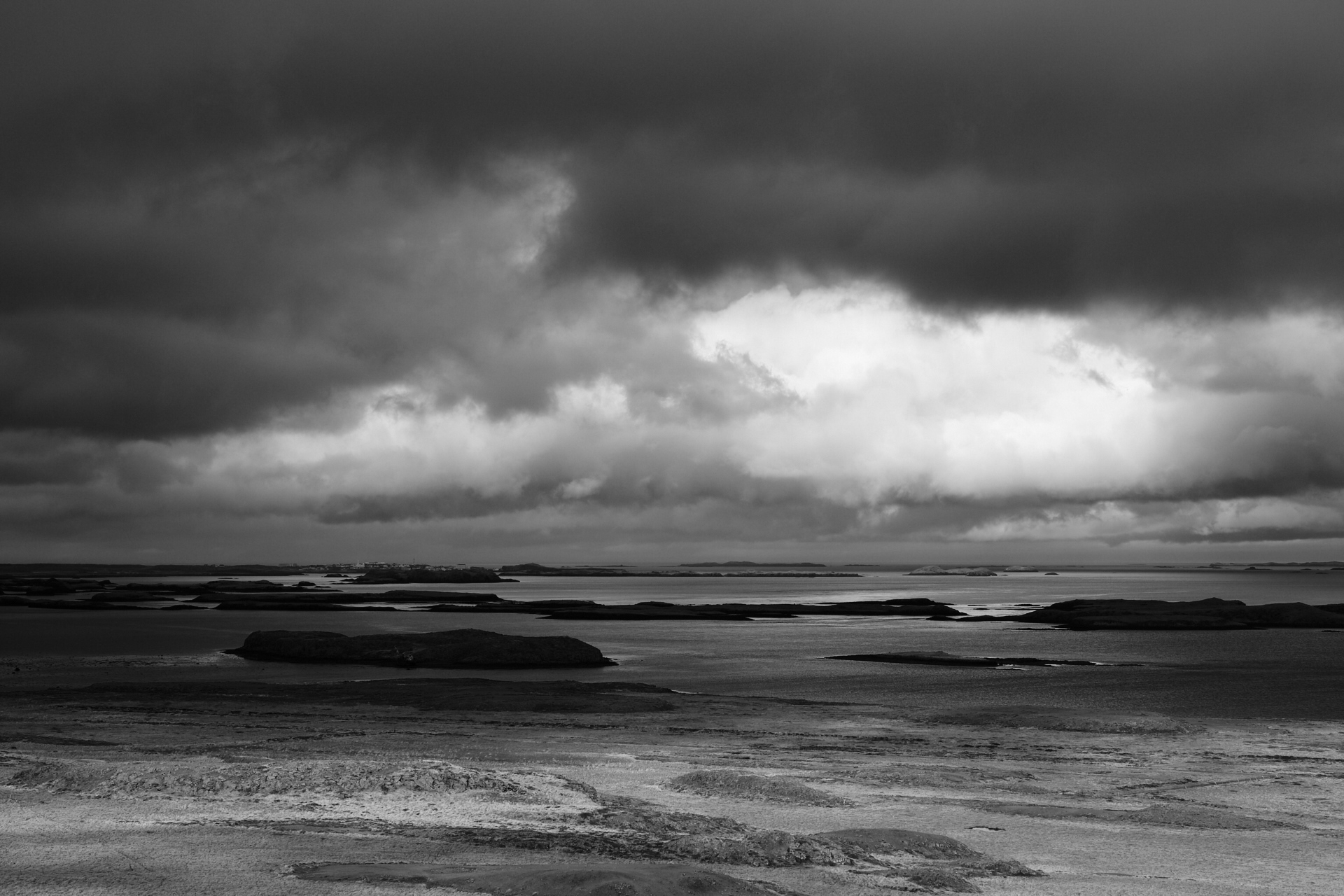 The whole drive was really pretty, we could have stopped anywhere to take beautiful photos – I especially liked the loop around the Álftafjörður, with views to the mountains above the narrow fjord. The road surface became asphalt again when we reached the crossroad to Stykkishólmur, but we had no time for visiting that fishing village. (By then the car “finally” got covered in mud, albeit a very thin layer – more of a spray of dirt -, so it started to look as a car should after so many days of driving around in Iceland.) I bit further down the road (just before reaching the Hraunsfjarðarvatn) we made a small – completely unmarked – detour to the left into the (green) lava fields, which was quite pretty (and I was excited to be there), but as it turned out there were similar landscapes along the road later too… 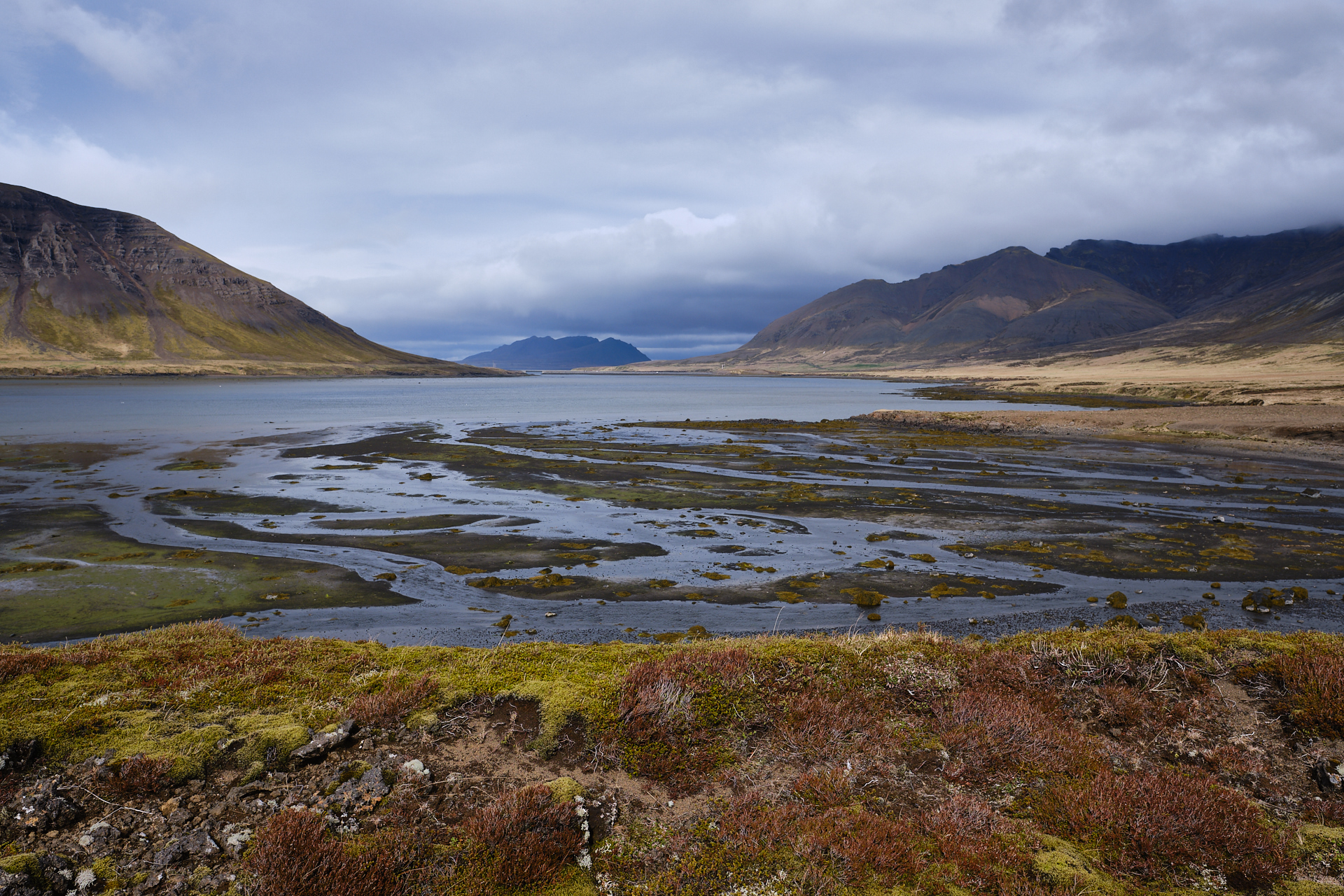 Showers were coming and going the whole day, and at this point I was quite concerned about getting soaked at the Kirkjufellsfoss, but miraculously it stopped raining at the very moment when we arrived to the parking stop, and it stayed dry long enough for me to take the most cliché pictures one can make on Iceland. It does not mean it was not beautiful though. Because it was. I used my tripod and the neutral density filters once again to be able to take long exposure photos of the scenery (typically 4-6 second exposure times at f/11 and ISO 160) . Luckily I knew well in advance that I would spend a lot of time here, so I had planned an extra half hour even on top of the usual amount in the schedule. 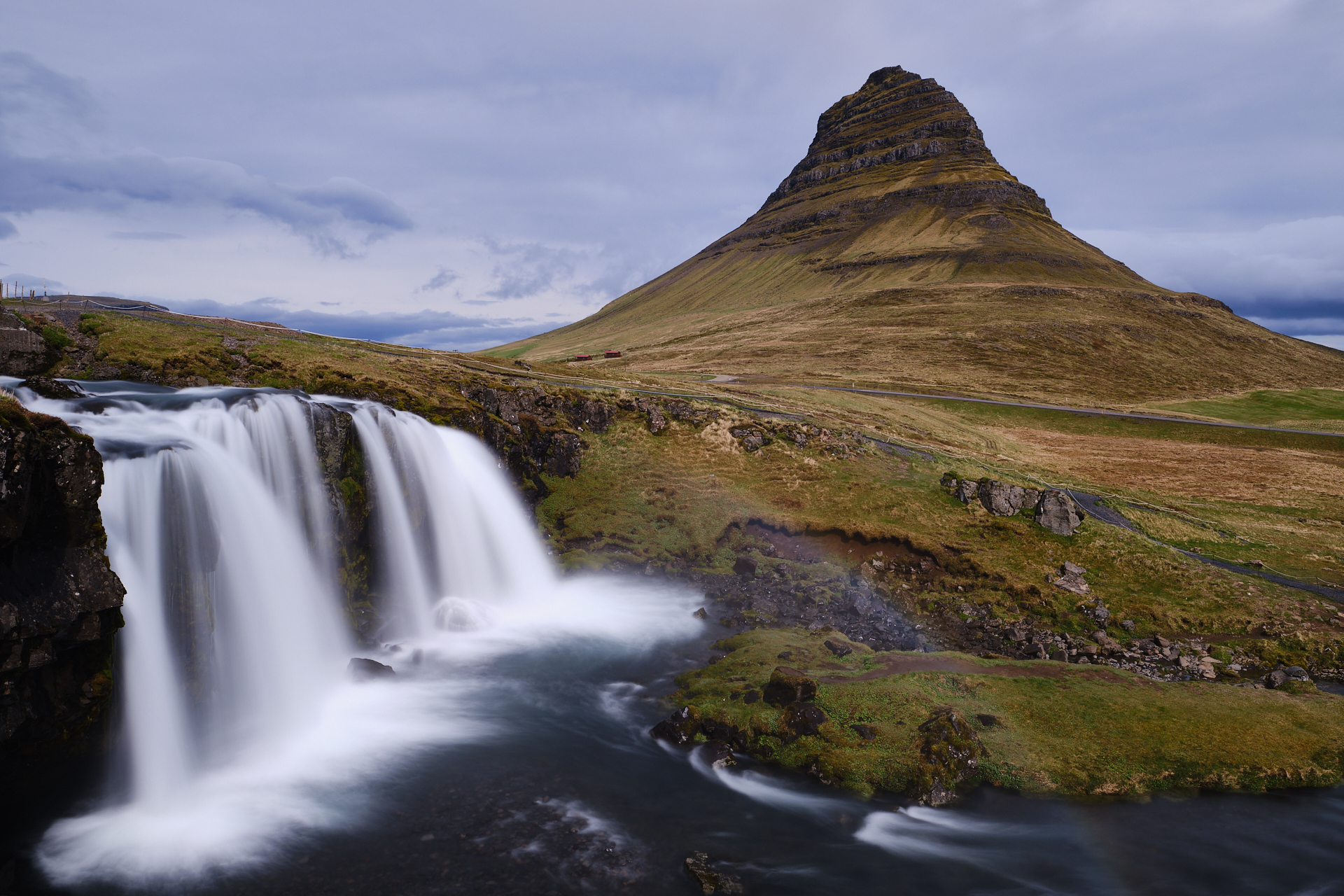 We got back inside the car around quarter to one. Our next stop – after a short drive – was at the N1 of Ólafsvík, where we got the usual delicious (and cheap) fish and chips for lunch. Petrol station food is a holy saviour on this island. When we left it was raining again, so even though we drove to the (not too well marked) parking area under the waterfalls of Kerlingarfoss and Svöðufoss, we decided that it was better to skip these (not only because it was way too wet for a nice walk, but also because we had seen enough waterfalls by then). It was still quite wet when we arrived to the Saxhóll crater (a small and compact, but prominent volcanic cone), but we still climbed it (on a long, metal staircase). Unluckily we could not see the peak and glacier of the Snæfellsjökull which was hiding behind the clouds the whole day. Another short drive further, around half past two we arrived to the beach of Djúpalónssandur. The road to this parking cut through bumpy, green and yellow moss-covered lava fields, while the path to the beach descended between interesting, tall rock formations. 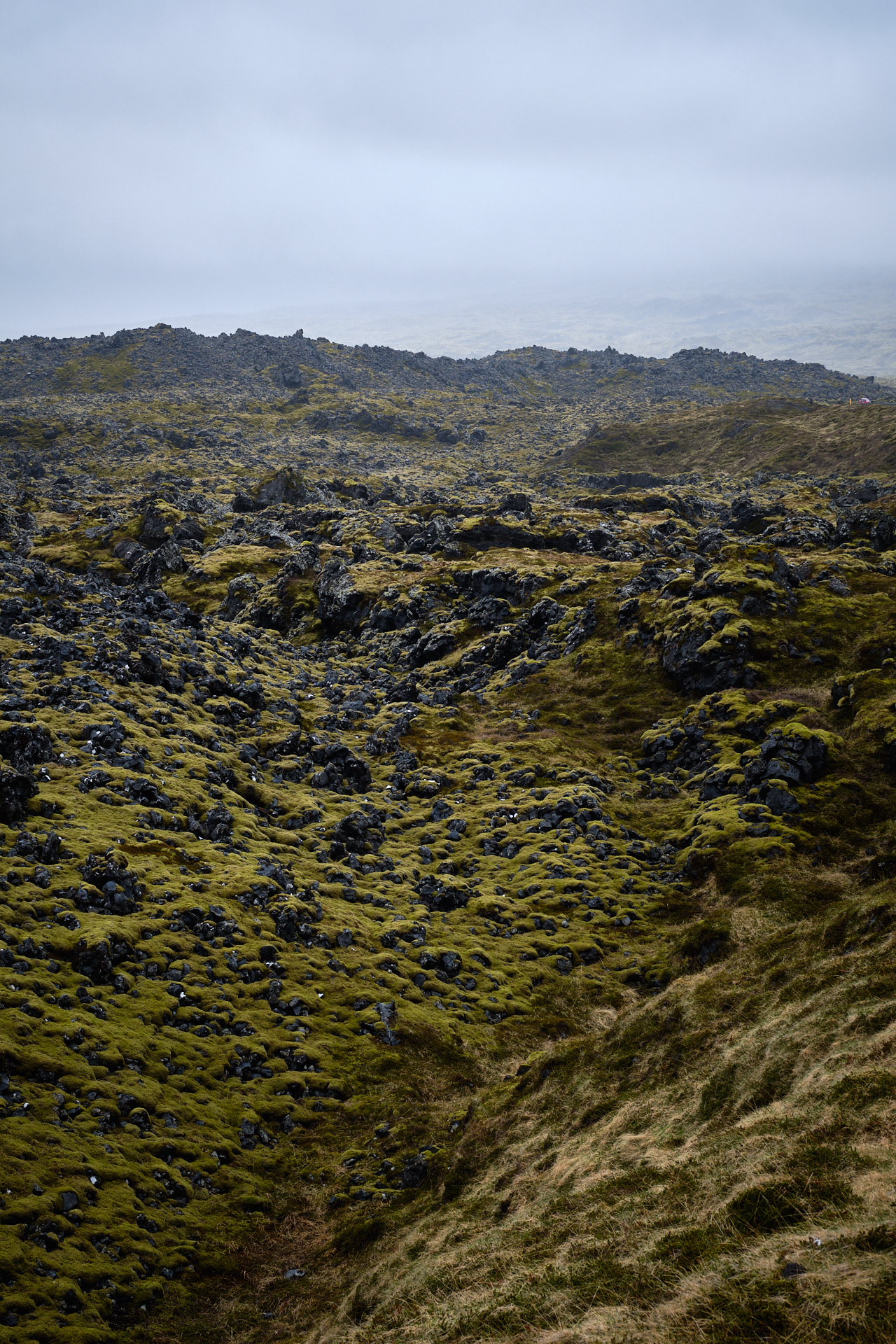 On the black beach itself the sea was rough and loud, and rusty pieces of two shipwrecks were lying everywhere – great scenes for a photographer. 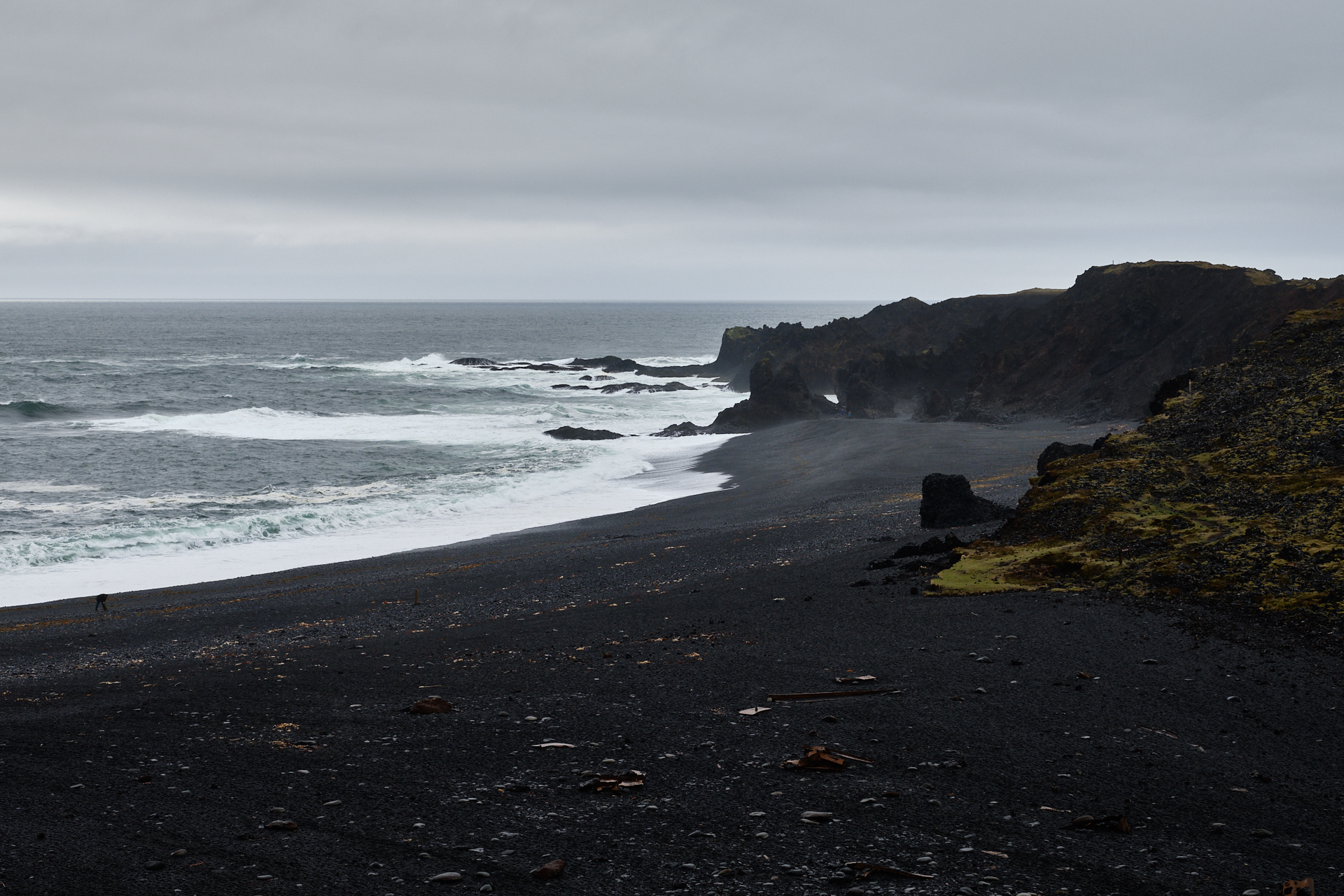 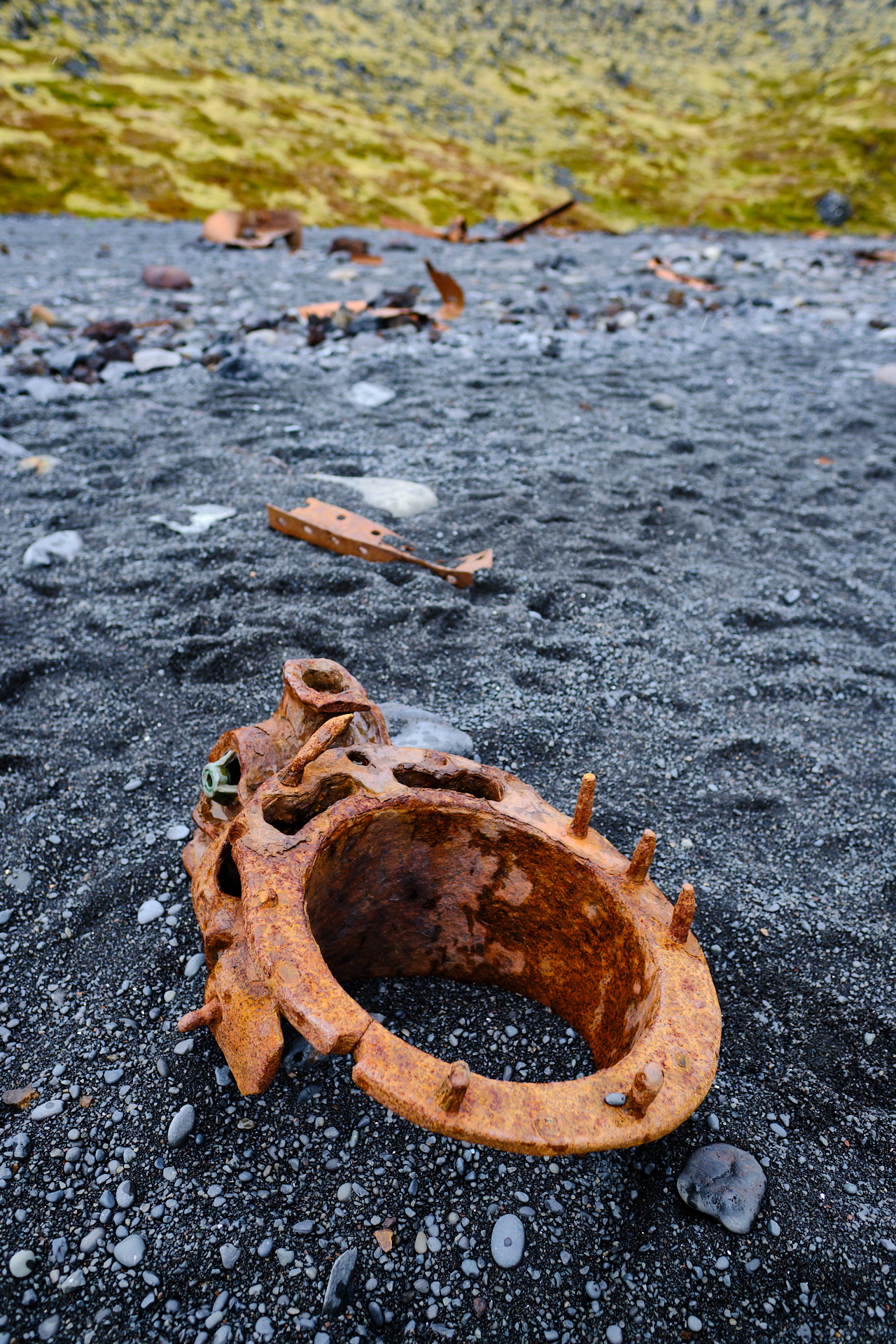 The next destination – the rugged coast of Arnarstapi – was again only a few kilometres further. Here we did a relatively longer (almost an hour long) walk along the edge of the cliffs, most memorably also to the edge of a circular opening lined with basalt columns reaching down from the surface to the sea below, providing a safe and protected nesting location to a few birds. The same basalt columns lined the whole coastline though, so there was definitely no shortage of them. 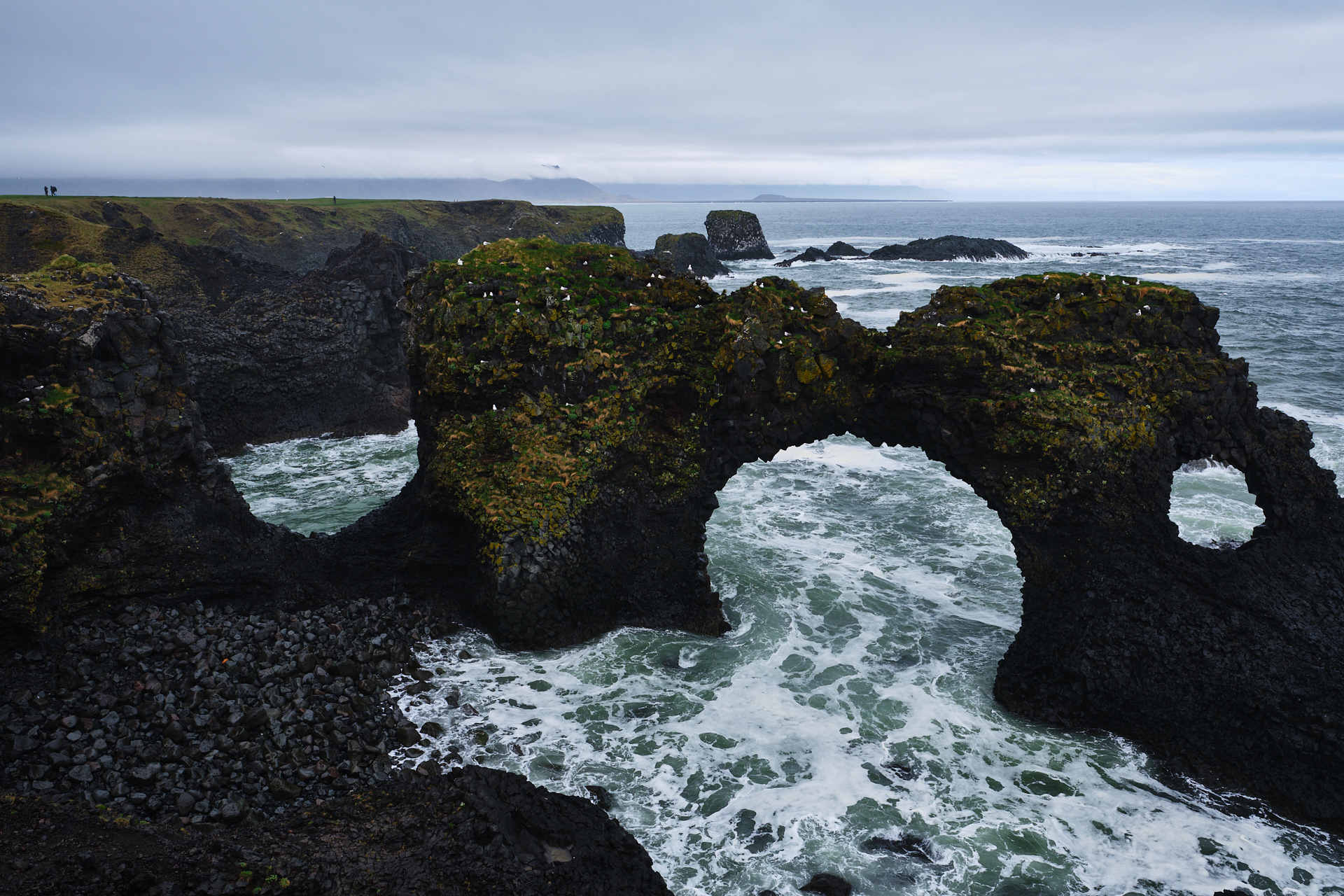 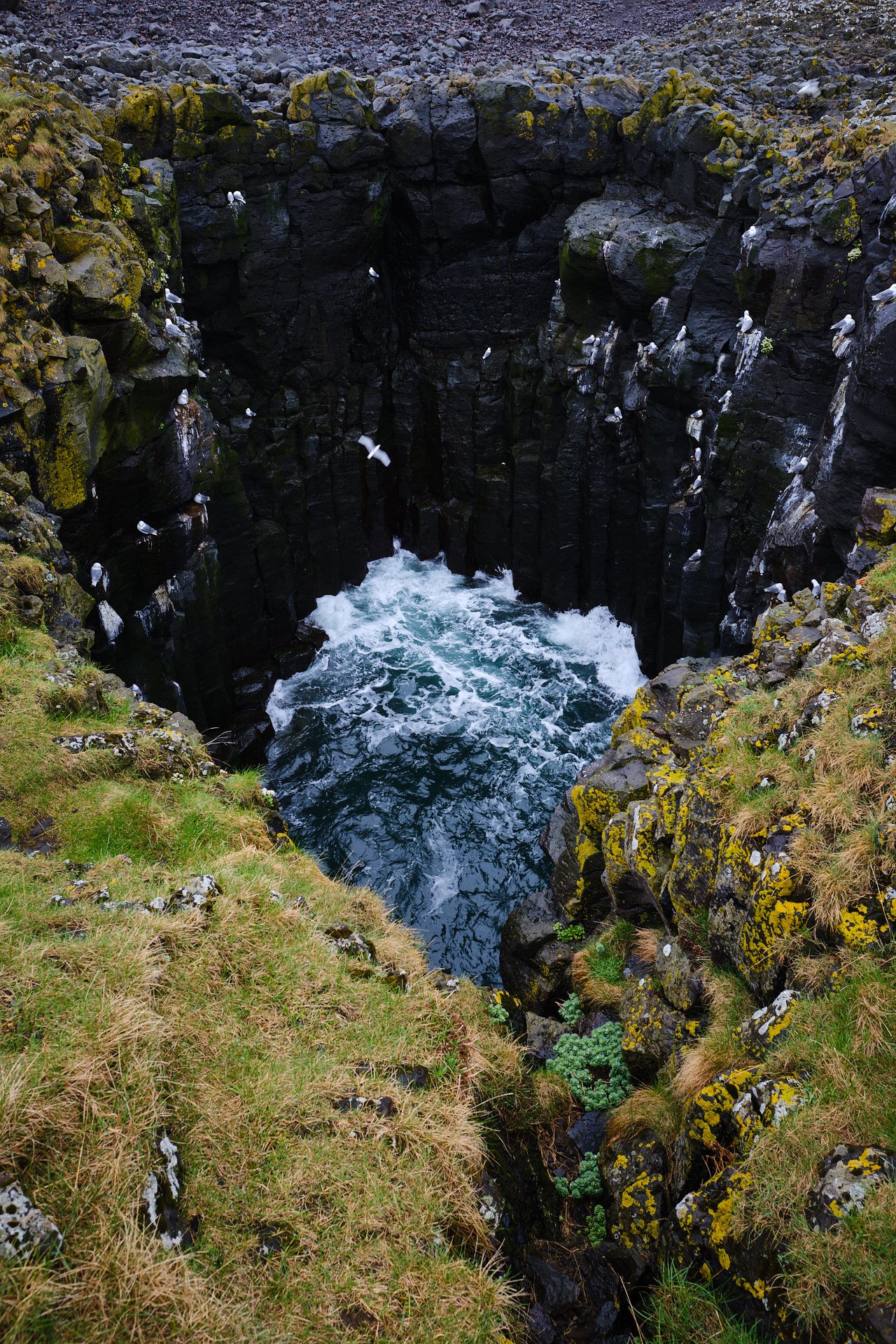 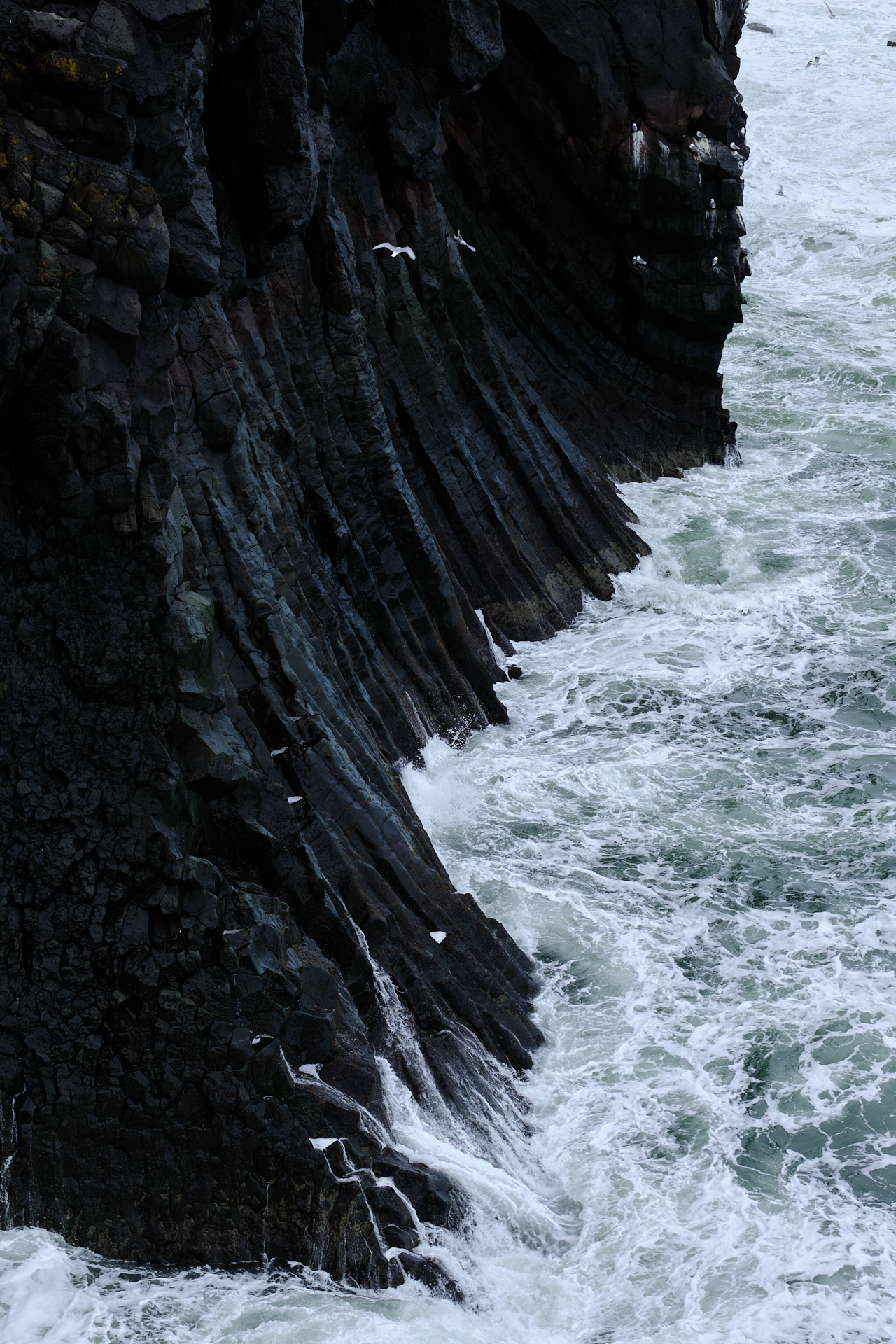 The next item on our sightseeing list was the Rauðfeldsgjá ravine, probably the most interesting geographical feature of the day. It is a very tall but narrow opening curved into the cliffs East of the Snæfellsjökull, and with flocks of birds circling above the dark opening it gave both of us the perfect Jurassic Park vibes. A short walk took us up to the entrance of the canyon from the small parking area, and we could even walk a few meters inside (navigating over rocks in the small stream flowing out from the darkness), but it was way too claustrophobic for me there to stay for too long. 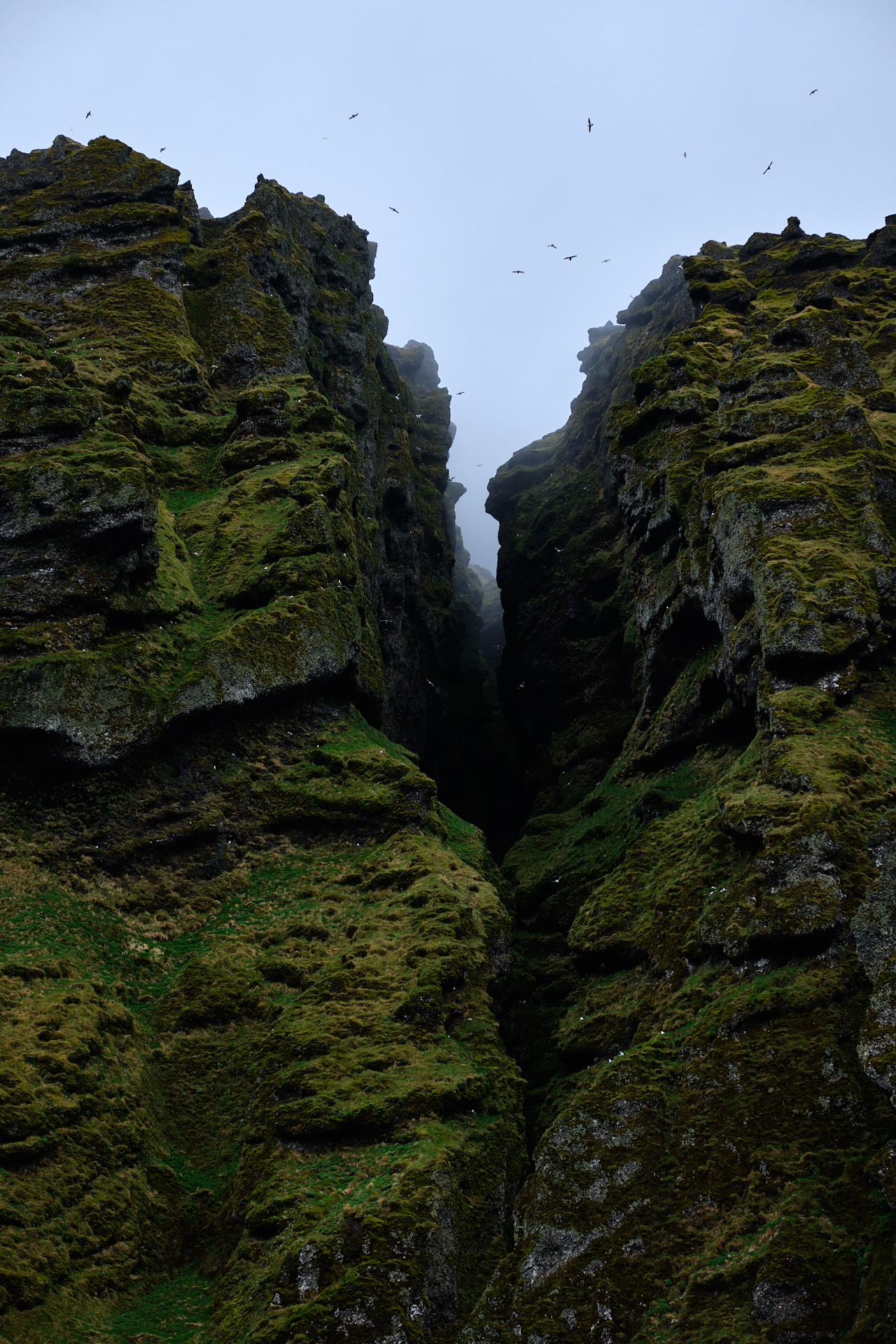 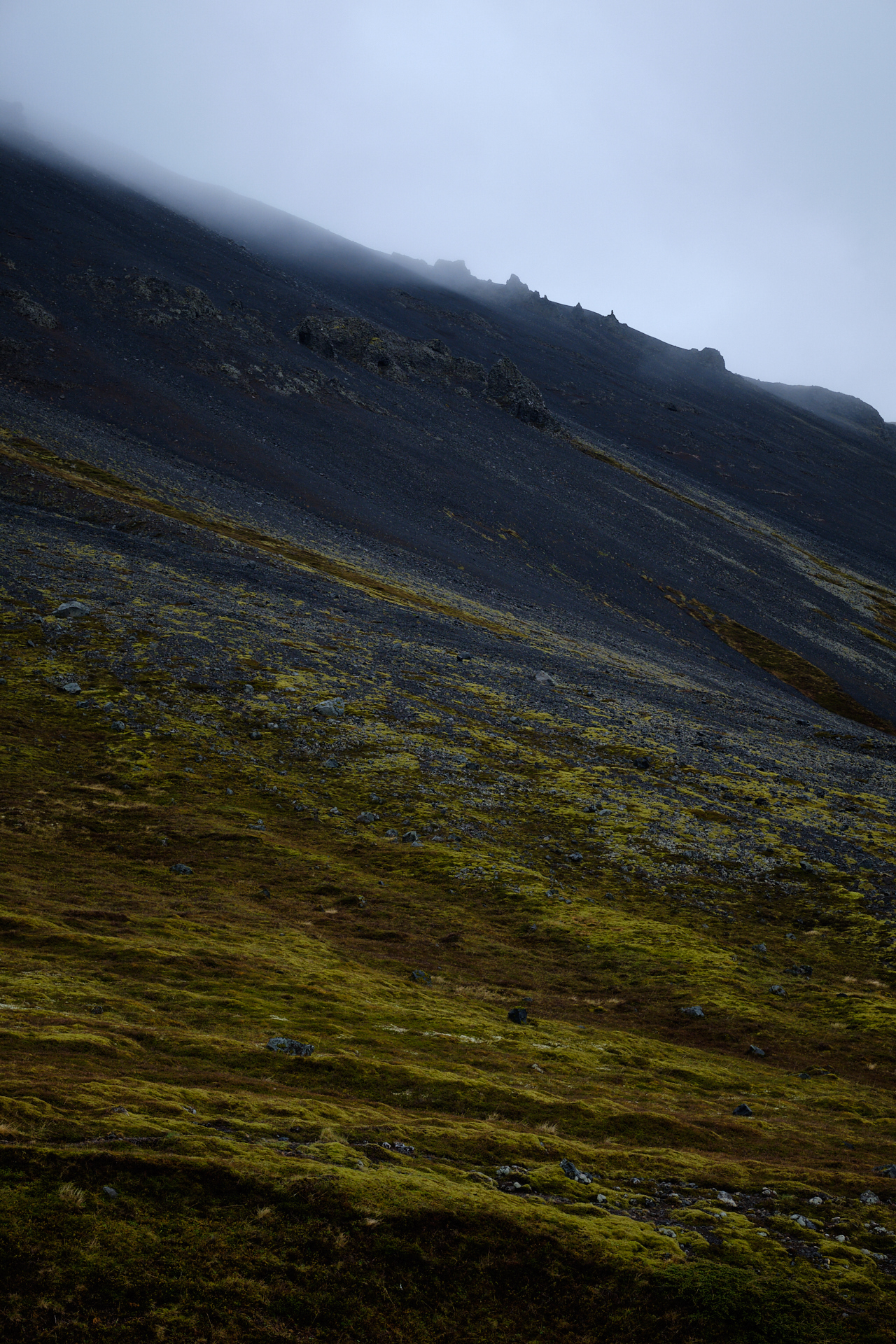 Finally, fifteen minutes from here we made a last stop at the Búðakirkja, a black church standing near the edge of a grass covered lava field. With the backdrop of the mountains of the peninsula, it was a really nice place for a short break. 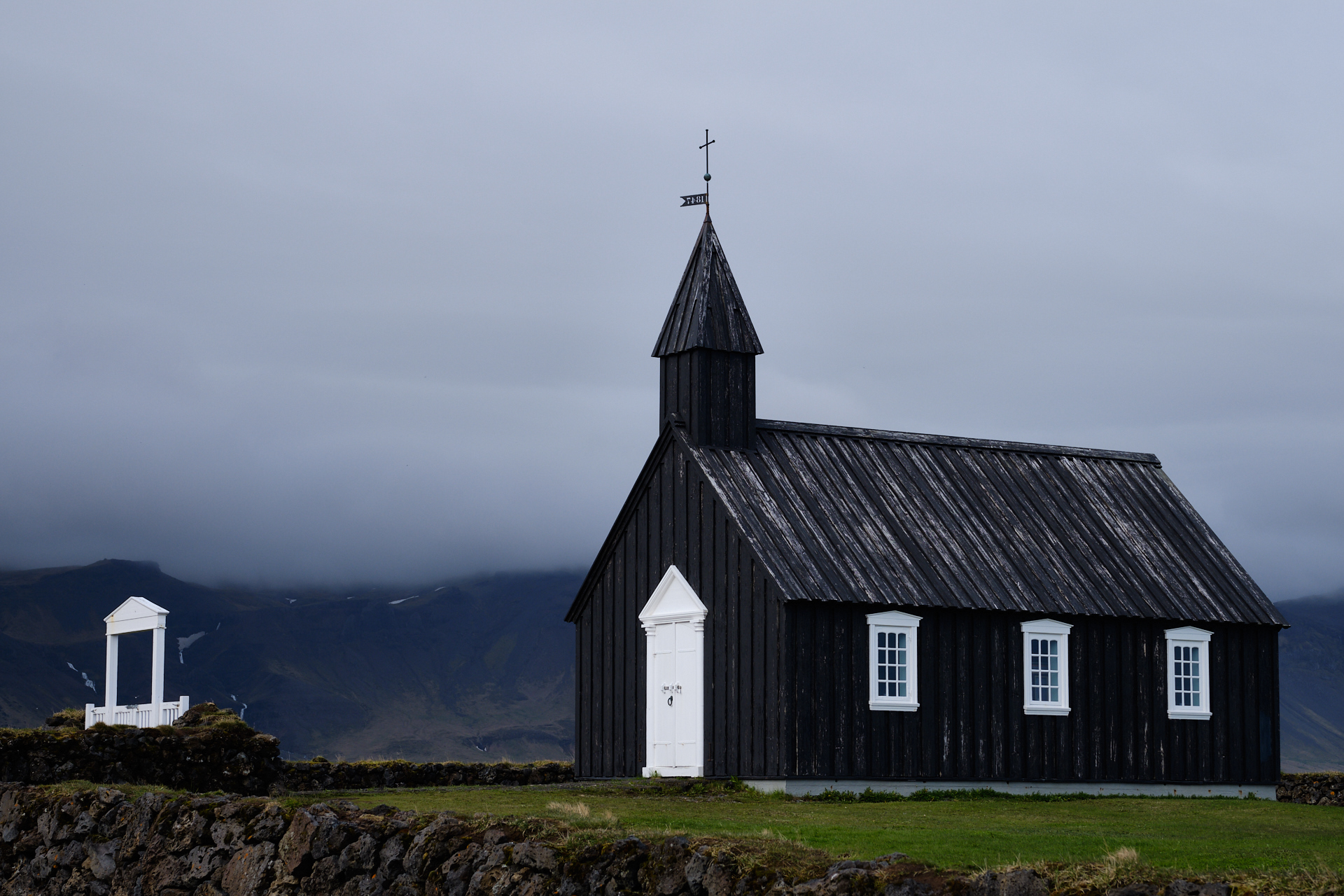 It was already half past five when we left here, and there was still a lot of driving (~100 km) to do… This was one of the most tiring sections behind the wheel for me during the road trip, and after the first half hour I could not really appreciate the scenery that much anymore (I was much happier about the 5 minute stop we made at a random tank station), as I just wanted to be at the hotel. It must have been seven by the time we checked in (Icelandair Hotel Hamar), but luckily we had planned having proper dinner in the restaurant of the hotel for once, so the rest of the evening went much smoother. The food was good and the view from our table was really nice, overlooking the golf course, with mountains and a rainbow in the distance…