During February and March I had four more flight training sessions at EBCI (Charleroi), bringing up my total flight time to 7 hours and 36 minutes (after 6 flights). (This sounds so little like this, it’s basically the amount of time I have to work on a single day, wow. No offence to my work, but I remember these hours slightly more vividly.) It happens that I flew with all the four different Sonaca 200 planes my flight school has, including the brand new OO-NCD (or for my non aviation inclined readers, this is pronounced as Oscar Oscar November Charlie Delta, which had only 22 hours of air time when I sat in it; unfortunately I can not report the presence of a new-plane-smell anymore). I also flew with three different instructors, which definitely helps in getting feedback from people with slightly different approaches (and yes, I have my favourites already, but in general I am very happy with everyone I have flown with so far).

There is way too much stuff in my flight bag already, so I am not carrying my Fujifilm X-T3 with me anymore (even though I would love to take better pictures here and there, but there is simply not enough space or time for it), but I have installed a GoPro camera in the cockpit for these flights. For Flight 3, I had my old GoPro 4 Silver as a test, to see how useful or interesting having a recording of my training is, but then I bought a new GoPro 8, which – thanks to the amazing image stabilisation features – provides a perfectly vibration-free result (in 4K – I don’t even own a 4K screen, but this is 2020, people). By Flight 6 I also had the tech to record the radio communication too, but I messed up the settings so instead of having the recording of me talking to the air traffic controllers of an international airport or listening to the great comments of my flight instructor, I got one and a half hour of video without sound. Anyway, I think I know where I made the mistake, and it should be all good the next time (whenever it will be – thanks Covid-19!).

I have posted the most interesting parts of the flights online (edited in DaVinci Resolve 16) on my YouTube “Channel”, with timestamps and more detailed comments in the descriptions, so I will not go over everything here, just have a summary of what I learned (click to the videos for more). Flight 3 started with my first unassisted take-off, then we did climbing and descending turns.

During Flight 4 we did high-power low-speed climbing turns and low-power descending turns (to feel the different rudder input necessary for a balanced flight in these situations), then we experienced slow flight (flying at and around the speed associated with minimum drag). I had my first transmissions on the radio (talking to Ground and Tower until the take-off point as a start). [You can compare the quality of the first two videos, amazing how stable the new GoPro is, right?]

Flight 5 was mainly power-off stalls in various flap configurations (first clean, then take-off, and landing). At the end I finally got to make a full approach and landing on my own, it was great. Now I did all the radio communication except for the phase between returning to the CTR (the control zone of Charleroi) and landing.

Flight 6 was the best training so far. We headed over to EBNM (Namur) for my first circuits and touch-and-gos (meaning that a landing is immediately followed by a take-off, without stopping). EBNM has a 690 meter long and 25 m wide asphalt runway, which felt very different to the huge runway at EBCI (2405 m x 45 m), but it was a very good exercise. I did 7 landings and 2 (planned) go-arounds, so 9 circuits (or patterns), before heading back to EBCI where I had my 8th landing of the day. Here and there the wind was a bit gusty, and there was a light, but variable crosswind too, so some approaches were more challenging than others. 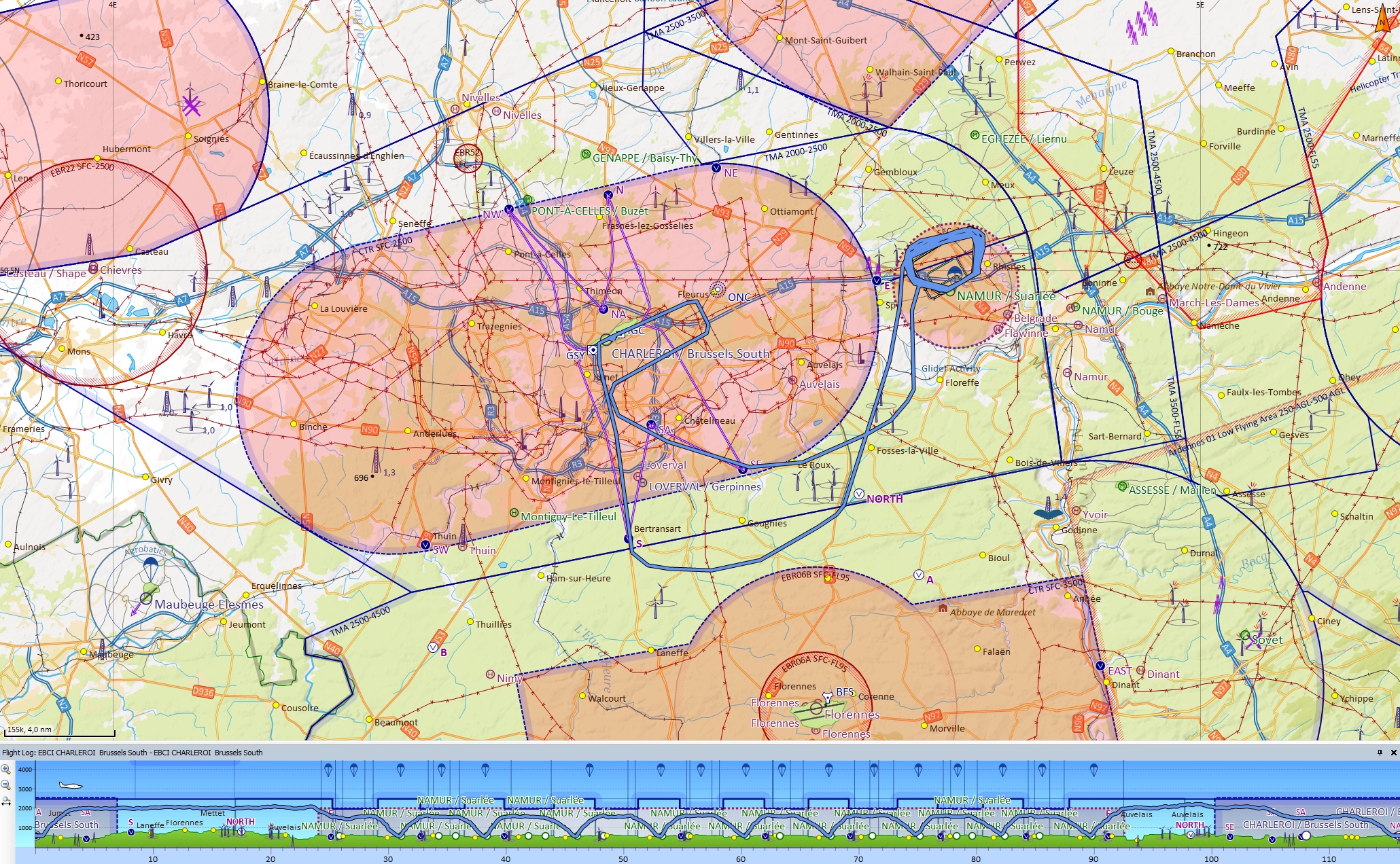 I did all the radio communication until the start of the touch-and-gos, but from then on I had enough to do with flying and navigating (so my instructor took over the radio there, until we were back on the ground at EBCI). This is completely normal at this point during the training. It was an extremely rewarding training with a very steep learning curve, and I managed some very good landings in the second half of it. By now I am also familiar with all the visual reference points that lie to the South of the runway (since we have never went to the North so far). It was also the most tiring flight of my training so far, not only because it was very long (almost two hours), but also because it was very active, there was barely any straight and level flying, there was always something to do. I loved it. (On a side note, EBNM was the first airport I modelled in detail for X-Plane 11, so it was great to finally visit it in real life too!)

Unfortunately Covid-19 screwed up everything, so no flying in the foreseeable future :( Normally I would have had my security briefing at Charleroi today to get a badge to the airport, and I had training flights booked for every week until the first Sunday of April… Time to proceed with studying the theory and flying in the simulator I guess.