Tuesday was my last day on the Tour de France. As I already had ~900 images from the previous three days, I decided to leave the heavy equipment (and my press-card) behind, and hit the road on my racing bike, to catch the peloton at the one and only climb of the stage, at the Côte de Bothey (1.4 km climb to 3.4%, Category 4 – basically this is nothing, you can not even notice such a slope if you are riding in the peloton). Of course this meant that I had only my compact camera with me, so the pictures from this day are incomparable with the ones from the previous stages – but when you are not paid by a professional agency, then you have the freedom to choose between good pictures and just pure fun. That day I went for the fun only. We (as Tijl and Kristof – a postdoc and another PhD student, both from Belgium – did also join me on that day) left the Institute of Astronomy at 10:45, so we had three hours to our destination (as the expected arrival time of the riders at the climb was between 13:44 and 13:50, assuming an average speed of 46-42 km/h). As the distance was around 48 km, this was a very safe plan. The roads were generally OK, though we ran into some trouble with one-way streets in Wavre, and we had to ride on cobblestones for 5 km between Court-Saint-Étienne and Villeroux… I have to say that really do not like (or using the word “hate” might be more appropriate in this situation) the cobbles, but I tried to look at that part as the final stage of my integration into Belgium as a cyclist, which made me feel a bit better, and struggle a bit less. Still, the pain building up in my hands during these kilometers was incomparable to anything which I have ever felt on the bike before. And these were really the worst kind of cobbles, with large spaces in between the stones, and with a road-surface which was far from flat with a small bump running along the middle, and two small depressions along the sides (created by cars passing through). But this was the day when even the Tour riders had cobblestones (13.2 km compared to our 10 km, but on a route which is twice as long as ours), so at least we got to know the pain they had to go through later on… Anyway, at the end we arrived a bit more than one hour before the scheduled pass (just after the publicity caravan had passed). 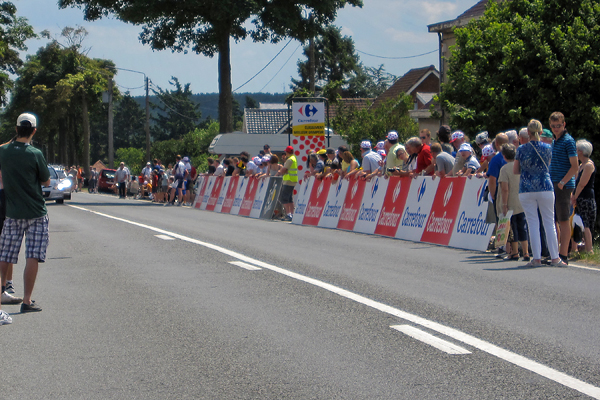 The weather was really nice, sunny but not too warm, not too windy, with no chance of precipitation during the whole day. While we were waiting for the peloton to arrive, we asked someone to take a picture of us (check out the Hungarian flag which I brought along with me): 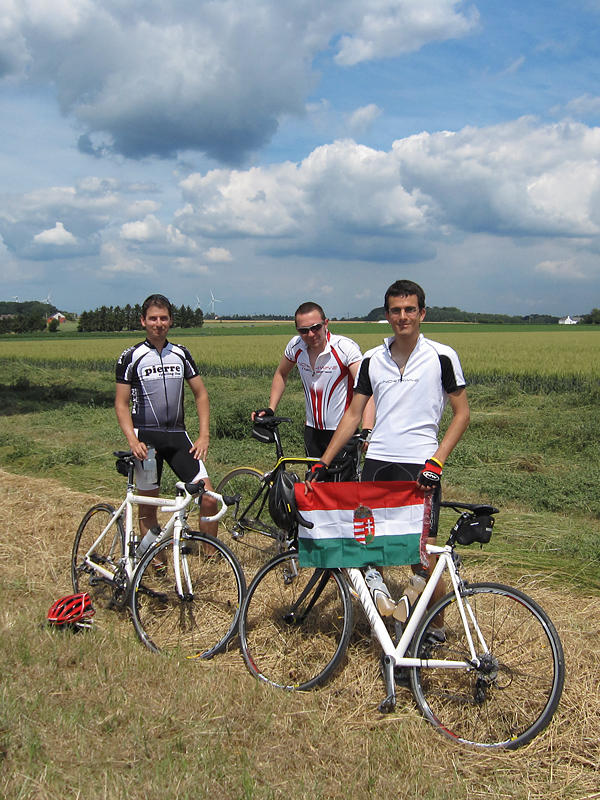 The breakaway group arrived almost exactly on the expected time, and the peloton followed them 4’45” later. We made some interesting observations about the whole stuff around us. 1) The number of support cars and motorcycles are incomparably higher than the number of cyclists. They are just coming and coming and coming for long-long minutes before and after the riders. And knowing that e.g. the team buses move along another route to get from the start of the stage to its finish, it is really shocking to see, that there are still this many vehicles following the peloton itself. 2) The climb was not big, still both the breakaway group, both the main pack was relatively slow after the “top”, so they probably just took a short recovery break there… 3) The gap of 4’45” felt surprisingly long.

After the closing cars passed, the organizers started to clean up everything very quickly, so we had to be fast to make a picture with the gate itself on the “top”. But we made it of course. (I know it’s way too over-photoshopped, but the lighting was terrible, and our “photographer” was and old French guy who probably took his first picture with a digital camera at that very moment…) 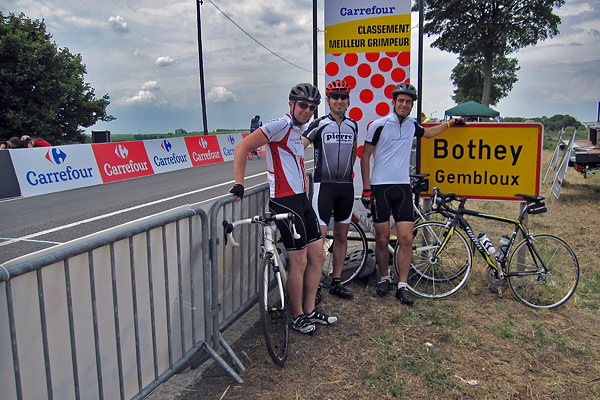 On the way back I tried to keep up with Kristof on the climb with cobblestones, and I managed, but as soon as we left the slope behind, he dropped me immediately. Yeah, he is definitely the King of the Cobblestones among us. (Though if there are no cobbles, no one can stop me ;D) But you really have to be a native Belgian to be able to ride fast on these roads. I think it is in their genes. When I arrived home (which is a mess now, with clothes and gadgets all around the place, as I had no time to clean up anything in the last days) I was still in time to watch the end of the stage with several paved sections (it was crazy!), then I left to play badminton with my colleagues… Yes, we have a very sporty department!

Now something for the geeks among us. I lost the second part of our ride, because I had only a one-way course loaded into my Edge 500 cycling GPS, so while we were riding back to Leuven, it was complaining all the time, that I was off-course, etc. Then after a while (on the biggest climb right after Wavre) it just died… So, if you want to follow a course back and forth, have both legs planned! And some interesting sites on the net for the Tour-fanatics: 1) You can follow the HTC – Columbia riders on Google Maps live here. 2) You can check the recorded data of selected Garmin – Transitions riders here. These are both really cool projects!

This brings us to the end of the story about me and the Tour de France of 2010, it was a great experience, a lot of fun but also hard work, and I hope to repeat it somewhen in the coming years. With a bit more sleep, if that is possible. Vive le Tour!