I expected the second day to be hard and beautiful, and I was right. It was almost 11 when I left the hotel, and I took the same road (with a small detour caused by road-works) till El Sauzal as on the previous day. The weather was the same, cloudy in the Orotava valley, but warm and humid, then as I left the valley, it became sunny too. So the first third of the first categorized climb (starting at 18.1 km) was the same as on the day before, but then I turned left and continued on a smaller local road towards TF-16:

Some of these small roads – even the ones with local bus traffic – can be pretty steep… Then I got a nice descent on TF-16 all the way down to Tejina. There I probably missed the main road and made it to TF-13 on one way roads through the city center, already starting the next ascent of the day (oh, because there were only ascents and descents, basically no flat sections…) at 30.64 km: 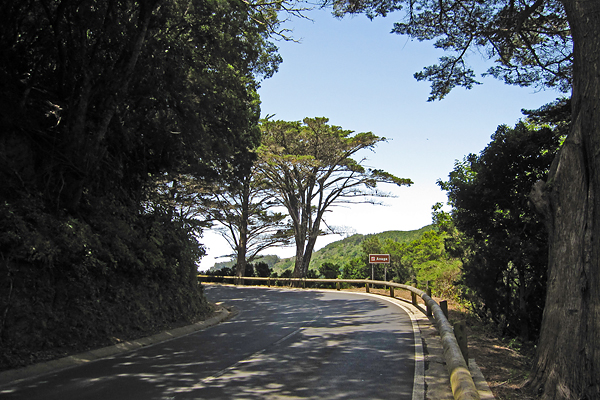 This was the ascent up to the top of the Anaga mountains, which is the oldest part of Tenerife. And also one of the most humid parts (along with the Orotava valley). There are almost always clouds above the northern part of the mountain range, and right after these clouds roll over the ridge, they disappear. But parts of the ridge are always in the cloud layer, with strong winds blowing from the north. The ascent is long, but not too steep, with really good road quality and nice views. And some amazing switchbacks (here an excited family asked me if I was a professional, and then they were completely amazed when I said no – I still had some power in my legs at that point :D)! 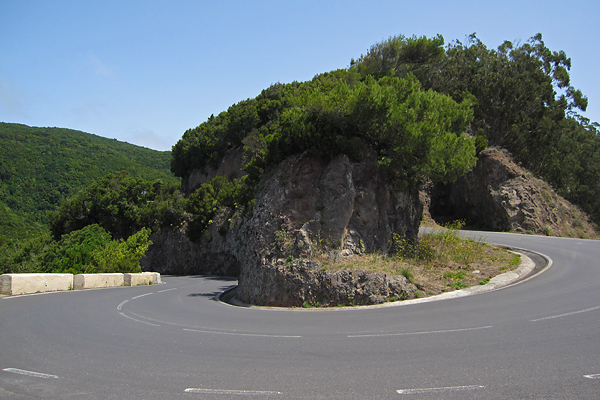 I was really happy that the road went through the forest, because the first part of the climb after leaving Tejina was extremely hot, and I did not feel too good about that… I think my biggest problem this week was/is cycling in the heat. I can not handle that too easily. I never had problem with humidity, rain, wind, but I have difficulties in extreme temperatures. After reaching the top of the 1st category climb, I left the main road for a quick visit to the Pico del Inglés, to enjoy one of the best views towards the island from there (the lights would have be better on the morning, I know). 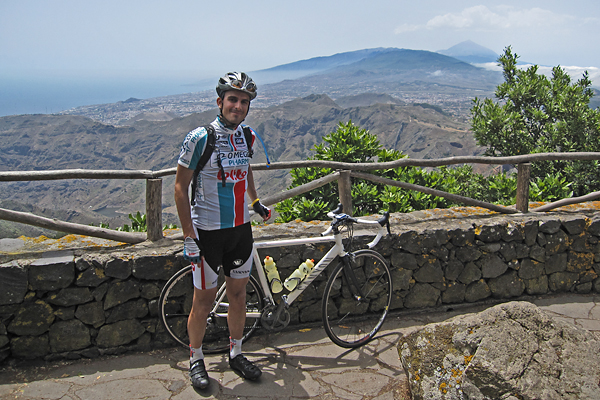 After I left from here, the road disappeared into the cloud layer during the descent (with some ascending sections to break the monotony), and the temperature dropped significantly. As expected, it got pretty windy too. 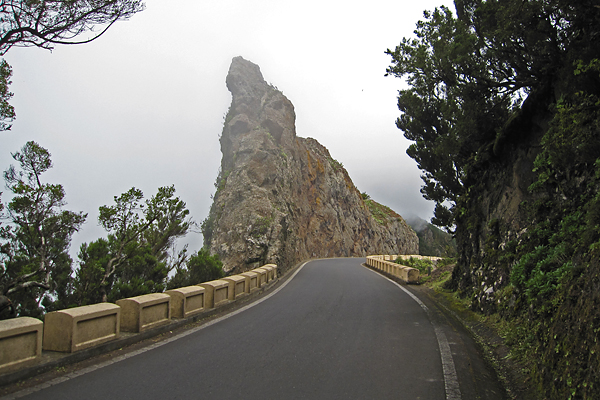 Then after 3.5 kilometers of up and down, the real descent started, with the same smooth asphalt as on the ascent, so it was a pleasure to roll down there. The road is only 1-1.5 lanes wide with more space in the curves, but the traffic is negligible, so it is not a problem. Then going further away from the ridge you leave the clods, and encounter one of the best views of the island. It is really hard to stay concentrated on the road, and still enjoy the scenery around you. 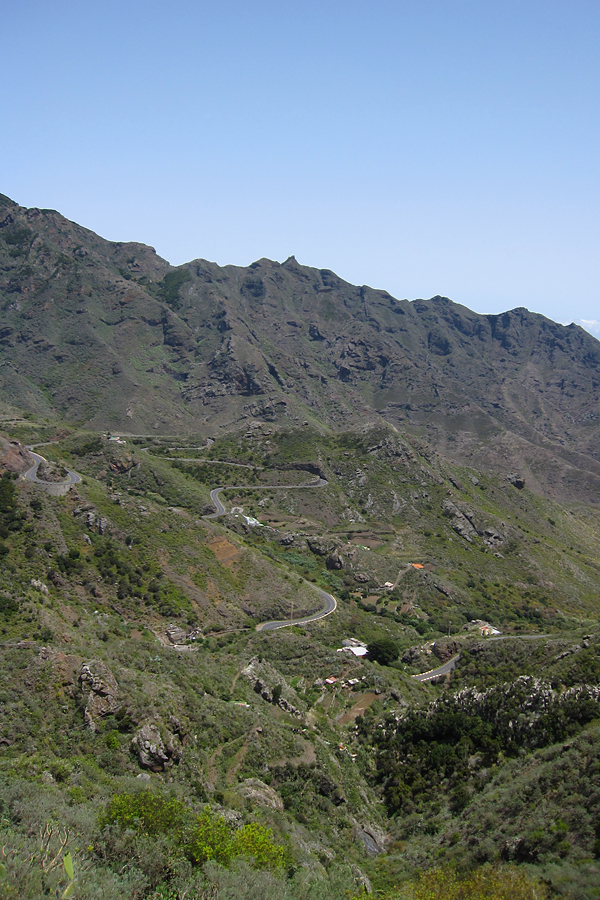 There are so many curves, that there is basically nothing else, but curves for kilometers. I knew I would have to come back up on the same road, so I was not really happy about the massive tailwind at this point, though for the descent, it was really nice after I left the very curvy section behind. At the end I arrived down to San Andrés, and stopped just before reaching sea level (going all the way to the waves would have been a bit tricky, so I did not do that). I refilled my bottles with cold water and enjoyed an ice cold Cola here ;) It was really refreshing (and I am not payed for this)! Then I turned back, and started the second part of the day – riding home the same way I came. This was I immediately started my next climb at 69.15 km:

I saw a mountain biker at approximately a minute or a bit more ahead, so I though I might try to catch him. Unluckily the headwind was really terrible, and I started to feel some pain in my right knee, so I had to slow down a bit – or risk getting an injury… As I did not want to go home in a taxi, I slowed down (and felt the shame for not being able to catch him). I really struggled on this section, the slope was only 6%, but the wind made it much more difficult. 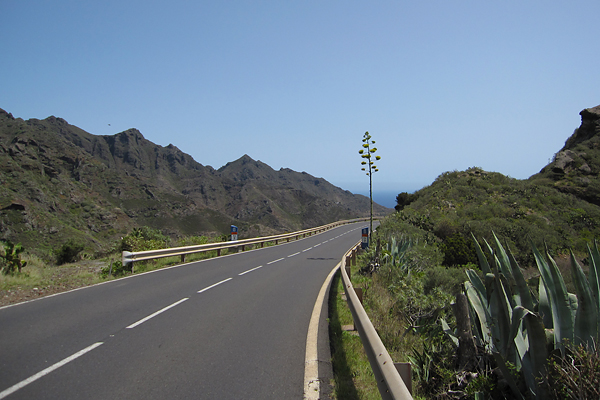 Luckily I got some rest when the road turned around in one of the many switchbacks, but it did not last long, as the main direction was still against the mountain, and the wind was blowing downwards along the slopes. 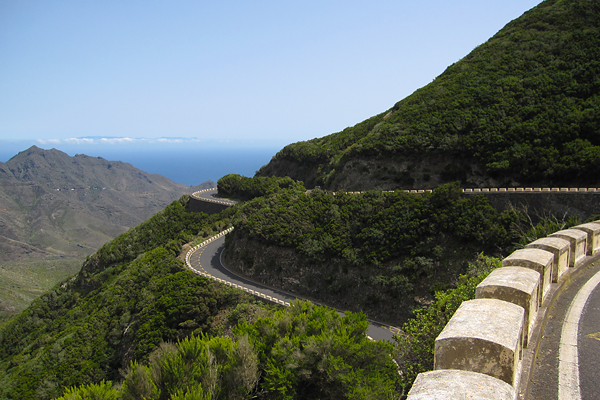 Still, the view was amazing. I have a video from this road, check out the first five minutes here. I even had to stop once before reaching the top, because the wind was blowing just too strong. Then I arrived to the top and entered the cloud layer again. 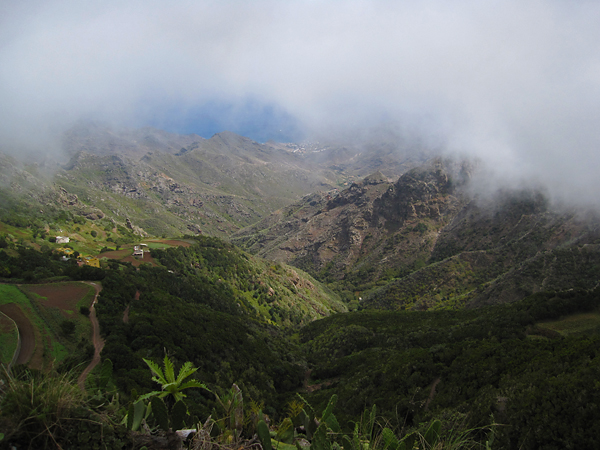 Here, for the 3.5 kilometers between the ‘top’ and the start of the next shorter climb to the real top I had a family driving in front of me, and they were filming me from the back of their car ;) Too bad I will never see that movie… They stopped when the next climb started, so it was again only me and the mountain from 87.11 km:

I felt really weak and slow, and probably both were true. I realized that I did not eat enough during the last hours (only one and a half energy bars for 4 hours of riding!?!), so I stopped and had a bite, bit it did not really help… Luckily the top came quickly, and then I had a long descent down to Tejina… That was good as always, but as soon as the road turned uphill again, I had to take a break. A relatively long one, to eat all I could (energy bar, energy gel, calcium and magnesium – so nothing too delicious, but a lot of energy…). After this I started the next ascent at 106.67 km:

Luckily it was an easy ascent and I started too feel better slowly, as my heart rate finally rose to a zone which was OK for climbing, but I could not stop thinking of a well deserved rest day for the following day. I really wanted to be back at the hotel. Then again, I had a short descent from TF-16 to El Sauzal, only to start the last climb of the day at 117.7 km:

This road brought me over the TF-5 motorway, and then the rest was basically a continuous slight descent, except for two short sections before and in La Orotava. I had to make a last effort to climb up a very steep cobblestoned road just before my hotel (so I felt like in Belgium), but then I was very happy to get off the bike. I felt completely empty. I should have eaten much more in the first four hours, because having 6 categorized climbs is tiring even with proper nutrition… From this post it might seem that I only remember the hard things from this day, but I have to assure you that it was a very beautiful ride, and I am happy that I made it ;) GPS details can be found here.