After the ride of Thursday I had to take a day off (the bike). I walked around for a while in La Orotava (I will post some pictures of the city later), had a pizza for lunch, watched the Vuelta, and did not do anything special. Then on Saturday, I went cycling again. Now I was not in the mood to go and discover unknown roads, so I decided to ride up to the Teide, which I already did from this side last year. It was a very safe choice, because if I had any pain in my knee, I could have just turned back to roll down to my hotel. Of course, to properly climb the Teide (btw, it is not really climbing the Teide itself, because there is no paved road going all the way to the top, but it is cycling up to the highest paved road near the Teide…) first you have to go down to sea level – which means Puerto de la Cruz on this side of the island.

This (where I shot this panorama) is the closest I came to the sea :) I really don’t get the fun in going into the cold ocean, getting salty, and laying on the sand – especially not alone… So I quickly turned around to start the one and only ascent of the day after 8.19 km of descending:

This is a monster climb. It is not steep, except for a short section, but it is extremely long. There are not many climbs longer than this. First you take TF-31 up till the TF-5 motorway, then a small local road up to TF-217 which takes you to La Orotava, where you turn left to TF-21, which will take you all the way up to the base of the Teide. Sounds easy ;) The section on TF-31 is boring, but then the small road (Calle del Risco Caido) is a real killer. A year ago I had to stop twice there. Now I managed to ride up without stops, but it was very difficult, ~700 meters with gradients around 10-14%… Then the gradient stays pretty constant (~6%) for tens of kilometers, so it is just steady spinning for hours. The road climbs through populated areas in the Orotava valley below 1000 meter, then it enters the pine forest. As almost always, I was riding in the cloud layer between 800 and 1200 meters, this was the ‘coldest’ and most humid part of the ride. Then quite suddenly the road emerged from the mist, and thus the climb continued in strong sunshine, so I had a short sunscreening stop ;) 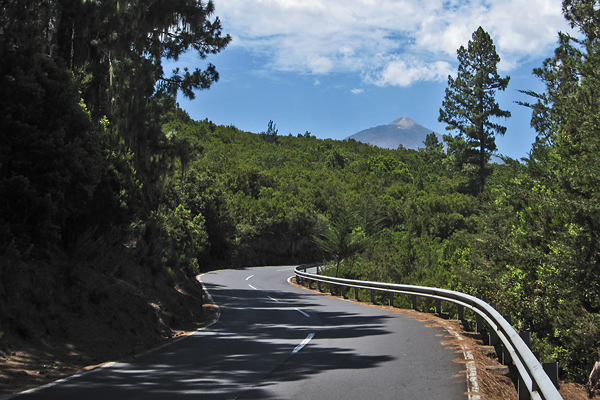 The Teide is visible from several places, luckily the highest point of the road is still one and a half kilometer lower than the peak itself… But it is a nice sight for sure, especially with the ocean of clouds below. 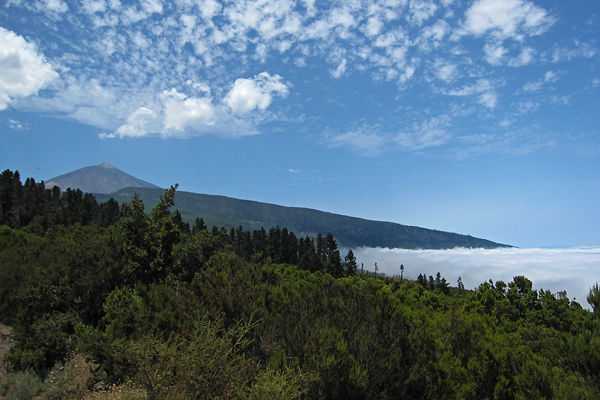 Now I made sure that I eat often and drink enough to avoid the situation I got into on my last ride on Thursday. This worked very well, I felt still quite well when I reached 2000 m ASL. 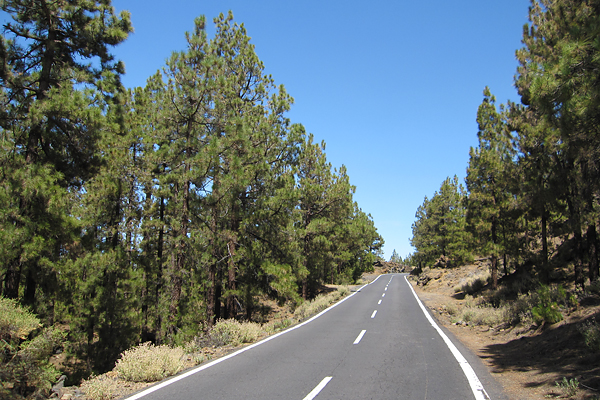 After passing El Portillo – the gate to the caldera – there were no more trees left, only rocks (and some small bushes, I know). And although the air temperature was around 20°C, it felt like 35°C with the strong sunshine and the reflection from the road and the rocks. 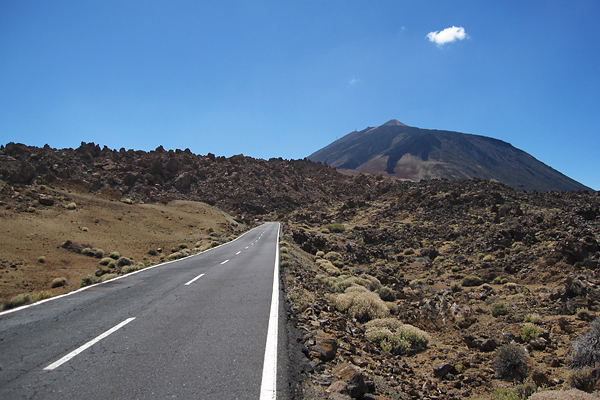 It is a bit like riding on Mars (probably). Then the highest point of the road arrives at the Mirador del Tabonal Negro, which is a pretty hot place on a day like this. I really had to leave after I made the photo below (which process resulted in a scratch on the side of my saddle, as my bike fell…), because I started to feel like being in an owen… 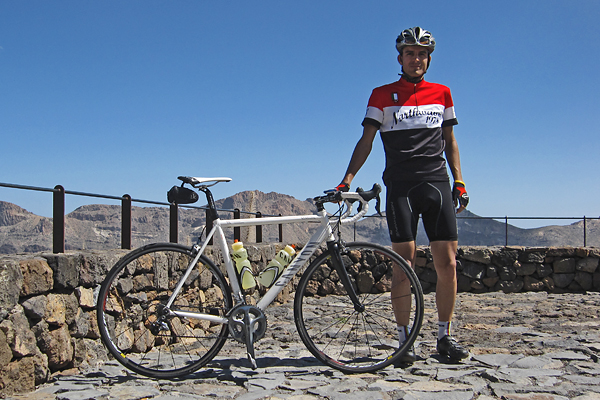 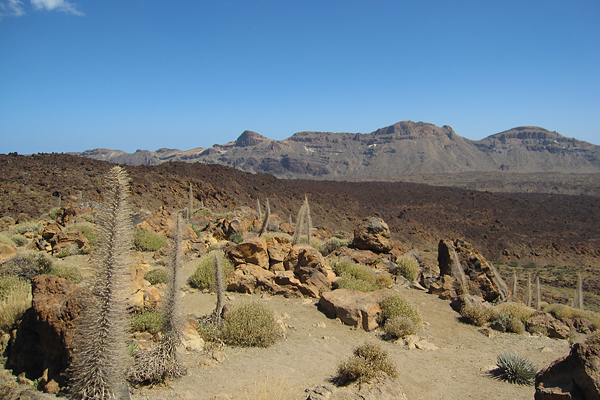 From here I still rode (down and then a short climb up) to the base station of the cable car, to have a short break there in the shadow of the building, before I start my looooong descent back to my hotel. 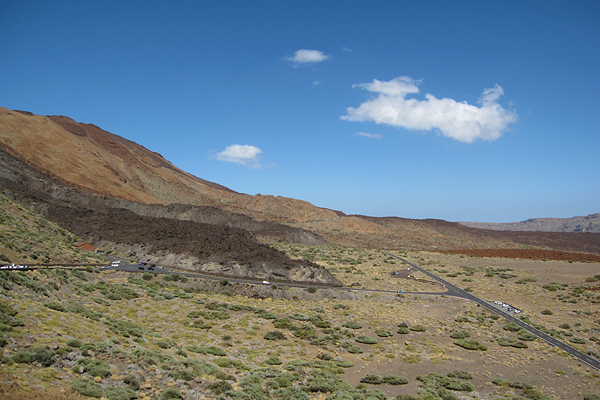 There is also a nice view from there to the many different frozen lava flows of the caldera. Also, it is nice to ride up there, because when you arrive all the tourists stop looking at the Teide, and they start staring at you, with shock and amazement on their faces, trying to imagine how it is possible at all to bike up there :D 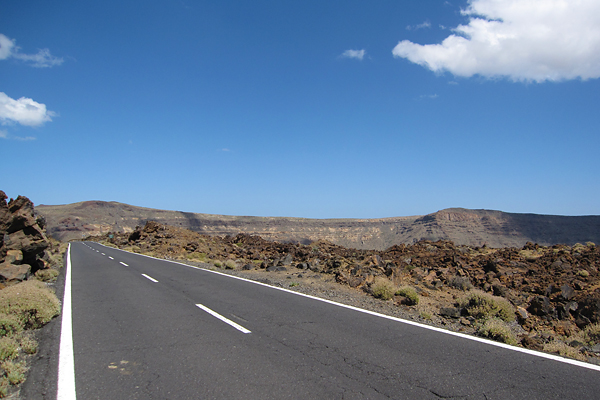 The descent was nice as always, with nothing special happening, except for being stuck behind a couple of slow cars for quite a while, so I had to use my brakes much more often than I usually do… 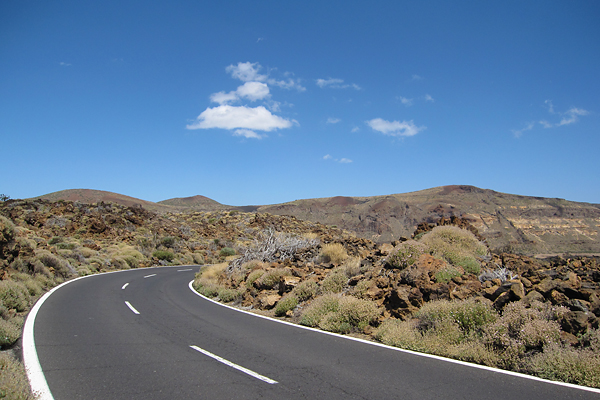 I managed to pass three out of the four cars one by one, and I was just about to pass the last one too, when we entered the cloud layer, but as the visibility was really bad, I decided to stay behind… It is better to have a car driving in front in such conditions, because they need more time to react on curves, so basically they enable you to ‘feel’ a longer stretch of road ahead. And cars have front lights, and I did not have one… I made it back to the hotel with minor fatigue, so I was quite happy with the ride. Still, I took another rest day on the next day :) GPS details can be found here.