After arriving back to Belgium from Chile, first of all I had to make sure that I can handle the group ride I planned for the coming Sunday (besides adjusting back to the Central European time zone, which was actually not so bad: I woke up at 5:30 on the morning, and had to fight falling asleep at around 8 on the evening for a few days only). Since the decision that I would have to plan and guide the Sunday ride of the 25th of May was already made during the first weeks of the year, I had already planned a great, and quite difficult route before I knew that I would need to go to Chile for three weeks just before the ride in question. So after I arrived home, I had only three days to get my s**t together by strictly following what is written in Rule #5.

When I got back on my bike for the first time, that was really weird. During the first pedal strokes my body was saying: “What is this feeling, what is happening?”, then for 2 kilometres it was like “I am so strong, I am totally invincible, I am barely pedalling and look at me, I am flying!”, which somewhere around kilometre 2.01 turned into heavy breathing, a loss of speed, and the realisation that I am totally out of shape. Yep. Three weeks without any activity (more intense than walking a little bit here and there) had a huge effect on my physical condition. And not a positive one. Anyway, I biked to Mechelen and back (60 km), then on the next day I did a reconnaissance of the ride planned for Sunday, but before arriving to the real climbs, I suddenly felt so tired, that I had to skip the most difficult kilometres. I arrived home dead tired with only 80 km in my legs… Luckily an easy Saturday gave me enough rest, and on Sunday morning I actually felt surprisingly good before the ride. It was a real success, with beautiful sunny weather and lots of participants (~16), despite the elections being held on the same day. You can see the elevation profile of the ride below, with the more significant climbs (summing up to a total elevation gain of ~1000 m) marked.

Although the ride was ‘only’ ~100 km, I did an extra 30 km along the channel towards Mechelen, which meant that I arrived home (again) dead tired… But this extra effort was necessary, as I had a very special entry for the following Sunday in my calendar: Leuven – Knokke – Leuven, a ride spanning over more than 300 kilometres – something I could not participate in last year because I was abroad on a conference somewhere. I have to admit that when back on Friday I had to skip parts of the reconnaissance ride and go home with only 80 kilometres, I was doubting a little bit if I am really in a shape good enough for such an epic day. And with that thought, we arrive to the title of this post.

So here is deal: if you have the fitness level to bike 100 km, you can (in most of the cases) also do 300 km (and even more). Beyond one point, it is not about the physical condition anymore, but the mental approach. The way you prepare psychologically is as important as the kilometres you spend training week-by-week on the road or the trainer. And remember, your mind is your ally but also your worst enemy. Thoughts like ‘what if I can not make it’ should be left home, buried deep in a drawer, because should you encounter them in the saddle, they will break you faster than a long stretch of cobbles would. I think it is important to think about the route (days) before the ride itself, to simply get your mind used to the idea that you will ride 10 hours or 300 kilometres the next day. I find that it is this approach what really makes a huge difference. This also explains why it is much easier to go for a 150 km ride than to go for 100 km, then continue for another extra 50 which was not planned in advance. 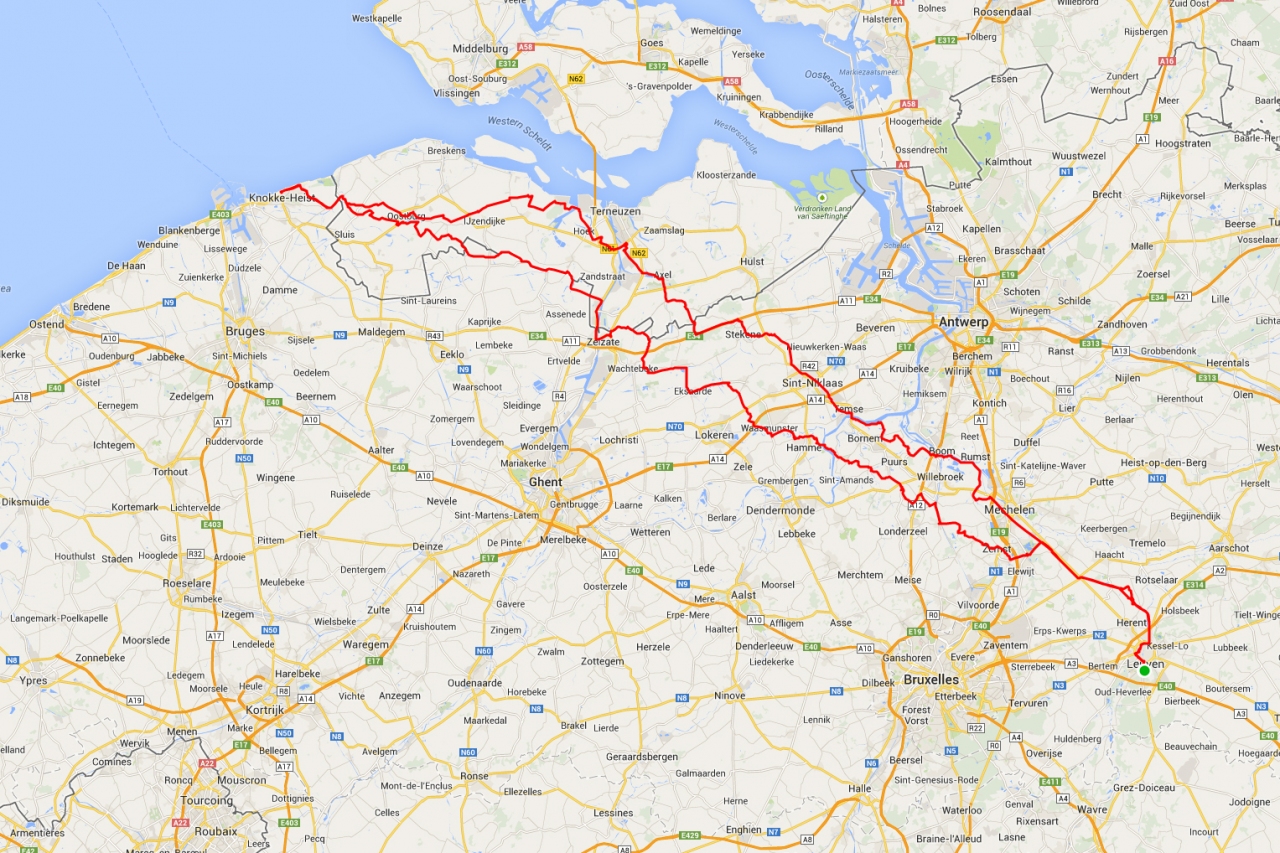 And to say something about the ride to Knokke and back: I really enjoyed it, and both the 10.5 hours in the saddle and the distance of 312 kilometres are new personal records for me. We were lucky with the weather, not too cold, not too warm, not too much wind, and not too much sun – ideal. Also, riding with a big group meant that I could save a lot of energy by staying inside the peloton, rolling along at 30 km/h without any effort. I admit that it is not really nice that I did not spend much time in front, but after not biking for three weeks, I just wanted to make sure I survive the day… This resulted in an average heart rate of 133 bpm, which is pretty much the lowest average I ever had on a group ride… It was a really beautiful day on the bike :)

Although right after the ride I felt more or less perfectly fine, the coming days brought some discomfort, meaning that even if I stuffed myself full with food, I felt hungry, but if I ate more, I just felt sick… When this feeling went away I was happy to get back on the bike again.