In November I finally visited my brother in Dubai (he is a steward at Emirates already for more than three years), making use of the cheap tickets he can get his family members. Since these are standby tickets there was a bit of uncertainty on the way there, as the plane was almost fully booked, and I only got a seat when I was already at the gate. We left Brussels behind at 20:15 and – after passing a few time zones and not being able to sleep more than a half hour – landed around 5:40 in Dubai… This raised the difficulty level for the following sightseeing considerably, but I guess I am not really allowed to complain. During the next 54 hours we saw a lot (plus ate a lot, and took a few dozen taxis). On the first day we started by taking one of the small boats across the Dubai Creek, then walked through the still closed Bur Dubai Souk Market (my brother did not calculate in to his plans that we would be here around seven in the morning…) and an old-looking (but reconstructed) part of the city, then had breakfast at the Arabian Tea House (very good tea with milk, and delicious thin breads with honey, nuts, and humus). A short taxi ride took us to the La Mer area (a new beach and promenade with bars and restaurants, etc., and burning sunshine), then another one to the Souk Madinat Jumeirah, which is a mix between a traditional market and a more modern mall. From here there were also some views towards the famous Burj Al Arab Jumeirah hotel (the one shaped like a big sail over the sea) – but there was no way to get much closer without being filthy rich… 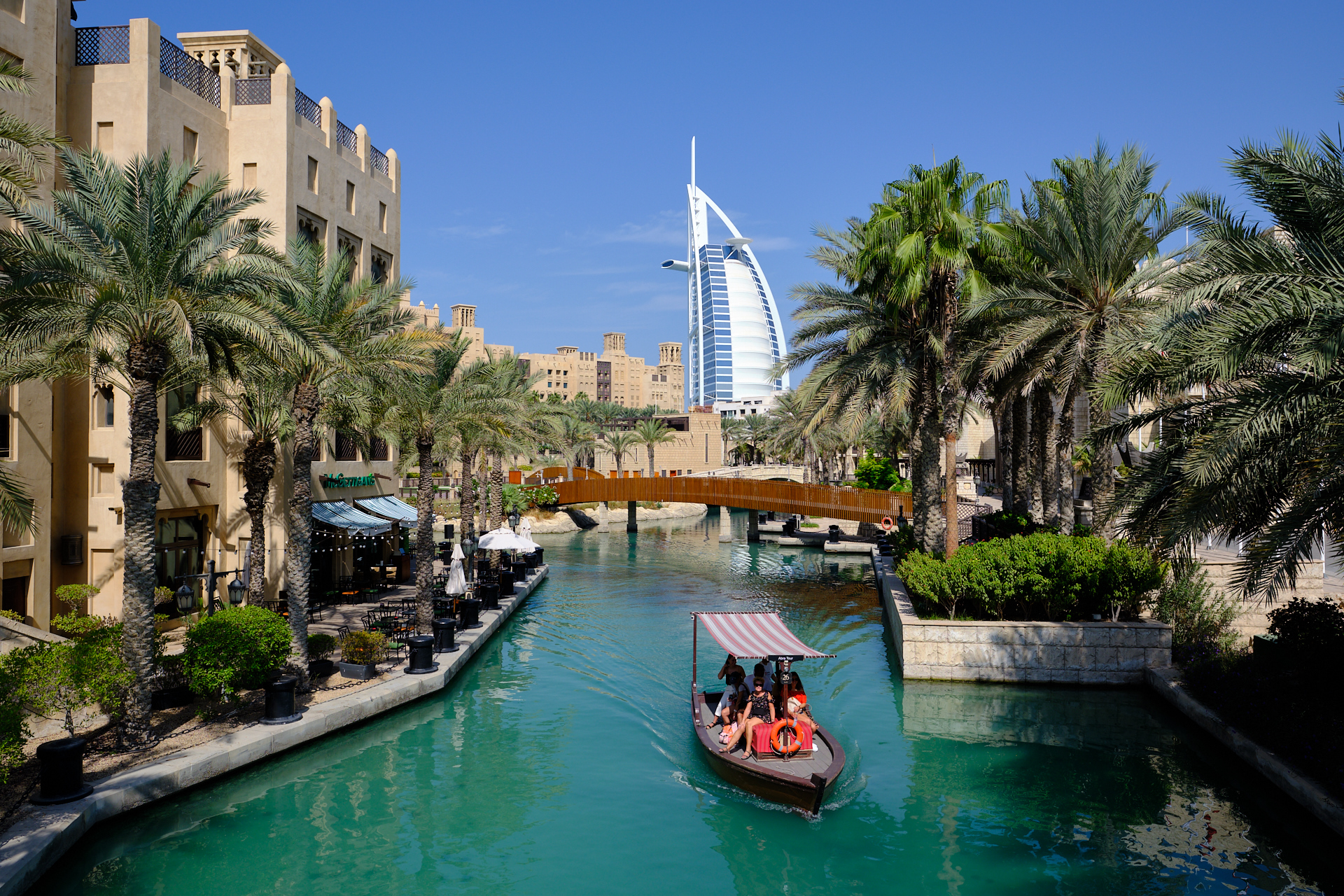 In general this was a nice area for photography, with more classical looking buildings instead of the typical skyscrapers that made the skyline of Dubai so famous. Our next five minute taxi ride took us to the Mall of the Emirates, not the largest shopping centre, but the one that looked the most fancy to me (with shops of all the luxury brands and shiny materials covering the floors and walls everywhere, plus trees inside the Apple Store, etc.). We came here mostly to cool down (as in the meantime the temperature reached – a very normal – 30°C) and not to shop, but it was impressive nevertheless. On the taxi ride back to my brother’s place we drove along the main road (a 10-12 lane wide highway), passing by more skyscrapers than you could imagine, and for the first time we got a clear view towards the tallest building of the world. After a small nap, we went to Downtown Dubai – the area around the Burj Khalifa. 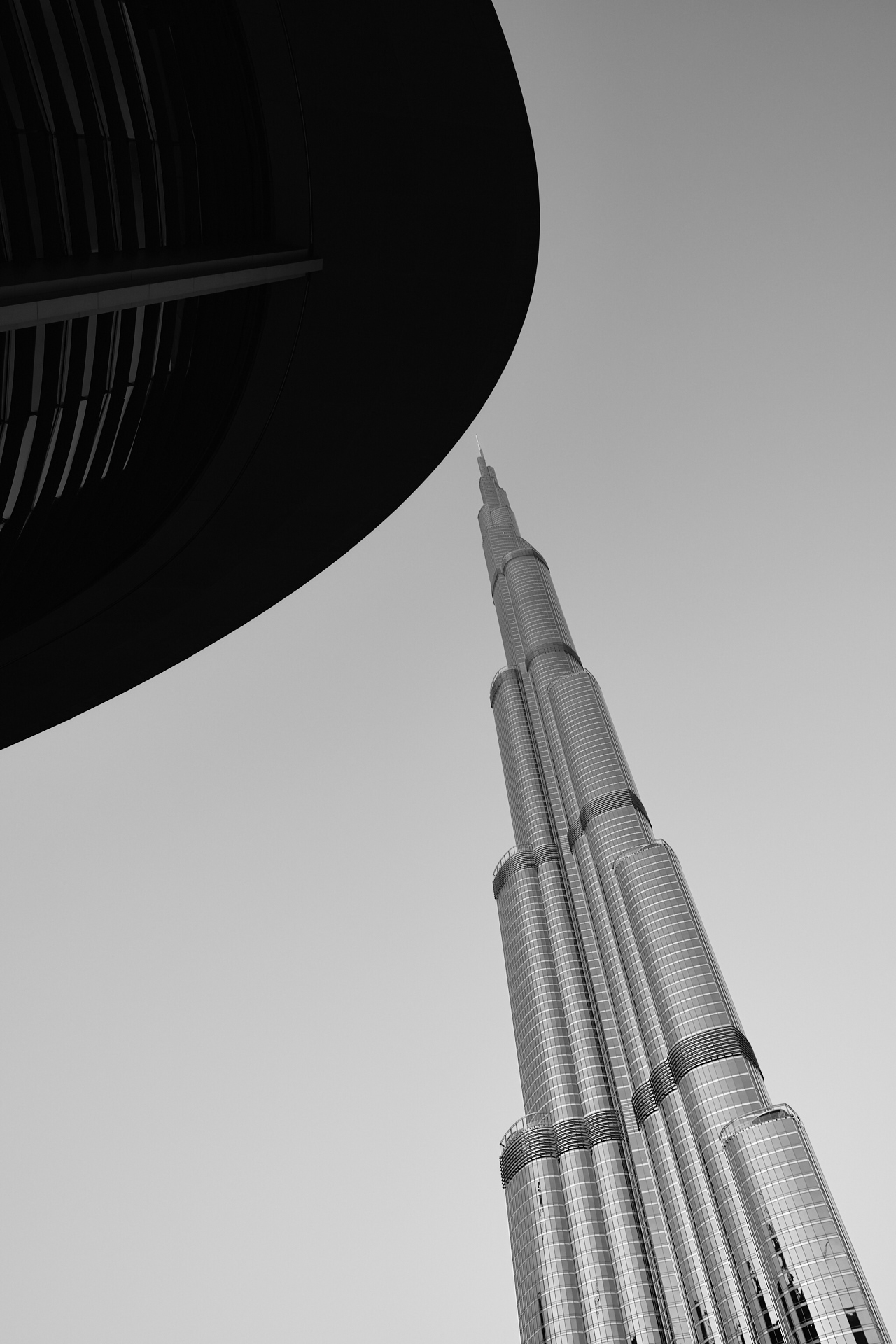 We had Asian food for dinner after taking pictures while walking from the Burj Plaza to the new Opera, then we watched the fountain and light show (with probably another ten thousand bystanders). I knew it would be impressive, but it was twice as grand as expected; I got goosebumps multiple times, and I am not very easily amazed in general. Before going to sleep we still played a bit on the Playstation. 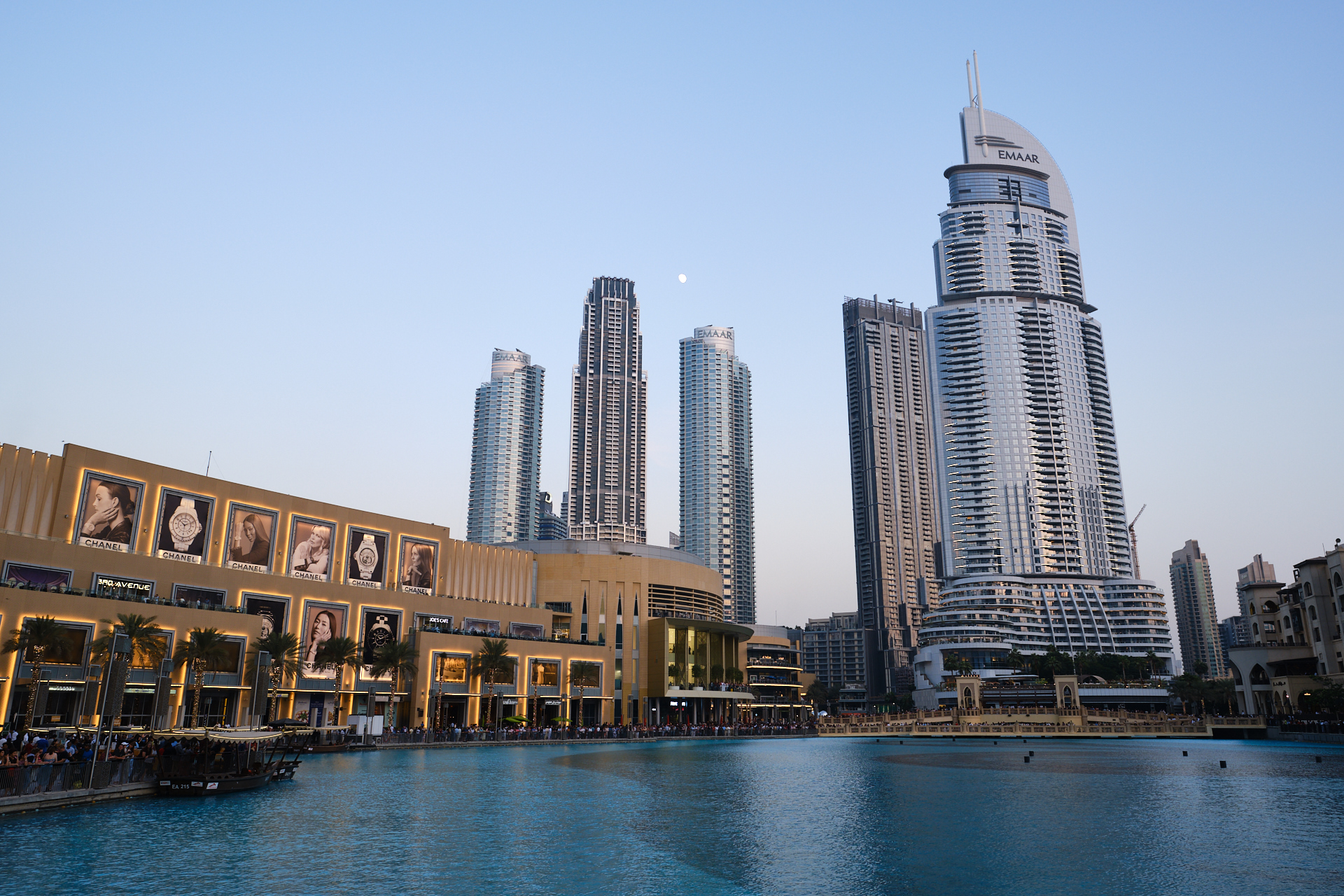 On the next morning we started the day with renting a car from the local car-sharing fleet, and driving across the city. After a quick sandwich from the supermarket (in a very European looking area of the city), we took an early speedboat tour across the Dubai Marina. They took us up to the top of the famous Palm Jumeirah, turning back towards the harbour in front of the Atlantis (hotel). The high-speed section of the tour was quite cool, but to me the most impressive sight from the water was the massive silhouette of the under construction The Royal Atlantis Resort & Residences from the entrance of the marina – it looked like a futuristic construction project hidden slightly in the haze, maybe a space station (or the machine from Contact), from a big budget Hollywood movie. Afterwards we had lunch at The Acai Spot, and a drink on the top of the Marriott Hotel (for the panorama to the palm and the skydivers). Then we (with my brother at the wheel) drove to Abu Dhabi, to visit the Sheikh Zayed Grand Mosque. It is an amazing building, really great for photography – if you like architecture. Luckily the large open courtyard in the middle is closed off from visitors, which makes it easy to take photos without all the tourists in the frame. 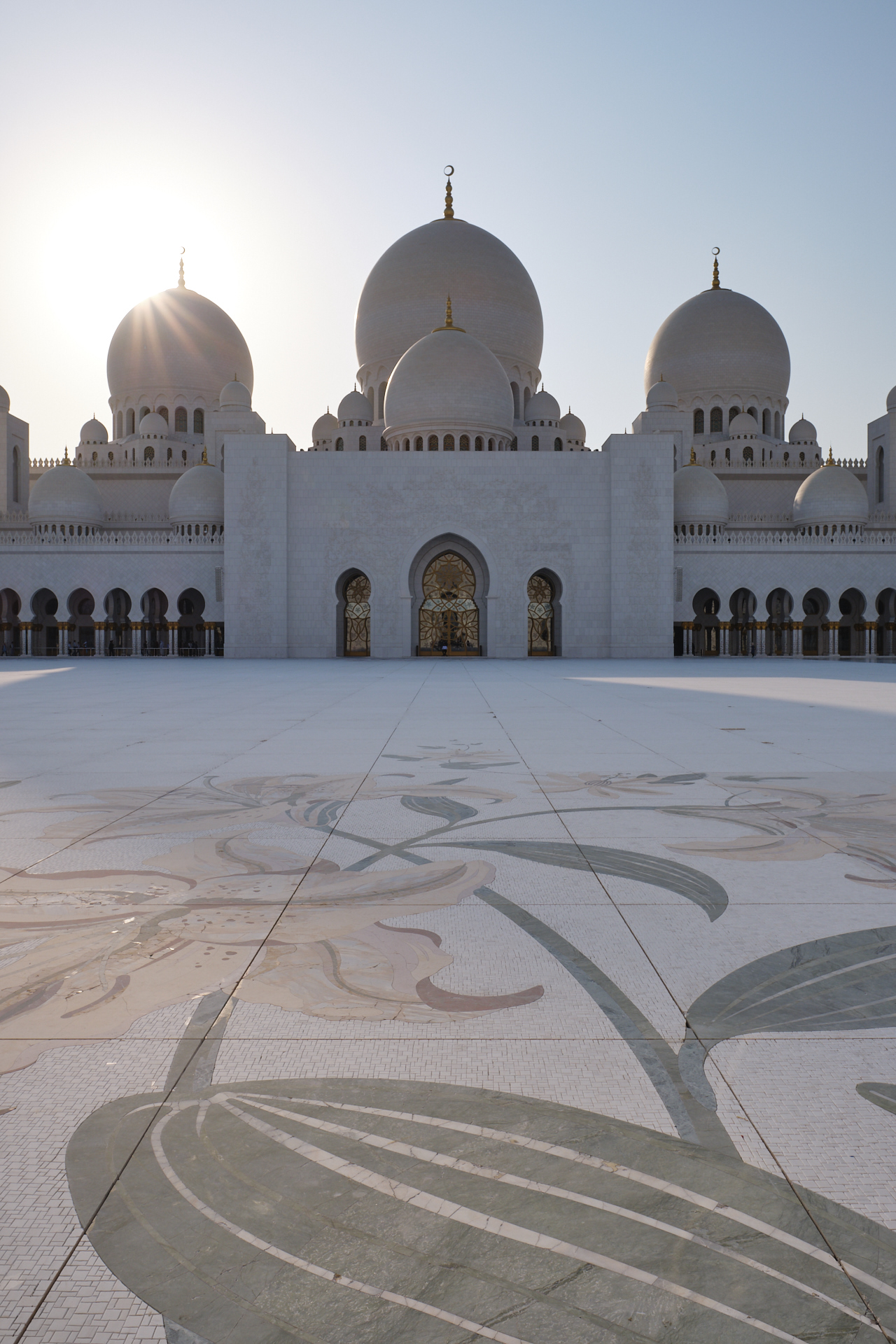 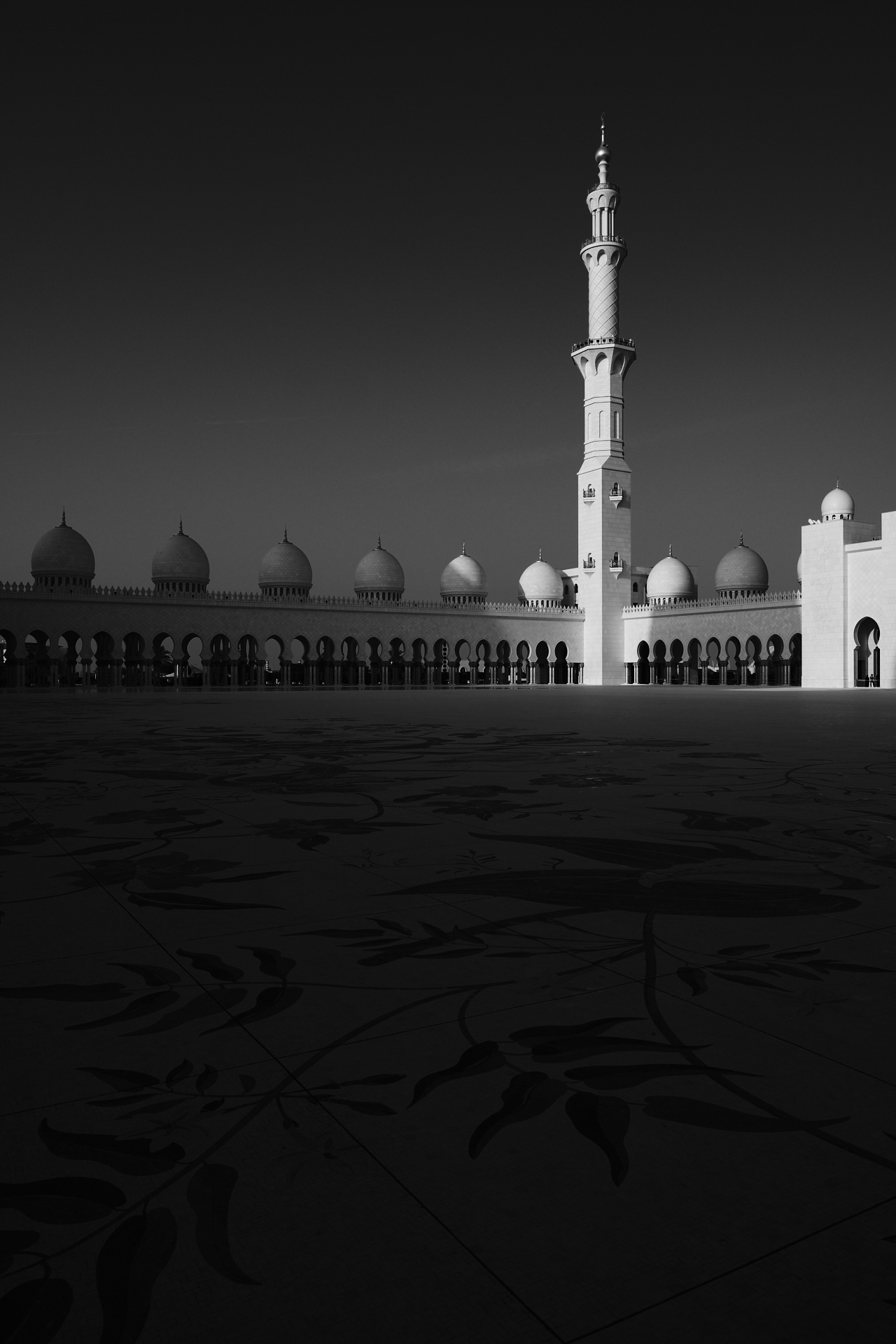 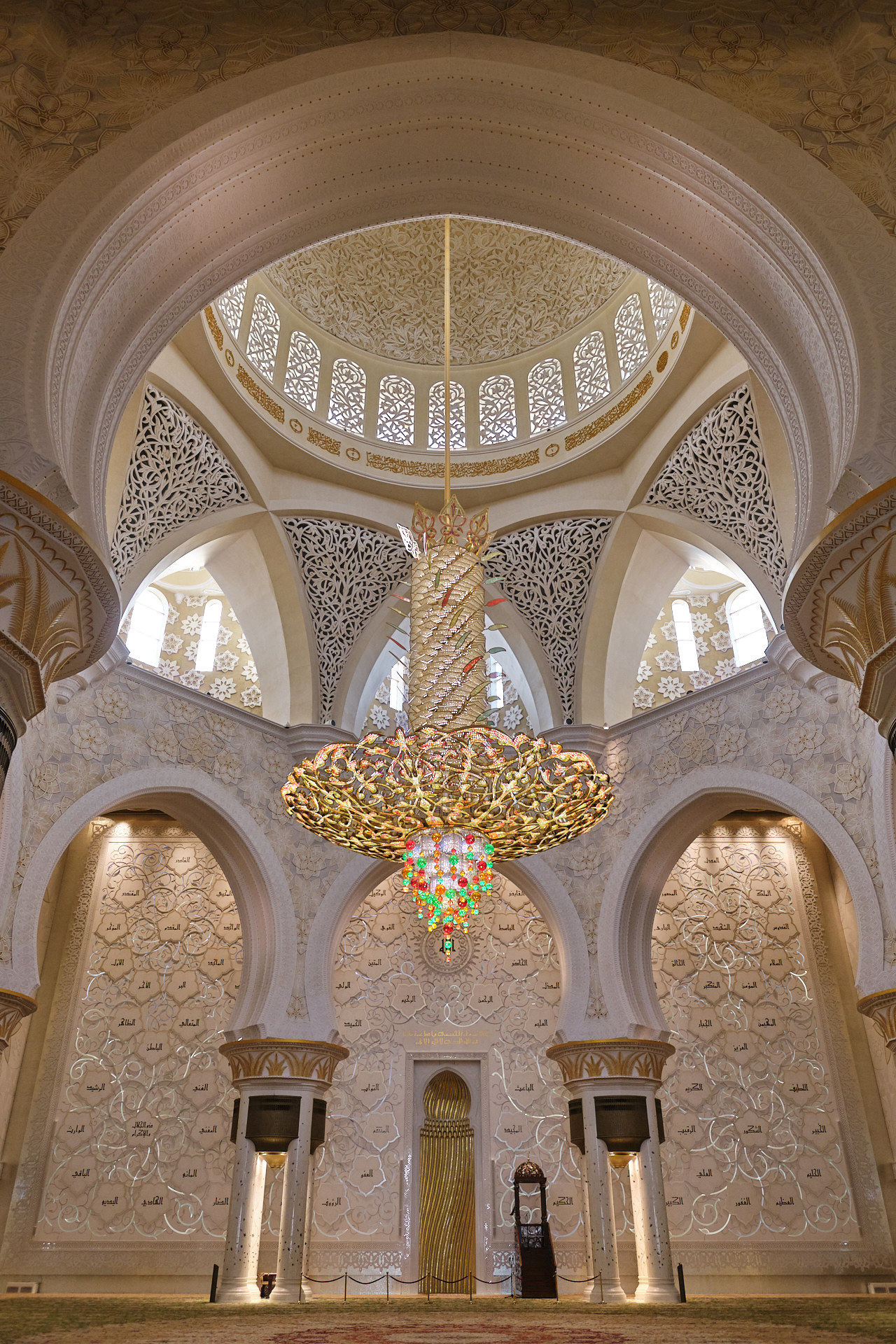 We stayed here almost until sunset, before driving back to Dubai (which was not without a bit of excitement as we could only refuel the car for free in Dubai and not in Abu Dhabi, and the border between the two emirates was quite close to the limit of our remaining driving range – but we made it). For dinner we went to the Festival City Mall, but we were both pretty tired, so we did not stay too long afterwards…

The last morning was relatively cold (in the low twenties) and cloudy, which made wearing long trousers much more bearable (I had shorts for the previous days – except for the mosque -, but they would have been too cold for the plane, and especially for getting home in Belgium…). We had breakfast in The Sum of Us (a very European coffee/bagel/etc. place), then we took the metro to the Emirates Group Headquarters to have a quick look at the planes from the terrace, before dropping me off at the airport itself. While waiting at the gate, a thunderstorm flooded the aprons temporarily, causing slight delays. On the flight home I watched three movies then the first half of Liverpool beating Manchester City (live TV on the plane is definitely something I had not experienced before). Of course I got a cold from the strong air-conditioning, but overall it was a really nice trip, I am glad I finally managed to do it.

Between Christmas and New Year I spent a few days in Budapest (with Clio, but staying not only with my parents, but my brother and grandmother too), where I ate way too many cakes and cookies, following the well established Hungarian holiday season tradition of “gaining a few kilograms at your parents’ place”. The new raspberry flavoured kürtőskalács definitely got my seal of approval. 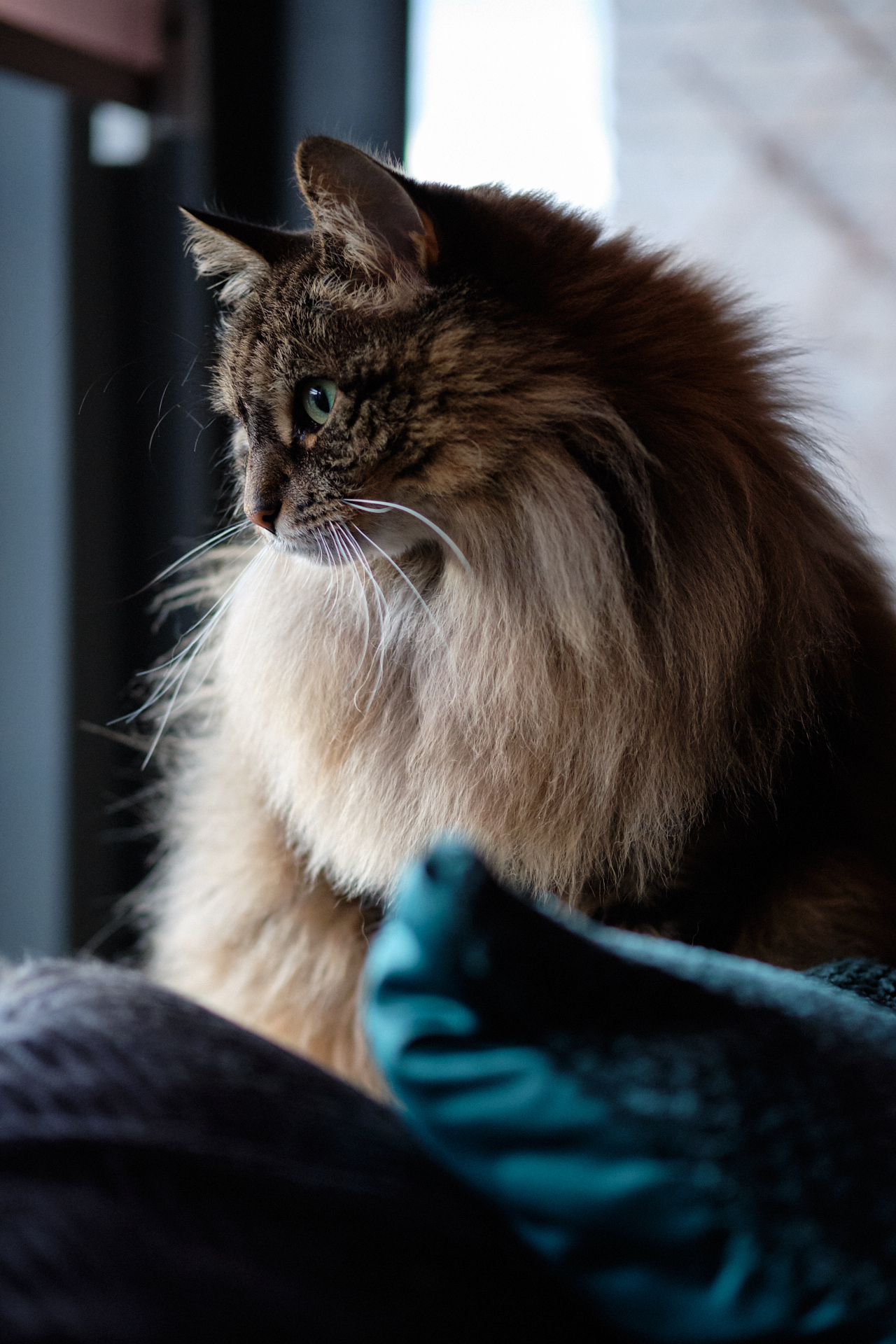 Finally, it is worth a mention that Filou has been with us for two years now, and I still think that adopting him (an adult cat) was a great decision, and I love how he comes to lie against me on the couch every evening, putting his head into my palm and purring. He became much more vocal (and clingy) in the second year, now he dares to speak out if he wants something, which is usually me sitting in the couch with him (when I come home from work, and later in the evening should I be somewhere else in the apartment). He is still not a hero, a new box or the garbage bag still makes him suspicion/afraid, but he is still very well behaved, he has not destroyed anything, he does not go to places where he is not allowed (countertop, table, Christmas tree), and he listens to us in general. He is still very lazy, and even when he wants to play, he is sometimes lazy to actually do so – so I end up moving more while trying to make him active than he does. Of course there is cat fur everywhere, but you accept that when deciding on having a cat, so we use the Dyson on a daily (hourly) basis. He is the cutest ball of fluff for sure.