On Saturday I again took the day off, just watching the Giro d’Italia, and eating :) Somehow I could also enjoy these rest days, just by really not doing anything. Though these days were a little bit lonely… Anyway, for Sunday I planned an easier ride to finish nicely my cycling holidays on La Palma. Of course when I say easier it is very relative. Because indeed, easier than biking up twice to the Roque de los Muchachos, but compared to that, everything might seem easy. But keep reading, and you will see what I am talking about ;) After getting up at 9:30, I only managed to leave a bit before twelve – partly because it was raining, partly because it was so good to just lay down in the couch :D First, I had the same short climb as on Day 1:

Though I felt like making a good effort, I was a bit slower than on the first day. But I guess it is ok after such a week on the bike. Then after a short near flat section, the big climb (up to El Pilar on LP-203, though I think the road numbering is not the same in real life anymore) of the day started at km 10.41:

I was not avare of the fact that it will be this hard. I though it would be a 1st category climb, with a much less steep gradient, so I was a bit surprised when I had to face reality. But it was a world class ascent. The worst part was between km 7 and 12 with the following gradients (over 1 km): 9.5, 10.8, 9.3, 9.0 and 10.1 percent. And to make things worse, as I entered the cloud layer around the elevation of approximately 800 meters (so around the beginning of the really steep part), the visibility dropped to 100 meters, and the temperature to 11°C. 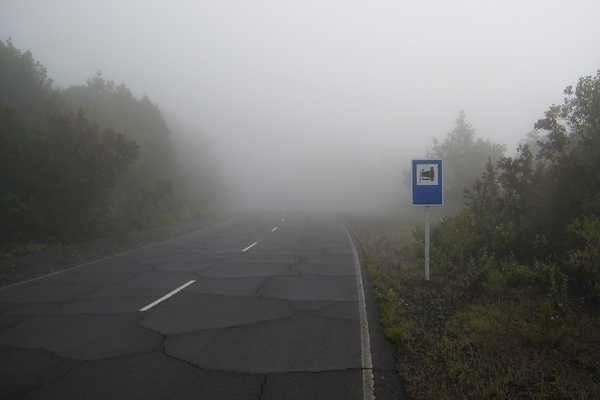 At the end of the steep section I have passed another cyclist (who was way older, so not because I would climb like Contador – at least I don’t feel the effect of the Spanish ham too much :D), with whom I had a short chat when he also arrived to the top. It turned out, that he works at the TNG, so it was a day of astronomers on bike ;) He also took a picture of me on the ‘summit’. 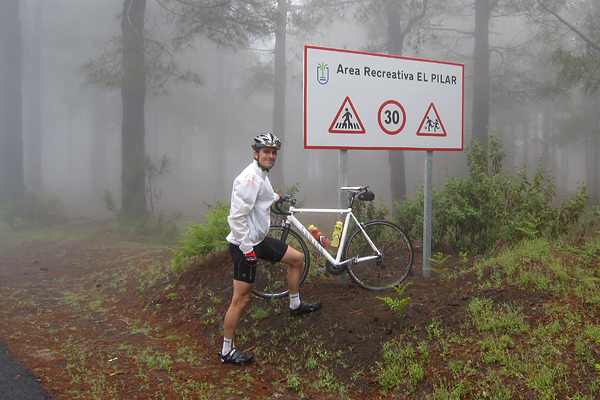 It was cold, in the middle of a pine tree forest, with water everywhere. Clearly 100% humidity. So I put on all my warm clothes for the descent (buying that rain jacket was a huge life-saving idea of mine when I ordered some bike stuff on-line the last time), and started rolling down. I could not see anything from the cloud, the visibility was around 50 meters. I had to put on my flashing red rear lights, though cars could not go faster either… And I was freezing like hell (oxymoron warning here). So from almost 1500 meter ASL I went down to almost 800 m ASL, where I turned right onto LP-202 (again, I believe this is not the real designation anymore, but this is written on my map), to climb up to La Cumbrecita:

At the beginning of the road a sign said that the path to the caldera is closed, but I kept going. Luckily when I reached the entrance of the national park, the lady at the barrier said that I can go in (and by the time I was coming back, the barriers were even open). This was the smoothest stretch of road which I have climbed this week, perfect asphalt, though only one and a half lane wide. Perfectly enough for me ;) 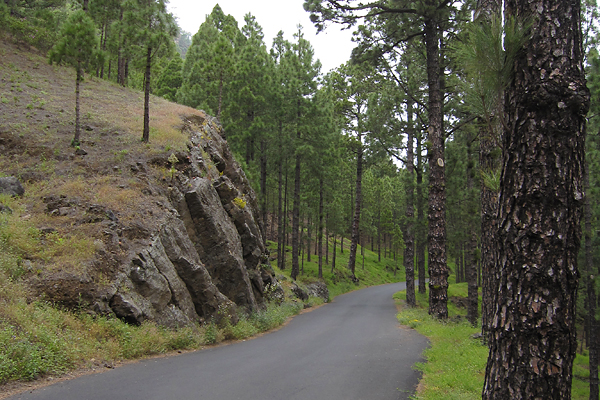 At the beginning the road was quite straight, climbing higher and higher on the left side of the valley among the so often seen pine trees of the island. A system of tubes carried down the freshwater from higher parts of the natural reserve along the road, and they were leaking here and there, but because of the tremendously high pressure, these leaks appeared as fountains of several meters high ;) The steepest one kilometer had a gradient of 11%, and that was the point where the road got very curvy. 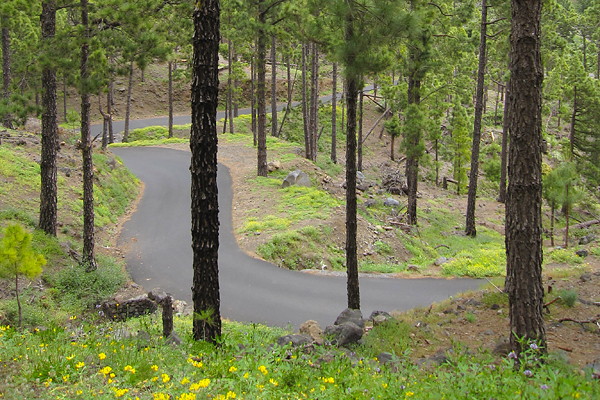 Unluckily the top was again in the cloud layer, so instead of the amazing view to the inside of the caldera I saw a grey wall and nothing else beyond :( 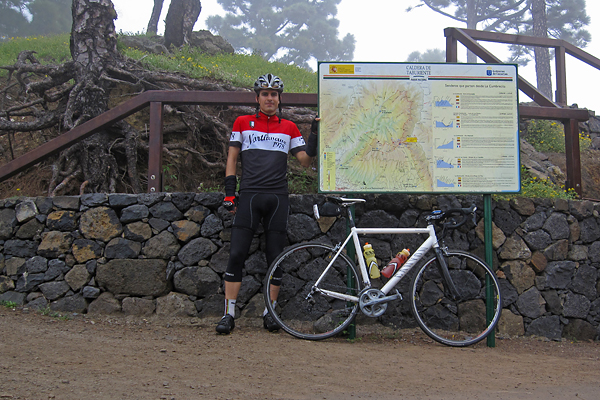 But it was a very nice climb, so it was worth going up. And the downhill was also very nice on the smooth and quite straight road ;) Then already after leaving the pine tree forest and the national park behind, I had a short period of sunshine when I could look back towards the caldera, but that’s the most I have seen that day. 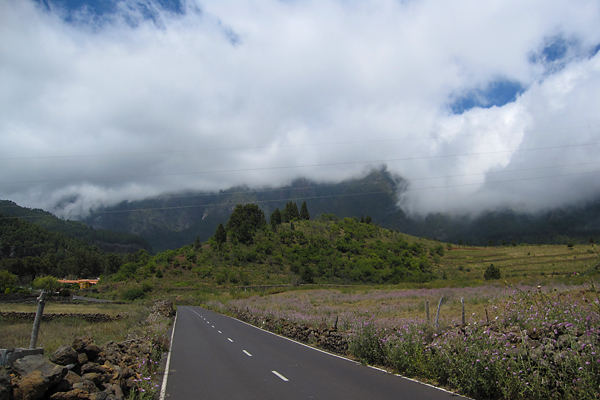 From here, I still had to climb back to El Pilar, up into the cold clouds, and now even facing the chilly and strong headwind. But it was the last climb.

Luckily this side of the mountain was much easier, though the wind and cold made it a bit miserable. Also the road quality here was a bit below European standards. Unluckily I could not see too much of the numerous volcanic calderas which I have passed here, because all what I could make out was the grey slopes right next to me, but the rest was lost in the mist. I have to admit the situation had a special atmosphere, because the moving (more and less dense) clouds created the illusion of volcanic smoke. Again, on the top it was not more than 11°C, so the descent was freaking cold. And because of the low visibility (50-100 meters all the way down till 750 m ASL) and the wet and steep road, I had to be very careful and break a lot. I did not enjoy it that much… But as soon as I came out of the cloud layer, it was a nice roll all the way to Santa Cruz (where I even had a bit of sunshine to close the day in a sunny mood).

So I finished my last day on La Palma with 82.8 km and 2645 meters of elevation gain (and a pizza of course, as every day this week :D). Yeah, ‘easy day’ :D GPS details here. Luckily I specifically asked for a later connection in Madrid knowing that it is impossible to make it with IBERIA if you only have 55 minutes of transfer time, because now I am sitting in the airport of Tenerife, and we already have a delay of one hour… Yeah IBERIA, damn it!

Thanks for reading, this was the last part :)