After finishing my PPL training, I just had to wait 3 weeks for my licence to arrive, and then – slightly unexpectedly – another 3 weeks for my radio licence (BIPT – Restricted radiotelephone operator’s certificate for aircraft stations) to be ready, I could finally book my first flight as a private pilot.

Originally I was thinking about going to Spa or even Breda, but at the end my time slot had to be cut down to two hours as a result of a forced reschedule, because one of our other planes did not get its parts for maintenance in time. So at the end I decided to just do a local flight around the CTRs of Charleroi and Chièvres, and visit some sights on the way, aiming to arrive back around sunset. The flight went perfectly fine, the conditions were nice and smooth, the lights were beautiful, the landing was good, and in general I was just very happy to be finally able to fly on my own, without having to do anything extra for it (like get signed off by an instructor). If you look at the video you will see that while now I use SkyDemon exclusively for navigation and planning (although I had a paper map as backup, I did not prepare the navigation on it anymore), I still had a printout of the navigation log (from SkyDemon) and I still crosschecked the printout with the actual data, and did, e.g., the well learned HAT flow before every turn.

After the success of the previous flight, now I really wanted to go to Spa next (since I still have not made a full stop landing here on my own), but luckily I still checked the NOTAMs in the morning, because the airport got limited to home-based aircraft for a few days in the last minute (for reasons unknown to me). No problem, since I had a backup plan: going international!

My alternate for the day was Breda in the Netherlands, but this meant that I had to submit flight plans too. I wanted to experiment with this directly from SkyDemon, so I did it like this: I did the planning as usual (I have the exact Sonaca 200 profiles in SkyDemon), saved and printed my navigation logs, then I removed the extra intermediate points (to not have too many coordinate waypoints in the to-be-submitted flight plan, keeping only the main turning points like the VOR of AFI), then filed the flight plans for both legs from SkyDemon. For the second leg that was addressed to the Dutch I got an acknowledgement via SkyDemon itself (via an e-mail), for the first I called Brussels an hour later to make sure it was well received there too. (It was.) EBCI Tower activated my flight plan upon departure (without needing any specific request from my side), and it was closed by the person in the Tower at Breda when I came in to pay my landing fee and I asked it to be closed. I also asked him if he could see my second flight plan in the system, and to please open it upon my departure. Finally after landing back at EBCI I called Brussels to make sure the second flight plan was closed. (In theory at some places you can also just close the flight plan from inside SkyDemon, but it was not an option at these airports.)

Other than having to deal with flight plans for the first time in more than a year, the flight was very straightforward. Thanks to a closed EBAW I could fly through the (former) CTR area of Antwerp without contacting anybody (of course I was on Brussels Information as always), and I had no issues navigating the circuit at Breda as a newcomer either (albeit my approach path was a bit shallower than 3 degrees, so there is always something to improve). On the way back I flew over the Schelde Delta, which definitely made the otherwise flat scenery much more interesting. I landed back at EBCI just a few minutes before sunset, and I finally managed to see the lit approach and runway lights too.

As promised at the end of the previous flight, this time I really wanted to take a passenger with me, and who could have been a better candidate than the pilot who took me flying first before I started my PPL. Back then Olivier flew me from Grimbergen to Brasschaat and back, and on the way – especially on the return leg – I also got to take the controls of the C172 for some time for some straight and level flying, and some easy turns (to which I prepared by flying the same plane in X-Plane 11 for more than 50 hours over the summer). It was only logical to take the same destination airfield for this flight too, especially since I have not been to EBBT before with the Sonaca 200.

My main goal with this video was the documentation of a relatively detailed passenger briefing, which is shown basically uncut over the first minutes. I think it went very well for a first attempt. Then it is the usual flying followed by a relatively detailed arrival to EBBT, to illustrate how busy the circuit area was (gliders, a tow plane, a solo student, and various pilots joining and leaving the circuit – with only air-to-air communication and no AFIS present) on this sunny Sunday afternoon. The return flight is not shown in that much detail (except for some nice views of Antwerp while crossing the still inactive CTR, and a few shots of the slightly unusual arrival at EBCI), since it was quite similar to my return from Breda, plus my main GoPro decided to stop recording before take-off (probably something to do with me not closing the GoPro app on my phone after setting the field of view in there).

It was a fun flight, I will definitely try to fly with other pilots (and friends) often in the future, it is nice to share this experience with others. On a technical note, thanks to the purchase of a 3rd GoPro I don’t have to move my secondary camera around anymore in the cockpit during the flight, which is a welcome improvement both in terms of production quality and flight safety. Now if I could get an external camera too that would be awesome, but this will not happen as long as I am flying with the school’s planes. (If anybody wants to sponsor me with a plane, you know where to reach me.)

The end of October has provided some excellent weather this past year (climate change has positive aspects too), so I booked a longer slot for flying this time. I originally considered going to Koblenz, but then the weather models predicted lower cloud base over the Eifel area, and I did not feel comfortable dealing with that at this point in my pilot journey yet, so I decided to fly to Keiheuvel instead. Since it meant a significantly shorter flight, at least I had some time to take a proper break at my destination this time, and enjoy the warm weather on the terrace while having a late lunch.

I was a bit stressed on the way there, because I did not manage to contact the airfield in the morning while PPR is required (nobody picked up the phone at the AD office), so I felt like I was flying a bit into the unknown. In any case, I actually had no real reason to worry, since I managed to talk to the AD manager at least on the phone, who very kindly and helpfully told me that he sees no reason why the AD would not be open, and suggested to just fly overhead and have a look at the signal area if nobody is on the radio when I arrive, plus of course I studied the circuit and the procedures before the flight too as usual.

When I arrived at Keiheuvel there was indeed nobody on the frequency, so I did my first ever solo overhead pass to check the signal square, and then joined the circuit while making blind calls. This part is covered in detail in the video. The landing went very well, it was definitely my nicest soft field landing to date, and I was very happy about it. After passing by the deserted AD office to pay my 5 EUR landing fee in an envelope and register my flight, I had a grilled sandwich on the terrace. There was more activity after I arrived, with at least a couple of different planes coming and going, and somebody doing touch and go training – they were also on the frequency when I departed.

Since I had a lot of time, I flew via Ghent on the way back to Charleroi, to check out a part of the country where I have not yet been to with the plane before. The view was magnificent thanks to sun rays breaking through the cloud layer (and the foliage turning to autumn colours below), so I had a very nice time overall. A few days after the flight I have digitalised my logbook (using FlyLog.io as a backup, and for easier statistics), and my flight totals after this flight were 70:36 (26:42 as PIC) with a total of 149 landings (55 as PIC).

I booked my following flight very last minute, and decided to not take any GoPro cameras with me this time, so I could just enjoy the views without having to work on a video afterwards. Given how beautiful the flight was I am a tiny bit regretting this choice, but I have a few nice photos and a lot of nice memories nevertheless. I took another fresh pilot with me as a passenger, and we had a nice chat. This flight took place on the 12th of December just in the middle of a very cold period, so I decided to go for a sightseeing loop turning around above the highest point of Belgium to check out the winter wonderland of the Ardennes. On the way back we flew along (and above) the edge of the low fog layer, providing some special views and my first time flying above the cloud layer. 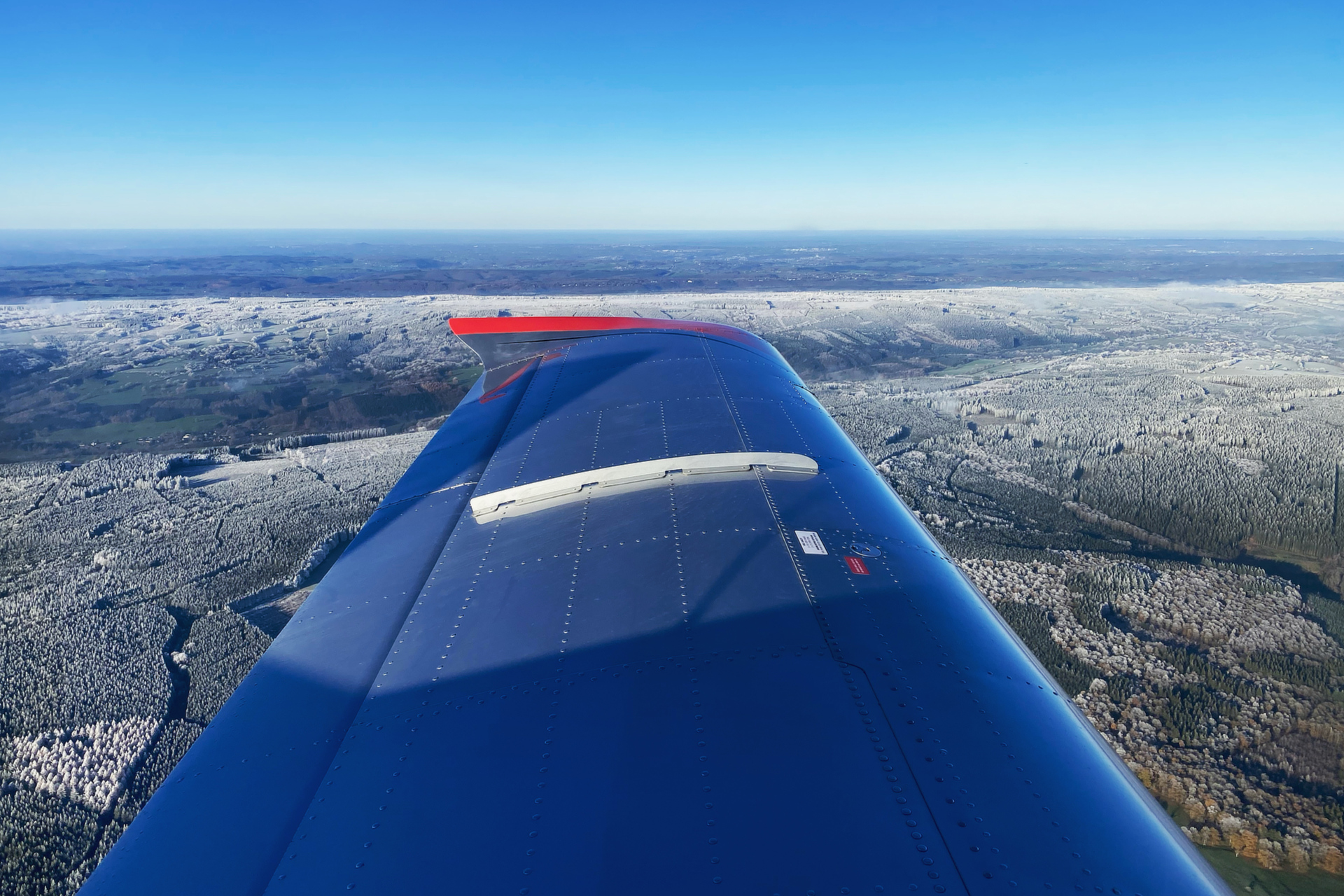 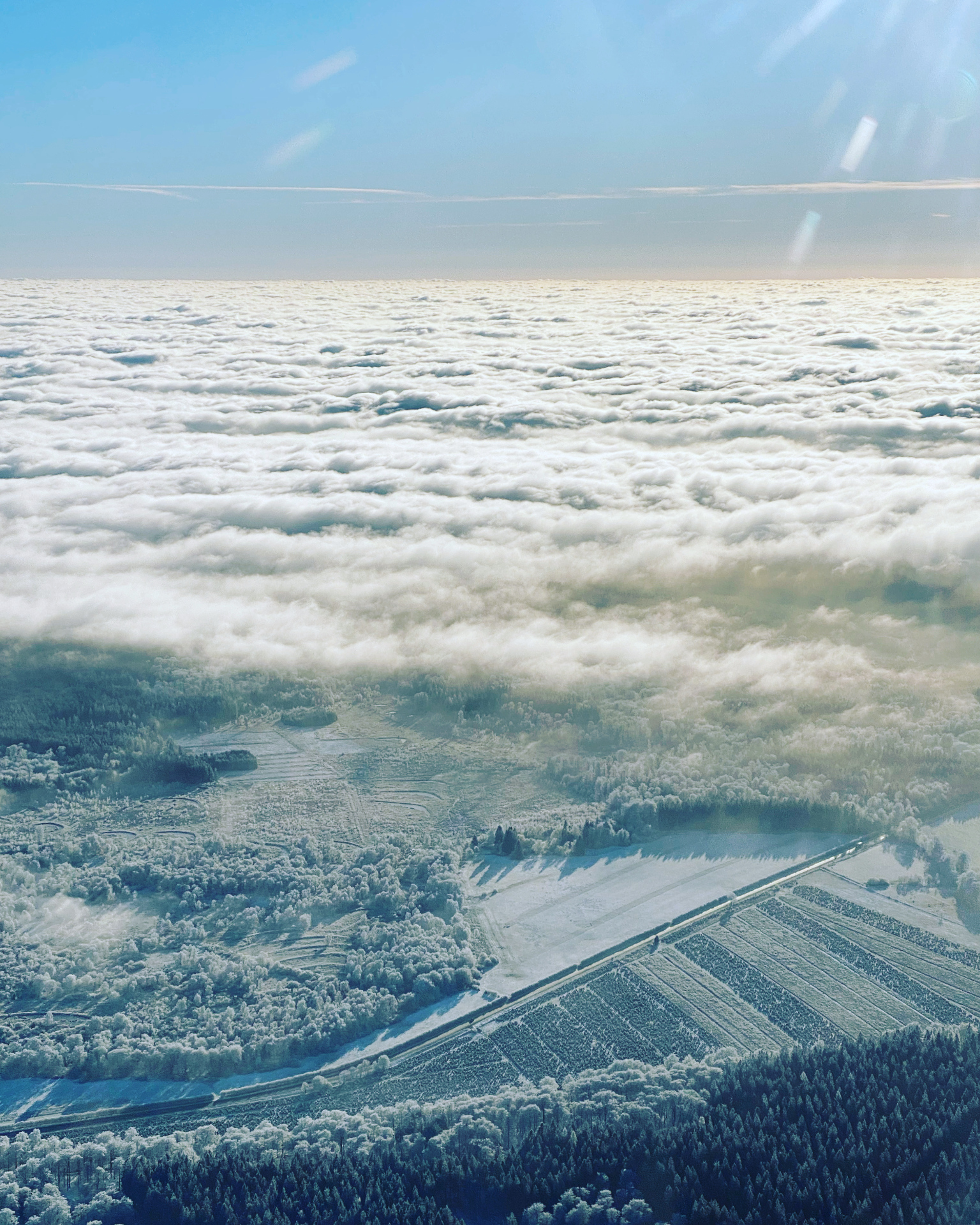 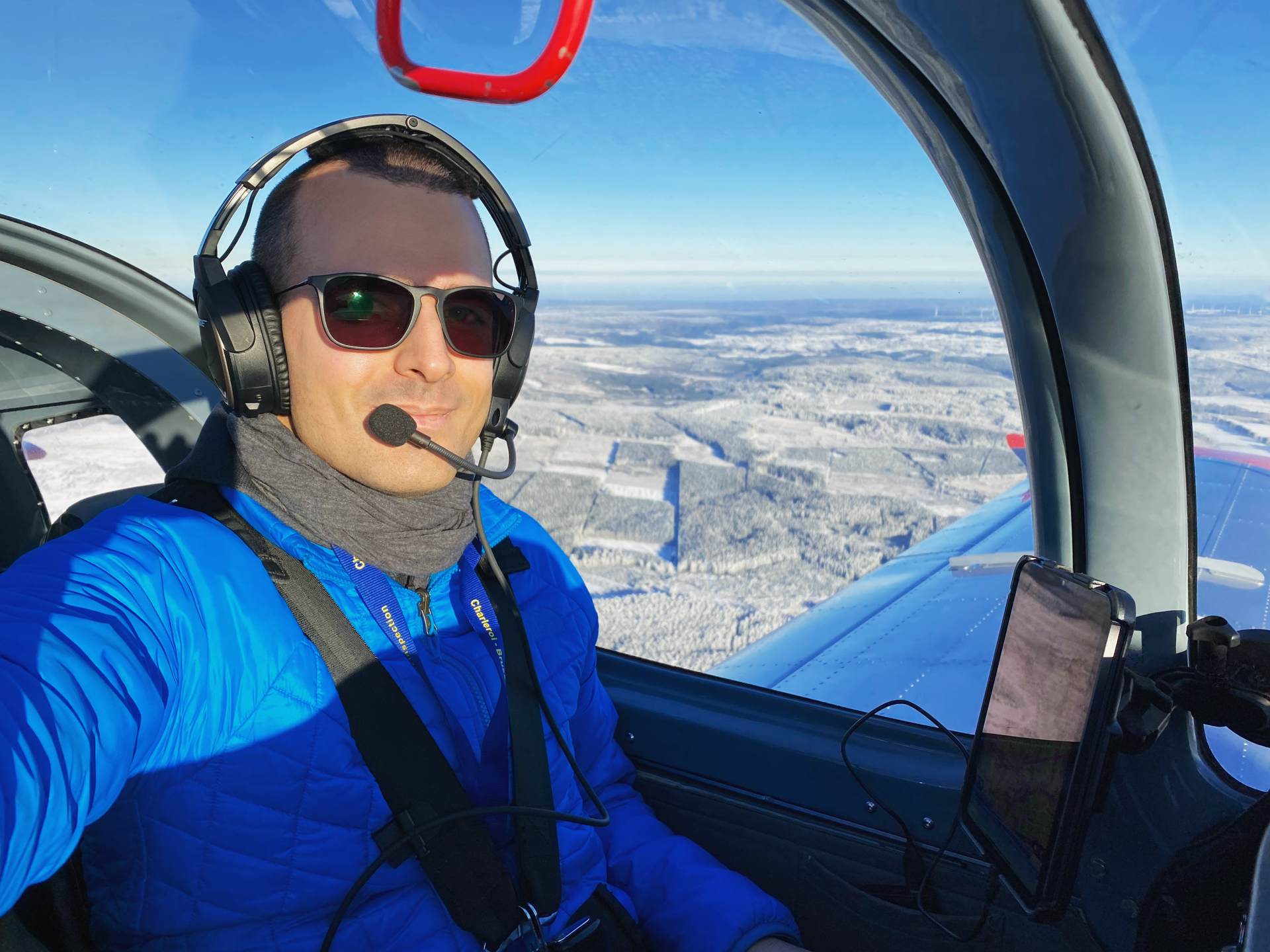