In the cold and wet months during winter, it is really unpleasant to ride the road bike outside, so you are left with three choices: 1) stop training (but come on, for three months? no…), 2) ride the indoor trainer (I will cover this in the next post), or 3) switch to track cycling indoors. I have never ridden on a proper indoor track before, though I rode one of the oldest (but outdoor) velodromes of Europe in 2009, just before I left to Belgium. But riding indoors, on a shorter, steeper track with wooden surface is really different. That’s why we (myself, plus Tijl and Kristof – the same colleagues who joined me when I rode to catch the Tour de France last summer) decided to go for a ride in the Vlaams Wielercentrum Eddy Merckx in Gent. They have specific hours, when “recreational” cyclists can just go there, rent track bikes (fixed gear bicycles, with only one gear ratio and no brakes), and ride for two hours (15 €, everything included). We had fixed this Monday evening (8-10 PM) in our calendars already a month ago, so we were quite excited about the ride. 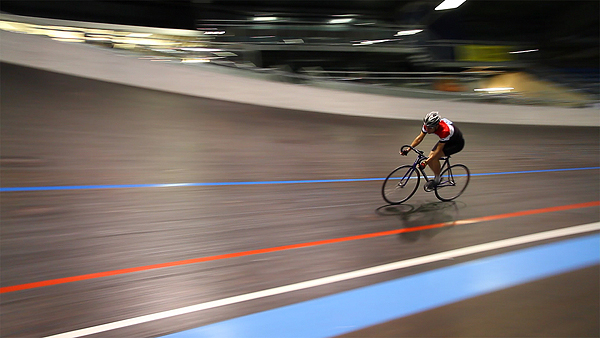 In one word, it was awesome. We got a 5 minute introduction about the rules of the track (Tijl translated for me), and then we were free to ride. Usually we just joined a group whose speed was comfortable for us, and rode with them for some time (as it is much faster and less tiring than riding alone, and it gives you the real feeling of the track). Of course we did some individual sprints too :) Unluckily, at the beginning, I had some problems with hydration levels and the amount – or lack – of food in my stomach, but I managed to overcome these for the second part of the ride. The best part – for me – was my last 35 minutes (you can see the beginning of it on the last scene of the video below), when I rode with a group which maintained a pace of 21-23 seconds / lap on the blue line (the length is 250 meters on the white line, so on the blue it is a bit longer). This gives an average speed of at least 42 km/h! During this time, I was in front twice (as the riders rotate, because the first one in the line always has to work much more, as he/she has to ride against the “wind”, while the rest is pedaling in the slipstream), and by the time it was my third turn, everyone else was dropped :) I also had my DSLR with me, so we shot some Full HD footage of the action too (all the three of us is visible, but you can easily spot me, just search for the same guy who is on the picture above):

After the ride, we had a beer (Keizer Karel Blond) – which is really typical for Belgians… You really can’t find a sports hall without a bar :D